This past February, I had the privilege of going back in time. . .

Ushered through the threshold, I was transported back to 1975 Colorado—a willing guest of the Overlook Hotel. Cobwebs streaked from the ceiling and loomed over the cracked, ivory remnants of the lodge’s former inhabitants. Through a corridor, a panel-smashed door inscribed with the bloody portend “REDRUM” (the guilty blade still hanging from the wooden puncture). Nearby, a tricycle sitting next to children’s toys. And in the adjacent lounge, Lloyd the barkeep looming over the party before him, his face a permanent rictus of malevolence stretching ear to ear. This grisly homage to the Gold Room is grand, it is transfixing and it’s the newest addition to the Bearded Lady’s resume of top-tier horror events. 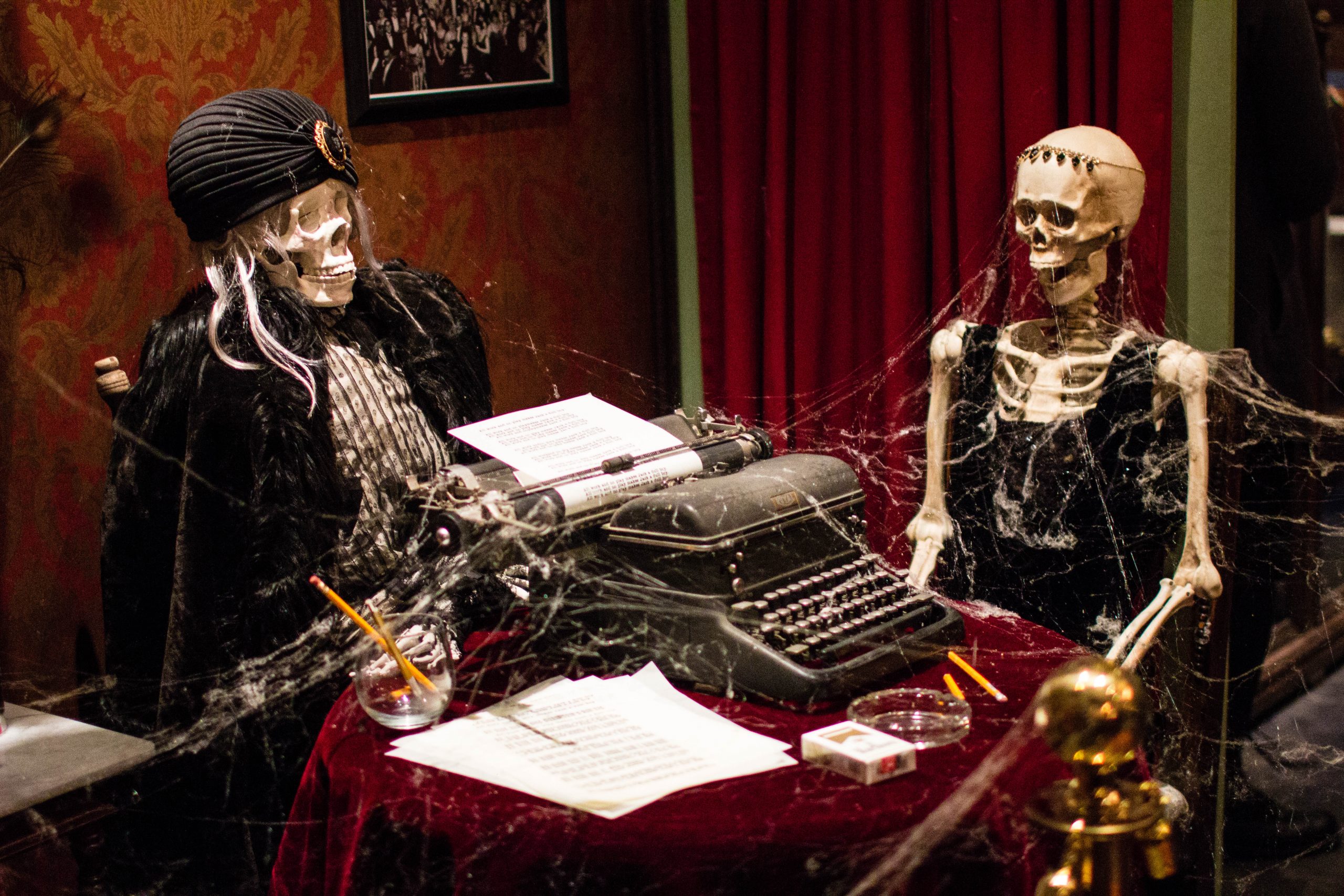 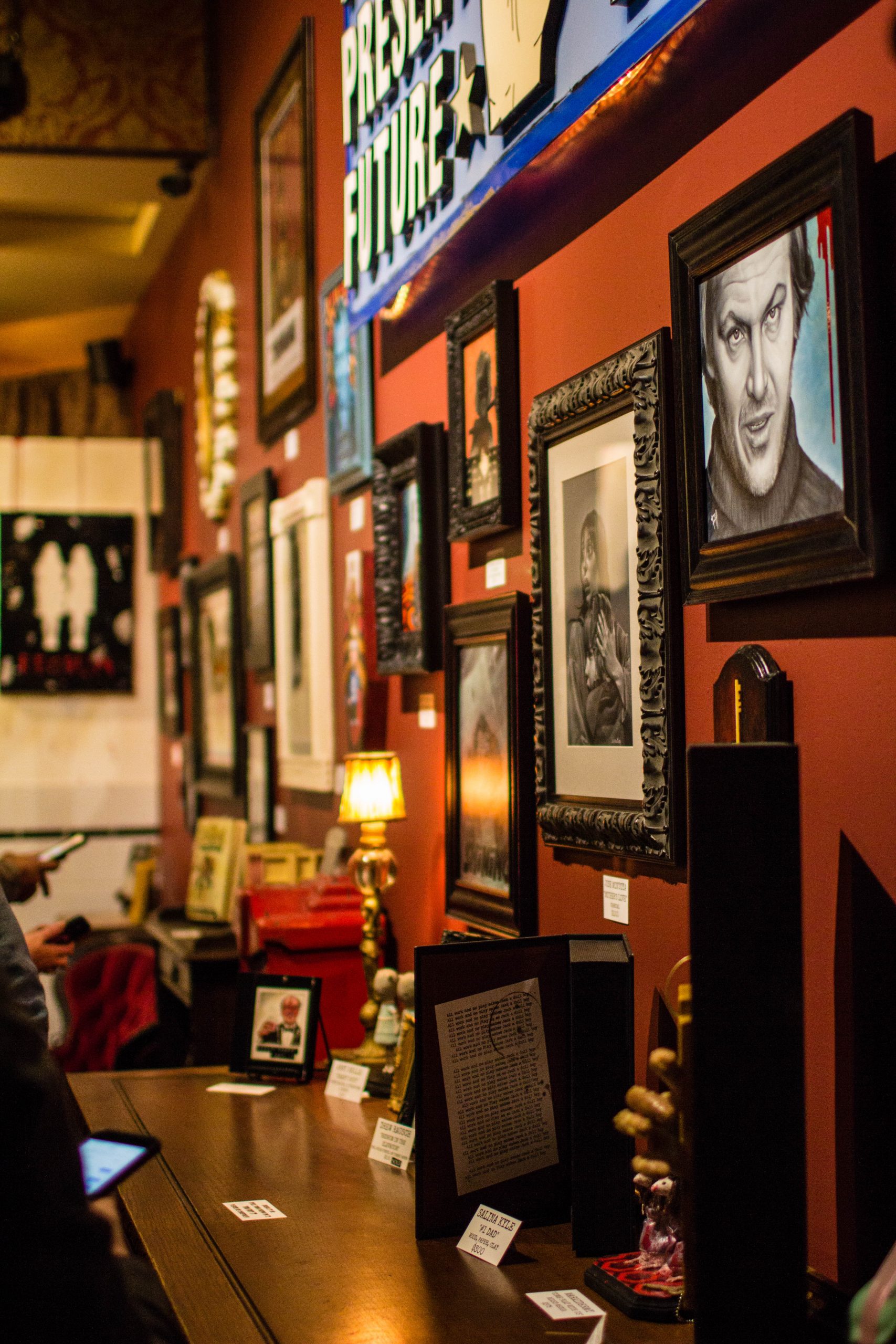 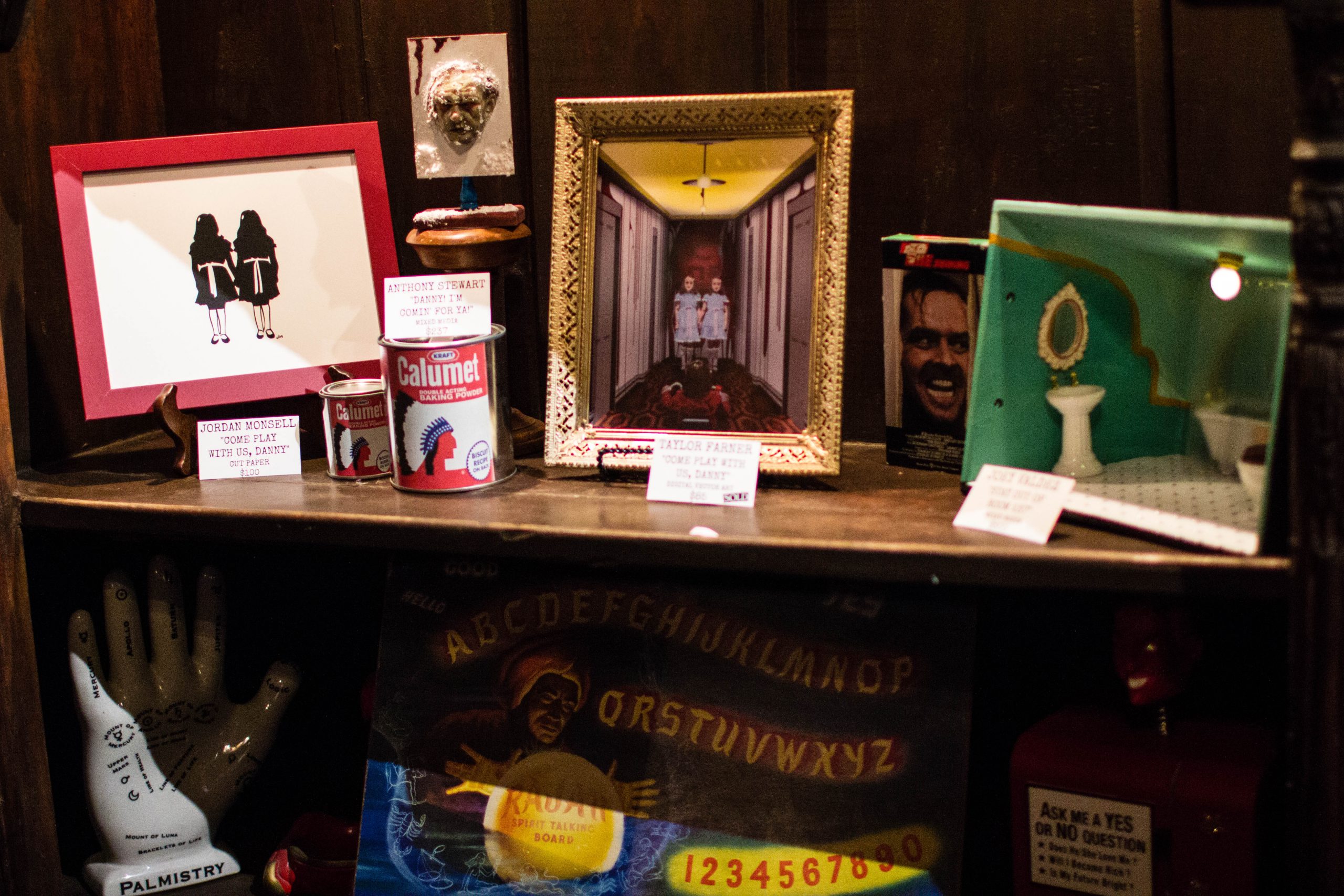 Burbank, California. It’s known for many things. . . Warner Brothers’ studio and its infamous water tower, little Kevin Arnold’s house from THE WONDER YEARS, and even a classic filming location for BACK TO THE FUTURE. But under the cinematic veneer, Burbank is also home to an ever-burgeoning community of the macabre. Among these morbid locales, is that of the Bearded Lady’s Mystic Museum; a wondrously unconventional shrine to the far-reaching realm of horror. 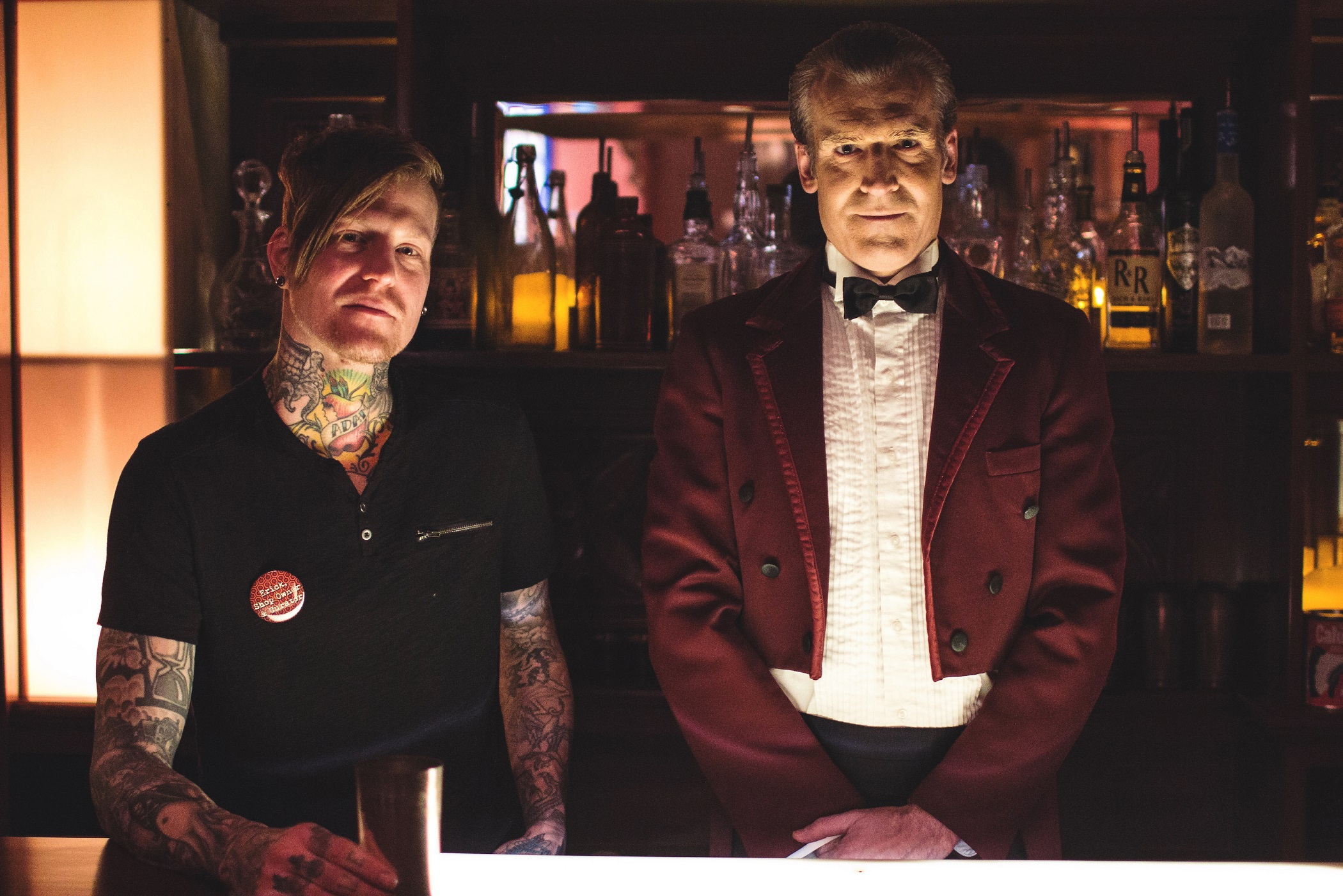 (From left to right) Erick Wessel enjoys a drink with the Golden Room’s Lloyd.

Founded/operated by Erick Wessel & Akiko Bailey, and aided by co-owner Stephanie Joens, the Mystic Museum is very much a tale of two enigmatic emporiums. One surreal side offers oddities galore. Beautifully maintained medical instruments of days long past glisten behind glass. Skeletal remains, shrunken heads and taxidermic creations of ghoulish ingenuity are on ritualistic display. A withered, white-haired Fiji mermaid lays atop a crimson cushion in full decrepit glory. Upon every shelf, within every cabinet, along every wall—there’s something fascinating to behold. This isn’t just a chamber of the strange; it’s a sanctum to death—it’s omnipresence, inevitability and the acceptance of it. 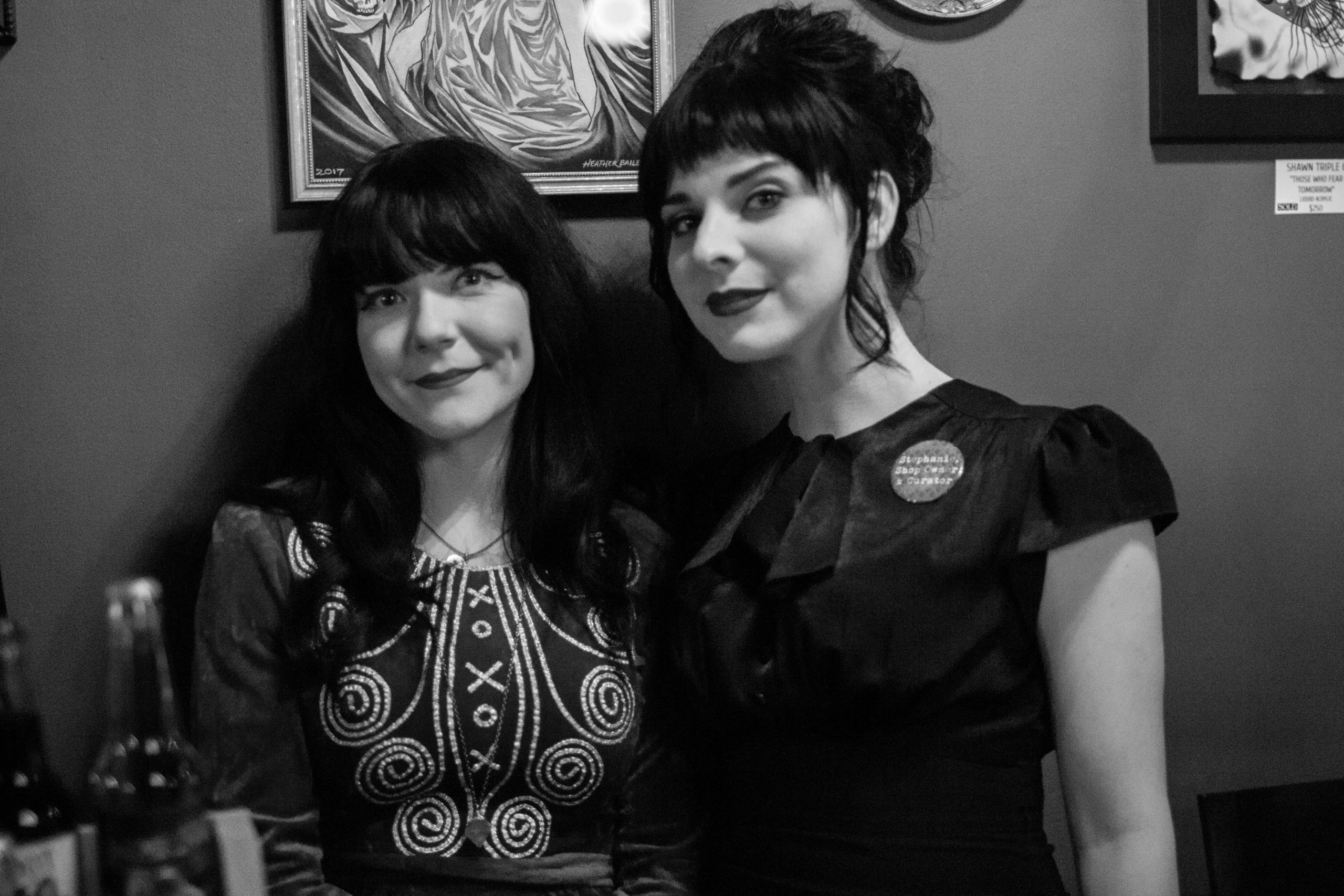 (From left to right) Akiko Bailey and Stephanie Joens

On the opposing side of the same cryptic coin, a more holistic approach. The scent of burning sage floods the nostrils and one is welcomed into an abode of candles, herbs, crystals, potions and all manner of infernal tomes. If the former half of the store could be deemed a dedication to death, this section is that of the acquiescence to it. Having experienced the supernatural herself, Bailey offers her own perspective on the shop’s pneuma. “I’ve always been interested in—and something that I experienced—seeing spirits and having premonitions. It kind of just made sense to make a store of it and also, just a place for other people who are like-minded and have also experienced the same, to come to our shop and be a part of it—to learn from one another”. Herein, there’s a palpable sense of spiritualism; a calming tranquility to all of the arcane, and a more meaningful understanding of it. The melding of these relating halves forms a unique whole—one that’s audacious, well-intentioned and educational. 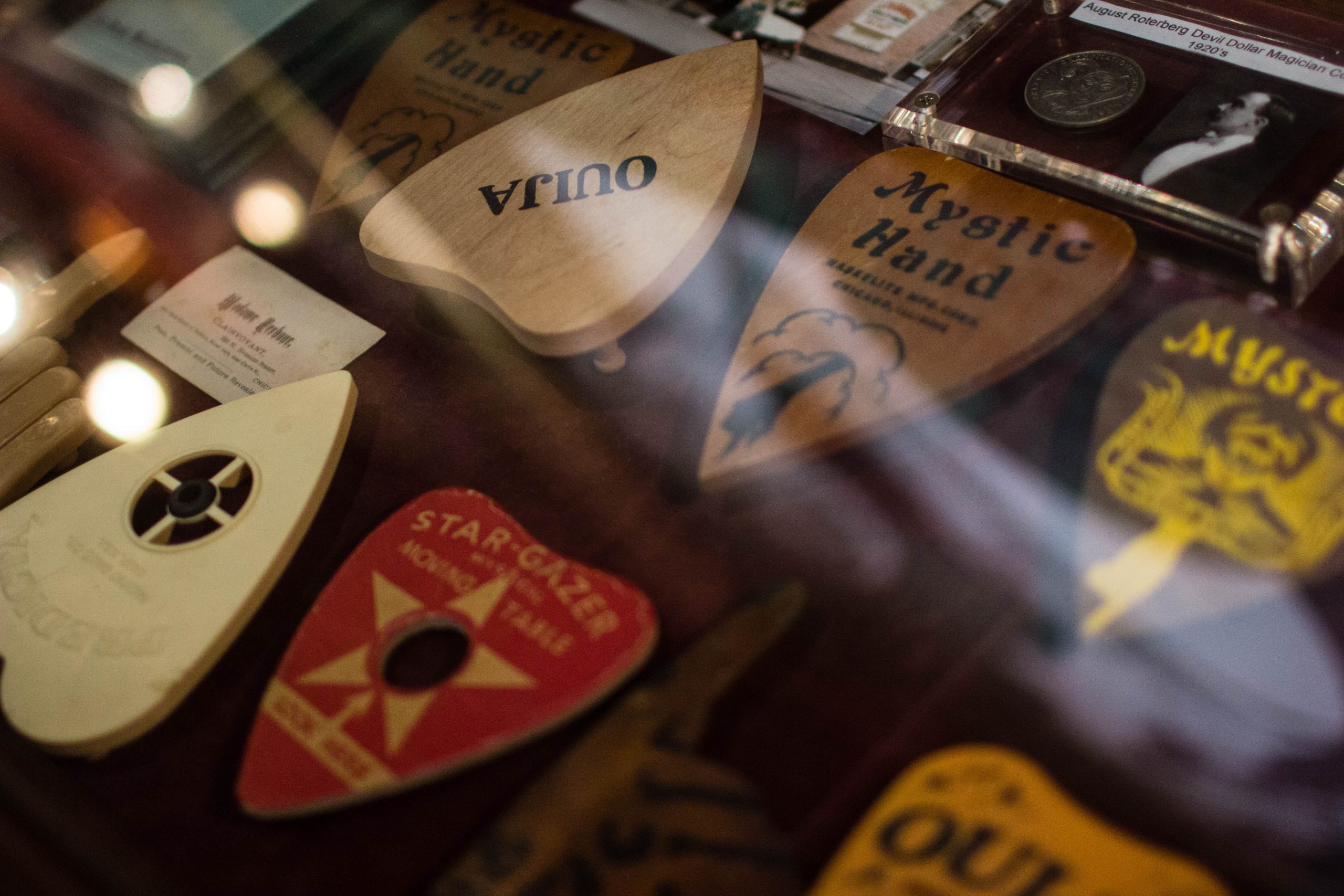 But even with all of the mysterious offerings, there’s more going on beneath The Bearded Lady’s enigmatic whiskers. Wessel states, “It’s definitely a safe space for people to have alternate religions—witchcraft, paganism, Wiccan. So we just wanted to have a safe space for everybody—even if they’re just getting into it.” Initiated as a vintage shop, Wessel and Bailey were quick to evolve their concept in order to gain better notoriety among the many epoch-related emporiums in the area. What began as period-specific clothing and decorations, further developed with the inclusion of circus (side-show) themed oddities (hence The Bearded Lady moniker)—but with a Victorian sense of style. Each brought in their own abstruse collections of the strange and paranormal, ultimately becoming what it is now: one of the most transcendentally distinctive shops on the Magnolia strip. 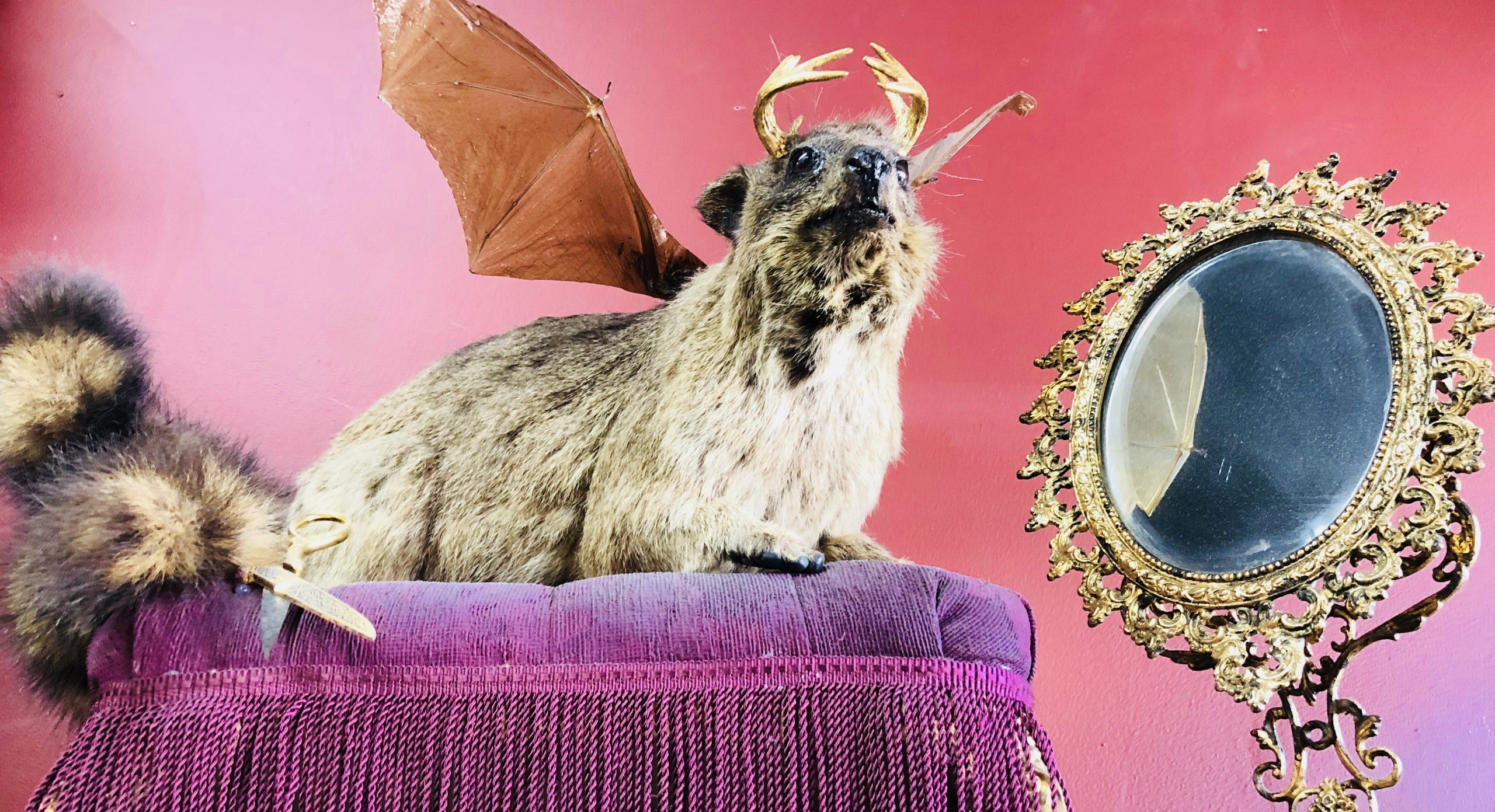 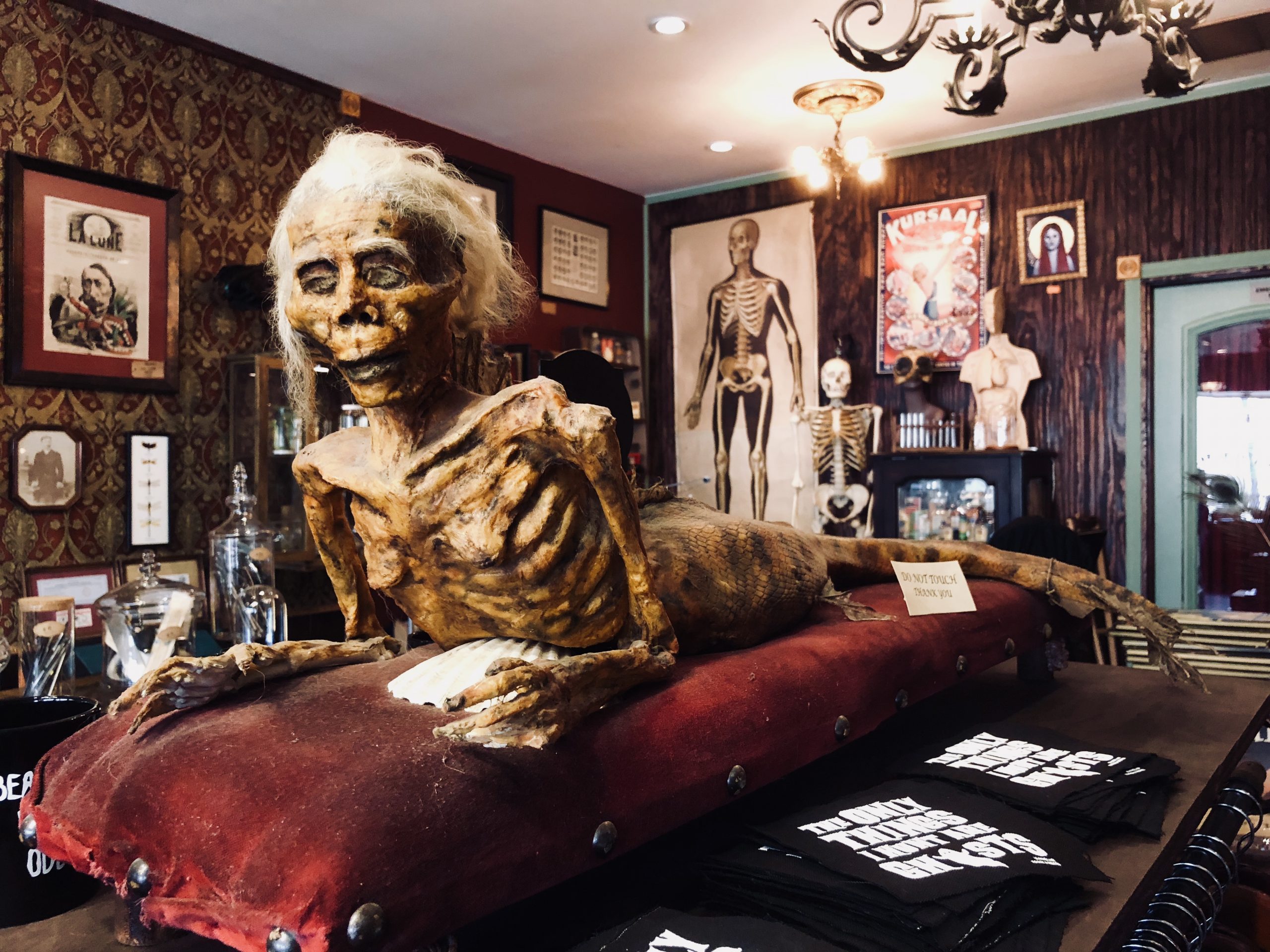 Unwilling to yield their aspirations, this trinity of spectral talent have also made The Bearded Lady a home to those with unconventional belief systems. In an effort to be more community-oriented, Wessel, Bailey and Joens have developed programs for the adventurous, spiritually-inclined, or simply, the curious. There are classes on tarot, divination, necromancy, conjuring, spirit communication and even the first “girl scouts of witch craft”, appropriately deemed “Club Coven”. Handled as either group meetings or multi-part dissections, these courses have been created as an educational means of involving the vicinage, the religiously wary, and the avant-garde yearning to exist within a judgment-free zone. 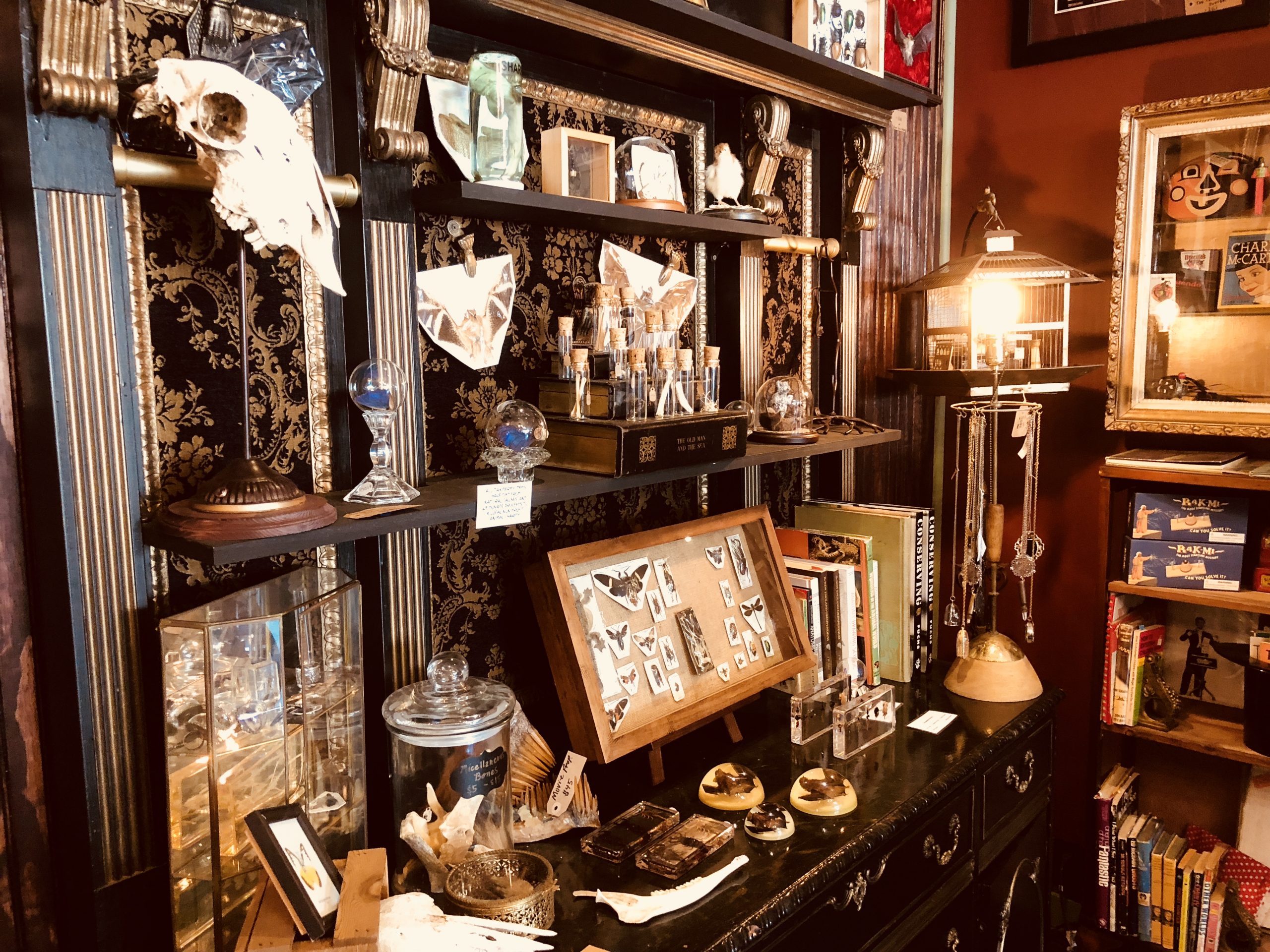 These social gatherings extend to the wildly ambitious events which have seen upwards of 2000 people at once. Particular attractions range in theme from THE TWILIGHT ZONE and this article’s THE SHINING, to that of spirit-board exhibits and an epic recreation of the VHS shops of yore called “Slashback Video”. These installations are not only eldritch sights to behold, but are also integral showcases for new artists to display their own eerie pieces—be it painting, drawing, sculpture or maquette. As if this wasn’t enough, patrons may also take part in ghost hunting, fortune telling performed by the shop’s own Mystic Dillon and even an upcoming series (soon to be a podcast) designated “Craft or Crap” in which they debunk or validate movie/television depictions of the occult. Additionally (and surprisingly), portions of their profit are donated to a canine shelter and as a principle, their establishment is only willing to take preserved specimens if they perished by cruelty-free means. That whole adage about judging a book isn’t any more relevant than with the inhabitants and exhibits of the Bearded Lady. 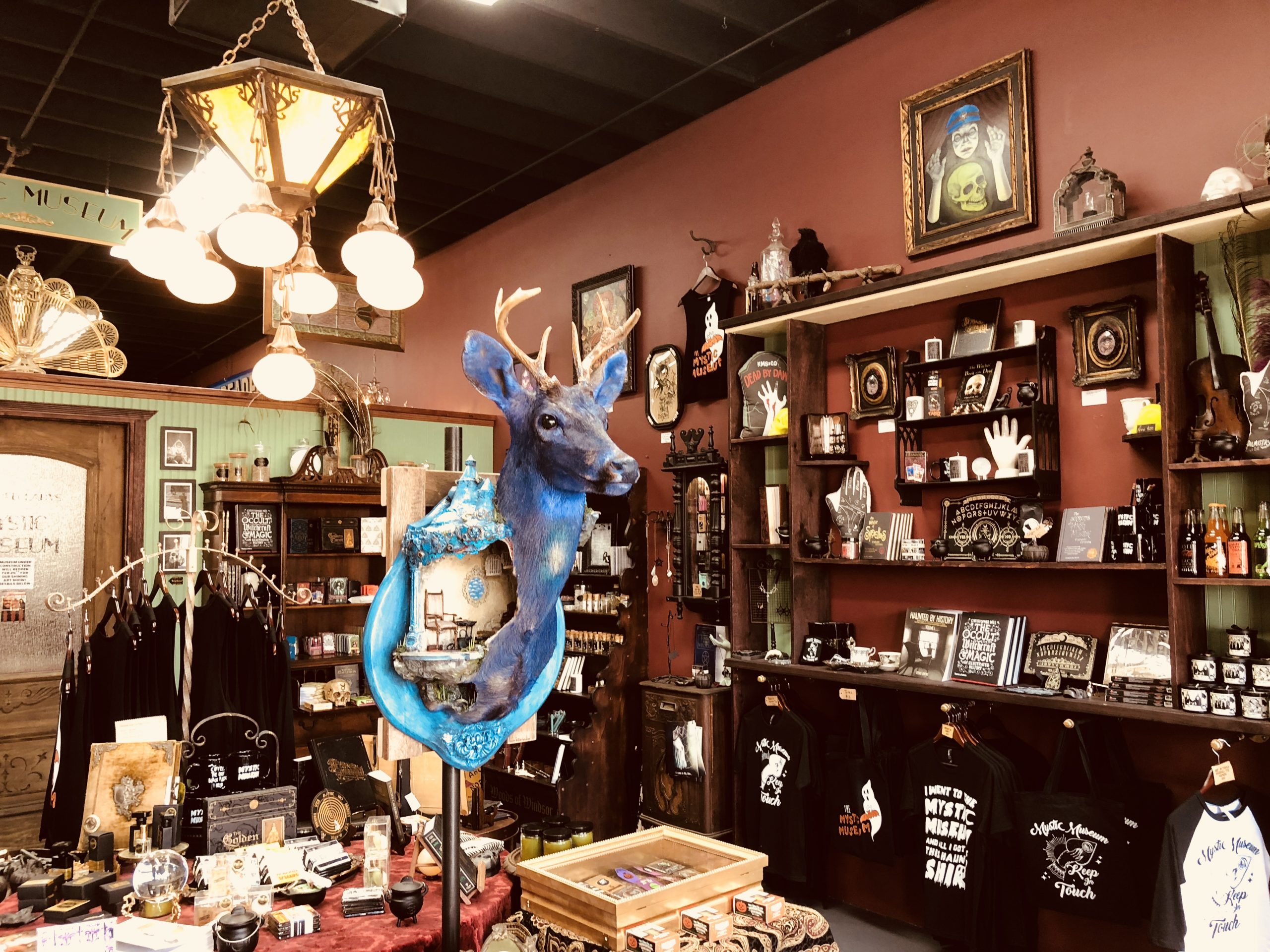 By the end of my stay at the Overlook Hotel, I checked out with the knowledge that I would surely be back. While I didn’t suffer a deluge of ichor from the open mouth of an elevator; nor was I beckoned into a bathtub by a seductively rotting ghoul—there’s always the next visit. And I can’t wait to see what horrifically inspired gathering the Bearded Lady’s Mystic Museum has in store for me upon my return. 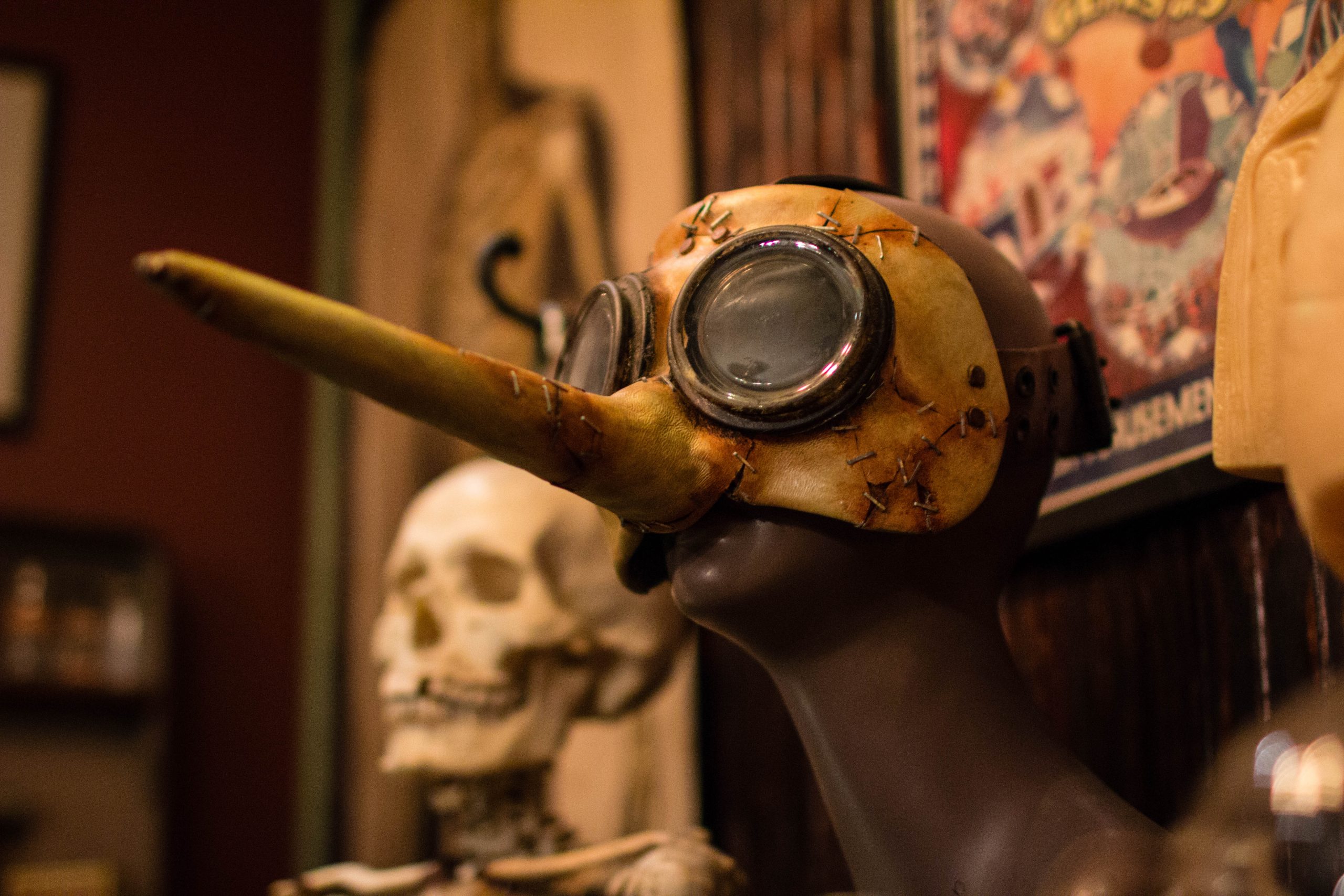 For those hoping to learn a thing or two from the otherworldly (or for those just agog), you can check up on all of The Bearded Lady’s upcoming attractions and activities below. 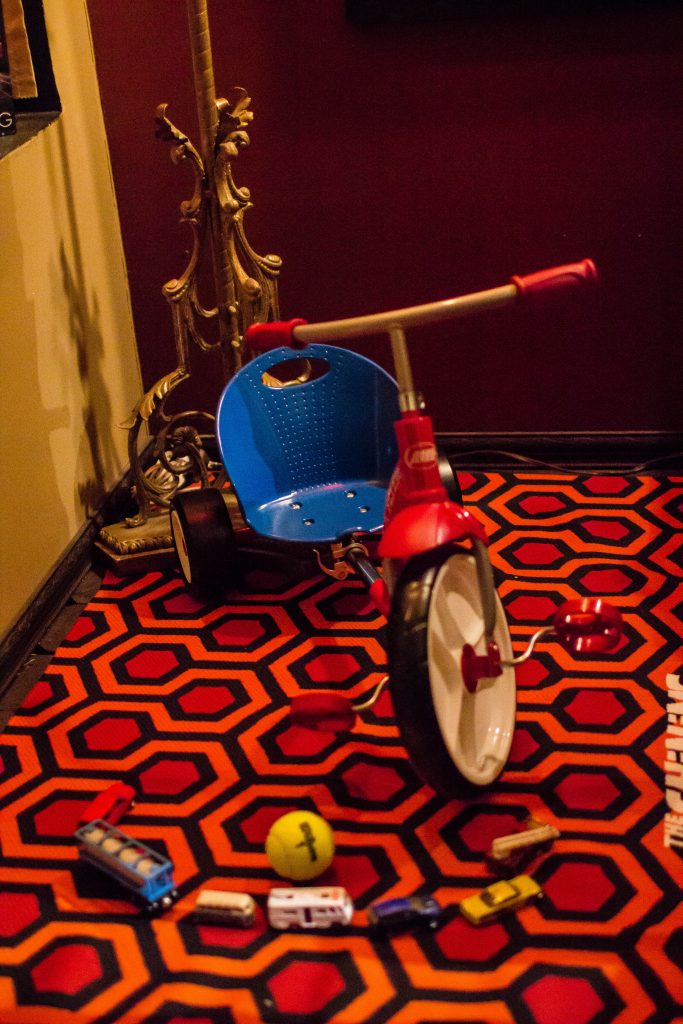 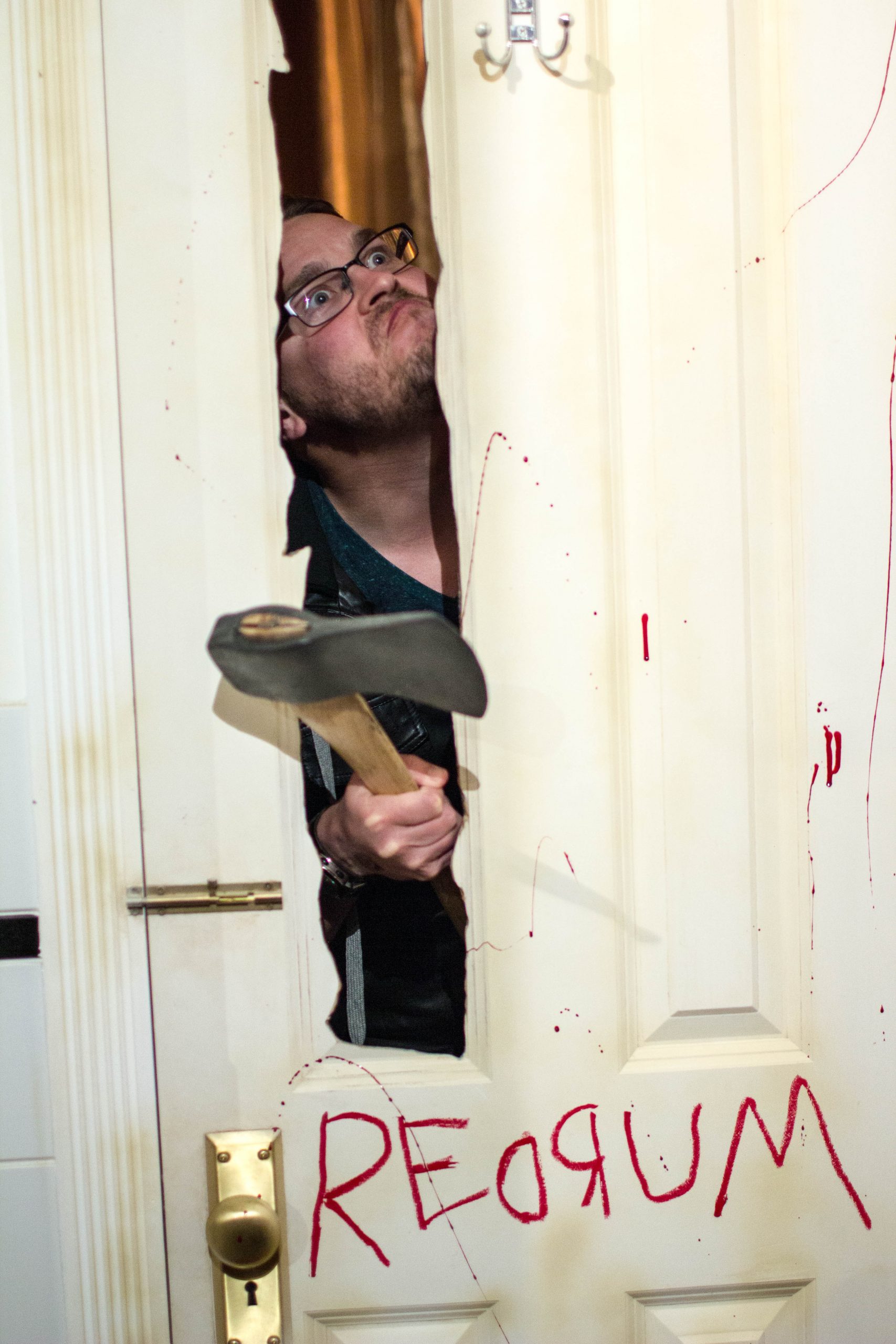