Mutant Fam; what a name right? Since I knew I wanted to write this article that phrase has been swirling around in my head, and it got me thinking about what it was to be a mutant. At first, I picked that phrase because I was physically designing hillbilly mutants for Joe Bob’s Drive-In of Dread, Sunday’s event at the Jamboree weekend. While walking around throughout the event and seeing all the different types of people that were coming together to be here and celebrate what’s known on Twitter as the #MutantFam, the phrase was taking on a life of its own. 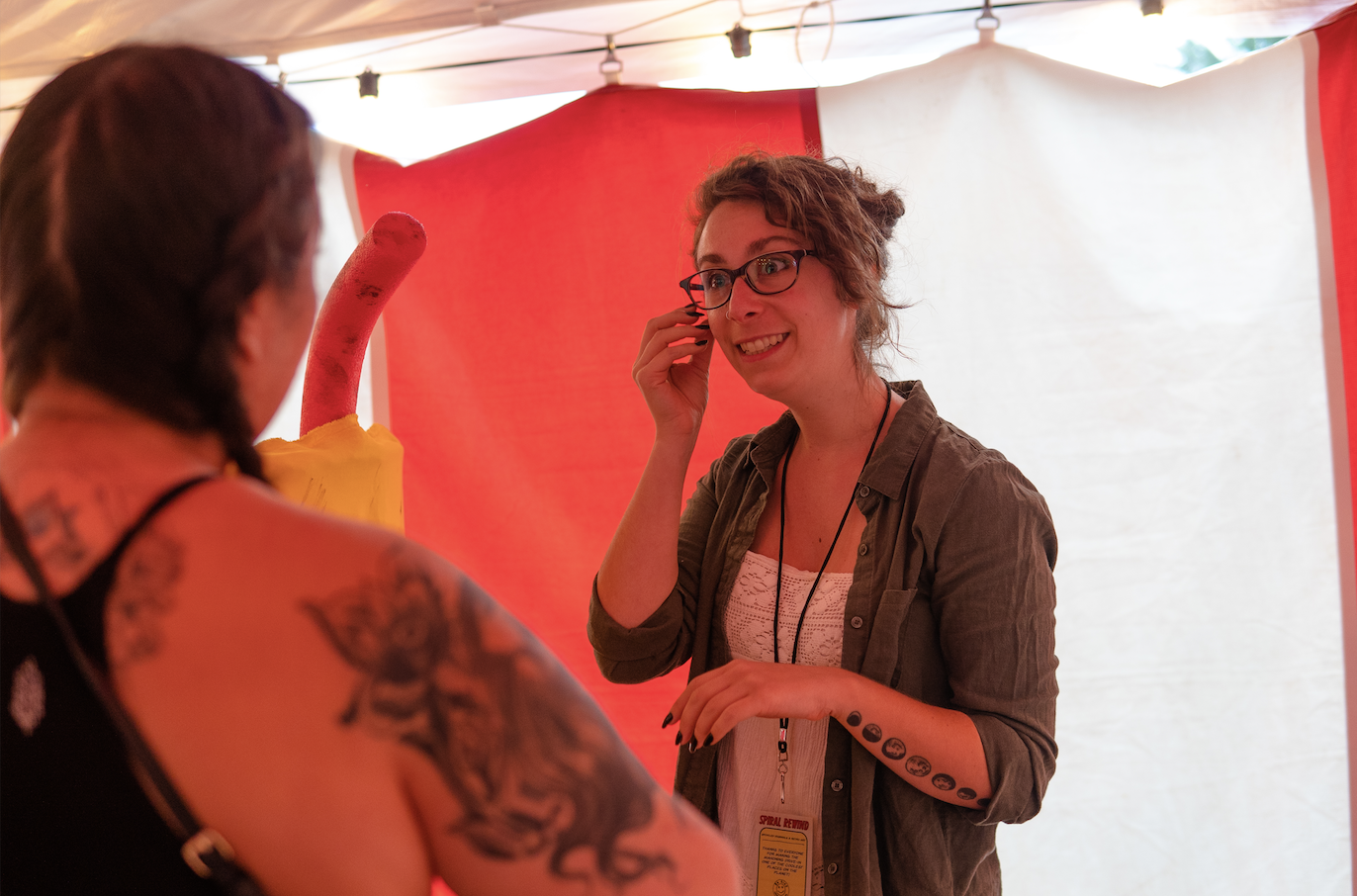 My way into this project started way before the weekend itself. Being the designer and wardrobe supervisor for the series, my team and I knew that we needed to give the fans a piece of the show, while also leaving them with nothing they can experience from their couches. I talk frequently that to be a Costume Designer in any capacity is to be a Jill of all trades, if you will. We are the last piece of a conceptualized character coming to life off the page. Working with our own knowledge of the story and our visions and marrying that to how the actor sees themselves. When building a haunt, however, your audience has less time with each character, and the story is not always being considered. Since this is, after all, The Last Drive-In, the films and what Joe Bob has to say take precedent.

The incredible Doug Sackman, who was the makeup designer/coordinator, and I sat with Darcy and Austin Jennings to really understand what story Joe Bob wanted to tell in between these films. The Mahoning Valley, where the Drive-In sits, created a perfect backdrop for evil animal-human hybrids coming through the woods to terrorize the patrons who come to watch two classic horror films, Them! (1954) and House of Wax (1953). It took about two months of planning and tweaking certain aspects to end up at the final product for what we brought to the guests. To tie in the vintage Drive-In aesthetic, I also wanted to create two mascots that were mutated, in a different way. Based on some of the original concept art put forth by JT Mills from the Mahoning staff, we developed the idea to make two anthropomorphic snacks, a soda cup, and a box of popcorn. In part to challenge myself as a seamstress. 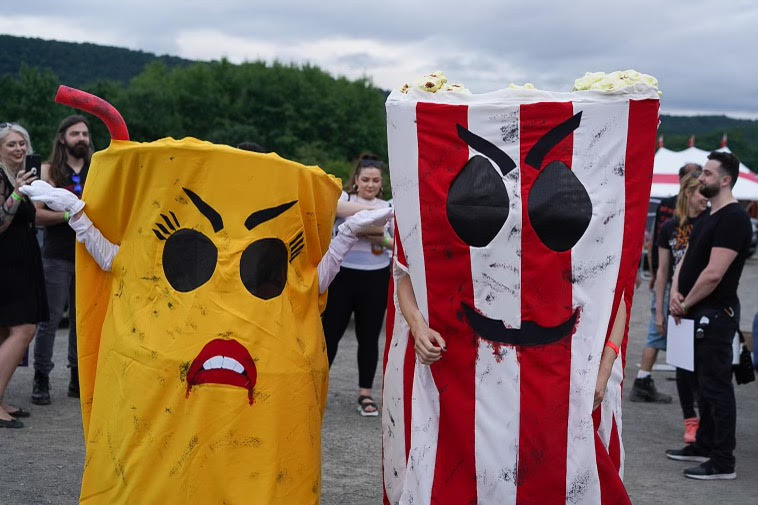 A spooky soda and creepy popcorn terrorize guests at the Mahoning Drive-in.

With our concepts locked in and materials bought we were underway to make it to the Jamboree. By mid-June, we shot our inserts that would play out for the guests on the big drive-in screen. The format of our show: as Joe Bob conducts his regular program from inside the projection booth at the Mahoning, the Hooded Harbinger of Doom comes in to relay bad news to him and Darcy about the mutant families that live in the surrounding woods.  Building for John Brennan is such a treat, as he donned the hood for this occasion. He is usually our craziest characters, and after I turned him into one of the “muck men” for our Spookies rap (with the help of makeup artist Ashley Thomas) there is no limit to what characters he’ll adorn. Sometimes you must step in and wear your own designs. When creating the Ma and Pa Stanken couple that were to be exterminated by JB himself, I had no idea that I would be filling the role of Ma. Based on the painting American Gothic by Grant Wood, these mutant forms of an old farming couple were just some of the creatures that Joe Bob and Darcy must fight off. It had been years since I’d done any sort of acting or put any prosthetics on, and a long while since my haunted house days, but I had a blast playing opposite Leon Schelhase. Thankfully, all I had to do was stand behind Joe Bob and try not to laugh!. Amanda Blake (@amandablakefx) and Ruby Muro (@rubymurofx), were on hand as our special effects make-up artists, and my gosh they killed it. As the live event was quickly approaching, I spent my days, with the help of my mother, who is the best assistant I could ask for, building these mascots and distressing my mutants.

Pulling up to the event on Friday, July 16th, I could feel the energy of the fans. Now I have attended horror conventions before, but this was different. There was a comradery that was felt through every attendant, vendor, and staff member. The feeling that we are all a part of something bigger is what horror gives to its misfits, and even more so what The Last Drive-In gives to its fans. Every Friday during the season, people from across the country gather in front of their televisions, make special meals, crack open Lone Star beers, and tweet along with Darcy and the crew during the zaniest four hours of television. You could feel how much the fans had been waiting for this. Friday’s weather was unfortunately not on our side and the drive-in quickly became running streams of water across mud and grass. Some programing needed to be adjusted to fit the weather, but you could tell that the fans did not mind. 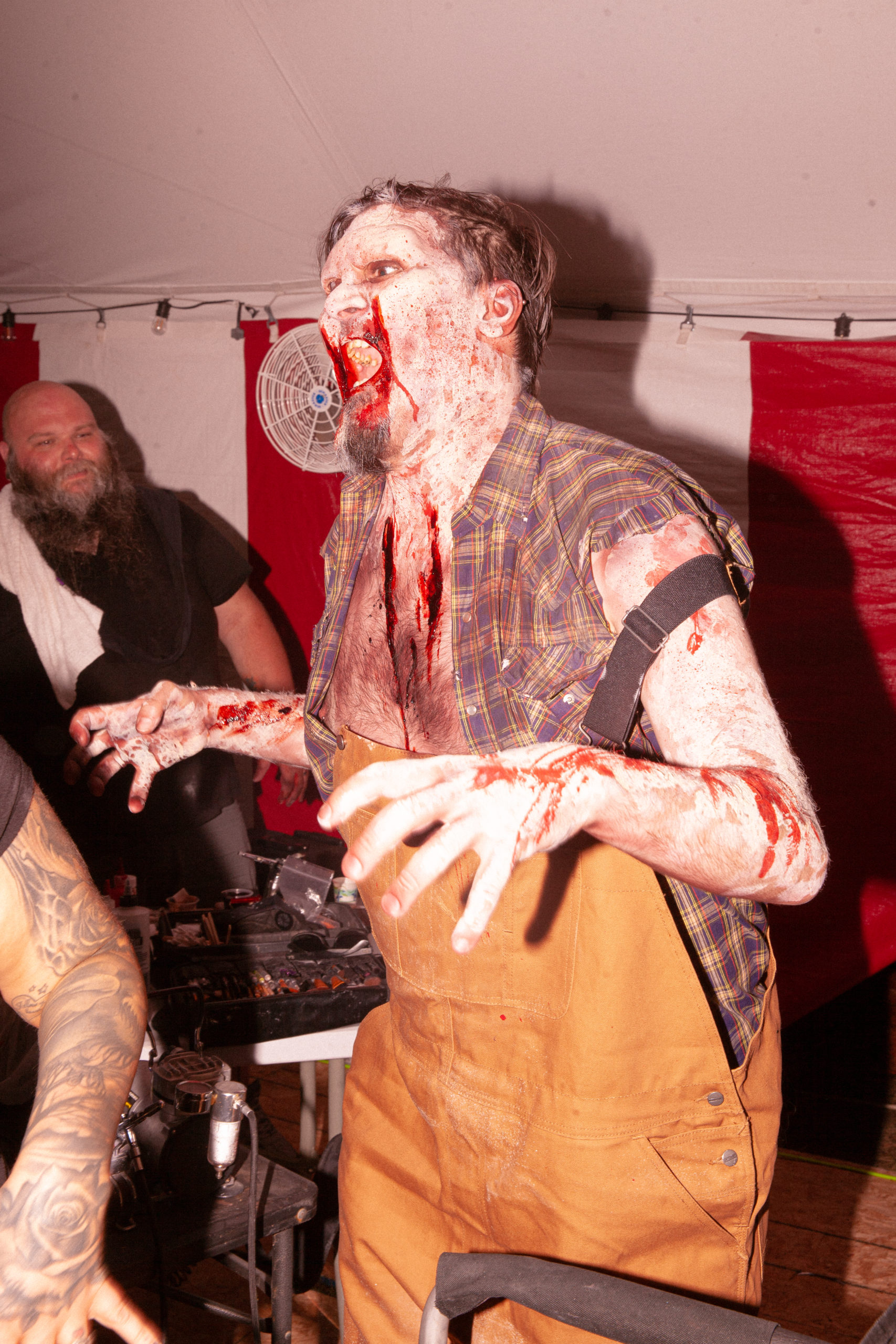 With soggy feet, the crew got to work quickly on Saturday for the taping of our live show, which will be premiering on Shudder at a later date. By 10 am, the fans began to stake out their spots on the lawn to watch a process that we have only intimately done within the confines of our studio up to this point. Watching John Brennan and the Bigfeet perform the theme song live is something I will never forget, and watching joy cross the faces in the crowd even brought me to tears. This is why I love my job and do what I do. To be a small fraction of something that brings people so much joy is a gift. What I have learned over my years in this business is that there are a lot of people out there whose only goal in life is to serve their ego. Fine, if you want to live that way who am I to stop you, but you can tell that my colleagues on this production do this because they genuinely love what they do. We love bringing people crazy and obscure horror movies and watching everyone connect with what Joe Bob and Darcy have to say. Without getting too sappy, I will say that I am honored to work side by side with Austin Jennings, Justin Martell, Matt Manjourides, John Brennan, Aimee Kuge, Kevin Quigley, Seager Dixon, Ashley Thomas, and so many others who make this show possible.

With the exhaustion of the previous day still nipping at our heels, we came to The Mahoning on Sunday afternoon for the last day of the Jamboree. I buzzed with anticipation over how the fans would receive these characters.  I forgot what it felt like to anticipate a live event. Pre-Covid, I worked Off-Broadway running wardrobe nightly. While a haunted attraction is different than live theatre the pre-show work that needs to be done is the same. I also had to make sure my framed characters were ready to go out, as I had to get creative with packing them into my car to get them there. I was thankful that the heat wasn’t too extreme and that I didn’t hit too many bumps in the road (literally and figuratively) because the frames that I constructed did not have any damage. 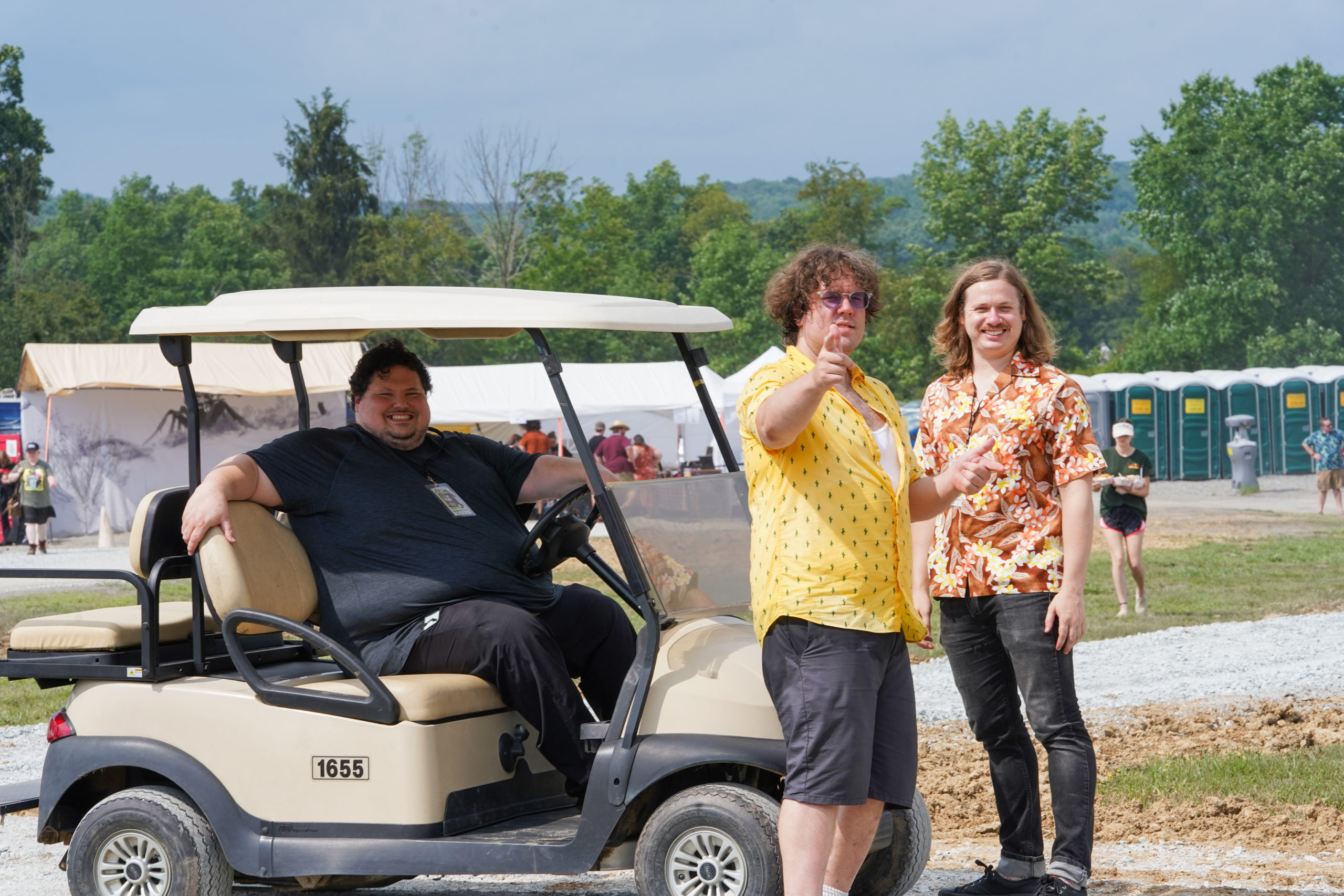 As soon as Amanda Blake and her team showed up, we were able to really hit the ground running. The team she, Ruby, and Doug assembled for this event was filled with unmatched talent. All alumni of the various haunts around the country, they each brought a unique vision and style to the characters. Makeup and costumes work so closely together in this genre that you cannot have one without the other; we artists each provide that last layer of skin for the actor to completely transform themselves and truly become. You start to see the personalities come to life in the chair and when they step outside of the dressing rooms. It is a magical moment and one that I am thankful to bear witness to. Sending out each character to run amuck among patrons really allowed the drive-in to come to life. You could hear screams off in the distance, laughter, and even saw some attendees stopping to take pictures with our Mutants and Mascots. As a designer for film, you do not get to see the reactions of the audience as they are experiencing it (you might get tweets or messages later) but to see them engaging with these characters solidified that we made the right choices.

To reminisce back on that weekend and see fans posting their photos online really brings home how important these fan cultures are. To be a mutant is to be an outsider, a weirdo, but to have a space to come together and revel in what it means to be a mutant with other mutants makes you feel less alone in this world. Now more than ever, having spent over a year in isolation, gathering in this way was exactly what we all needed. Weeks have passed since the event and fans are still talking about it. So yes, I got to spend a weekend with my mutants, the ones I made by hand and crafted months before, but I also got to spend the weekend with the mutants we all created. Ones who are inspired by Joe Bob and Darcy and the love that they put into this show every week, the ones who call us home because we are the only ones who understand them.  Sometimes I must pinch myself because I cannot believe that this is my job. 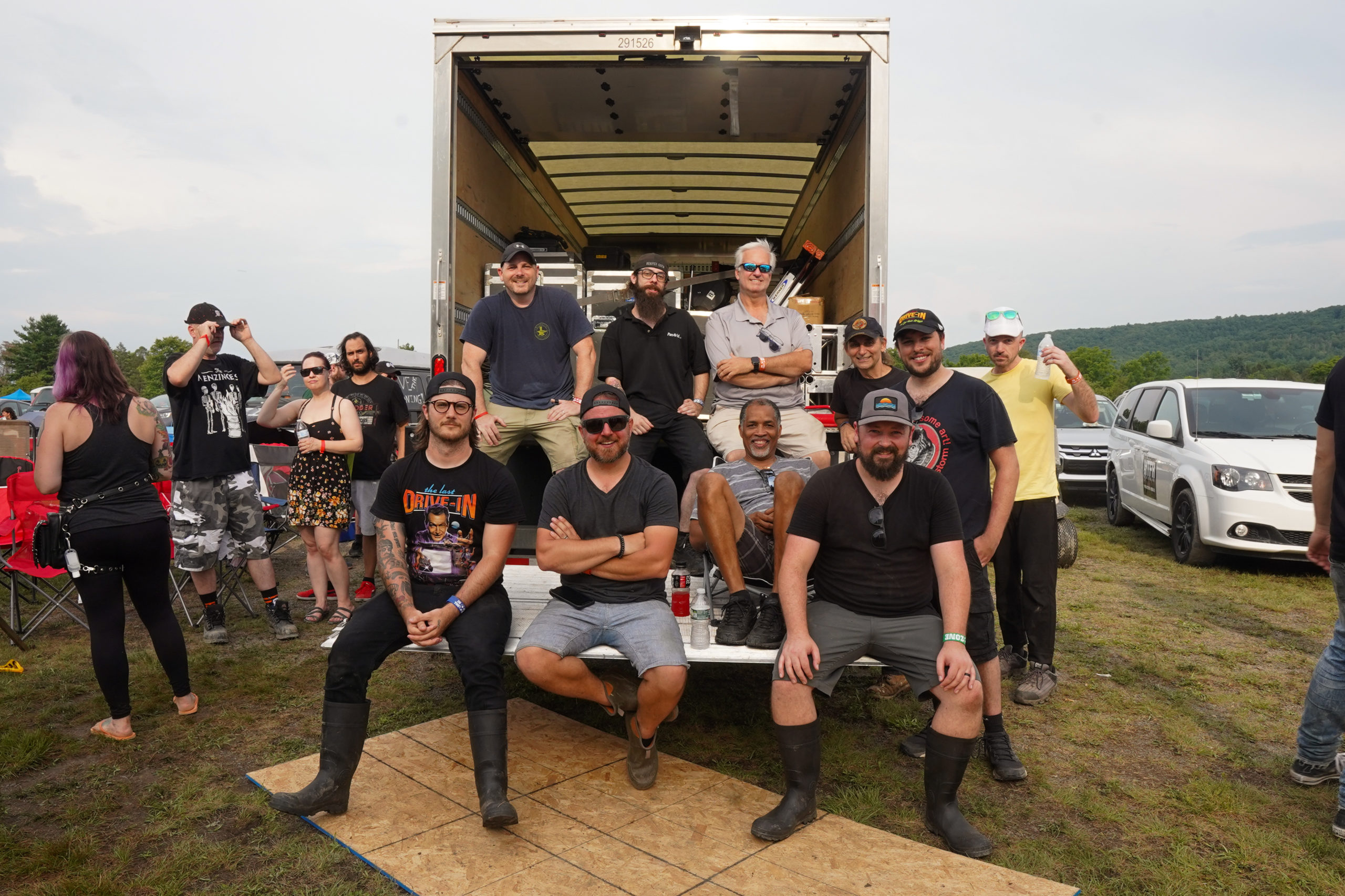 Some of the Last Drive-In Jamboree crew.