Beyond Fest Returns With A Stacked Slate of Incredible Genre Films

Beyond Fest, the highest-attended genre fest in the U.S. has just unveiled a ludicrous slate of incredible screenings to mark its return after its 2020 drive-in edition. The festival will be taking over L.A. once again with 39 features (including 8 world premieres, 4 U.S. premieres, and 17 West Coast premieres) screening across ten days at various theaters throughout the city. Read on for the complete rundown!

Beyond Fest, the highest-attended genre film festival in the US, is excited to announce its complete slate of 2021 programming comprising 39 features, including 8 world premieres, 4 US premieres, and 17 West Coast Premieres. Following a sold-out residency at the Mission Tiki Drive-In in 2020, Beyond Fest returns to theaters for 10 days of cinematic excess from Wednesday, September 29th – Monday, October 11th. Built in partnership with the American Cinematheque, Beyond Fest will screen at the Legion Theatre, Aero Theatre, and Los Feliz 3 with all ticket sales going to the 501c3 non-profit film institution. Attendance to all screenings require physical proof of vaccination and guests must follow mandatory mask mandates.

With a diverse slate celebrating the most transgressive cinema, Beyond Fest is proud to open with the West Coast Premiere of Julia Ducornau’s Palme d’Or Winner TITANE at the historic Hollywood Legion Theater with the director in attendance. This screening also represents two world-firsts with TITANE playing in-theater for the first time on a never-before-seen 35mm print, while a drive-in screening simultaneously takes place outside.

Horror heroes Blumhouse return to Beyond Fest with two of the year’s most-anticipated features: HALLOWEEN KILLS and THE BLACK PHONE. Director David Gordon Green and producer Jason Blum will join in-person for the US Premiere of HALLOWEEN KILLS and participate in a post-screening Q&A that will be livestreamed globally as the culmination of the super-producers’ annual Blumfest. The latest shocker from power duo Scott Derrickson and C. Robert Cargill, THE BLACK PHONE, delivers the scares in their adaptation of Joe Hill’s beloved ghost story. Director Scott Derrikson will be attending the films’ West Coast Premiere.

Following it’s electrifying Cannes debut, jaw-drop cinema LAMB, will receive its West Coast Premiere with director Valdimar Jóhannsson and star Noomi Rapace joining in person, and agent provocateur Gaspar Noé is once-again championed with the West Coast bow of his devastating VORTEX featuring an astonishing performance from the maestro, Dario Argento. Lucile Hadžihalilović promises to shake the audience to its core with the US Premiere of her hallucinatory and mesmerising EARWIG, and acclaimed director Bernard Rose will be in attendance with his cast and crew for the world premiere of his latest film, TRAVELLING LIGHT. We descend into the frighteningly brilliant world of V/H/S with the West Coast Premiere of the brand new V/H/S 94 with talent in attendance, and an incredibly rare 35mm screening of the franchise’s original shockfest, V/H/S.

“Despite all of the adversity of the last 18 months, we’re incredibly thankful to have built a program that is as diverse and progrogressive as anything we’ve accomplished in our past nine years,” said Beyond Fest Head of Programming, Evrim Ersoy. “Recognizing this adversity, the generous support of filmmakers, studios, distributors, and our partners has also given us the opportunity to make over half of the program free to the film community of Los Angeles. It’s so good to be back in theaters where we belong.”

Icons of Cinema will be honored via a series of screenings over the course of the festival with the first being a celebration of four-time Academy Award® nominee Michael Mann with screenings of COLLATERAL and the 40th anniversary of THIEF with the director in attendance. VFX master Phil Tippett is joining us for a career-spanning Q&A between the West Coast debut of his highly-anticipated, magnum opus MAD GOD and his sci-fi-chef’s-kiss, STARSHIP TROOPERS. Also screening is the West Coast Premiere of the 4K restoration of Stanley Kubrick’s A CLOCKWORK ORANGE, and the legendary Udo Kier will discuss one of his most audacious roles with the theatrical World Premiere of the newly restored BLOOD FOR DRACULA. For the duration of the festival the Aero Theatre will be rebranded as the ‘MUBI Theatre’ in-keeping with the streamers’ mission to help cinema-lovers discover and watch beautiful, interesting, incredible films.

Celebrating repertory classics from the beloved to the newly-discovered with a series of screenings, Beyond Fest will be home to the West Coast Premiere of the new 4K Restoration of Andrzej Żuławski seminal work, POSSESSION, the World Premiere of the newly-discovered, never-finished until now(!) 80’s Kung-fu-ploitation NEW YORK NINJA from the brilliant minds at Vinegar Syndrome with cast members Leon Isaac, Cynthia Rothrock, and original cast member Adrienne Meltzer in attendance, and the World Premiere of the new 4K Restoration of ‘ALISON’S BIRTHDAY’ as part of a folk horror double-bill, and a very special screening of 2020’s cult sensation THE EMPTY MAN with the director David Prior on-stage for an extended Q&A.

As a give-back to the film community of Los Angeles, all Beyond Fest programming at the Los Feliz 3 Theatre will be 100% free to all guests courtesy of our friends at ‘Shudder’,the premium streaming service for horror, thriller and supernatural films and series. Rebranded as the ‘Shudder Theatre,’ we will be screening a series of hotly anticipated titles spanning the World Premieres of Aharon Keshales tough-as-nails neo-noir SOUTH OF HEAVEN starring Jason Sudekis and Evangeline Lilly and Sam Walker’s eye-popping midnight sci-fi chiller THE SEED, to the highly anticipated West Coast Premieres of SXSW sensation THE FEAST, Ruth Paxton’s bone-chilling THE BANQUET, Dasha Nekrasova’s hallucinatory Berlin winnerTHE SCARY OF SIXTY-FIRST (on brand-new 35mm with the director in attendance), extreme horror THE SADNESS, Kier-La Janisse’s definitive folk-horror doc WOODLANDS DARK AND DAYS BEWITCHED, the Midnight Madness breakout SALOUM, in addition to three shorts blocks celebrating up-and-coming filmmakers. The Los Feliz 3 will also be home to a very special secret screening of XXXXXXXXX from the legendary director XXXX XXXXXXXXX.

Celebrating a commitment to the most transgressive cinema we have curated the ultimate late night sidebar with IFC Midnight to commemorate their 10-year anniversary. Reflecting their endlessly provocative slate, six free screenings, courtesy of IFC Midnight, will begin at the stroke of midnight: the brand-new restoration of Lars von Trier’s ANTICHRIST, THE BABADOOK, KILL LIST, MANIAC, THE AUTOPSY OF JANE DOE, and BERBERIAN SOUND STUDIO.

Another significant 20-year anniversary is that of the world’s leading genre website, BLOODY DISGUSTING, who have joined us to program a day dedicated to three of the most important films in their celebrated history hosted by Bloody Disgusting’s The Boo Crew Podcast. Opening the day is the battle between the king of the monsters, FREDDY VS. JASON with writers Damian Shannon and Mark Swift in-person, genre superheroes Adam Wingard and Simon Barrett will be on hand to discuss YOU’RE NEXT after a rare 35mm screening, and closing out the event will be Fede Álvarez with world’s first theatrical screening of his uncut EVIL DEAD in all its glory.

“As an institution that values and champions the communal theatrical experience above all, it’s a joy to bring Beyond Fest back to our theaters,” said American Cinematheque Creative Director, Grant Moninger. “With the Aero Theatre, the Los Feliz 3, and our partnership with the Hollywood Legion Theater, film lovers across LA can experience Beyond Fest‘s incredible immersion of cinema together and on the big screen.”

In the digital space, Beyond Fest is presenting with Amazon Studios and Blumhouse Television the virtual panel ‘Women In Horror: The Female Perspective.’ Featuring an all-female roster of filmmakers including Gigi Saul Guerrero (Writer/Director, BINGO HELL), Axelle Carolyn (Writer/Director, THE MANOR), Maritte Lee Go (Director, BLACK AS NIGHT), Marcella Ochoa (Writer, MADRES), and Lisa Bruce (Blumhouse Television), ‘Women In Horror’ delves deep into the process, challenges, and cause for celebration experienced by female genre filmmakers. The panel will be available to watch for free online from 1st October on beyondfest.com and americancinematheque.com

Beyond Fest will continue to support the filmmaking community with the help of Final Draft who will be presenting three dedicated short blocks and supplying the selected films with a copy of Final Draft 12 as well as giving free entry for each of the selected budding screenwriters into Final Draft’s Big Break Screenwriting Contest.

Attendees will need to present both proof of vaccination and a valid ID at the theatre to be admitted into the event. (Last vaccination must be recorded as 2 weeks prior to the event). Reasonable accommodations will be provided to those needing it for religious or medical reasons with proof of a negative COVID-19 PCR test, taken within 72 hours of the screening. For more information regarding requirements, visit americancinematheque.com.

Tickets will be on sale via americancinematheque.com on September 17th at 10AM PST. Visit beyondfest.com and the American Cinematheque for details. 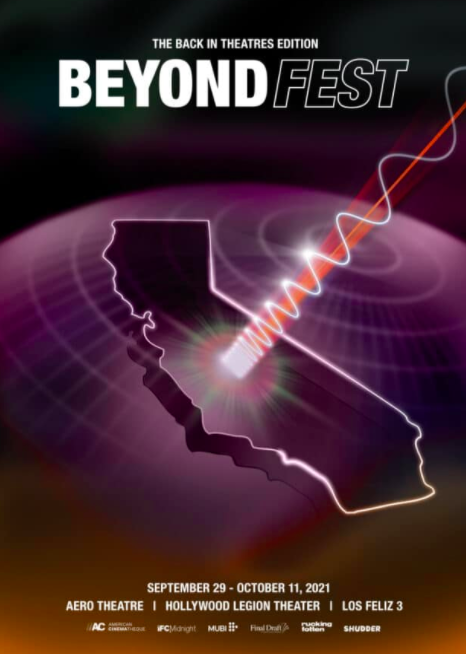