Blu-ray Review: “Man of A Thousand Faces” From Arrow Academy

Lon Chaney once said, “Between pictures, Lon Chaney doesn’t exist.”As if to add weight to this credo, his final resting place in Forest Lawn Memorial Park’s Great Mausoleum in Glendale, California is unmarked. Clearly, the exceedingly private silent film star wanted to be remembered more for his work than whoever he may have been in his closely-guarded private life, making 1957’s biopic, MAN OF A THOUSAND FACES something akin to the unmasking of Gaston Leroux’s Phantom at the eager hands of Mary Philbin. Luckily for Lon, this James Cagney comeback vehicle seems to have been largely forgotten, and even those with an interest in Arrow Academy’s newly restored version of the film are unlikely to gain a new understanding of who the man beneath the makeup truly was.

MAN OF A THOUSAND FACES is a snapshot of Hollywood at a time of identity crisis: more about how the dream machine viewed itself than the man whose life it celebrates. As the pre-title card proudly announces, the film was a special release from Universal-International for Hollywood’s Golden Jubilee, commemorating fifty years of Tinseltown film production. This time of self-congratulatory ballyhoo also happened to be taking place in the shadow of the federally-mandated shakeup which spelled the end of the studio system. A shrewd move from the small (at the time) Universal-International, MAN OF A THOUSAND FACES was designed to make the studio a major player in the newly blasted open movie market through the old-school appeal of silent cinema.

You see, the film was made at a time just prior to movies being picked over and re-examined as valid pieces of art (the auteur theory had just barely reached public consciousness) but the generation who had come of age in the silent era was the first to look back on the medium with a nostalgic remove. As Kim Newman explains on the disc’s special features, the coming of sound was a cataclysmic rift in the development of cinema, and many silent stars remain “sealed off in time,” conferring them the status of legend. Biopics had been around since the medium began, but they largely concerned historical figures. MAN OF A THOUSAND FACES is fascinating because it’s an early example of Hollywood telling a story about one of its most famous and mysterious children, examining the legacy he left behind.

Whether it’s any good is another matter. Despite it being a nostalgia piece, MAN OF A THOUSAND FACES is brazenly 1950s, styled to fit the then current era’s popular melodramatic/women’s picture mold. As Vic Pratt points out in his essay on the film, Douglas Sirk was employed by Universal-International at the time, and some of his collaborators worked on it, including cameraman Russell Metty and composer Frank Skinner. MAN OF A THOUSAND FACES was released between WRITTEN ON THE WIND (1956) and IMITATION OF LIFE (1959), and it certainly looks and sounds like those Sirkian masterpieces, even if it doesn’t feature the director’s sense of bitter irony. Instead, the film is an overly deferential, frequently histrionic affair that feels more dated than Chaney’s silent features.

This is especially apparent in the appearance of Dorothy Malone (who nabbed an Oscar for her exquisite turn in WRITTEN ON THE WIND a couple of years earlier) playing Chaney’s notoriously troubled first wife, Cleva. She’s a pain in the neck—and her ugly reaction to her husband’s deaf parents is all-but unforgivable— but for the contemporary viewer, it’s hard not to sympathize with her desire for both career and motherhood, even if everyone else in the film acts like she’s totally crackers. Cagney has an uphill struggle playing Chaney. As one of the most recognizable screen stars of his time, there was little chance he could disappear into the role, a task made even more impossible due to the fact that Chaney had no public persona whatsoever and a single talkie (THE UNHOLY THREE) to his name. You’d be forgiven forgetting that this is, indeed, a showbiz movie, since Chaney doesn’t arrive in Hollywood until halfway through the film’s two-hour running time, and it’s about eighty minutes until it really gets into the thick of his film career.

This is where the magic happens, as we’re treated to a few fairly convincing recreations of some of Chaney’s most famous scenes, including the flogging of Quasimodo in THE HUNCHBACK OF NOTRE DAME (1923), and the aforementioned unmasking in PHANTOM OF THE OPERA (1925). These are highlights, but again, they betray the memory of the film’s subject with rubber masks replicating the mindblowing facial appliances Chaney famously crafted. The rest of the actor’s filmography is glossed over with montages of character mock-ups. This is deeply unsatisfying, especially considering the fact that the film makes so very much of “the actor” as “a very special human being” who possesses the “extraordinary ability to make us feel.” For a film dedicated to one of the most subtle and emotionally evocative silent screen artists, MAN OF A THOUSAND FACES is conspicuously overstated, stiff, and unmoving.

Arrow Films has done their usual bang-up job on this addition to their Arrow Academy sublabel. The film has been exclusively restored by Arrow and is presented in its original aspect ratio of 2.35:1 with mono audio. Minus some clear damage to the source print (most notable are vertical scratches at the right edge of the image) MAN OF A THOUSAND FACES is the type of quality, HD Blu-ray presentation you can always count on Arrow Films to deliver. Contrast is excellent, with deep black levels and a well-modulated gray scale. Detail is so sharp, during a trick shadow number you can see the performer behind a scrim mirroring Cagney’s movements.

Special features are light but illuminating, including a new audio commentary by film scholar Tim Lucas, a newly filmed look at Lon Chaney and his legacy by the critic Kim Newman, an image gallery, and original trailer. The disc comes with reversible sleeve featuring original and newly commissioned artwork by Graham Humphreys, and a fully Illustrated booklet with a newly commissioned essay by Vic Pratt of the BFI in the first pressing.

The final moment of MAN OF A THOUSAND FACES sees the camera panning through a gallery of drawings representing Lon Chaney’s greatest roles, seeming to echo the actor’s own sentiment that it’s best to remember him by his work. A hoary melodrama gussied up like a showbiz yarn, MAN OF A THOUSAND FACES features a solid enough turn by James Cagney, lush orchestrations and the grandiose visual stylings of the era’s most stirring blockbusters, but those with a deeper interest in the film’s subject will come away wanting. Luckily, Arrow Films helps put this somewhat forgotten early biopic in its proper context, making it more than a curio, but less than essential.

MAN OF A THOUSAND FACES is a must-buy for Chaney obsessives and Hollywood History buffs, but for everyone else who wants to understand the soul of the titular many-faced man, better just to watch his movies. He obviously would have preferred it that way.

MAN OF A THOUSAND FACES is available now from Arrow Films 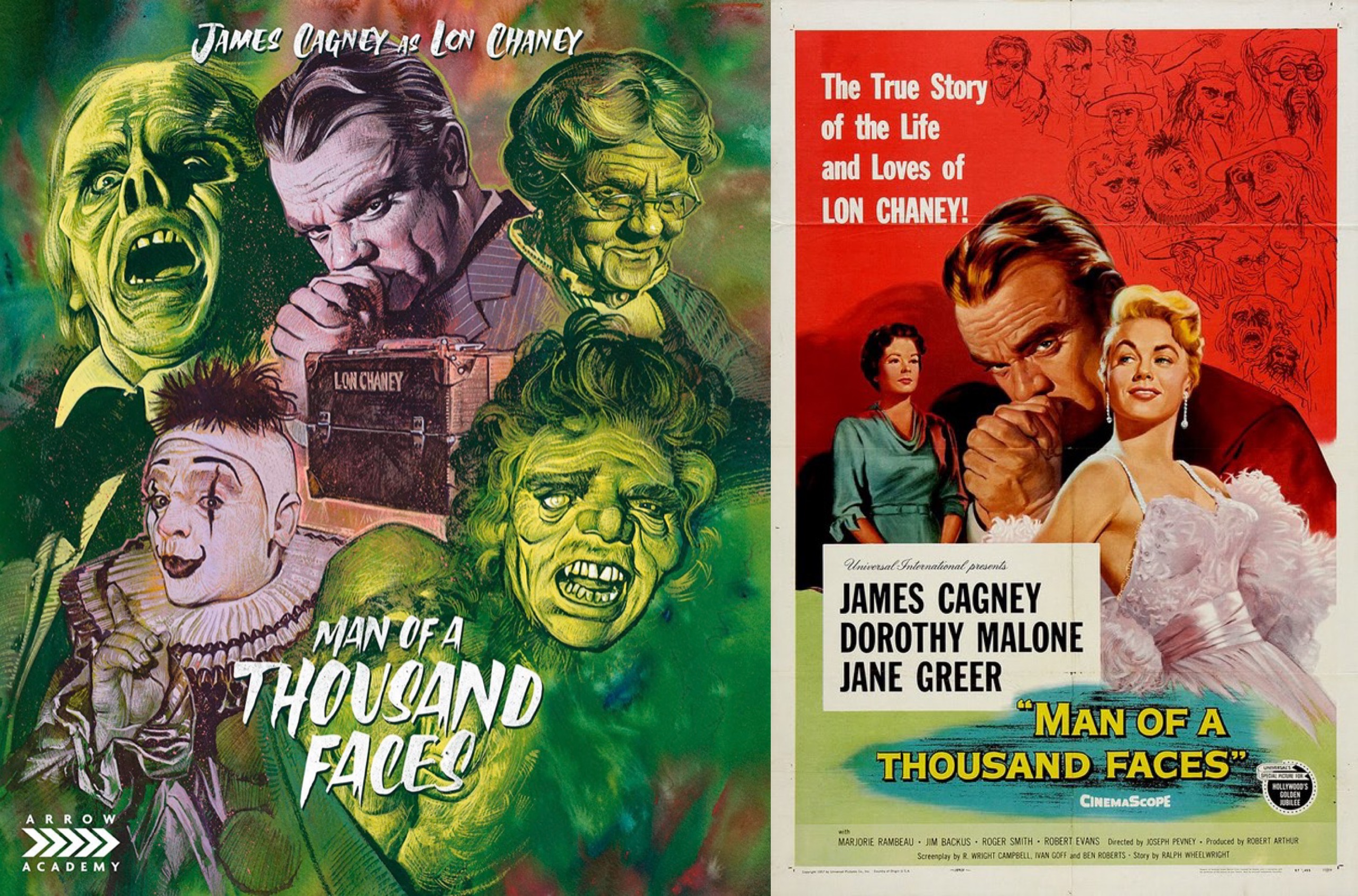