One of the few notable horror films hailing from Belgium, director Jean Brismée’s THE DEVIL’S NIGHTMARE (1971) is treasured by European cult cinema fans not just for its rarity as a curio, but also for bodacious Italian actress Erika Blanc’s signature turn as a crimson-haired succubus in a peekaboo jumpsuit. Her appearance made an indelible impact on the countless young men (and likely, quite a few women) who were exposed to the television and VHS cuts of the film that floated around throughout the decades, and it’s these very fans that have kept Brismée’s sole feature alive. Somewhat eclipsed by Belgium’s most famous horror flick (Harry Kümel’s sapphic vampire classic, DAUGHTERS OF DARKNESS) THE DEVIL’S NIGHTMARE is the lesser work, but offers a mesmeric atmosphere all its own worth luxuriating in.

The film begins with a load of WWII stock footage and the none-too-convincing stabbing of a newborn by Baron von Rhoneberg (Jean Servais), who we meet again in the present day inhabiting an imposing castle while performing alchemical experiments. After an encounter with the Devil (Daniel Emilfork) by the roadside, a busload of tourists heed his advice and hole up in the Baron’s home for the evening. The group includes a voracious driver (Christian Maillet), a shrewish wife (Colette Emmanuelle), her philandering husband (Lorenzo Terzon), a grumpy old fuddy-duddy (Lucien Raimbourg), two hot-pants-wearing lesbians (Shirley Corrigan, Ivana Novak), and a young seminarian so handsome you could set your watch by his eventual sexual undoing. 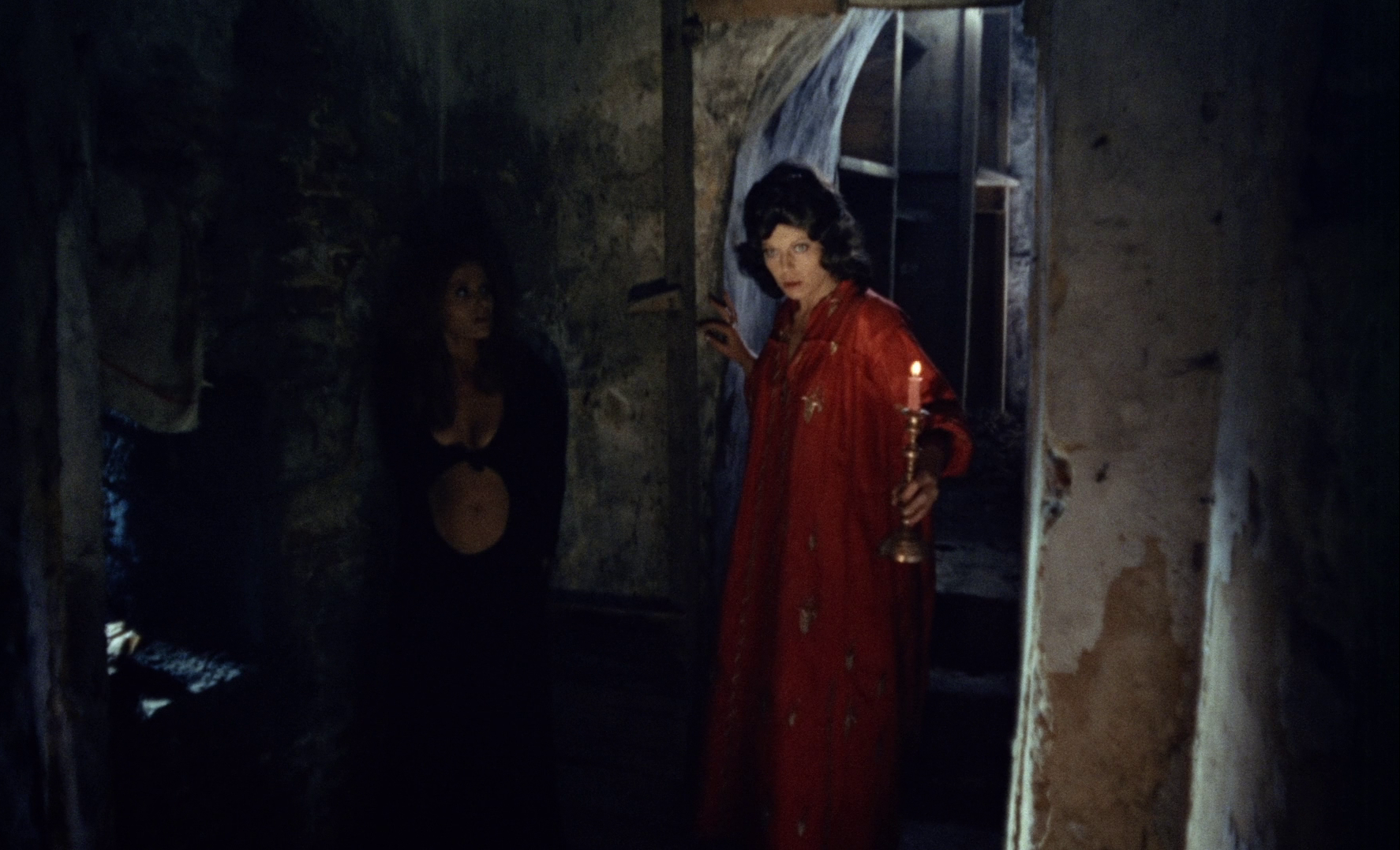 As the travelers are shown their rooms, they get a crash course in the building’s bloody history, and soon learn from the Baron that his family is plagued by a curse that marks the eldest daughter of each generation as a succubus in service of Satan. As if on cue, the mysterious Lisa Müller (Blanc) comes a-knocking, proceeding to seduce and murder each of the guests in increasingly bizarre ways.

The trappings of Gothic Horror are all present and accounted for–bats, candlesticks, multi-colored beakers, and the like–but if THE DEVIL’S NIGHTMARE feels a bit like a Hammer film, its a Hammer film on Klonopin. Brismée is in no rush for the violence to begin, and his characters move about the castle corridors as if in a semi-trance. This unhurried pace gives us ample time to drink in the dolorous atmosphere, enjoy some soft focus girl-on-girl action, and get to know the thinly drawn characters. Each is representative of one of the seven deadly sins (Gluttony, Greed, Envy, Lust, Wrath, Sloth, and Pride) and meets their doom by designated fatal flaw, courtesy of Blanc, who owns the film from the moment she first appears onscreen in extreme close-up.

Known for her roles in KILL, BABY, KILL (1966) and THE NIGHT EVELYN CAME OUT OF THE GRAVE (1970), Blanc’s threatening sensuality was never better harnessed than by Brismée. A lush redhead with cheekbones so sharp they could kill and a tooth gap to make Madonna jealous, everything about Blanc’s incandescent screen presence feels so erotically perverse, that when she asks one of her victims, “Do you find me lascivious?” the absurdity of the question almost verges on spoofery. Best of all, with the application of ashen facepaint and a smear of black lipstick, Blanc’s striking features turn hideously alien as she goes from temptress to ghoul in the blink of an eye. Her charismatic performance, girded by charmingly creaky in-camera effects, a seductive score by Alessandro Alessandroni, and a darkly mephistophelian conclusion, makes THE DEVIL’S NIGHTMARE an essential diversion for fans of European horror cinema and worthy discovery for the uninitiated. 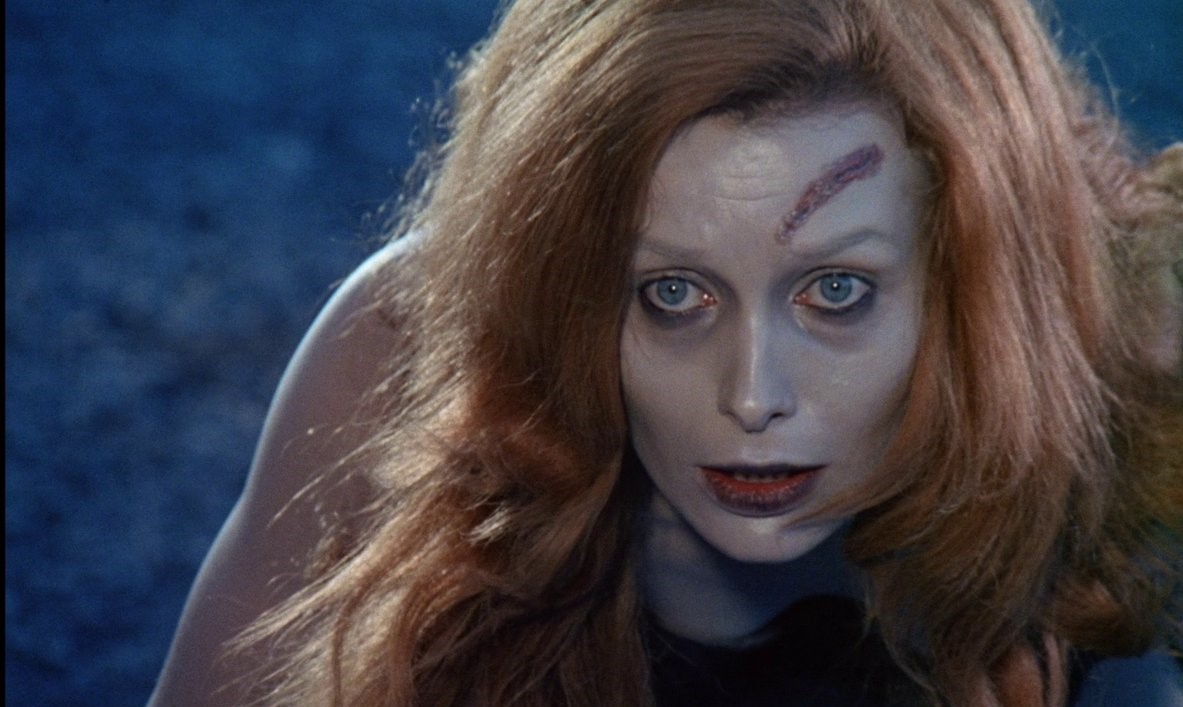 Cult film label Mondo Macabro’s new region-free disc showcases THE DEVIL’S NIGHTMARE uncut in a 1080p presentation taken from a 2K scan of the original camera negative with both French and English versions. An onscreen disclaimer notes that the source materials were in a compromised state and that the restorers did the best with what they had to offer the finest transfer possible. Mondo Macabro’s has done a bang-up job with inferior materials, and though debris and light discoloration do crop up from time to time, this facelifted THE DEVIL’S NIGHTMARE will be clean enough to those for whom visible grit and damage are part of the aesthetic appeal of this era/style of filmmaking.

The always-welcome author Troy Howarth turns in another of his witty, informative, must-listen commentaries, and the disc includes interviews with Jean Brismée, assistant director Robert Lombaerts, and filmmaker Roland Lethem. The interviewees each share their roles in working on the film, as well as give fascinating information on the Belgian movie industry and the country’s INSAS film school, which Brismée co-founded in 1962. Beyond the insight one gleans about THE DEVIL’S NIGHTMARE, it’s commendable that Mondo Macabro allowed the filmmakers to shed some light on one of Europe’s least celebrated film communities. The Special Features are rounded out with Trailers, TV Spots, and previews for other features from the label.

THE DEVIL’S NIGHTMARE is available at mondomacabro.com 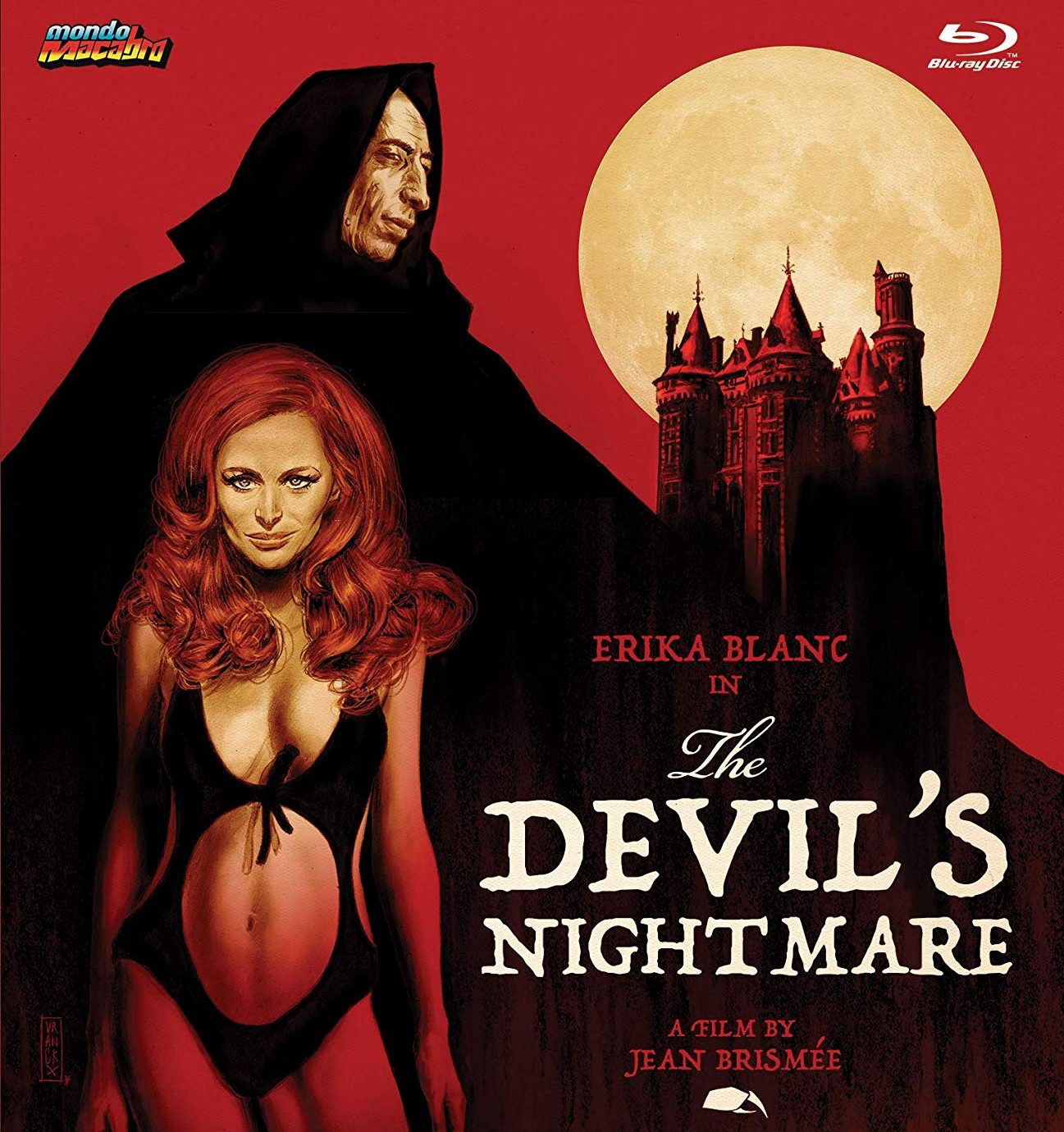