Blu-ray Review: The method behind the “MAYHEM”

The sort of film that truly benefits from being seen with a large and enthusiastic audience, Joe Lynch’s MAYHEM was sadly unable to secure the big-screen release that the similarly themed THE BELKO EXPERIMENT achieved. That’s a shame, but now it can be enjoyed at home via RLJE’s disc editions—most cathartically after a hard day at work.

Available on DVD, Blu-ray and a 4K Ultra HD/standard Blu-ray combo pack, MAYHEM is a savagely entertaining satirical bloodbath that finds the ultimate violent metaphor for corporate climbing. All Derek Cho (Steven Yeun), who’s just been fired from Towers & Smythe Consulting after being set up by a rapacious superior, wants is an audience with his boss (Steven Brand) to plead his case and attempt to get his job back. It happens that he sets about pursuing this goal just as the “ID7 virus” gets loose in the T&S building, causing everyone to lose their inhibitions, give in to their most extreme impulses and indulge in wanton sex and violence. Both Derek and Melanie (Samara Weaving), a wronged client, catch the bug themselves, which fuels their vengeful battle through T&S’s offices. 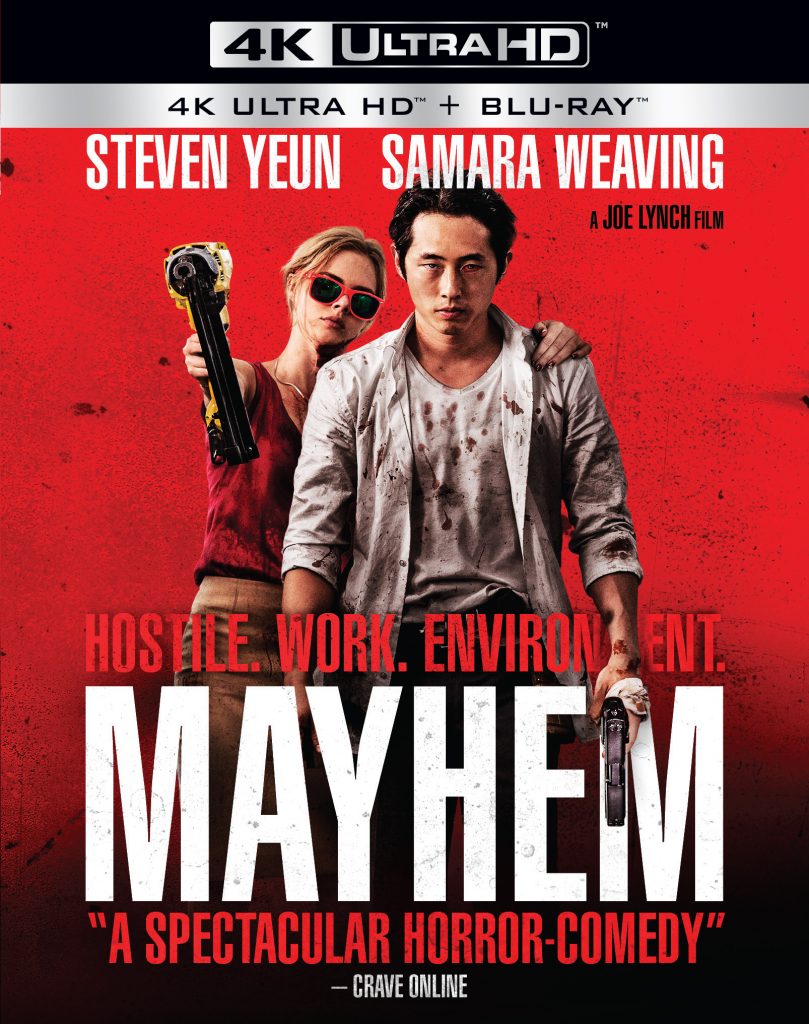 Amidst the brutally well-staged dustups and verbally scathing confrontations in Matias Caruso’s taut, gleefully anarchic script, the two leads fully engage our sympathies. Yeun fulfills Lynch’s ambition to present an Everyman with an edge, while Weaving attacks her role with feisty charisma (and has the bluest eyes in the history of blue eyes). They’re a couple of heroes worth cheering for, and you might well find yourself doing just that even if you’re following their aggressive adventures while sitting at home rather than in a theater.

As seen on the Blu-ray—I wasn’t able to judge the 4K version—MAYHEM has an appropriately harsh, contrasty and always sharp and well-defined look in the 2.35:1 transfer (the case erroneously lists it as 1.85:1), backed by energetic DTS-HD 5.1 Master Audio. The package also indicates that a making-of featurette is the only special feature, when in fact there are a few, most significantly a great “technical commentary” by Lynch, cinematographer Steve Gainer and editor Josh Ethier. Despite that description, the trio do address character and theme as the film proceeds, while also offering plenty of nuts-and-bolts details. All possible elements of the film’s creation are discussed here, including any number of fun factoids: a few surprising digital alterations, familiar genre faces in one-shot cameos, the circumstances behind a potential “MAYHEM baby,” occasional mistakes and regrets and even stuff that didn’t make it in. Lynch’s regular composer Bear McCreary was originally supposed to do the score (with Steve Moore doing a fine synthy job in his stead), and we learn a bit about a different, originally intended ending. From the trio’s fully engaged and engaging conversation, you get the sense this was a true collaborative effort, and that despite the restrictions of time and budget, everyone had a great time making the film—a feeling also borne out by MAYHEM itself.

The aforementioned featurette, “Creating MAYHEM: The Making of the Film,” is a 12-minute EPK-style segment that doesn’t add much to the commentary, other then offering Yeun and Weaving a bit of talking-head time and brief on-set video, revealing Lynch wearing a samurai headband for part of the shoot. Also included is “The Collected Works of Derek Cho,” offering closer looks at the oil paintings our hero creates of his co-workers—perhaps a much less violent form of therapy than the sort he spends most of the movie indulging in.