To paraphrase Martin Scorsese, the camera is a tool to make an audience see the world as the filmmaker does. If this is the case, the films of Barry J. Gillis should be enough to get him committed, or at least uninvited from family gatherings and workplace events in perpetuity. A grim, anarchic, trash odyssey from the Great White North, one could describe Gillis’ WICKED WORLD as the unwanted offspring of Andy Warhol and John Waters raised by Andy Milligan and still not even come within spitting distance of an accurate classification. It’s not hyperbole to say that WICKED WORLD is unlike anything you’ve ever seen or are likely to see again, and thanks to the good folks at American Genre Film Archive/Bleeding Skull, you can experience Gillis’ 16mm schizoid death dream for yourself on glorious Blu-ray disc.

The plot—such as it is—concerns a cop named Grant Ekland (Gillis) who’s haunted by the murder of his girlfriend at the hands of a psychopath named Harold (Eddie Platt) who has been recently released from a mental institution. Ekland seeks revenge against the now-vegetative Harold, who ruminates on death and destruction as he’s wheeled about by his incompetent nurse. 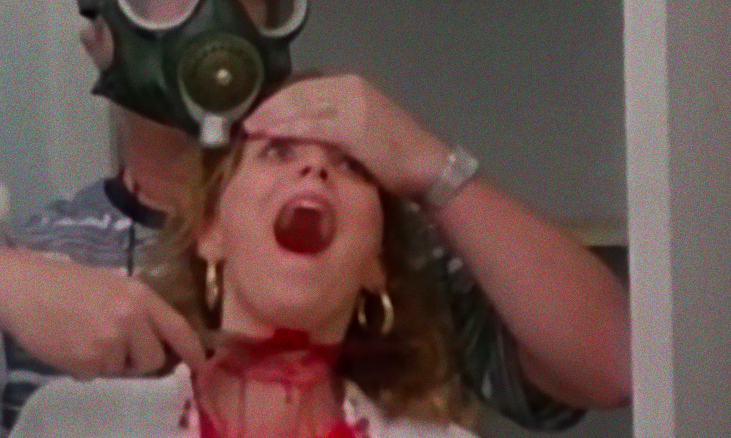 A slurry of violent non-sequiturs, metal music, experimental effects, droning synth, and soft-headed philosophizing, WICKED WORLD is incoherent but never less than captivating. The editing is of the breakneck variety with smash cuts and speed ramps out the wazoo, and cheapo digital effects like whirling severed limbs and splashes of blood. The truly bizarre ADR makes everything feel especially alien. Not only does it sound like the dialogue is being piped in from Mars, but the actors often deliver their lines in an unenthusiastic burble as hypnotic as it is laughable. Add in repetitive dialogue (some of it looped) and you’ve got a nightmarish and disconnected aura that would furrow David Lynch’s brow.

Harold is the audience’s guide: providing NPR-smooth narration about the miserable state of modern man to give the gruesome acts some sort of ideological context. “I hate life” is his constant refrain as he fantasizes (reminisces?) about slashing and strangling scads of bland young Torontonians for some sort of book he claims to be writing. Add in a vile comic sequence of police brutality, a whole lot of bitching and moaning about political correctness and violence in movies, plus a baffling post-film title card about government experiments to implant microchips into the human brain, and it all starts to feel like the manic paranoid reveries of an incurable lunatic vomited directly onto celluloid.

AGFA’s transfer of this virtually unseen trash-horror provocation is taken from the film’s original ¾” master tapes. Shot on 16mm and edited on tape, WICKED WORLD doesn’t deserve to look as good as it does here, but bless AGFA for going the extra mile. Included are the original version and the unseen 2019 director’s cut, the differences being some obtuse pre-title quotes and added effects. Also included are an hour of behind-the-scenes footage, a five-film update with Gillis, a tribute to the late Eddie Platt by his son, and a music video from Marshall Law—the band prominently featured in the film. 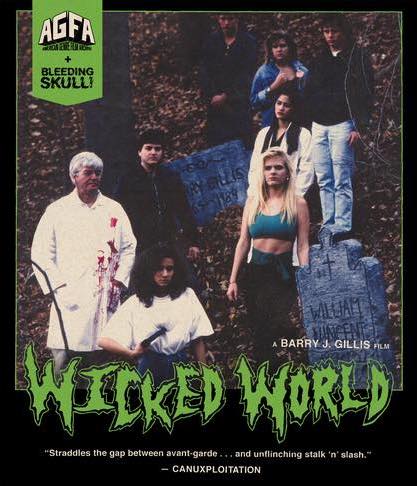 Returning to the earlier Scorsese reference, Barry J. Gillis’ WICKED WORLD is something of a braindead TAXI DRIVER: misanthropic, mean-spirited, and formally unhinged. This disordered gutter opus will be unwatchable garbage to some, an engrossing treasure to others, and totally unforgettable to absolutely anyone crazy enough to let it assault your grey matter. AGFA and Bleeding Skull present two cuts of the film in a great package, marking WICKED WORLD as a signature release from these keepers of the DIY, trash cinema flame.