Director Richard Bates Jr. has got to have a dark sense of humor. Both 2014’s SUBURBAN GOTHIC and 2016’s TRASH FIRE are very different films, but both have a vein of humor that is blacker than the depths of Paris’s catacombs. Laughing our way through the pain of life can help us cope with the darkness all around us. In TONE-DEAF there are as many laughs as there are reasons to cry in frustration and scream in fright.

The film begins with Olive (Amanda Crew) breaking up with her boyfriend. Though we barely get to know the guy (Nelson Franklin), he does not seem terrible but they seem like a terrible mismatch. Soon after that incident, Olive is fired from her job. And her friends (AnnaLynne McCord and Hayley Marie Norman) are terrible. Olive can’t seem to catch a break. At the suggestion of her friends and mother (Kim Delaney) she begrudgingly decides to get out of Los Angeles for the weekend to clear her head. While she seems bored out of her skull away from the insta-worthy world of the city, Olive does not realize that this numbing lack of stimulation is nowhere near as bad as what awaits her from her host.

Harvey (Robert Patrick) owns the house that Olive rents. He is throwing red flags left and right (mostly right), but Olive seems more annoyed than concerned. Her trust in strangers turns out to be an unfortunately repeating pattern as the film progresses, but so does her dumb luck. But Harvey’s creepiness has deep roots in his conservative political beliefs and his hatred for everything these liberal youngsters stand for. 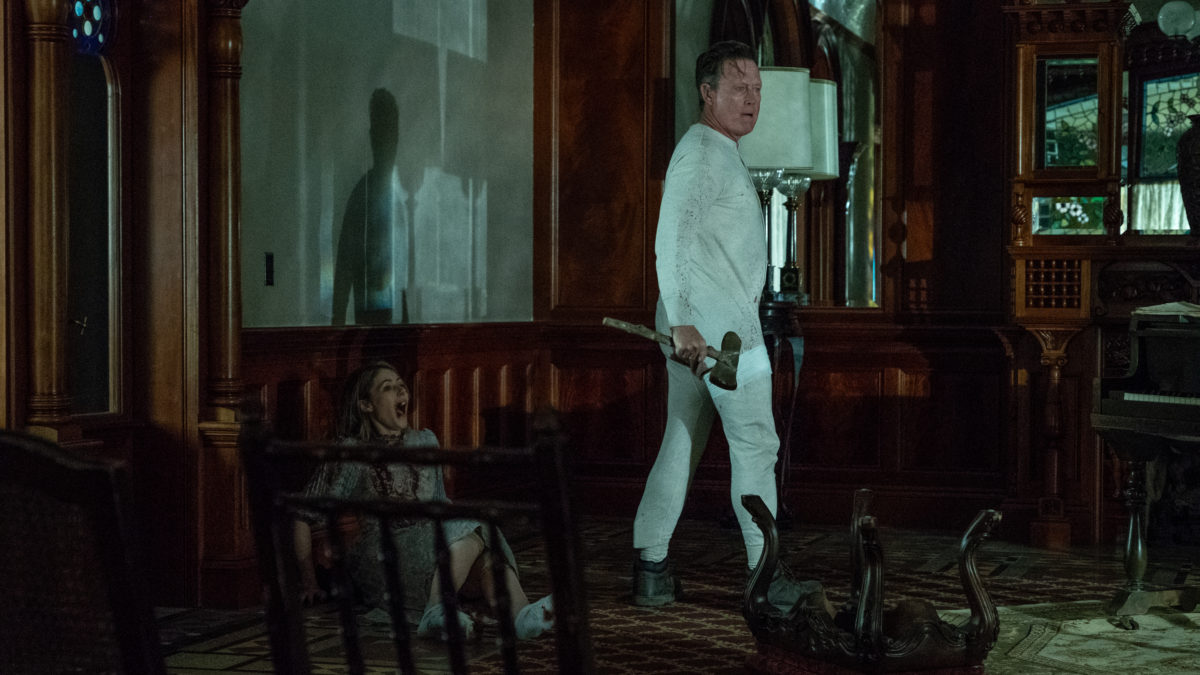 Much of the humor in TONE-DEAF—and there is a lot of it—comes from these contrasts that arise. Young versus old. Conservative versus liberal. Country versus city. Though the fish-out-of-water story of Olive in the country is not anything we haven’t seen before, Crew and Patrick’s performances really sell these satirized characters and prepare us for the incoming horrors. Neither character is someone you would want to meet at a bar, but that does not mean that either of them deserve such terrible fates.

Unlike Bates’s previous horror shockers TRASH FIRE and EXCISION, TONE-DEAF does not play coy with the inevitable terror that emerges from the clash of the personalities and fragile mentals states of the characters involved. He has proven himself to be a director who can build a tense atmosphere throughout a film without telling us precisely why, and here he shows that he is equally capable of maintaining that tension when we are all fully aware of what is at stake. As Harvey unravels we know that it will all come crashing down, because we have already seen that he is capable of more mayhem than we give him credit for.

Though there are a few superfluous characters and a small sprinkling unnecessary distractions in the plot, overall TONE-DEAF is a tight little horror film about the current culture wars being waged between the red and blue ends of the political spectrum. While this fissure can sometimes create real world terror, that rift in TONE-DEAF has both hilarious and bloody consequences.