Darcy the Mail Girl On Cosplay, Feminism, and “The Last Drive-In”

As right-hand woman to the recently resurrected Joe Bob Briggs, Darcy the Mail Girl (AKA Adult Film Star/Princess of Dorkness/Cosplay Queen, Diana Prince) wears many hats. An integral player in motivating the former MONSTERVISION host to return to Shudder for the internet-breaking THE LAST DRIVE-IN, Prince has also stolen the hearts of fans old and new for her playful onscreen sparring with Joe Bob, her clever cosplay, and her overwhelming affection for all things creepy and weird. Below, we chat with Diana about her dedication to the horror genre, what it’s like being besties and co-workers with her childhood hero, and how she’s a Mail Girl for a new era.

Where did your love of horror love come from?

Well, my dad definitely started it really young. He had Stephen King stuff everywhere, and he hid it all from me like it was this big secret. He’d be watching scary movies and say, “You have to stay out of the room.” I’d try to sneak a peek and get so scared that I’d cry all night, and he’d say “See? This is why.” [Laughs]

The first horror movie I ever actually sat through without being a chicken was FRIDAY THE 13TH: THE FINAL CHAPTER, and I just thought it was amazing and said, “What have I been doing not watching these? Give me more!” I guess Jason started it all!

You have a love for cosplay as well. How’d you get started in that?

My grandma, I guess. I always went around pretending to be things (like Sleeping Beauty) and she sewed, so she always hooked me up with costumes! From a young age, it just seemed natural. Why would I wear normal clothes? That doesn’t make any sense. [Laughs] I know, it seems weird. It’s just much more fun! If everyone wore costumes instead of, like, fancy dresses to events, things would be more relaxed.

It’s fitting that it became a big element of THE LAST DRIVE-IN.

I was really happy when Joe Bob agreed to it, although he agreed to it really last minute. Two days before the initial 24-hour marathon he said, “Okay, can you get all thirteen movies done?” I was just, like, “Shit. Okay, I’ll try!” 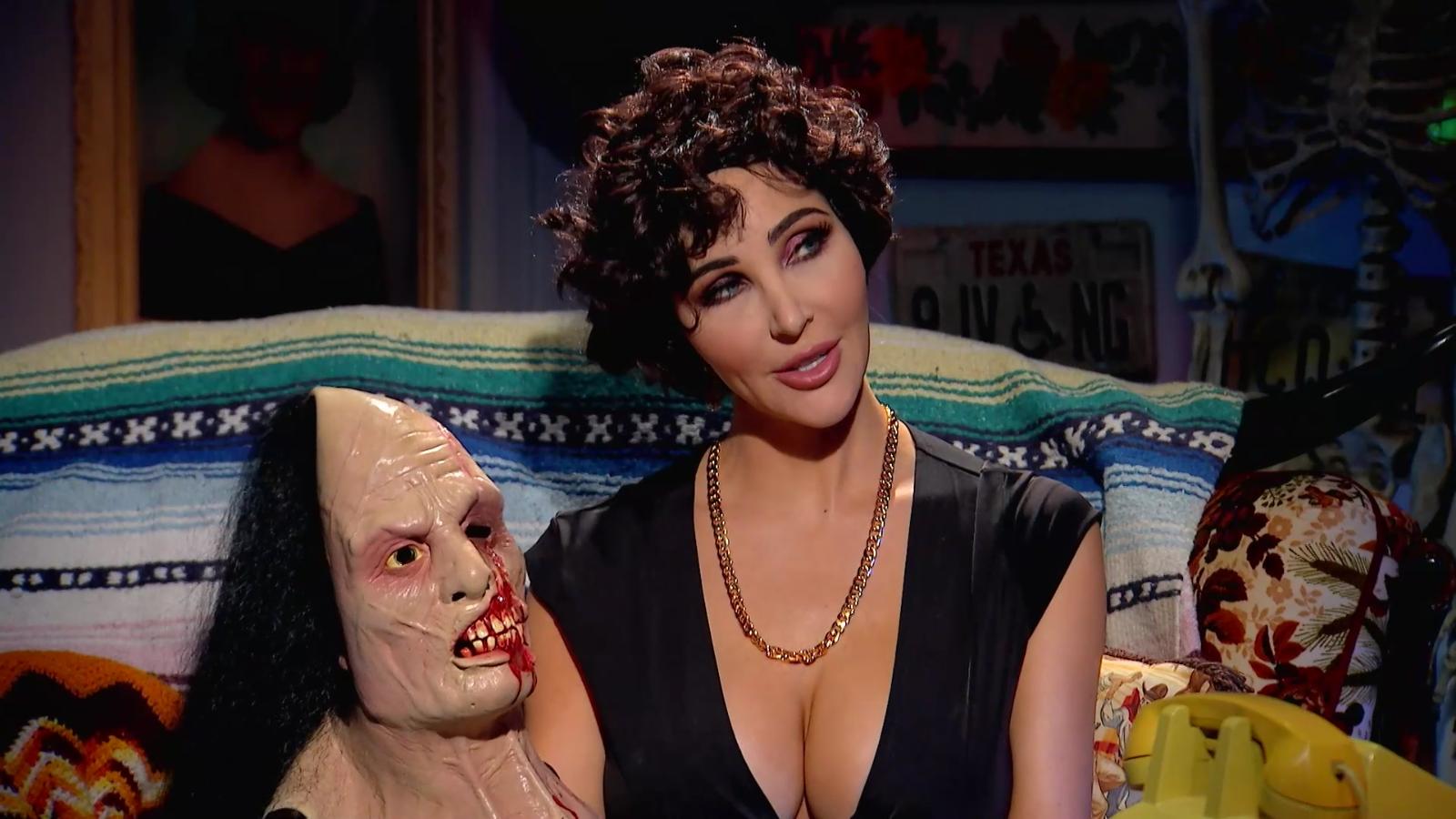 You were an integral part of bringing Joe Bob back to horror fans. Can you tell us a bit about that?

I went to a book signing when he was in his “John Bloom” phase, and I was actually dressed up as a Mail Girl (because obviously, I cosplay wherever I go) and I was talking to him, and I was like, “Who are you? Where is Joe Bob? Why are you doing this?” [Laughs] I walked into a room of scientists ready to buy his smart “John Bloom” book. I felt really odd, and I kind of apologized, and he’s like, “No, don’t apologize. It’s cool.”

We became friends, and I was like, “We need you. You have no idea.” I started showing him online how people still talked about him and I wasn’t the only crazy person out there missing him. I just told him, “You need to come back,” and here we are!

Did you always have your sights set on the Mail Girl role?

No, not at all. He just said, “Hey, I need some help. Can you do it?” And I agreed. It was literally that simple. It was daunting, though. I tried to back out a couple times, and kept saying, “Are you sure?” He was like, “Seriously. Who else is going to work for no pay?” [Laughs] I finally just said, “Okay, I’m your girl.”

What was the filming process like for the first marathon?

The first one was chaotic. We had hoped to shoot in Texas, and that all fell through at the last minute. So, it kind of got crammed into some reality show’s place, and there was one dressing room with no mirror. It was chaos, but it was amazing chaos!

You got some flak early on for your performance, was that difficult for you?

Honestly, I was always terrified about being compared to the other Mail Girls. I was so nervous to do it, and I think people picked up on that.  “She’s not like the other girl” and “We hate her.” They were writing so many mean things, but Joe Bob kept saying, “I see it in you. You need to stick this through and keep going.” I don’t want to go into the negative stuff, but I was really sad for a while. I was crying on set when we were filming the first one. I kept saying, “I’m terrible at this. I’m scared of you. I’m scared to talk on camera. This is just a mess, and I’m so sorry because if there’s anything to hate about the show, it’s going to be me.” But he was just like, “Shut up. You’re doing fine. Get your ass out there.” 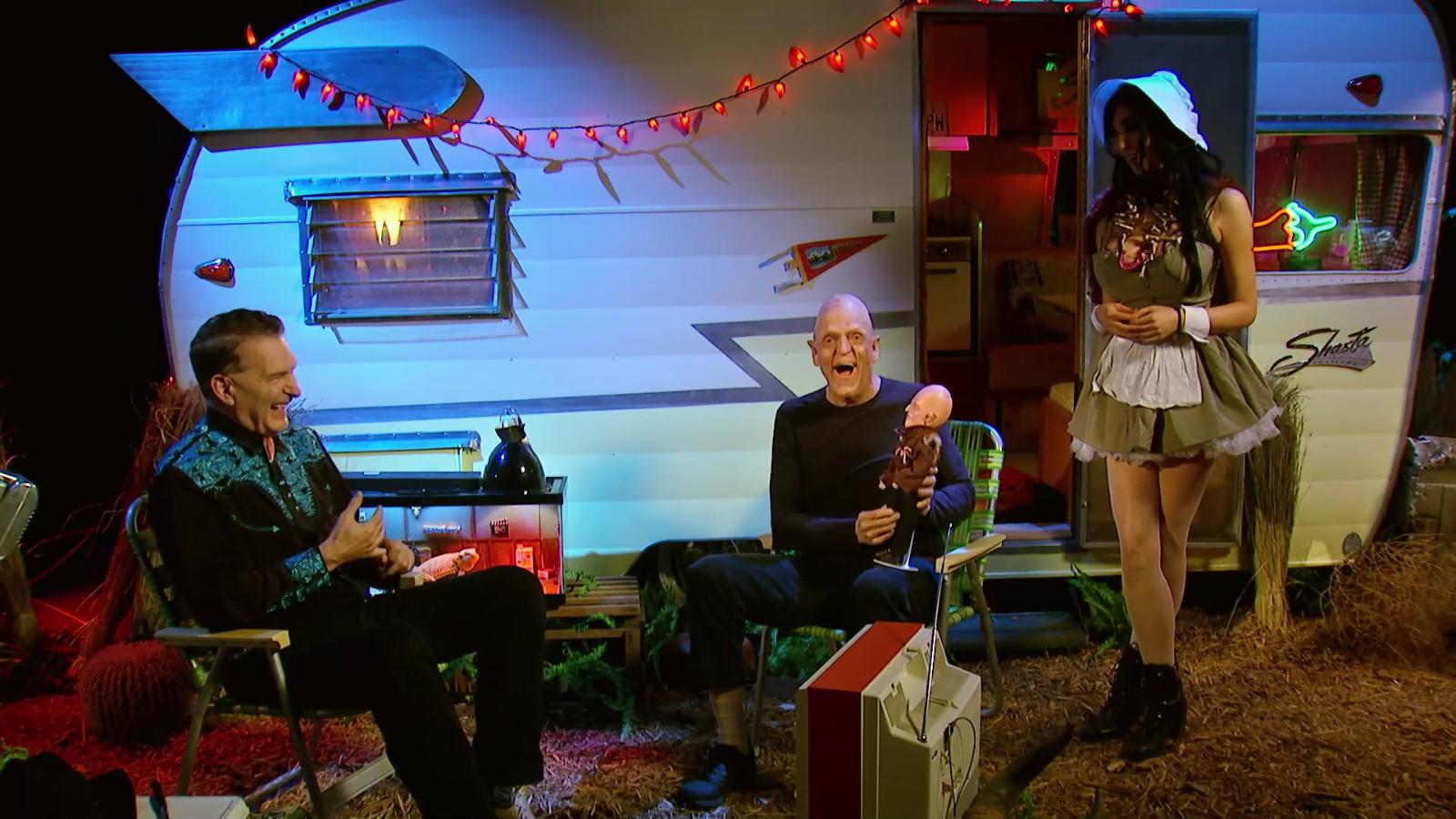 What was it like having to relive the whole thing during the recent one year anniversary? You were asked to live-tweet it.

It wasn’t as traumatic as I expected it to be. I had never actually watched any of it. I just knew how I felt during it, which was not good. I realized that I wasn’t that terrible. All the stuff that was so mean, that I just took to heart as gospel, it’s like…I was just a girl finding her way! I don’t know. It was nice to be able to just move past that. I even have to think I would be the same way if I was one of the viewers watching that first marathon. You expect somebody a bit more polished, maybe. But, I feel, personally, like I found a groove, and  I appreciate everyone that stuck with me through it—Joe Bob and the gang.

And people seem as excited to meet you as they are to meet him these days, so that really says something!

Aww. I don’t think that’s quite true, but thank you. It’s so fun going around and meeting people.

Since things have gotten a little more pleasant on the show for you, what’s your favorite part of filming?

Just seeing Joe Bob work, man. His brain is insane. I’ve never met anybody as disciplined and intelligent as him. To get to be part of that creative process is just fricking mind-blowing.

Have you had any favorite moments from the show?

Well, come on, the HELLO MARY LOU: PROM NIGHT II episode! I just love that movie so much and have been preaching it forever. That I finally got to kind of present it and let people know how amazing it is in the most spectacular way possible, that was pretty awesome. 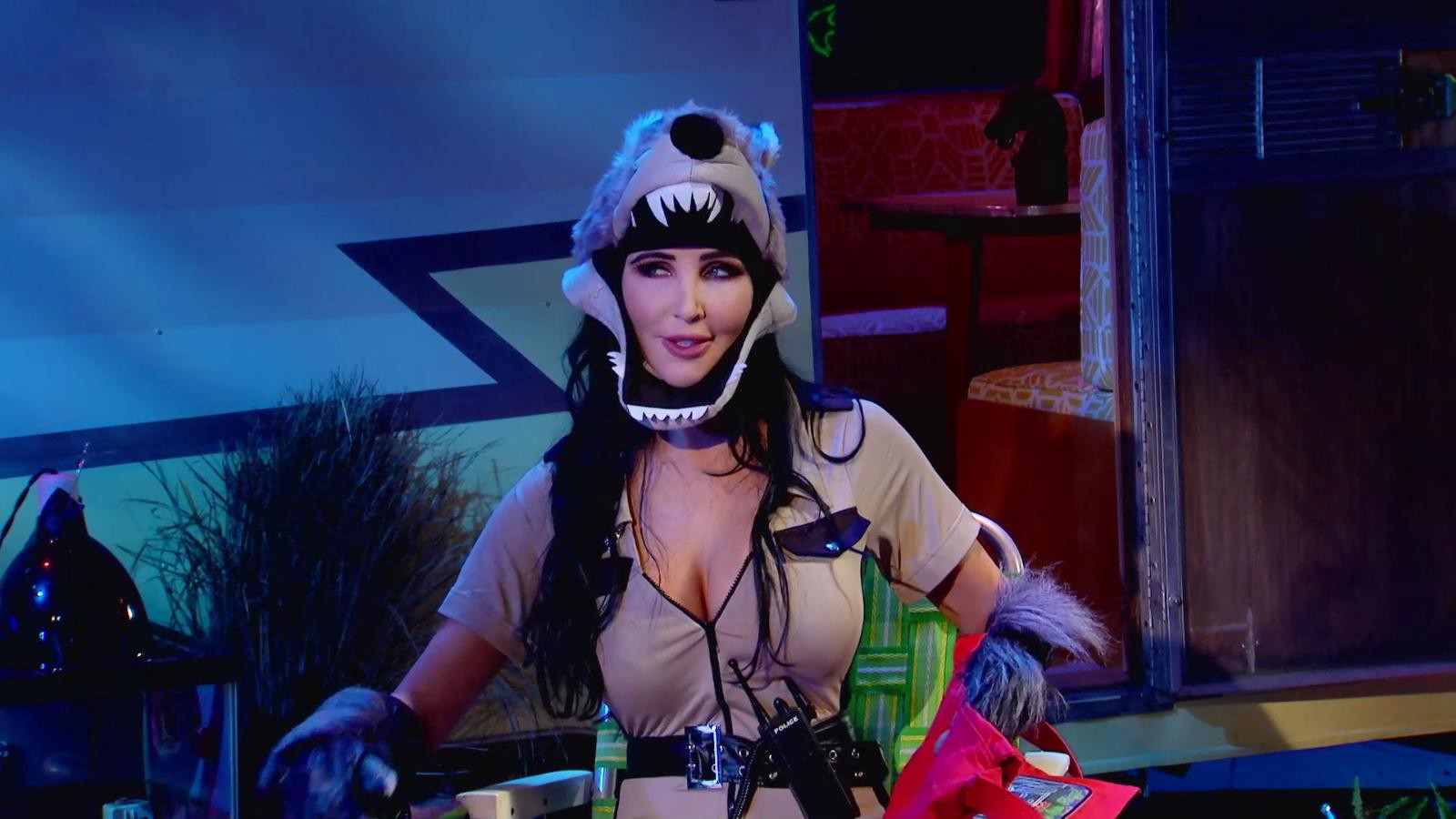 How has it been traveling around with Joe Bob?

[Laughs] Quite interesting. Everywhere is different. It’s kind of forced me to come out of my shell, because he doesn’t take “I’m having social anxiety issues right now” or whatever else is going on as an excuse. He’s like, “Nonsense. You’re doing your work.” Then you get out there, and you’re reminded that everyone’s just nice and happy and loves horror and loves Joe Bob. It’s a great atmosphere to be in.

Have you met any of your personal horror heroes at conventions?

Oh, gosh, plenty. Creature Feature Weekend was one that blew my mind because Frank Henenlotter was our next-door neighbor and I had no idea! He was just opening his door, and Joe Bob’s like, “Hey, Frank!” They’re best buddies and just pal around the con, then go to Waffle House. That kind of stuff is just insane to me. To him, it’s all old news. He sent me to have dinner with Barbara Crampton. She was sitting right next to me, and I’m like, “What? I can’t eat Mexican food next to Barbara Crampton. This is not okay.” [Laughs] This is all quite new and insane to me.

FRANKENHOOKER. You would be shocked how many people have no idea what it is! I actually just did the cosplay and one person out of the entirety of Hollywood Boulevard knew what I was. How is that possible? That’s why the drive-in’s important. We have to preach the gospel of FRANKENHOOKER! 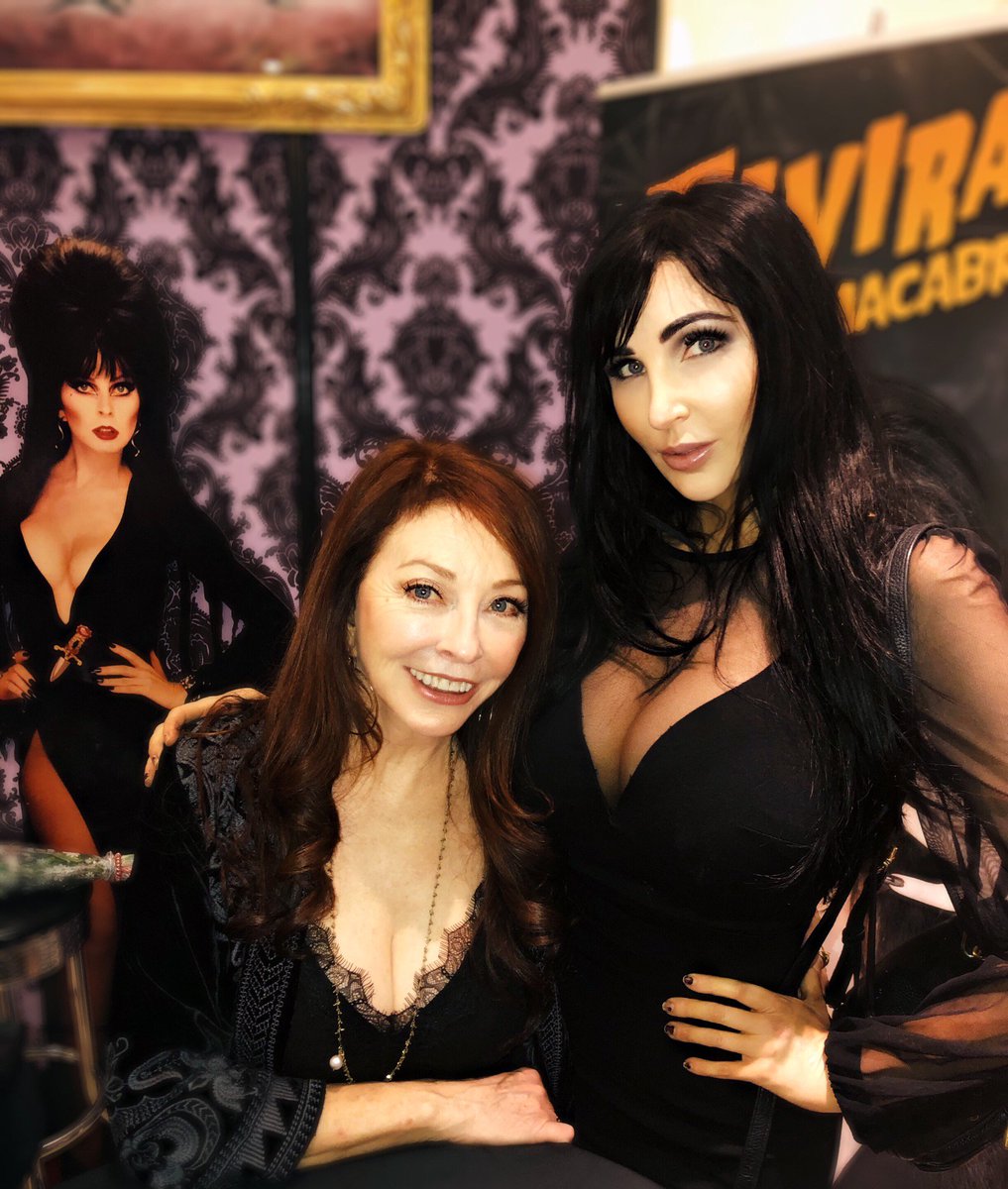 In 2019, many people view Joe Bob and your role as the Mail Girl as regressive, can you speak about that?

I think I’m kind of a feminist version of the Mail Girl, a different take on it. Did you see what they used to be? I’m kidding, but at least this time we get to add a little bit to the character, you know? I very much consider myself a feminist. I’m having fun, and I actually get to speak about the movies—I think that’s a big step in “Joe Bob world.” I’d like to think I balance some of his more chauvinist tendencies…but at the same time, you have to respect the show for what it is. I don’t always see eye-to-eye with him, but I respect his opinion—it’s always a smart opinion. We agree to disagree a lot, and the playful back and forth we have on the show, we are very much like that in real life. So, I respect the tradition of what Joe Bob has built…and keep him in check as best I can. [Laughs]

What’s coming down the pike for you, the show, and Joe Bob?

Well, all I’m allowed to say is, stay up late on October 25th, because there’s going to be a special treat on Shudder. Something big could be going down! Who knows?