In a time when so many horrible things are happening in our real world, it may be worth interrogating the role that horror films now play in our world of entertainment. Is horror an escape from reality? Or does horror thrust us into a kind of hyper-reality, where we are forced to face our real fears amplified to a hundred. For all of us, the word ‘quarantine’ will never have quite the same meaning. There is a reason that when COVID first began, streaming hits for 2011’s Contagion reached record highs. After living through a real pandemic whilst contained in our homes, there may be something truly cathartic in watching characters on screen do the same, particularly if they manage to break out of those four walls in the final act. In Nicole Groton’s DARKNESS IN TENEMENT 45 (DT45), all of our fears about scarcity, hoax paranoia, and isolation from the outside world are pushed to their absolute extremes.

Set in a New York City tenement building in the wake of a Cold War biological threat, the “darkness” in tenement 45 resides in the mind and body of Joanna, a teenage girl who has been dumped into the care of her aunt as the quarantine began. Joanna battles her own internal demons throughout the 95-minute run-time, all while trying to save herself and the other children from their caregivers’ paranoia-fueled violence and control. While DT45’s driving message is certainly one of how isolation and containment can drive anyone a little mad, the film ultimately leaves viewers with its insistent stance that the opinions, needs, and voices of children should be listened to, valued, and acted upon. While parental neglect or overbearance is a common trope in horror, more is said by DT45 about the rights of children to personhood than this reviewer has seen in any horror film to date. 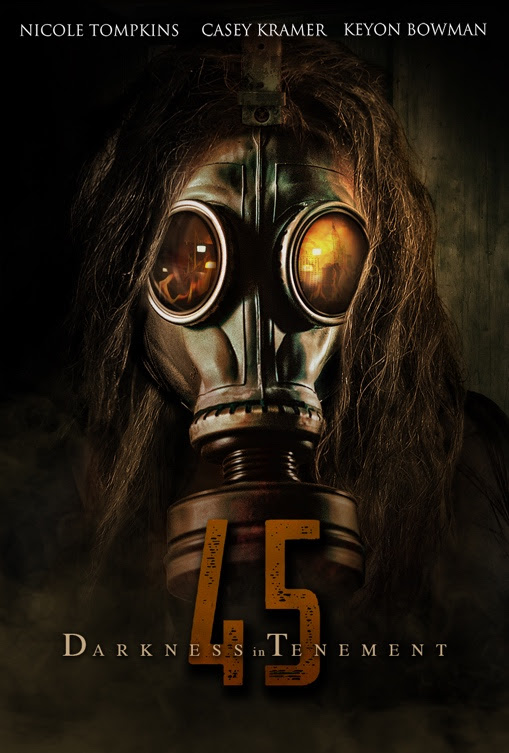 DT45’s style is both bleak and desaturated, save for the Suspiria-esque dream sequences experienced by Joanna as the ‘darkness’ inside her pushes its way to the surface. These moments are the film’s most frightening and engaging, and provide bursts of color that break up the slow build to DT45’s inevitable clash between the children and adults inhabiting the tenement. The film incorporates many of the fears viewers may have had going into quarantine, including food rationing, toilet paper shortages, and agoraphobia. For many young people who had to return to their parents’ homes during quarantine, the feeling of having one’s autonomy restricted may feel familiar as well. Joanna, along with the other children, is prohibited from leaving the tenement building by her tyrannical aunt, even after seeing signs of life outside.

For all its merit, DT45 has some strange moments as well. A particularly uncomfortable side-plot depicting a young poy lusting after his older sisters after being placed in charge of them by their father feels like a bit of an odd choice. However, overall, DARKNESS IN TENEMENT 45 is a strong indie effort from Groton, and includes more than a few visceral sequences of mental and bodily horror. As a deep dive into how isolation, containment, and paranoia impact different personality types and the power dynamics between them, the film is ultimately successful. Viewable on VOD this Election Day, November 3rd, DARKNESS IN TENEMENT 45 is worth enduring a storyline that may hit a little too close to home in 2020.