Exclusive comments/details, plus art: SOV sequel “MARK OF THE DEVIL 666” gets 25th-anniversary DVD

The first feature by indie filmmaker Jason Paul Collum (SOMETHING TO SCREAM ABOUT, OCTOBER MOON) is coming back on a special-edition disc.

Part of the shot-on-video trend of the ’90s, MARK OF THE DEVIL 666: THE MORALIST was first issued on VHS July 7, 1995, and Collum’s B+Boy Productions and Allied Vaughn are streeting the DVD tomorrow to mark the anniversary. The movie stars Karen Dilloo, Mick Wynhoff (AMERICA’S DEADLIEST HOME VIDEO), Lee Worrell and Tami Klamm; the synopsis: “Novice reporter Meredith O’Brien [Dilloo] thinks she’s come across her first big story when she investigates a series of grisly murders. As she forms an alliance with detective Mark Hastings [Wynhoff], Meredith realizes the killer is not only on a witch hunt to ‘cleanse’ society of its ills–but the trail of bodies is leading right to her front door.”

The movie’s killer models the slayings on previous horror films, a year and a half before SCREAM popularized the same idea. The DVD will feature an all-new, 66-minute director’s cut of the feature, along with the following: 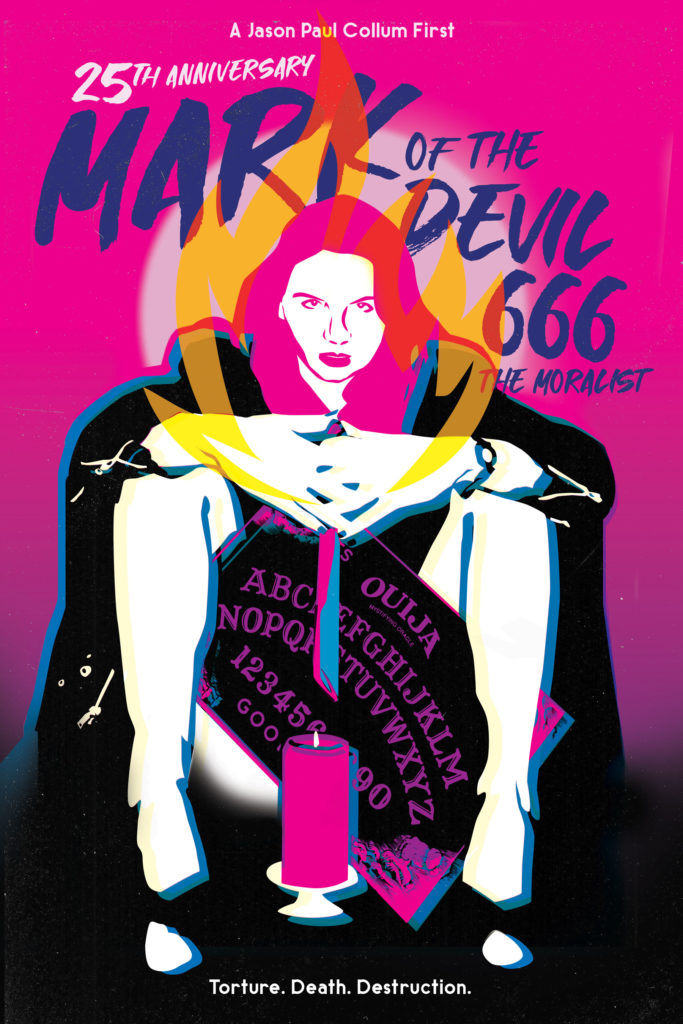 It can be ordered now at Amazon. MARK OF THE DEVIL 666 was originally released by Moore Video/MDM Productions, and grew out of another potential sequel project. “I had been shopping around a spec script for LAST HOUSE ON THE LEFT, PART II,” Collum recalls. “Moore loved it, but they couldn’t afford the sequel rights, so they offered me MARK OF THE DEVIL 666. There was essentially no budget to go with the offer, but it was a chance to make my first full-length movie, so I jumped at it.”

Unfortunately, that initial release wasn’t what the filmmaker hoped for. “The final result was something of an embarrassment, because they butchered the original cut and soundtrack. Somehow it made them some fast money, and then it disappeared. The film became so rare after its initial release that VHS copies have sold on eBay for $150! As this marks my 25th year as a filmmaker, I figured it was the perfect time to dig it up, simply because I get letters from collectors monthly asking how they can find it. It also gave me the chance to make the cut I had hoped for with a more appropriate soundtrack. I was going to leave the original cut ‘lost,’ but my current editor Derrick Carey bullied me into releasing both versions.”