Leif Jonker’s underground vampire-gore favorite DARKNESS is getting a major hi-def makeover from Arrow Video, and we’ve got exclusive words and info from the filmmaker, as well as a look at the new artwork and a promo trailer.

Tonight at Texas Frightmare Weekend in Dallas, TX, Jonker and Arrow Video’s Ewan Cant announced the DARKNESS Blu-ray, which will feature a new 2.5K overscan of the original camera elements. This will be Jonker’s official “Final Cut” of the movie (which was first issued on VHS in 1993 and then on a double-DVD set by Barrel Entertainment in 2006), restoring the early-’90s heavy metal music heard on the initial releases, including songs by Apostasy, The Grunge, Scepter and Knight. Up front will be the artwork seen below, created by Christopher Shy, whose poster work includes MANDY and GODZILLA, KING OF THE MONSTERS. “We weren’t planning to announce the release until July,” the filmmaker tells RUE MORGUE, “but Ewan, I and my crew were all so happy with Shy’s artwork, we decided to push up the date to this weekend,” with posters of Shy’s work available at TFW.

“We really lucked into landing Shy to do our artwork,” Jonker continues. “Ewan and I debated several different potential artists, but finally I rolled the dice and reached out to Shy. Like a lot of horror fans, I had been blown away by his one-sheet artwork for MANDY last year, and was discussing it one day with my friends Geneva and Alanna Arena—who then started sending me links to his other works, and I was absolutely floored. Have you seen his tribute art for Carpenter’s THE THING, GALAXY OF TERROR or HALLOWEEN III: SEASON OF THE WITCH? All spectacular!” (You can check out Shy’s work here.) 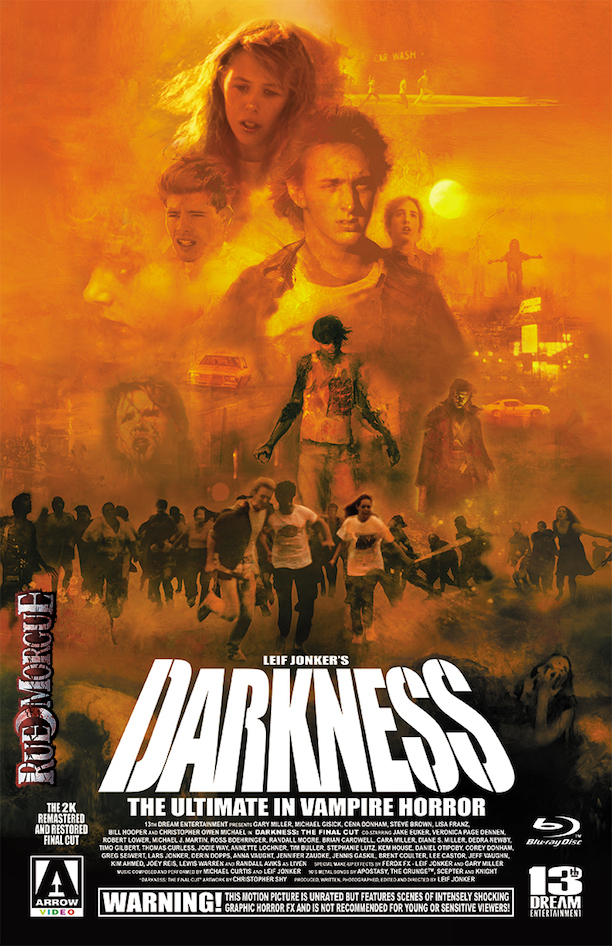 “Contacting Christopher was a total Hail Mary pass,” Jonker adds, “but fortunately he was familiar with the movie, having seen it on video-store shelves long ago. He asked for the 2006 DVD to refresh his memory, and luckily, he really dug it. He’s a kid of the ’80s too, so all the fashions, the cars, the music and the hair really resonated with him, and he seemed to enjoy the hell out of it. When approaching the artwork, he said he realized why I had gone with the ‘iconic’ images of actor Steve Brown as Jodie as a burned vampire with an exposed ribcage, and Randall Aviks as Liven bathed in blue light, for the main promo artworks. However, after watching the movie, he felt that although those were cool images, he wanted his poster to tell more of the story, and that’s exactly what he did. He really hit it out of the park, and all of us were thrilled when we first saw what he had created.”

The Blu-ray will be packed with special features, which are still being assembled as of now. Jonker can share the following: “We will also have the untouched/unchanged original SD VHS version on the disc, and will be porting over the vast majority of extras, commentaries and/or alternate audio tracks I created for the Barrel release. We do plan to record one or two new commentary tracks for the Final Cut and at least one new feature shot in HD.” In addition, the disc will come with a 24-page mini-magazine created by horror-movie host Gunther Dedmund, a.k.a. Joel Sanderson, of The Basement Sublet of Horror podcast. When Jonker learned that Sanderson was putting together a tie-in magazine devoted to DARKNESS, he asked if a condensed version could be used as the Blu-ray booklet; Sanderson agreed, and he’s not the only devotee who will likely be represented on the disc.

“We’ve had many wonderful tributes to the film over the years,” Jonker notes, “including cool artwork like a poster sent to me by my buddy Richard Dean, a comic-book spoof of the movie by Karl Snyder that replaced all of the actors with cats and dogs and a truly fantastic song about the movie called ‘Liven Rising’ by New Jersey thrash-metal band The Donner Party. All of those homages are so great, I’m hoping to include them on the Blu-ray.” For now, he’s especially thrilled that Shy’s work will be fronting the new release. “Gary Miller [FX artist and star of DARKNESS] was so excited about it, he told me, ‘This is the poster you’ve wanted for 30 years!’ And in total honesty I responded, ‘I don’t know about that, but I am very happy it is going to be the poster art for the next 30 years!’ ”

Jonker plans to premiere the newly remastered version of DARKNESS just ahead of the Blu-ray release as part of the ninth annual edition of his October at the Oldtown Horror Festival in Wichita, Kansas. We’ll keep you posted on final content specs and an exact release date for Arrow’s disc edition.