The third in Blood Moon Pictures’ VOLUMES OF BLOOD anthology-film series has launched a new crowdfunding campaign, and has a trio of actresses with horror cred involved. Read on for the info and exclusive words from those ladies.

DEVIL’S KNIGHT: VOLUMES OF BLOOD 3, which will feature segments directed by Brooklyn Ewing, John William Holt and Amber Langston, has launched its Indiegogo page here. The cast includes Ariel Reams, Brittany Picard, Christopher Bower, Daniel Alan Kiely, David McMahon, Donald R. Fleming and the ubiquitous Bill Oberst Jr., along with Lynn Lowry (THE CRAZIES, SHIVERS) and Helene Udy (MY BLOODY VALENTINE, THE DEAD ZONE). In addition, Tamara Glynn (HALLOWEEN 5: THE REVENGE OF MICHAEL MYERS) is on board behind the scenes. 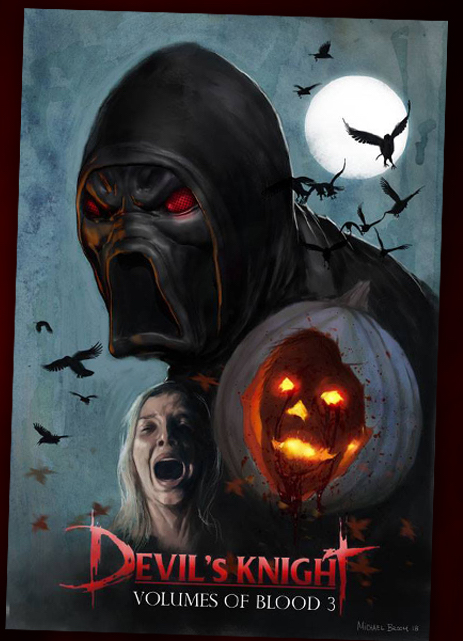 “I’m honored to executive-produce the movie alongside producers P.J. [Starks] and Eric [Huskisson], as I was already a fan of their passion for the VOLUMES OF BLOOD franchise,” Glynn tells RUE MORGUE. “Independent films depend on their devoted fans, whether they’re assisting the project by spreading the news to crowdfunding, encouraging them to actually be apart of the team and secure producer positions with fun perks. Making movies in the indie world, for me, is by the fans for the fans.”

Lowry, who also be seen soon in the RABID remake, served as an exec producer on the original VOLUMES OF BLOOD, and says, “I’ve always wanted to work with P.J. and his group in an acting capacity, and I’m very excited to be involved with DEVIL’S KNIGHT. I love a good horror story—or several in a package. An anthology is one of my favorite things to watch, and P.J. knows exactly how to do them. The story I’m acting in [“A Party to Die For”] is wonderfully bloody, scary, funny and surprising. I hope a lot of folks support this film, because this is one of the most creative and hardworking teams I’ve ever seen.”

Udy, who will also appear in “Party,” adds, “It’s wonderful—and challenging—when comedy and satire are mixed with a really tight and well-written horror story! Plus, any opportunity to be a bit of a bad-ass is always appealing to me. This one has all the elements rolled into one, and I can’t wait to scream and kick my way into this one!”

DEVIL’S KNIGHT is a practical-effects-oriented project with over 40 individual kill scenes. Keep your eyes here for updates on its progress!