Exclusive comments: Taissa Farmiga wants a rematch with “THE NUN”

As her sister Vera returns as Lorraine Warren in ANNABELLE COMES HOME this week, the actress has a desire to return to her own portion of the CONJURING Universe. When we spoke to Taissa Farmiga about her recent Gothic thriller WE HAVE ALWAYS LIVED IN THE CASTLE (see that interview here), she talked about the potential for following up THE NUN.

THE NUN cast Farmiga as Sister Irene, a young novitiate who travels with Father Burke (Demián Bichir) to investigate strange doings at a remote Romanian abbey, where they confront the demon Valak. Irene survived those supernatural horrors, and given that Annabelle is on her third adventure and THE NUN was a box-office hit, it seems natural that Valak/The Nun will return as well. “There have been talks about THE NUN 2,” Farmiga confirms, “but I haven’t really been privy to any of that information. I don’t know where they’re going. Obviously, they’d love to keep exploring this whole universe, and we should put it out there that I would love for them to have me involved again.” 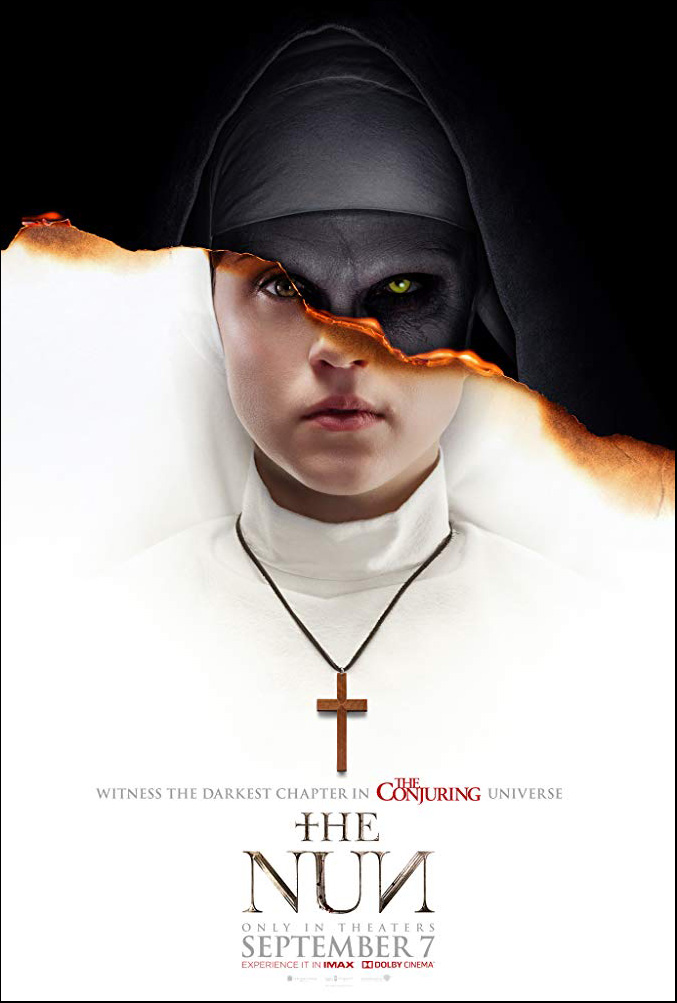 So where would she see Sister Irene going in a second installment? “That’s an interesting question, because it goes back to, what did Sister Irene do at the end? I mean, she took her vows when we were in the abbey dealing with Valak and all that, so does she stick with it? I don’t know; there are so many possibilities, now I’m excited! I can’t say that I don’t want her to keep being a nun—she’s Sister Irene! So we’ll have to see.” And since THE NUN’s conclusion tied its events in with the Warrens’ investigations, there’s always the possibility that the Farmigas’ characters will somehow intersect in the future. “If they do, great!” Taissa says. “I love being part of that world and that family, so I’m game for anything.”

A memorable part of the NUN experience for Farmiga was shooting on the Romanian locations. “They had a kind of creepy, Gothic feel,” she recalls. “We filmed in Bucharest, in some of the studios there, but we were also in Hunedoara and Sighisoara and all these actual places. It was wild, getting to film in castles that were incredibly old and had such history to them. You just feel different being in a room that’s been there for hundreds and hundreds of years, rather than on a set. So much has happened there, and you can feel it; yes, you can recreate a setpiece, but it doesn’t look the same as when you have that grime that’s been building up for years and years, as opposed to someone going in and painting on some dirt.”

When RUE MORGUE interviewed THE NUN director Corin Hardy, he recalled an actual ghostly encounter within the castle walls. “I remember him talking about that,” Farmiga says, “but I didn’t experience anything. I will say that I very much went into that job trying to have good mental strength and not let myself be open to anything happening. At the end of the day when I come home, I don’t like nighttime, I don’t like the dark, and I didn’t like being alone with my thoughts after filming all day with Bonnie Aarons, when she was playing Valak in her full demon costume. So I chose to be like, ‘OK, I not going to think about those things, I’m not going to open myself up to anything; I’m going to do my job and that’s that.’ Also because Vera had talked about spooky things happening on the CONJURING sets, and I was like, ‘Nope, I’m good!’ ”