The New Orleans-born author has won a legion of readers with her supernatural YA novels set in her hometown, and we’ve got the first look at the next one.

THE GATES OF GUINÉE, the fourth in a series by Alys Arden that began with THE CASQUETTE GIRLS, is set for release as a paperback and Kindle e-book January 19, 2021 from Skyscape (with the cover art seen below by Hugo Award-winner Galen Dara). The saga takes place in a storm-ravaged Big Easy and pits a group of fledgling witches, including teenage heroine Adele Le Moyne, against sinister vampires. The synopsis for GATES: “As the Ghost Drinkers seep into the crevices of the Crescent City, leeching the French Quarter of magic, the local witches are consumed with a new fight for survival. Adele has one chance to save everyone she loves, but it will mean breaking away from her coven and trusting a vampire. For the first time in 400 years, Niccolò Medici feels on the precipice of finding his stolen grimoire. But in order to restore his family’s legacy, he’ll have to succumb to his darkest desires. New York transplant and first responder Isaac Thompson will stop at nothing to protect Adele, even if he has to give in to his Spektral magic to unearth the truth about Nicco’s monstrous past.

“For those who choose to pass through the Gates of Guinée, the rules of the Afterworld are simple: Don’t eat the food. Tell no lies. In a whirl of lucid dreams, fetish markets, and ancestral reunions, only those who bare their souls will survive this ghostly hunt, or else they’ll join the land of the dead permanently. Teetering on the razor’s edge between everything she desires and utter madness, only her heart and her magic can lead Adele back home…if only Callisto Salazar hadn’t stolen her Fire, and the most secretive one of them all hadn’t stolen her heart.”

You can find out more about the CASQUTTE GIRLS saga and pre-order THE GATES OF GUINÉE at Amazon’s series page. For more on Arden, head over to her official website, Instagram and Twitter. 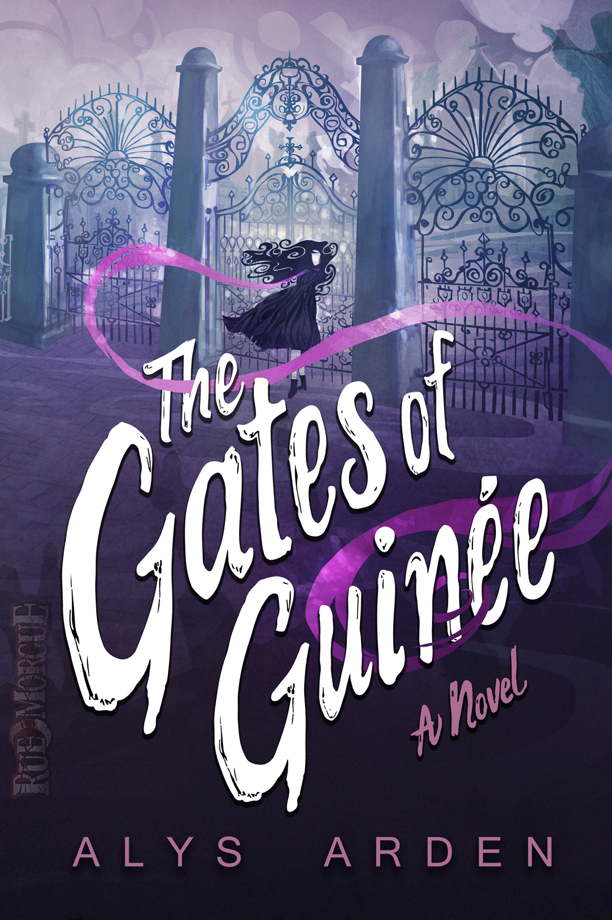 The metallic aftertaste of her blood still tugged at my senses.

The girl lay unconscious against the attic wall in Raúl’s chains, her wet auburn hair even more vibrant now against her pallid skin. Dark circles had formed beneath her anemic eyelids, and her clothes were charred in spots, muddy in others, but the base notes of jasmine from her Dior eau de parfum still drenched her collar.

I set a glass of water on the floor next to her, offering none to Carina or Josif, and stretched out my arm, flexing and straightening my wrist, the newly formed skin taut. It had been at least a century since I’d needed to heal so completely, and despite the pain, or perhaps because of the pain, it was reinvigorating. Or perhaps it was the anxious words Adele had said to me on the Moonwalk: “He knows about the grimoire.”

Callisto Salazar knows about our book of shadows.

Which also meant he must have figured out Adele’s connection to León. What other concern would he still have with her? In my human years, I might have felt panicked by this news—my family’s gravest enemy, a witch now imbued with unprecedented power, going after my ancestral rites—but I wasn’t panicked.

My teeth sank into my bottom lip, pricking blood. I’d spent the last four hundred years looking for that book, but this was the first time I’d felt on the precipice of discovering it. I’d shed my skin under the Flower Moon, and I was ready to devour every last Ghost Drinker if need be.

I tapped Callisto’s ring against the floor, imagining it on Jakome Salazar’s finger, imagining his coven slipping into the darkness, attacking us in our slumber all those years ago. I had been only a child but still remembered the distress echoing through the silent stone walls of the palazzo. How my mother had stashed the four of us in a hidden chamber. How Gabriel and Emilio had refused to stay hidden. How tightly Giovanna had wrapped her arms around me whilst we waited in the cold. It was a lifetime ago. Several. But now, mayhem gave monsters the freedom to stretch, and I was going to rip Callisto Salazar limb from limb.

I didn’t know for certain if I could ever truly get my magic back, but I knew in my blood that if there was a chance, it lay in that book. In that spell, l’elisir di vita. If it could give León, a mortal witch, eternal life, who knew what it could do for a vampire?

I was ready to shed this skin a final time.

The witchling stirred, awakening. She might have borne the name of the Salazar coven, but a true Animarum Praedator she was not. She’d shown her Spektral magic to me twice now, and it had nothing to do with drinking spirits. Her sculpted brows, perfectly trimmed cuticles, and designer blouse revealed her privilege, and I wondered which of her insecurities Salazar had exploited so she’d do his bidding. Had her father not given her enough affection when she was a child, or had she been rebelling against her mother’s fine Southern pedigree when she rode on the back of Callisto’s bike, wind blowing her hair?

Being a witch hadn’t been enough for her, and surely he’d promised her the magical universe.

Traditionally, vampires healed the wounds we inflicted so our victims could slip back into society none the wiser, our dark secrets remaining hidden in the obsidian of night, but the gashes in her neck were still raw. She won’t be slipping back with anyone.

I grazed her silky blouse with my knuckle and then ripped the sleeve with a quick, loud tear.

Her eyes popped open. She looked away from my fangs as she discovered the morose nightmare she’d been having was reality.

“Don’t fret. I’m not going to rip any more of your clothes away.”

She returned her gaze and made a valiant attempt to spit in my face. I grabbed her jaws, pinching, and a sound gnarred from the back of her throat, the snarl of a wild little beast.

“But he might rip off your head,” Carina jeered from her shadowy corner. Moonlight from the window spilled ghoulishly over her cheeks. She was still pale and gaunt from Lisette’s feeding early in the evening. Such a loss of blood would have been life-threatening for anyone but a Ghost Drinker.

Josif grunted from the adjacent corner, but my attention didn’t waver. As I’d suspected, beneath the torn silk, the girl bore a circular Maleficium. The mark of an Aether.

“Annabelle Lee Drake. The witchling who sold her coven down the river Styx. What silver did Callisto offer you?”

“Uncuff me now,” she demanded, only hints of her Elemental persuasion tugging at me to follow her commands.

I smiled. “With my venom still coursing through your veins, you’re going to have to try much harder than that to use your magic.”

Her gaze drifted past me to Raúl’s body across the room. It lay crumpled, his head tossed lazily atop his chest. She tried to preserve her stern expression, but the fantasy—whatever game of house she’d thought she’d been playing with Callisto’s coven—eroded behind her eyes. “He’s going to come for me,” she whispered, gripping onto her increasingly slippery delusions. But then she tilted her chin up, mood shifting, or so she wanted it to appear, and looked at me with bitter virulence. “And you’re going to regret this when he does.”

I huffed a laugh. I could see how Callisto would have admired her spirit. It was unfair to call her naïve, to blame her youth; Carina and Josif had centuries of wisdom and were still taken in by Callisto’s posturing. “I hope he tries,” I said, standing.

And I truly meant it. Taking Callisto within the borders of the Vieux Carré would certainly be easier than infiltrating the plantation he’d turned into his magical fortress—I’d have the full strength of my family.

I was confident in my ability to kill Callisto, but I’d need every vampire with me if I was going to get Macalister LeMoyne back alive as well. My teeth gnashed. Surely Isaac would break the Trapping curse now that Mac’s life was at stake?

I needed a new plan. Magic. A coven.

I wanted her here with me.

My spine stiffened, realizing the pulse was not only mine. I strained, listening, but all I heard was the night’s maelstrom on the streets.

“What?” Annabelle sat up, suddenly interested. “See, I told you Callis was coming for me.”

Screams, shatters, cracks of magic, all muted by the walls of the old house, but beneath it all, there was a little thump. She’s here.

“Oh, that’s not his worried face,” Carina said. “That look means the witch is near. ”

“The one he ripped Raúl’s head off over—”

I ripped off her sleeve, gagged her, and darted into the hallway. Lisette stood hidden in the shadows, staring back in at Annabelle with a mild indifference I didn’t quite believe. There was something else. Disappointment maybe. I closed the door and twisted the key.

The creak of the front gate echoed in my ears. I tore down the stairs, paused at the foyer mirror—just a quick check for blood on my face, my clothes, my hands—sucked back my fangs, and whipped to the door, opening it just as she raised her fist to knock.

She stood before me in the haze of magic under the Flower Moon, her pulse charging. She was damp and disheveled, and she still smelled of river water. It took all my strength not to pull her inside, away from the nightmare swirling in the city.

“We’re going to get your father back, bella.” I knew it was the only thing she wanted to hear.

“And we’re going to avenge yours,” she said, her eyes dark with deadly determination. Something had changed.

She, too, had shed her skin.

I stepped aside so she could pass. Across the street, almost hidden by a fern on the balcony, Isaac’s wings fluttered. Our gazes locked. I swung the door closed and twisted the lock.

I had been wrong before. She was safest here with me.