Exclusive Interview: Actor Aaron Pedersen takes a walk on the dark side amidst the KILLING GROUND 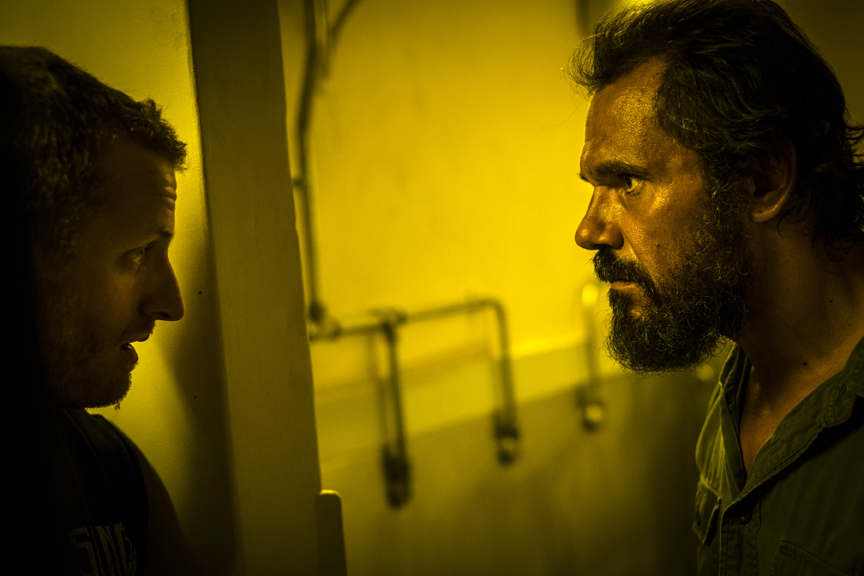 Australian genre cinema has brought us a good share of disturbed and dangerous individuals, and the latest to join the pantheon is German, the antagonist of Damien Power’s KILLING GROUND (debuting today in select theaters and on VOD from IFC Films). Actor Aaron Pedersen, who enacts this savage and ruthless villain, gave RUE MORGUE an exclusive interview about the role.
German is a change of pace for Pedersen, who is of Aboriginal descent and has been acting since the mid-1990s. He’s best known Down Under for playing detectives in a number of TV shows including WATER RATS, CITY HOMICIDE, MYSTERY ROAD and GOLDSTONE (he also co-starred opposite Guy Pearce on the JACK IRISH series and a trio of telemovies). In KILLING GROUND, he’s way on the other side of the law, as German and his fellow miscreant Chook (Aaron Glenane) terrorize vacationing couple Sam and Ian (Harriet Dyer and Ian Meadows) in a remote part of the Australian bush. Writer/director Damien Power’s intriguing dual-storyline structure also reveals German’s involvement with a family who preceded Sam and Ian to the campsite (see our review of the movie here). 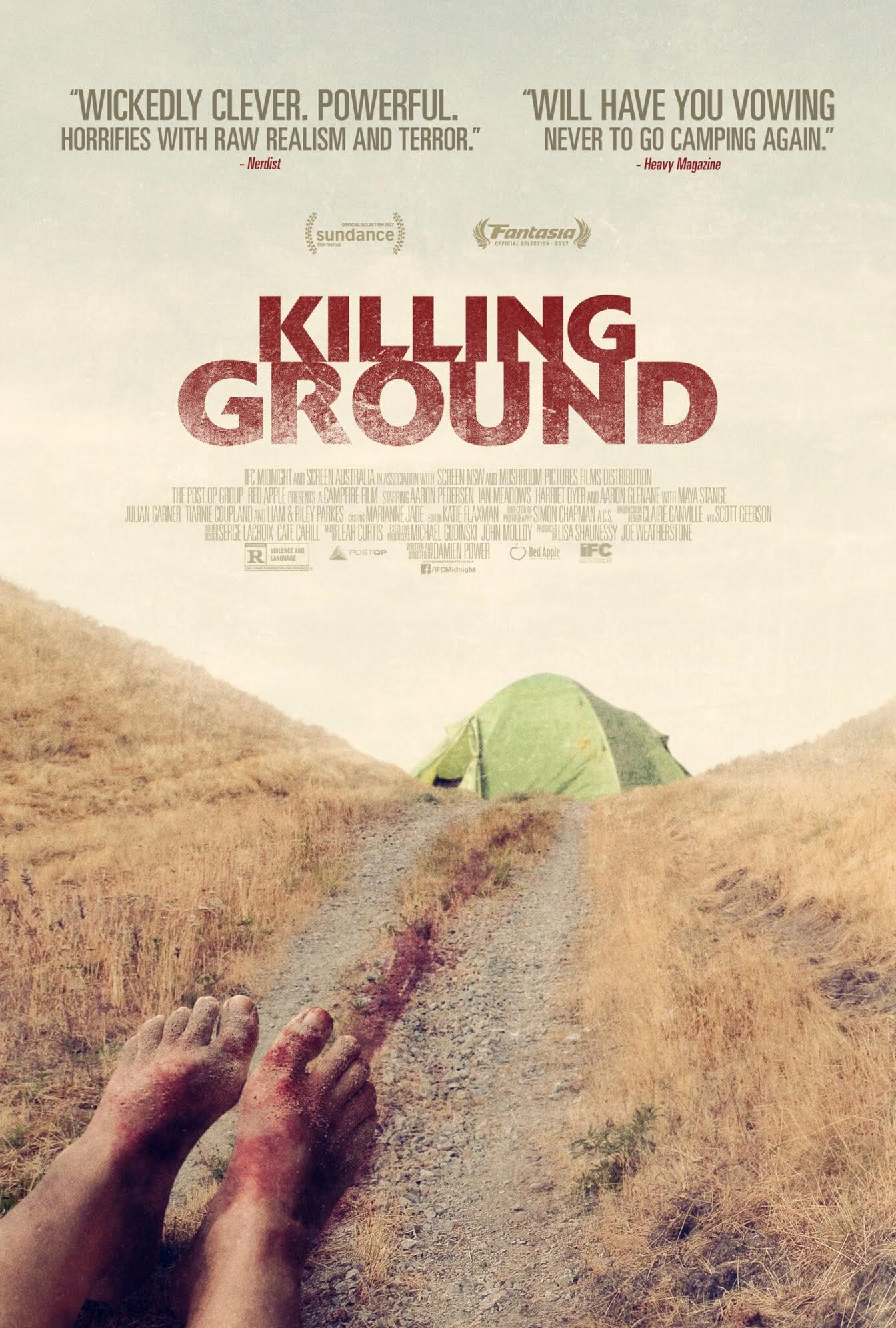 After playing so many law-enforcement figures, did you welcome the chance to be a true villain in KILLING GROUND?
I’ve played quite a few law enforcement officers in my time, so taking the role of German was refreshing. I suppose the whole character change had to do more with the mindset of the people and the world they’re living in. For German, it’s just a place where he was seriously affected by the massacres before, and there was a kind of sickness born into the character. The dialogue and the script itself were fantastic, so I found it very easy to step into the role. I didn’t have too much preparation for it; I just worked with what I had, and that’s what you’ve got on screen.
What were your thoughts on the unusual narrative structure when you read the script?
The nonlinear approach was very interesting. I’d never read a script like that before, and it was intrigued to see how it would work out on the big screen. When I watched it, I really enjoyed the fact that because it’s nonlinear, you stayed connected with the storyline much longer and invest emotion into the couple and into the family who were there previously. It was refreshing; I usually read linear screenplays, and it’s easy to lose interest, but there was no interest lost with this one.
How did you get yourself into German’s vicious mindset?
I had a pre-rehearsal with Aaron Glenane, who played Chook, a night before we shot, but I didn’t get much time to research or look at different cases in the past and the history of Australian crimes. I just sat with German’s personality, and it had to be connected to the character of Chook, so we just talked about the history of Australia and the history and friendship of our two characters. We pretty much went in blind, but I’ve said to Aaron that we had to make sure that we remained interesting. That was the first thing; the other was to deal with each other and find out who these people were, and the depths of their personalities were born out of that. The dialogue and storyline also informed me enough to bring German to life, so I didn’t have too much trouble finding the role. I just wanted to make sure we kept a natural state of mind about it that allowed us to personalize our parts.
I really love Aaron; he’s a great lad and a fine young actor. We really wanted to try something different, and didn’t put too much stress or emphasis, whether we were playing the characters or not; we just focused on whether those scenes were working. And most times, at the end of the day, we would just have to believe in and trust ourselves, and as far as I’m concerned, it was all there. Actors can become their own worst enemies when it comes to their performances and how they’re progressing, so I take the most basic attitude any actor can, which is that we’re on top of these characters and they are coming to life. It’ about trust more than anything, in each other and how the personalities of our roles depend on our relationships with each other. We two Aarons just kind of supported each other in that way.
How did you, Damien Power and the other actors approach shooting the dual timelines, and handle the emotional development within each one?
It seemed quite a natural approach; we didn’t put too much emphasis on the fact that we were jumping back and forth between storylines. We kept it basic. Damien is a great director, so we knew it was a great idea from the start. It was never too much of an issue of whether I was landing my emotions or not; I just made sure that internally, it felt right at the time we were doing it. There weren’t too many complications, and it was one of the easiest shoots I’ve ever had on a film, actually. It was refreshing. I trusted Damien, because he’d had this story in his mind for about 10 years; it was really what he wanted, and we went with that.
Did you have any problems with the location during filming?
Besides the rain at times, there weren’t really any issues at all. I typically had an uneventful shoot at the end of the day; it went very smoothly for me.
Did you have any issues enacting the horrible things German does to his victims?
The beautiful thing about that side of it was that Damien didn’t really approach the crimes explicitly, so we were kept at a distance from what they were doing as well. It’s hard for the audience to be a part of something like that, so we were pretty much dealing with aftereffect images more than anything else, which made it a lot easier for sure. People have to guess and think about what happens, rather than see everything. As an actor, I’ve always believed the audience is intelligent, so therefore you don’t need to sign and post everything for them.
Are you looking forward to playing more villainous parts?
I did enjoy playing German; it was refreshing, and the beautiful thing about being an actor is that you get to delve into different types of people with different lives, and explore these ideas of how they interact with the world. I’ve always been one to try anything, really; I just want to make sure the storylines are strong, and that they’re relevant more than anything else.