Exclusive Interview: Caroline Williams finds the soul of her role in “TEN MINUTES TO MIDNIGHT”

Do you know what it’s like to reach up into the air and pluck magic from the sky? Caroline Williams does.

The genre-favorite actress still rapturously recalls those nights of her youth turning the dial on her transistor radio like a dowsing rod, attempting divination through a veil of static. Or sitting in the back seat of the family car on road trips with her parents, listening, waiting as “one station would fade away and the next one would rise up to take its place” in hope that a sonic pearl would be revealed to her. Though she did not–could not–intuit its form or shape, she believed it existed.

“The world was three channels on television and the radio,” Williams tells RUE MORGUE. “That was the soundtrack of my life. Scrolling through those channels, I just knew, I’m going somewhere. I’m going to find something.”

And then, as if to reward her (high) fidelity and devotion, came a voice–not down from the heavens, but broadcast from a radio tower in the border town of Del Rio, Texas. “Wolfman Jack brought me into this fantastic world of rock and roll,” she recalls. “Everything current, everything new. When the Beatles first broke, that’s where I heard them. I loved it. Late at night, when I was going to sleep, I would have my transistor radio under my pillow, just listening to Wolfman Jack. It was an amazing thing. It was–it still is–magical to me.”

So perhaps it should be no surprise that years later, as an up-and-coming actress, Williams so perfectly and charismatically embodied the role of DJ Vanita “Stretch” Brock in 1986’s THE TEXAS CHAINSAW MASSACRE 2. Or that, coming full circle 35 years later, she turns in one of the fieriest, most nuanced performances of her career as another radio personality, Amy Marlowe, in the exquisitely realized, thought-provoking punk-rock vampiric vengeance film TEN MINUTES TO MIDNIGHT, now on VOD and digital platforms. 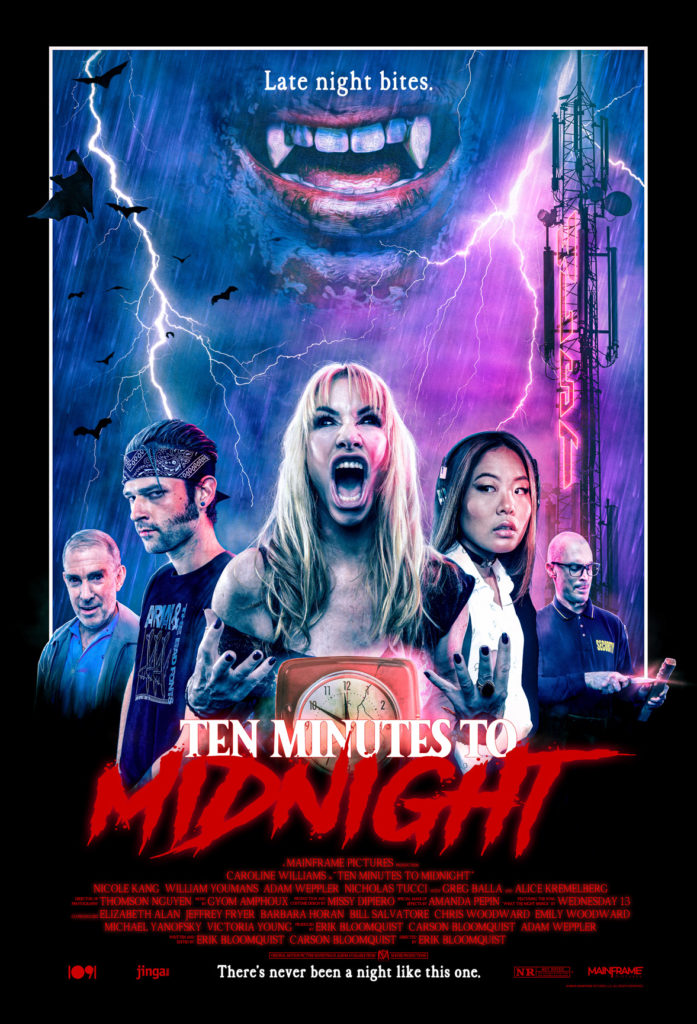 Sometimes, it seems, a role isn’t just a role. Sometimes it is kismet–an echo of honesty and hope and love from the past, from real life, reverberating gloriously through a character and film. “One of the moments in TEN MINUTES that I love the most is when my character is asked, ‘Why do you start your show 10 minutes early?’ ” Williams says. “And she replies, ‘I want to be with people in that moment of transition.’ To me, that’s what you would get from this sort of analog radio life. You’re going from frequency to frequency through that pop and sizzle and crack. There’s a romance to it. It builds a sense of anticipation, and I think that’s what Amy is talking about. She wants to be with her audience when they are in anticipation, because that’s real, that’s valuable–you have to wait for those moments. You can’t just instantly download it and boom, it’s there, you know?”

In a way, TEN MINUTES TO MIDNIGHT (which we review here) is about rage–raging against the dying of that signal, of that romance. Yes, Amy is perhaps acting out in more…well, visceral ways because of a bat bite that seems to not only have affected her perception of reality, but also infected her with a nasty strain of vampirism. At the same time, her transformation occurs at a moment when her lecherous boss (William Youmans) is pushing her out of her gig in a bid to make his radio station younger, hipper. Less prickly. Less real. The soullessness and disposability of the click-hungry Internet age–in the person of up-and-comer Sienna (Nicole Kang)–has come for Amy, but she isn’t going without a fight. In other words, TEN MINUTES TO MIDNIGHT is fun and scary, but also multidimensional, tackling social, emotional and philosophical issues as it jumps between periods of Amy’s life to glimpse into the wrongs and evolution informing the present-day mayhem.

Though Williams has enjoyed a long and extremely varied career–notching everything from CHAINSAW 2, STEPFATHER II and HATCHET III to DAYS OF THUNDER and HOW THE GRINCH STOLE CHRISTMAS to MURDER, SHE WROTE, SABRINA THE TEENAGE WITCH and GREY’S ANATOMY to a Slayer movie–TEN MINUTES TO MIDNIGHT contains perhaps her juiciest, most wide-ranging role ever. And she kills it.

“I definitely realized the huge opportunity I had in playing a character who lives the expanse of her emotional life” within one specific, contained space that is about to be torn from her, Williams says. She goes on to acknowledge the importance of director Erik Bloomquist, who also wrote TEN MINUTES with Carson Bloomquist, in that process. “I told Erik, ‘I need to be directed.’ Sometimes [directors] will just throw you in front of the camera. You’re not getting any guidance from them. They’re thinking about camera angles and lighting schemes, you know? So I said, ‘I don’t want to be Caroline Williams anymore. I want to be somebody else. I want to bring the new life that I’m living now to this role, and I’m going to need you to take me there.’ And he did. He was right by the lens nearly all the time, or he was right at the monitor talking me through every moment.

“That is Erik’s great achievement with me in this film,” she continues. “Erik is genuine. He gets involved in the lives of his actors, their emotional world. The areas where they’re strong, the areas where they’re weak. What they want to pull off in any given scene. So he knew how to bring me into the fold with all these other incredible actors to bring Amy to life and carry her through her journey.”

Of course, it was easier to place her trust in Bloomquist and co. having seen their previous film, the elegant, smart and harrowing psychological thriller LONG LOST. “I actually accepted the offer almost right off the bat”–no pun intended, surely–“because of LONG LOST,” Williams confirms. “The style, the tone, the mood–I wanted to work with people who were able to achieve those things and tell a really intelligent story. That was the hallmark of LONG LOST and, I think, this film too.”

As she was rightly floored by the powerful performances of Nicholas Tucci, Adam Weppler and Catherine Corcoran in that film, the news that the former two would be involved in TEN MINUTES TO MIDNIGHT further sweetened the pot for her. “Those three perfectly brought off that movie,” she says. “I will always be grateful that I got the chance to work with Adam and Nicholas. Really, though, every cast member brought so much substance and subtext to every scene. And working with New York actors, it’s a different approach. They come up doing stage, a lot of live performances. They grow as artists and creators in a completely different way than those of us from a camera environment like you have in movies and television. It was such an honor, such a pleasure, such a learning experience. I think of us as an ensemble cast, and I’d relish the opportunity to act with any of them again.” 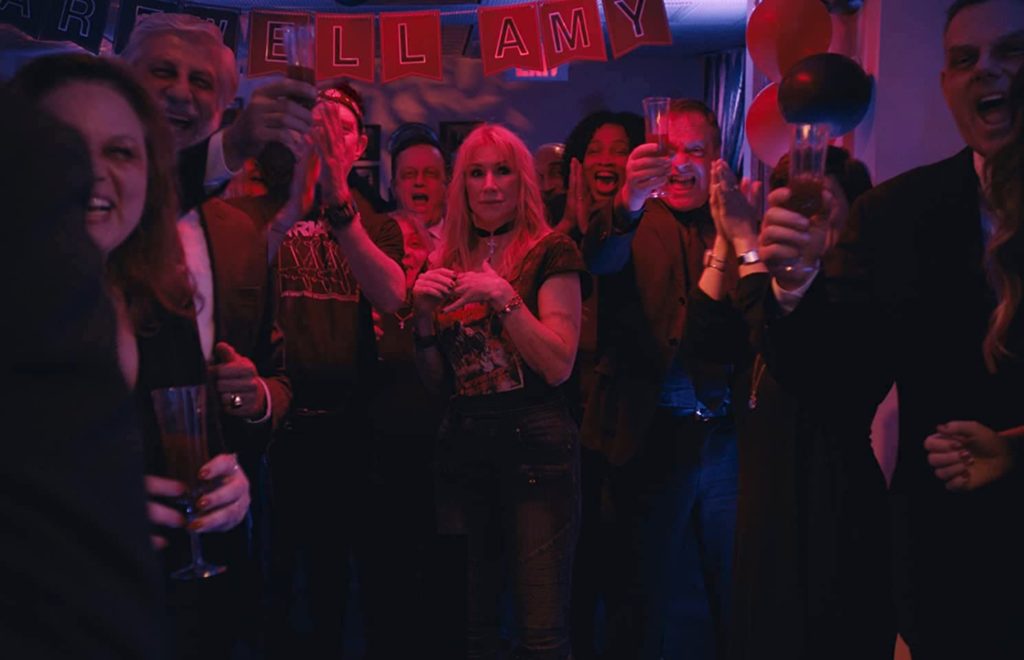 It is also, alas, bittersweet, considering Tucci’s untimely death from cancer at age 38 last year. “I wish we still had Nicholas,” Williams says, “because he had so much more to achieve. I hope people continue to discover the amazing work he left us.”

For Williams, this moment of glory is not a fluke, it is an actualization. “I started my life over four years ago,” she says. “My children were grown. I wanted to get back into the game. I moved into my new apartment the day I started shooting [the horror film] GREENLIGHT. And over these last four years, I lost a lot of weight, I changed my look completely. I wanted to find out who I would be at this stage in my life. I’m 63 years old.”

For inspiration, she looked to another horror actress in renaissance. “I could see Barbara Crampton was achieving a lot and moving more into production,” Williams says. “She’s a big role model for me. Very intelligent and super-talented, obviously, but savvy, too. And funny story about Barbara: She was offered TEN MINUTES TO MIDNIGHT first. She couldn’t do it because she was going to produce the remake of CASTLE FREAK in Europe, and she told Erik, ‘You should give this to Caroline Williams.’ So TEN MINUTES is a gift to me from Barbara, all credit to her. I’m so grateful, because this is an amazing rebirth for me. I’m eager to see what comes next.”

In this respect, the role of Amy is an interesting confluence for Williams: As noted previously, her character is being callously swept aside without any respect for experience or depth of knowledge to make way for the bright, shiny new thing. One can’t help but wonder if Williams sees a parallel between Amy’s dilemma and the way Hollywood treats women of a certain age. Did she, as she defies that headwind with her new roles and new horizons, feel a kinship with her character? “Absolutely,” Williams says, “the difference being that Amy is approaching the end of her life. She’s fighting to stay alive. The way the movie opens defines all the rest of the film, and the progression of what she goes through. One of the things I loved so much about the character is that she revisits her past. I haven’t had much of an opportunity to do that in previous films. And I understood the character in a way that I wouldn’t have if I were younger. You know, the thing with Hollywood is, they don’t even tell you when you’re fired. You just read in the news that your TV show has been cancelled. You don’t get the cake; you don’t get the party. But on another level, yeah, Amy Marlowe’s death is Caroline Williams’ rebirth, and it’s kind of poetic.”

This would be a sweet note to end on, but Williams, ever gracious and inclusive, has one more message for RUE MORGUE readers. “I love being a part of the horror community,” she states. “I love having the embrace of the horror fans. Without them, absolutely none of this would have happened.”