A confined crew is forced to deal with a virulent infection in SEA FEVER, which has its live-stream premiere and general release next week. RUE MORGUE got some words with actress Connie Nielsen about the fest-fave fright film.

Written and directed by Neasa Hardiman, SEA FEVER arrives on VOD/digital platforms next Friday, April 10 from Gunpowder and Sky’s Dust genre label. Ahead of that, the movie will have its live-stream debut Thursday, April 9 at 5 p.m. PT/8 p.m. ET, followed by a Q&A with Hardiman and stars Nielsen and Hermione Corfield; the event will be accessible here. Corfield plays Siobhan, a socially awkward marine biology student who joins Gerard (Dougray Scott) and his wife Freya (Nielsen) on their fishing trawler for a study project. After they encounter a huge and mysterious lifeform in the middle of the ocean, the crew find themselves stricken by a deadly sickness, and Siobhan struggles to determine a way to stop it before they all succumb.

Nielsen, whose credits include GLADIATOR, THE DEVIL’S ADVOCATE, WONDER WOMAN and its upcoming sequel, agrees that SEA FEVER’s scenario seems very relevant to current events, and notes, “I’m from Scandinavia, so I’m kind of good at the whole staying-home thing. I grew up in a place where in the winter, that’s what we do.”

Obviously the coronavirus outbreak hadn’t happened at the time, but was there any thought about those themes while you were making the film?

Yes, there was. We were talking about the monster being an emanation from nature, telling us, “You know, you’re not all-powerful. You should not have any sort of right to master nature. You are a part of this community, and you have to find a way to co-exist.” 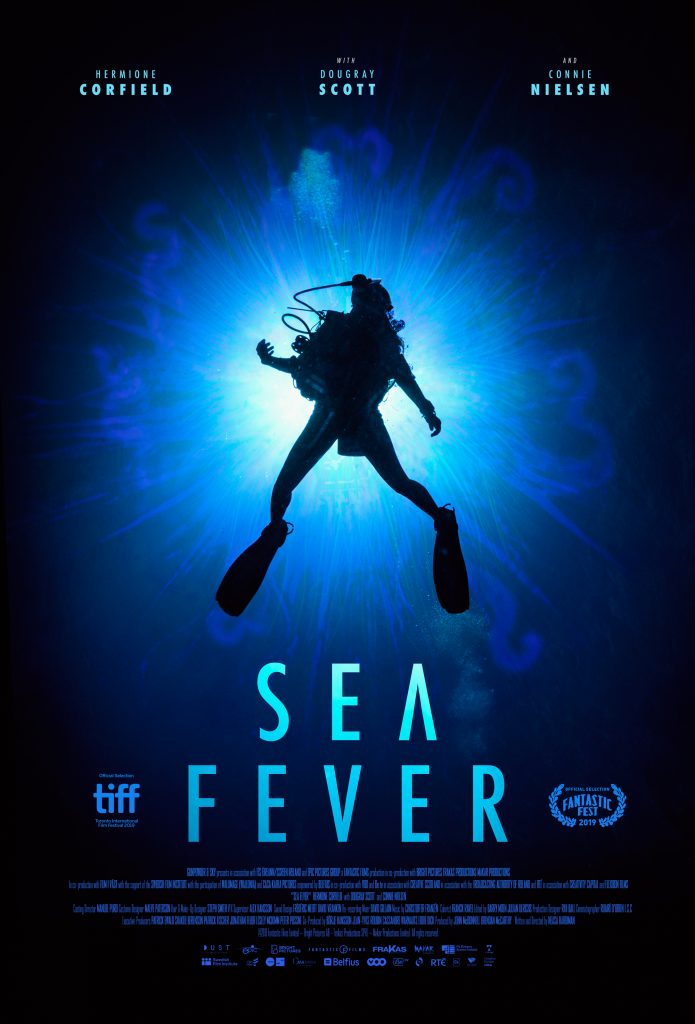 We barely saw the monster, though, so it was really more about creating that feeling that we all have right now, when we’re coming home from the supermarket and wondering, “OK, what did I touch? Did I touch anything infected?” and then going through the house and disinfecting whatever we touched since we had contact with the outside. It was that kind of feeling we had when we were imagining the creature.

How did you become involved with SEA FEVER?

Neasa sent me the screenplay and asked me to do it; she felt that I was perfect for the character of Freya. I talked with her about the fact that I come from a small fishing community, where I lived for a period of nine years when I was a kid. The script really struck a nerve with me; every time I go home in the summer, I see how hard the changes have been on those communities, and how difficult it has been for the fishermen to try to make a living in the middle of that.

Did you shoot entirely on a real boat, or were there sets involved?

The first two days, we shot on an actual trawler, and we got to know the people who operated it, who were just a lovely couple. After those two days, where we were basically just attached to a pier in the harbor, we then moved inside and did the rest of the film on stage. They did a great job with the sets, and we forgot sometimes that we weren’t on a ship, to be honest.

Did you experience any kind of “sea fever” of your own, working on those confined sets?

There was a moment when I really was happy not to have to get into my disgusting, filthy costume again! I literally could not wait to not have to wear the baggy, unwashed clothes that I had on to be as authentic as possible.

How did you work with Hardiman and the other actors to build that level of paranoia we see in the film?

It was all there in the script, and then we all really felt that kind of claustrophobia, since we were up so close together—including with the camera. I mean, the camera crew was having a hard time sometimes, fitting it into these tight spaces. They did a great job. It was good that we were all supposed to look like shit, because the makeup and hair artists couldn’t get in there. They would just say, like, “You look great!” [Laughs]

How was it working with Dougray Scott and Hermione Corfield?

The chemistry with Dougray was natural; it was there from the beginning. We got along famously, and he is truly such a good guy, and fun to do scenes with. He’s an inventive and generous actor, and we fell into this natural rhythm together. I’m also good friends with his wife, Claire Forlani, whom I’ve known for a long time, so it almost felt like a reunion. And Hermione is so lovely, with great energy. You know, she’s a naturally effusive and happy person, so that must have been work for her to get into character every day and be this socially challenged young woman.

Are you a fan of horror films in general?

Well, I don’t like getting scared, and there are some tropes that I find just a little misogynistic, and an excuse to kill women in entertaining ways. But of course, I’m also a huge fan of ALIEN, so I think horror has a broad range. The kinds of horror films I love are more psychological studies and build on tension, not a lot of effects. Those are the ones I really enjoy.