Continuing our exclusive chat that began here, director Corin Hardy gives us further insight into crafting THE NUN, the CONJURING-universe prequel revealing the backstory of the religious demon introduced in THE CONJURING 2. While filming in Romania, he reveals, he had what he believes was a supernatural encounter of his own…

Many horror sequels recently, including those in the CONJURING series, have taken place in previous decades. Is the past a richer environment to explore in horror than the present?

It definitely is for me, and that was one of the things that attracted me to THE NUN when I read it. I don’t know whether it’s because there’s more of an opportunity to create something very visual and striking and of its own cinematic world in the past than in today’s environment. I don’t think this story would have made sense if it was set now, with it revolving around ancient historical buildings inhabited by nuns. And I do find, cinematically, there’s more latitude to create an immersive world and experience for this type of horror movie, and so it was very exciting for me. If it had been set in the present day, and maybe been more of a standard possession story, it wouldn’t have made me so interested. 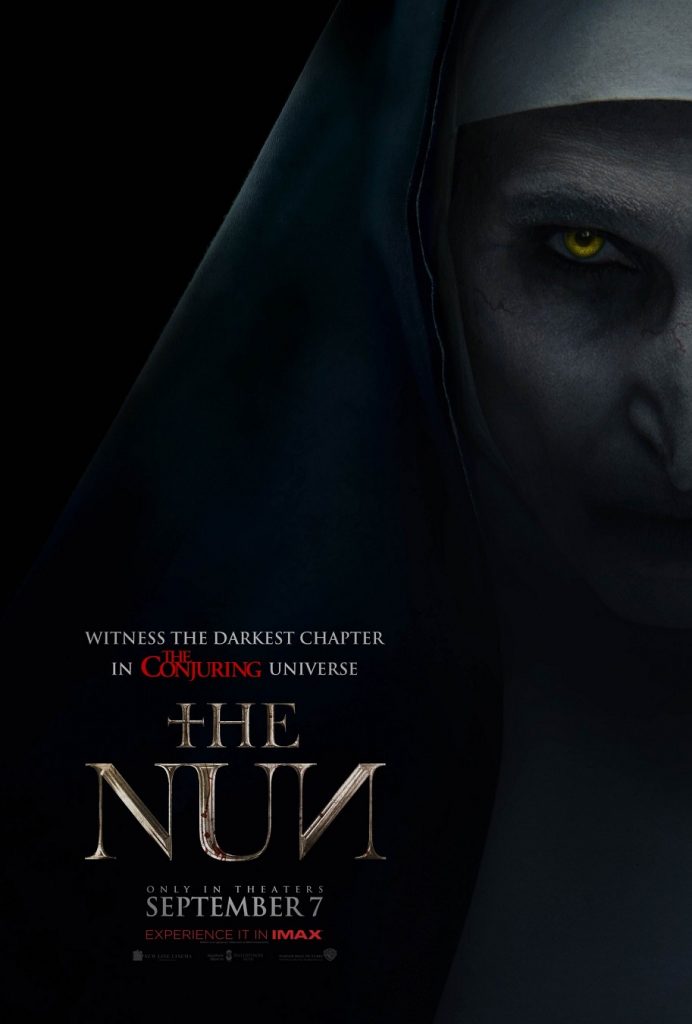 Can you talk about the locations you shot on?

Sure; what’s also really nice is, the movie’s set in 1952 in Romania, and we actually went to Romania, to Bucharest, and shot it there. A lot of the time, a film takes place in New York, and you have to go to Romania because it’s cheap and try to create New York there. So it was nice to shoot a movie in the actual setting. THE HALLOW was like that as well; I wrote it to be set in the wilds of Ireland and went and shot there, so it felt as authentic as possible. And actually, outside Bucharest, we traveled up to Transylvania and filmed a good portion of the movie there, which just felt spiritually right. There’s an interesting, strange, mysterious vibe up there, in the mountains.

We shot in a real castle, in a convent and in an ancient Romanian fortress where I had an encounter with ghosts for the first time in my life. This fortress was where they used to house weaponry, cannons and such, and it’s an underground bunker. We shot a sequence there involving a long tunnel decked out with a lot of crucifixes—a particularly unholy place. The tunnel was a couple of hundred feet long, and I was shooting a shot on a track, with a camera on a crane that was able to move down the track and rotate. It basically sealed off all of the tunnels, so I had to be in a little room off to the side in the dark, watching the takes on my monitors. There was no one else in there; it was a sealed-off room, basically a cell.

So as I walked into it, I saw a couple of men sitting in the room, who I thought must have been part of the sound department, because you find your crew perched wherever they can when a take is happening. I nodded to them and said hi, and they didn’t reply, so I thought they must be Romanian. I turned around with my back for them, and for half an hour I watched the takes of the camera rehearsals till we got something good. Then I was thrilled when we got a good take, and called out to these two guys: “Did you see it? Did you see it? We got it, it was great!” I didn’t hear a reply, so I turned around and there was no one there, and there never had been; there was no way in and out of the room. Quite strange!

Did you shoot in any occupied religious buildings, and if so, were there any problems making a horror film there?

You’re not really allowed to. The castle had its own chapel, and we were allowed to film in that. I don’t think it was a functioning chapel as much as a museum one. We weren’t allowed to shoot in any real working chapels or convents, so we had build our own. We built our own church and tomb room at Castel Studios in Romania—a lot of the interiors we needed to control. We created our own cemetery as well. One of the challenges of the script was that it had so many different locations within the castle, but between the studio and the rural landscape leading up to the castle and back, we got everything we needed.

If THE NUN is a success, would you come back to do another film with the character?

That would be wonderful!

Do you have any idea where you might take her in a sequel?

I would take her to a tropical island, somewhere really nice and warm [laughs]! No, I don’t know; I’d talk to James and Gary, and we’d come up with something terrifying.

Do you think she could work in a modern setting, or does she have to be kept in the past?

Oh no, I do think she could work in a modern environment; I was just pleased that the story we got to tell was an origin story set in the past. I believe she can exist anywhere, as long as there are enough shadows and dark spaces to lose her in.