In 2018, writer/director Aneesh Chaganty and writer/producer Sev Ohanian had a sleeper hit with their first feature collaboration SEARCHING, a “Screenlife” suspenser, told entirely via computer and smartphone images, about a father (John Cho) trying to track down his missing daughter. They have now followed up with the traditionally told but no less tense RUN. (yes, the period is part of the title), though it is nonetheless unique for having an actual wheelchair user as one of its stars. RUE MORGUE got the chance to chat with the duo about this twisted mother-daughter story.

Originally set for Lionsgate theatrical release that got scuttled by the pandemic, RUN. will premiere on Hulu this Friday, November 20. Sarah Paulson (AMERICAN HORROR STORY) plays Diane Sherman, a single mother who has devoted her life to caring for her wheelchair-using daughter Chloe (Kiera Allen)–and expects Chloe to devote her life to her right back. But Chloe hopes to get away to college, and the tension between the two escalates as Chloe begins to discover the extreme lengths her mom will go to keep her within their house’s walls. (See our review of the movie here.)

SEARCHING was a very different story of a parent and a teenage daughter, so how did you come up with this opposite variation on the theme?

ANEESH CHAGANTY: A lot of the work I’ve done before working with Sev has always been about parents and kids, in a way. It was something that came, at the time, very naturally. So in the spirit of doing the opposite of SEARCHING, including that theme, we immediately decided we wanted to twist it to its dark side. The question became, since our stories had been about how a parent’s love for their child and vice versa is always a good thing, is there an amount that a parent can love their kid where it stops being a hug and starts being a smother–can we ask that question in a very dark way? That was a large part of the emotional basis we wanted to build into this movie.​

How did you settle on the idea of the heroine being a wheelchair user?

SEV OHANIAN: I think it was a lot of things, one of which was the desire we always have, and that we try to put in all our movies, which is simply representation. We want to show marginalized people who don’t often get to be in the spotlight, whether it’s a Korean-American man playing the classic role of a father trying to save his child, à la Liam Neeson, or in this case, somebody who might seem like the victim at the start. We wanted to flip that switch and give her the opportunity to become the hero of her own story.

There were a lot of things at play: One was the opportunity to cast someone who wouldn’t usually get the chance to star in a studio movie, and additionally, as it was Aneesh’s first traditional film, the idea was to make a nail-biting suspense thriller where anything can happen and you’re gasping in your seat. We didn’t have to budget to have people flying off of skyscrapers or whatever, so the idea was, can we set it in a domestic home? One of the ways we pitched the film was, it’s half a Hitchcockian suspense thriller and half a prison-break movie. And the idea was, if we’re going to set it in a house for the most part, how do we make this house feel that much more dangerous–not just to you or me, not just for the main character, but for the audience watching at home? So we were able to create situations and scenarios where this young girl is able to overcome just about everything that would have stopped anybody, but it doesn’t stop her. It was a great opportunity to give the heroine a lot to overcome.

How was it transitioning from a Screenlife film to RUN.’s traditional narrative?

AC: Before SEARCHING, I had made a bunch of stuff that took place on screens at Google, where I used to work. So I felt very capable of making SEARCHING, despite the fact that everybody else was sort of learning their jobs for the first time. And then on RUN., it was the opposite: Suddenly, I was the only person who had never made a normal movie, surrounded by a bunch of people who had done this many, many times. So the process to me was just learning how to make a normal film, which is a lot of the reason why RUN. is so simple. It’s only two main characters, one house, one camera, a very, very straightforward narrative, but obviously the goal was to still make it thrilling. In many ways, it was a chance to prove to myself that I knew how to make a movie in the first place.

Sev, coming from a background where you had worked on a number of traditional movies, did that help when you and Aneesh collaborated on this one?

SO: Yeah, it helped in a lot of ways, for sure. But every movie has its own challenges, and no matter what the budget is, or the scope or scale or the size of the cast, in general as a producer, I feel like I’m learning how to do my job every single time. I always feel like I’m ready to quit until we get to day one and I look at the monitor, and I say, “Oh, cool, this movie is real and it’s awesome and it’s going to be great.”

Was there ever even a question about casting an actual wheelchair user in the lead role, and how did you land on Kiera Allen for that part?

SO: Of course there are always questions, but we were very lucky that everybody involved with the movie, including our studio and financiers, Lionsgate, were fully committed to making this happen, no matter what it took. I think one of the misconceptions that exists about working with actors with disabilities is that it’s going to be cumbersome or prohibitive or whatever, and that’s frankly just not true. In our case, we were lucky that we were able to find Kiera. It was a national search; our casting director Rich Delia literally left no stone unturned. All the traditional means of finding actors were obviously exhausted, but then beyond that, we reached out to schools and programs and communities and anyone we could. And after watching what felt like hundreds of tapes, we found Kiera, and she was the one. 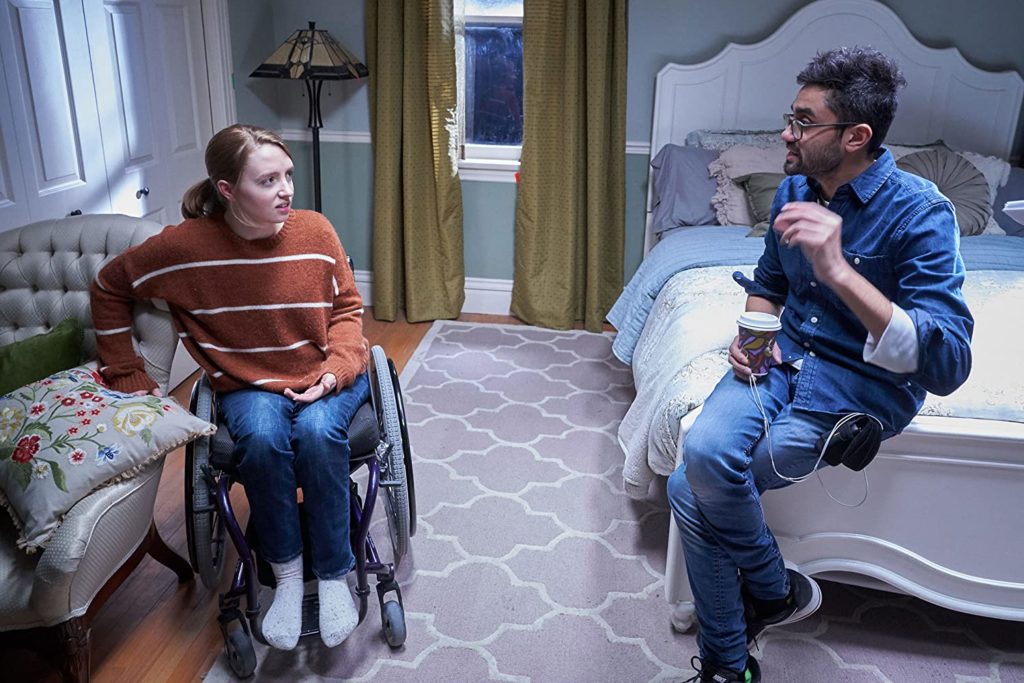 AC: Yeah, it was so easy. We got a tape from her that was basically this girl in her Columbia University dorm room reading lines from the movie, and it felt so natural. We gave her a few notes, she sent us back another tape, and a few days later she was on a flight to California. And this was like, the week SEARCHING was releasing; we were casting RUN. while SEARCHING was coming out, and I was jumping back and forth between casting and some Q&A or something. We had to find our lead in that little gap, and it was awesome; we were watching this star being born. We knew from the beginning; we kept telling her, “You have no idea what it’s going to be like when people see this movie, and they see you in it,” and she was like, “No, no, no…” And now we’re watching that happen.

And was there ever a question of anyone but Sarah Paulson for Diane?

AC: No. I mean, the fact that someone of that caliber was even vaguely interested in the words we had written was enough to just make us go, “Please, close the deal!” It was such a Hail Mary for us to send that script to someone like her after I’d only made one movie, that wasn’t even a normal movie. So to have Sarah, who is objectively one of our best working actors today, be interested in our movie was a no-brainer for us to go forward. We’re very lucky that we got to bring Sarah Paulson into our world.

SO: And what was crazy was, on top of what an incredible actor she is and how giving she was with this movie, one reasons we were lucky was that she also has the most incredible fan base on the planet. Sarah Paulson fans on the Internet have been supporting this movie since day negative-six, and the fact that they are so vocal and enthusiastic, and everything they’ve seen has really excited them–I mean, I went to get into the Sarah Paulson business forever now! We were super-lucky.