This past Friday, Hulu premiered RUN., the critically acclaimed psychological horror feature from writer/director Aneesh Chaganty and writer/producer Sev Ohanian. Below, we continue our exclusive talk with the duo (which began here) about the cast, challenges and unintended relevance of the movie.

Originally set for theatrical release by Lionsgate before the pandemic hit, RUN. is Chaganty and Ohanian’s follow-up to their John Cho-starring “Screenlife” sleeper SEARCHING. A more traditionally told genre film, it stars Sarah Paulson (AMERICAN HORROR STORY) as Diane Sherman, a mother whose love for her wheelchair-using teenage daughter Chloe (newcomer Kiera Allen, who actually uses a wheelchair in real life) has tipped over into psychosis. Anxious to go to college and move on with her life, Chloe begins to realize just how far her mom will go to keep her housebound. (See our review of the movie here.)

What was Paulson and Allen’s relationship like off camera? Did they keep separate to maintain a tension between them, or did they not find it necessary?

ANEESH CHAGANTY: No. The thing is, we were not shooting in chronological order, but based on what was best for the schedule, so for us in the winter, we were obviously shooting all the outdoor sequences first. And they got the chance to get to know each other and become friends and talk before the shoot happened. I remember Kiera would teach Sarah how exactly she gets out of a car, how to fold the wheelchair, how the wheelchair goes in the trunk, and we would do all these little exercises. Sarah is so good, and has done this so many times, that she has a clear way of establishing a rapport with her scene partner. In this case, that scene partner was playing her daughter in the movie, and Sarah, I feel, took a kind of protective role with Kiera, giving her advice in terms of life as well as acting for this film, and that really helped their relationship.

But then, it only helped their relationship on those good days, ’cause on the scary days of the shoot, they weren’t talking to each other! They were both so into their characters that when we were filming those later scenes in the basement and stuff like that, those were actually scary days for everyone on set. The tone and the mood were just intense, and it helped the movie so much.

Once Allen was cast, did she bring any of her life experience to the movie, and suggest changes to the script?

AC: She did. I mean, I’m not disabled, I’m not a woman, so the first thing I had to do was be like, OK, if you have any input, just let us know. Change it, whatever you want. I remember going through every line in the screenplay with Kiera and constantly asking, “What here is wrong? Tell us what’s wrong.” She changed Chloe’s room; a lot of that production design was so important, because in one shot, you’re supposed to see: How does she live? How does she grab things? What objects are at her disposal? A lot of the difficult spaces her character moves through are very, very indicative of Kiera’s input into the story, as well as major moments of the film. Like the final scenes: We spoke to a lot of people, had conversations with disability studies professors, that changed the way we approached the final arcs of the characters and what we were insinuating. We wanted to make sure that the completion of our character arcs was done in terms of character, not from any kind of ability standpoint, if that makes sense.

SEV OHANIAN: And then even from a behind-the-scenes standpoint, Kiera was incredibly knowledgeable, and willing and open to share that knowledge with our cast and crew. I think many of our crewmembers came away from this experience being a lot more sensitive to how to work with people with disabilities, in a way that is genuinely no different from working with anybody else. That was one of the things that kind of gave me chills throughout the process, just the sense of community and family that we became. Like, Kiera often talked with us about, all right, here’s how we do this, here’s how we do that. Kiera is honestly a special person. 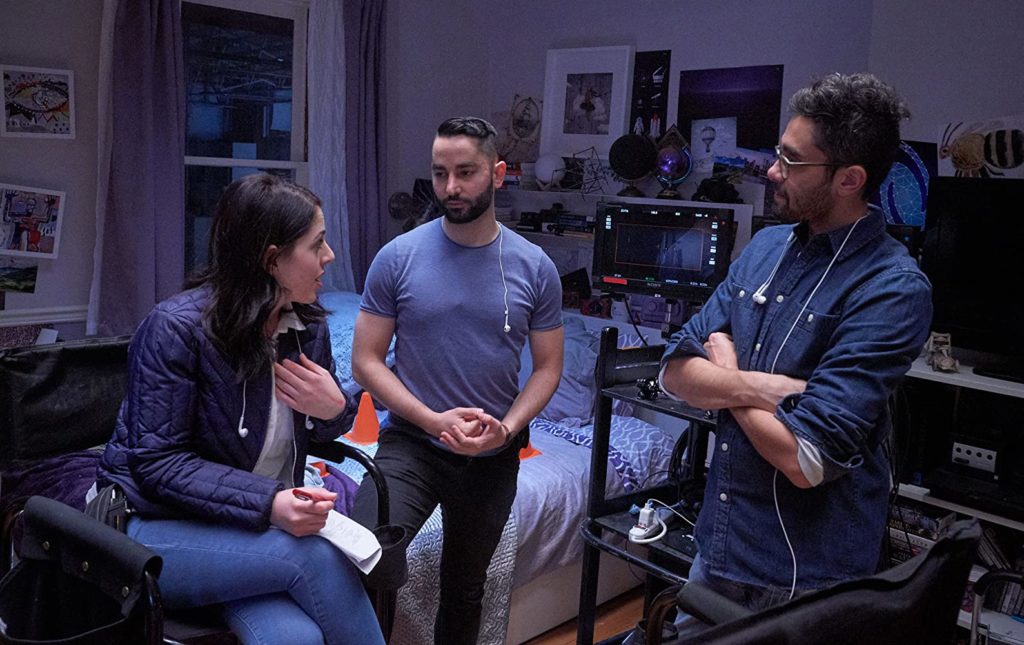 Did you have to build the house, or were you able to find a real one that had everything you needed?

AC: We found an actual house in Winnipeg, Manitoba that was evocative of what felt like a Hitchcock poster. The outside felt so like, OK, there are secrets in here. We used that house for the exteriors and the interiors on the first floor, and then we built the second floor, matching more or less where the windows and walls of the existing house were.

Chloe’s attempted escape seems like it was obviously one of the most logistically difficult sequences, so can you talk about how you pulled that off while keeping Kiera’s safety in mind?

AC: It was a very complex sequence, and we were basically shooting bits of it throughout the entire 30-something days that we shot this film. We shot the main portion of it on the first day, but we used a stunt double, and then we shot the portions with Kiera in them on another day. Obviously, we did not put Kiera on a real roof where she would have been unsafe, but one of the coolest parts was that on the final day, we shot a lot of her close-ups, and they created a set that was the roof of the house, but it was built so that the slanted part was flat, and the house walls were at an angle. She was lying on it flat, we pushed her hair to the side and blew wind on her and stuff. So she was crawling on a flat surface in front of a bluescreen, but when it was finished and cut into the other action around it, it feels so real. It was a very technically complex sequence that involved every department, multiple previsualizations, talking to everybody about it a thousand times–and, at the end of the day, being at the mercy of the weather. It started snowing right when we started shooting that, take one, and I was like, “Shit, there goes our movie!”

RUN. has become accidentally relevant, in that it focuses on a character in isolation, who’s being home-schooled.

SO: Yeah, absolutely accidentally–it was definitely not planned! I mean, this film was originally going to come out earlier this year, on Mother’s Day, which would have been ideal in many ways. But one of the beautiful accidents that happened is, as much as we designed the film to come out theatrically, and it’s made for that audience experience where you’re holding the person’s hand next to you and gasping together, the fact that thanks to Hulu, it’s coming out now on a streaming platform and people can watch it from home is amazing. And the fact that a lot of those people will have spent several months at home with their families, possibly dying to get out as well, might actually be a beautiful thing, because hopefully that catharsis and freedom that our lead character is trying to achieve is something we can all aspire to. Because who doesn’t want to break out right now, and live their lives out there and have that freedom?

Do you have any other collaborations in the works right now?

AC: Yeah, lots. We’ve got a television show we’re working on that’s very, very close to being announced. We’ve got SEARCHING 2, which we both wrote the story for; we’re not writing and I’m not directing, but we’re both producing along with Natalie Qasabian, our other producer, and that’s actively happening. And then most specifically, we’re co-writing the film that I’ll direct next, which is vastly different from SEARCHING and from RUN. We’re just constantly running away from the last experience! So we’ve got a lot of things cooking, but no full meals are available to consume yet.