With THE PRODIGY now in theaters, PET SEMATARY (pictured) opening in April and JACOB’S LADDER and GRUDGE debuting further down the line, Jeff Buhler is seeing several years of screenwriting work coming to fruition. Leaving remakes behind, he has a few more horror scripts cooking, including one that will mark his first directorial venture since 2008’s INSANITARIUM.

Later in 2019, Buhler plans to helm his adaptation of the short story “Best New Horror” from Joe Hill’s collection 20TH CENTURY GHOSTS. “He’s Stephen King’s son, so I feel like I’m stalking his family,” laughs Buhler (who discusses PRODIGY and LADDER here). “The story involves a character that hit so close to home with me, it actually shook me to the core when I read it. His name is Eddie Carroll, and he’s the editor of a magazine that aggregates the best new horror short stories every year. He’s been running this magazine for 20 years, and is barely making ends meet; his wife has left him, and his kid thinks he’s a loser. There’s so much pain and sorrow, and Eddie is wondering if there’s ever going to be an opportunity for him. Then this story comes to him, written by a mysterious author, and he goes on a journey to find that author, because when he reads it, it makes his palms sweat. He suddenly remembers what it was like to be that little kid in a movie theater watching his first horror film, getting that first hit of adrenaline where you’re like, ‘I love this, I want more.’ 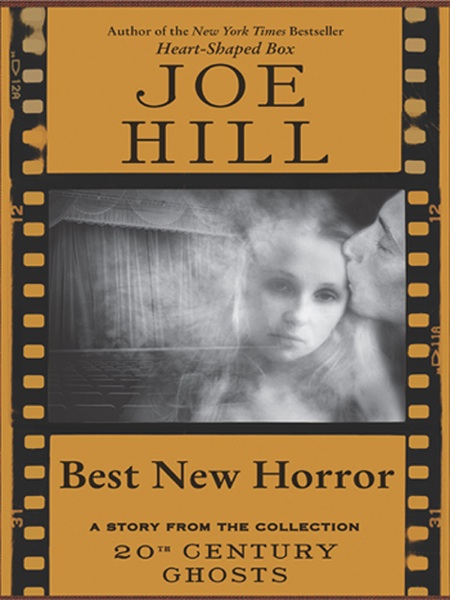 “Having worked in the horror genre for over 15 years, you do get jaded,” Buhler continues. “You’ve read everything, you’ve seen everything, you get to the point where you feel like there’s nothing different out there, nothing that could be exciting any more, and you just start grinding away at stuff, and it becomes soul-crushing. And every now and then, this little gem turns up.”

Such was the case when “Best New Horror” came into Buhler’s life—and he almost turned it away. “I’d been out late one night with a friend, and I was crawling onto his couch for a nap and he was going to sleep. Before he did, he said, ‘Oh, here’s this Joe Hill collection, you should read the first story.’ I said, ‘Oh man, I read so much shit for work, I don’t want to read that. I’m too tired, I’m hung over, I just want to close my eyes.’ He was like, ‘Just read it,’ and I went, ‘No, I won’t,’ and he left the room and I said, ‘Aw, I’ll just look at the first page.’ I started reading it, and of course I couldn’t put it down. I could see myself in this character, Eddie, and I thought, ‘Holy shit, I have to do something with this.’ It just spoke to me and got me excited, so we managed to work out an option deal with Joe for the rights, and then brought the project to Adam McKay’s company, Gary Sanchez, who were very excited about it, so we’re looking at doing that later this year.”

There’s been plenty else keeping Buhler busy lately: “I just did a rewrite of a screenplay over at Lionsgate called AN INCIDENT AT FORT BRAGG, which is sort of an exorcism film. That was really fun to work on. And then of course, I spent most of last year making my first television show, NIGHTFLYERS, for Syfy and Netflix. I got to be the showrunner and wrote three of the episodes, and we’re waiting to see if we’re going to do another season this year.”

Another project he hopes to get going in 2019 is a feature he’s scripted called BLACK RIVER (originally titled THE HELL WITHIN), about a woman searching for a missing girl in the South American jungle. “That has been a passion project of mine for many, many years,” Buhler says. “I’ve been working on rewrites with Barry Films, Slash from Guns N’ Roses is also involved as a producer and we’re out to directors now. The script has gone through almost 10 years of development, and we’ve had many directors attached, and we finally have the package and version we love the most. We’re looking for a female director; it’s a story that involves three strong female characters, and it revolves around fertility and motherhood and power, so we want a woman to take the helm on this one. That was sort of the light bulb that went off in the past 18 months, where we were like, we can’t just slap some horror guy on this. It has to be told from a female vantage point, so we’re now in the midst of finding the right director, and then hopefully that will move forward this year as well.”

Less likely to see fruition is based on a work by another major horror author: DOWN, SATAN! “That’s a story Clive Barker wrote that I started developing ages ago as an adult, R-rated animated feature. It’s absolutely insane; imagine HEAVY METAL in the dark, Gothic Clive Barker world, which was too unbelievably delicious to pass up the opportunity to work in. I wrote a script that I think is compelling, but it’s very difficult to find investors for that kind of thing. Everyone keeps talking about wanting to do an adult animated fantasy or horror film, and then it’s tough to get people to actually invest the money.”

Another Buhler adaptation that probably won’t be realized was based on a book by quite a different literary genre star. In 2013, Buhler was hired by Ghost House Pictures (for whom he later penned the first drafts of the GRUDGE reboot) to rewrite THE AU PAIR, a Dana Stevens script based on THE SITTER, by junior-horror superstar R.L. Stine. “That one is sort of out there in limbo,” Buhler says. “I believe, to be honest, it got caught up in option-rights issues after GOOSEBUMPS came out. There were probably some business things that might have hamstrung that one moving forward. It was an interesting project, because it was one of the few books R.L. Stine wrote for young adults rather than kids, and it’s pretty brutal and terrifying. It was a lot of fun to develop, but I don’t think that one’s moving forward.”