Exclusive Interview: The creators and star of “1BR” on the horrors of apartment living

Any problems you might have had in your living space will likely pale compared to what happens to Sarah (Nicole Brydon Bloom) in the new shocker 1BR. Actress Bloom, writer/director David Marmor and producer Alok Mishra sat down with RUE MORGUE to shed light on their tenant’s nightmare.

Out today from Dark Sky Films, 1BR marks Marmor’s feature debut, and follows aspiring fashion designer Sarah as she moves from a squalid motel into an LA apartment complex in hopes of bettering her life. At first, all appears well, and she’s welcomed by her supers (Taylor Nichols and AMERICAN HORROR STORY’s Naomi Grossman) and neighbors. Then cracks begin to form in their friendly veneer, indicating that this little community lives by rules and a life approach that Sarah will abide by–or else. (See our review here.) We spoke with the 1BR trio following their movie’s world premiere at last year’s Fantasia International Film Festival.

Did this film derive from any personal experiences with your apartments?

DAVID MARMOR: Yes, absolutely. It’s more autobiographical than most people would think. The whole feel of the apartment comes very much from the first place I lived in when I moved to LA. The genesis of the story was my experiences moving there when I was in my early 20s, not knowing anybody. I think it’s an experience a lot of people have when they get out on their own for the first time, and there can be a real sense of alienation when you’re in a new place where you don’t know anybody. LA particularly is a very isolating city to move to, because everything’s so spread out. You spend time in your car alone, going from place to place.

I had that experience of moving into an apartment, living wall-to-wall with all these people, and not really knowing any of them. I would pass them in the hallway and say hi, but I didn’t know most of their names, and it was a profoundly isolating experience for me. It made me wonder what went on in all those apartments, which was one of the inspirations for 1BR. 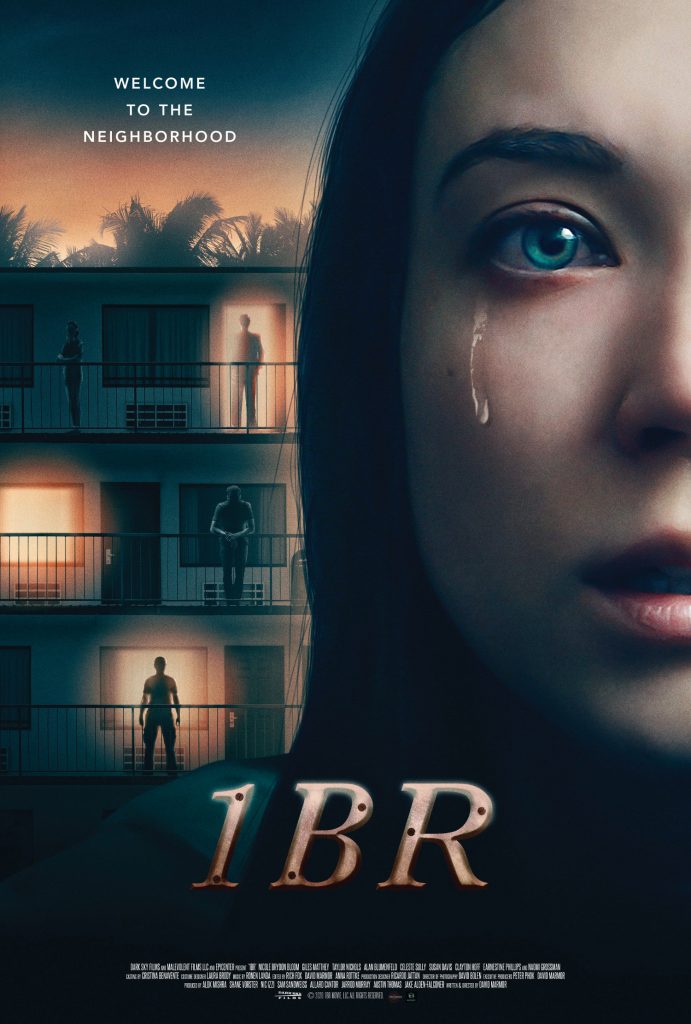 NICOLE BRYDON BLOOM: Well, I graduated from college two years ago, and shortly thereafter I moved to Manhattan and was fortunate to have a lovely roommate [laughs], no issues on that front. But there are aspects of the film that definitely resonate. There’s an insecurity that comes with having a dream and not knowing how to achieve it, so I think everyone can relate to that part of it.

ALOK MISHRA: I personally haven’t had that kind of experience, because I’m from Los Angeles, I went to college there, and right after, my friends came back there, so we were roommates and it was all good. One thing David didn’t mention was that he had a cat, and the building he was in had a no-pets policy, so he was a bit of a rebel in that respect.

DM: Yeah, that was the genesis of that little storyline.

Did you ever get a nasty note about your cat like Sarah gets in the film?

DM: No, I was pretty discreet with it [laughs]. But I would get these looks from the apartment managers, and I had this nagging suspicion that they knew, and they were going to figure out a way to use it against me at some point. There was a real paranoia there; it was not fun to have a cat in that apartment, because I was constantly afraid I would open the door and the cat would get out, and then what do I do?

This sort of horror film could have gone any number of ways storywise, so how did you settle on the specific one you wanted to tell?

DM: That arose organically from what I was trying to get at about apartment life. It could have just gone in a direction of someone being tortured or held captive or whatever, and when I was building the story in my head very early on, I came up with those ideas because I wanted to have the genre thrills, but it never felt like it was actually getting at the real horror of living in an isolating place like that. So the story grew out of the idea of taking this good thing you want—a sense of community, a sense of belonging—and twisting that, and seeing the dark side of it.

Nicole, how did you prepare to play the very intense arc that your character goes through?

NBB: David and I had a rehearsal period, which was nice. We talked through basically the entire script, discussing that arc. It was challenging; it was not material I had worked on before. So there were moments where I questioned: Can I do this? Can I get the horror of it across while also maintaining some sort of sanity? The cast and crew were exceptionally helpful with that. Everyone was very supportive, and it was a creative environment.

It was pretty extreme, but everyone would make fun of me, because we’d be rolling and I’d be super-intense, and then two minutes later I was laughing after they called “Cut,” and they’d say, “Are you sure you’re healthy mentally?” [Laughs] And I was like, “You never know!” But as difficult as it was to get there, it was all about Sarah and what she’s going through, and putting myself in those shoes. In that alone, the writing was so helpful, and the direction and the support I had made it so that it never felt overwhelming or too harrowing.

DM: It was awe-inspiring to work with Nicole on this, because we had so little time, and we had to get things in one or two takes. Just her ability to get where she needed to go so quickly, the level of accomplishment for someone as young as she is was amazing.

How hard was it to find an apartment complex where you could shoot all this stuff?

AM: We filmed, I would say, a total of six days there; the whole shoot was 19 days altogether. They couldn’t have been more lovely, I’ll be honest. They had shot stuff there before, I guess, but it was almost like they were getting money for it or something; they were getting a kickback of some kind! They would be quiet when we were trying to shoot certain things, or you’d knock on the door and be like, “Hey, could you turn the music down just a little bit?” This one dog drove us crazy; we couldn’t get a shot because of the dog, oh my God, every day. It was like, “I will literally give you money to take that dog someplace. Take it on a walk, here’s $20!”

The trials and tribulations of working in an apartment complex are obviously tough, but we were able to get what we needed. The one problem, I would say, was that the complex was very big; there were like two courtyards, so if we wanted to go to one side to shoot something, it was like, 15 minutes and 40 people having to move everything over to this corner. But it had a lot of nice big breezeways, so we could film a lot of great scenes through those.

DM: It gave us a lot of production value, and it felt right for the movie.

AM: It felt very prison-like, very vanilla-looking, and everyone was uniform and got their equal space, so it was as much a character in the film as some of the people.

It seems like there are very few exterior shots in the complex where you can see the sky, and everything is angled down into the courtyard, so it feels like you’re trapped there. Was that an intentional visual approach?

DM: Yeah, we definitely wanted to keep it focused inward and feel isolated. Part of it had to do with the limitations of working on the budget and schedule we were on, but we were able to turn that to our advantage and give it that feel that was appropriate to the story.

So the actual rooms were all sets?

DM: Yeah–they were all one set! We built one apartment set, and then the amazing production design team who built that redressed it to be four different apartments you see in the movie. They did such a good job that when I watch the movie now, I sometimes forget I’m looking at the same room, and I was there!