Exclusive Interview: The creators of “PHILOPHOBIA,” the best new horror film you haven’t seen, Part One

While it’s hard enough for first-time indie filmmakers to get projects up and running, it’s almost equally tough, once a film has been completed, to get it in front of audiences. Such has been the problem for director Tyler Cole and actor-screenwriter Aaron Burt, whose PHILOPHOBIA: OR THE FEAR OF FALLING IN LOVE, while technically released last year, has barely yet been seen by anybody.

That seems particularly unfair given how smart, funny and timely the movie is. It’s the everyday story of low-level slacker podcaster Damien (Burt), who retreats in terror from committing to a serious relationship with Danielle (Emily Pearse), and subsequently has to cope with a visit from his dour college buddy Alan (David Lengel) while being haunted by bleeding-eyed ghouls and creepy Lynchian bartenders. It’s good enough that we wanted to help get the word out, so we got Cole and Burt to talk us through the whole story so far…

PHILOPHOBIA is a great little movie. Why has nobody seen it?

TYLER COLE: It was released in November by a small independent distributor called Gravitas, and they don’t do any press at all, so Aaron and I have been doing all the outreach. We’ve gotten, like, 17 reviews over the months, but we’re still actively doing our own push. It’s the only thing we have. The irony is that actually getting a distributor quite early meant we were disqualified from most festivals, so nobody saw it that way either.

Where did the story begin? How long did you work on PHILOPHOBIA?

TC: We started production in October 2017, and we ran out of financing for post, and we had to max out credit cards and scrap a whole portion of the movie and do reshoots. It took a really long time. We met working together about six years ago, when I was couch-surfing and needed a place to live. I wasn’t really friends with Aaron, I didn’t know him that well, but I asked if I could stay on his couch for like a week. I was looking around for a novel to read, and he kept trying to get me to read a script he wrote–which I didn’t want to do, because I thought if it was bad and I told him, he’d kick me off his couch. I figured I’d read 15 pages and then call it a day, and at least I could say I’d started it, but I couldn’t put it down; I read the whole thing. It was actually a completely different script called STATIC that I hope we get to do one day. So that was the point when we decided to do some short films and hopefully get traction and financing for a feature. 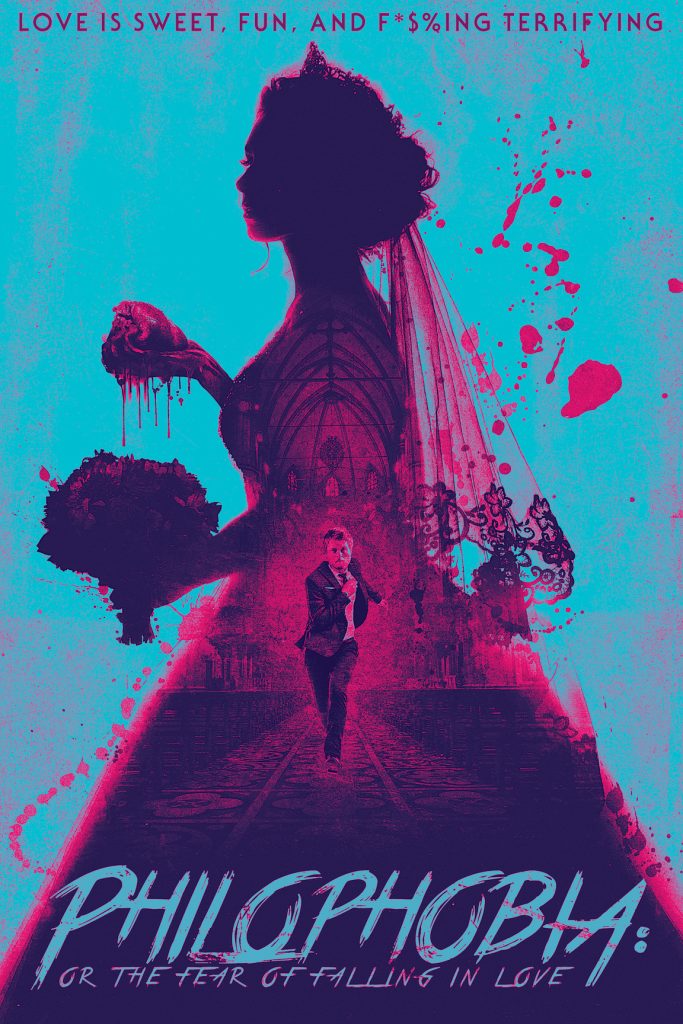 AARON BURT: Our first short was [the original] PHILOPHOBIA, which, er, wasn’t well-received. I still liked the idea, but I didn’t think we’d nailed it, so I wrote a feature version, which was set in a hotel. We were trying to get that made for about a year, and it wasn’t happening, so we abandoned that. Then I wrote a different script that we thought would be our calling card and get us somewhere, but we tried an IndieGoGo campaign and didn’t reach the target. So then I pivoted and said, “What if we made PHILOPHOBIA, but set in the apartment I live in?”

TC: We raised about 20 grand for that other movie, THE PROMISE; about 16 after taxes, I believe. That’s what we were originally going to make, and then we had to tell our backers we were going to make a different movie with their money, and they could have a refund if they weren’t OK with that. We just didn’t think we could do THE PROMISE justice with that budget, but we thought we could do PHILOPHOBIA realistically on no money and make it good.

AB: The movie was made for less than the short, and ended up very different from the script.

What sorts of things did you have to lose? How was the original version different?

AB: The very first one was set in a hotel, and was going to be quite different. We ended up shooting it in my apartment; actually, we combined two apartments. The kitchen, living room and exterior are my place, and then the hallway, bathroom and bedrooms are my friend Harrison’s apartment. There were other shots we had to minimize; we couldn’t get quite as creative as we wanted to, and we were very limited in how we could shoot the horror aspects. Tonally, they were supposed to be more ominous, but in the end we went more Edgar Wright. We wanted it to feel like, quick-quick, fun-fun. We didn’t want to weigh the audience down on this low-budget thing.

TC: I felt bad because our composer, E.K. Wimmer, was phenomenal, and I had him do an entire score for the first cut, and we had to scrap the whole thing and start over. He can use it for something else!

AB: We made it a lot faster-paced, with a more percussive score behind it. The music over the end credits is my friend’s band; in fact, all the music in the movie is by friends of ours. They were all very cool to donate everything.

TC: We also couldn’t make the bar look epic like we intended, because we didn’t have enough actors. It was overnight in Riverside, California, which is a solid 90-minute drive from LA. We couldn’t afford to rent a bar, so we ended up getting one for free by e-mailing 180 bars until this guy said yes. He’s the coolest person ever. He donated his place for four nights for free, but it’s so far from LA that no extras made the drive. We ended up using our crew, which was eight people. The restaurant scene at the end was in Edendale, and nobody showed up for that either. I’m an extra in that scene.

The color palette of the film is interesting; why did you use the sci-fi-esque blue and orange?

TC: A lot of it was trying to be as dynamic as possible. We didn’t have a lot of lights, or a lot of anything, obviously. We had one grip, and our director of photography Tom Meredith helped him light, so it was a team of two. It was going to be super bland-looking unless we came up with something, so we had these hue lightbulbs that would plug into any fixture and you could control them from an app on your phone, so Tom used those to set the mood of each scene. A lot of it was pushed heavily in color-grading too, to make it pop.

You’ve mentioned that a camera company came in and rescued the project at one point?

TC: Yes, Arri really saved us. We couldn’t really afford a camera, and we needed two in order to make this work. I wanted to shoot on the Arri Alexa Mini, but the rental price was like $27,000, which was about half of our entire budget, so that wasn’t going to work. We had shot a pitch video that got us a bunch of stuff for free, including some of our locations. I e-mailed that to them, and put in the subject line that I’d get their logo tattooed on my wrist if they gave us a free camera rental [he did actually get the tattoo the day before shooting started]. So that at least made them read the message, and they watched the short and invited us down to Vegas. It took four months of negotiation, because they’d never really done something like this before. They’d given discounts to big studio films, but not a small $50,000 movie. They had to discuss it for a long time with their legal team, whether it would be possible to sponsor us in that way. But they ended up being awesome; they sent us a full package and included extra lenses and stuff. They were really incredible. They were a lifesaver. 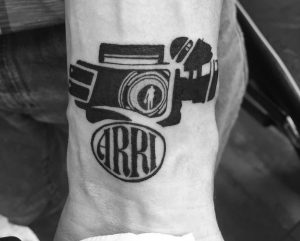 TC: We maxed out a lot of credit cards.

That was the Kevin Smith story, though, right? It worked out OK for him.

AB: Yes, we’ll see if it works that way for us! We don’t have Miramax behind us.

That would have been ironic, given the subject of the movie.

AB: Yes, very bad taste! “A fun, party movie from Miramax about a guy not liking women that much!”