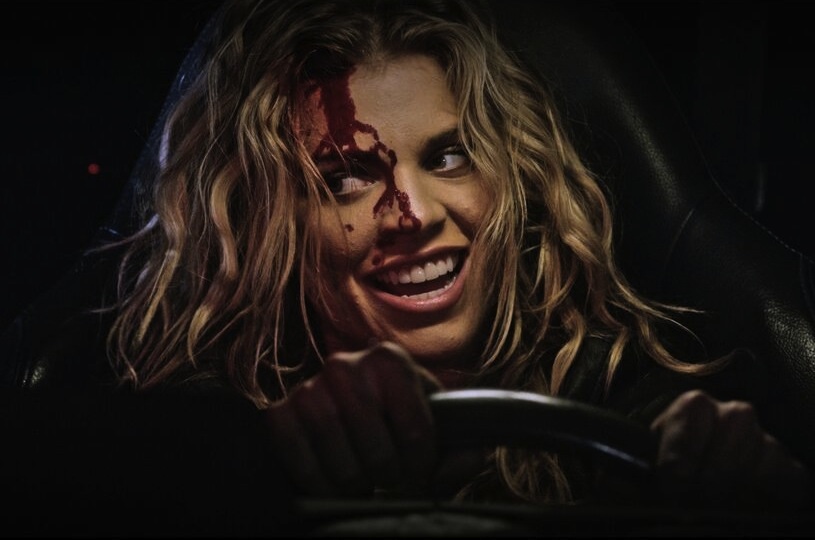 A heist goes awry in splattery, profane fashion in an exclusive excerpt from 68 KILL, a brutal crime shocker from writer/director Trent Haaga (whose scripting credits include DEADGIRL and CHEAP THRILLS) that opens this week. Check it out below!
Based on the novel by Bryan Smith, 68 KILL stars Matthew Gray Gubler, AnnaLynne McCord, Alisha Boe, Sheila Vand (A GIRL WALKS HOME ALONE AT NIGHT) and Sam Eidson. The synopsis: “Trailer-dwelling, sewage-pumping Chip [Gubler] may not lead the most glamorous life, but he’s got one thing going for him: He’s head over heels infatuated with his girlfriend Liza [McCord]. He’s more than willing to overlook her wild streak—the fact that she’s hooking up with their landlord; her rather extreme mood swings—so when she proposes a plot to steal $68,000, he goes along with the plan. But when what was supposed to be a simple heist turns into an off-the-rails, blood-spattered crime spree, Chip learns the hard way just how deranged the love of his life really is.”
IFC Films releases the movie under the IFC Midnight banner this Friday, August 4 on VOD and at New York City’s IFC Center in NYC and Hollywood’s Arena Cinelounge Sunset. At the latter venue, Haaga and McCord will appear in person for a Q&A at the 7:05 p.m. show on Friday.