Beating THE HAPPYTIME MURDERS into the marketplace, the all-puppet horror flick HEAD goes into general release next Friday the 13th. Read on for some exclusive photos and words from the filmmakers.

Launching on several digital platforms (including Amazon Prime, iTunes, VUDU and Tubi TV for North America and over 40 other English-speaking countries) courtesy of Terror Films, HEAD is a homage to ’80s fright fare directed by Jon Bristol, who scripted with J.R. Calvo and Brian Woodman. Bristol, Manda Vasas, Nick Foreman, Mike Finland, Sally Arlette Garcia and Ben Farley head up the voice cast; the synopsis: “Five twenty-somethings go for a weekend camping trip in remote New England, only to discover that the land on which they’re staying was the site of a brutal mass murder years ago.”

HEAD has been playing the festival circuit for the last couple of years, and Bristol feels vindicated by the positive reaction it has received. “There were a ton of people who thought we’d never pull it off, or that we were crazy,” he tells RUE MORGUE. “Even in our own operation, we had a couple of naysayers. Once the flick was completed they changed their tune, and realized this was something good.

“We laughed a lot” during the production, he adds. “Puppets having sex is always a fun day on set, and we had two days of that: our first day of shooting, and then later on our first day on the campsite location. Everyone gets a kick out of naked puppets, I guess [laughs]. It’s both funny and oddly uncomfortable.” This isn’t the first time puppets have had sex on screen in a horrific scenario, though Bristol says that Peter Jackson’s MEET THE FEEBLES wasn’t a specific influence. “We have always worn our influences proudly: the Henson work, Ralph Bakshi, Kevin Smith and even late 1970s/early ’80s horror were all inspirations we were trying to emulate.”

Producer Rick Passmore notes that HEAD isn’t simply a spoof of those ’80s body-counters. “We’re all huge fans of that era of horror,” he says. “The script is very successful at satirizing the themes of that genre—whether it’s the silly dialogue, gratuitous sex or gruesome deaths—but we took care to not step over into parody. We want the audience to give a shit about the characters.

“Making a puppet movie has its perks and challenges,” he continues. “You can create any type of person or character you want, voiced by whomever you want. But from a practical standpoint, it’s even more difficult than a traditional film. Your performers need to see the return monitor—and if you’re unable to have one, the direction is even more strenuous. You can only shoot at certain angles, and people are in uncomfortable positions pretty much all the time without raised sets. All credit goes to the cast; they had to put up with some really tight situations and—almost—never complained [laughs].”

Both filmmakers are thrilled that Terror Films is getting their baby out to the masses, and Bristol notes that it’s just coincidence that HEAD is coming out so close to HAPPYTIME MURDERS. “It was originally written in early 2005, long before The Henson Company even announced HAPPYTIME MURDERS. We had it Kickstarted, shot and premiered all before they shot a single frame. They’re lucky to be riding along for our press and on our coattails [laughs]! At the end of the day, though, the two movies have nothing to do with each other. I do look forward to seeing it, though. I’m just glad to see another group of filmmakers using puppets as less of a gimmick; they are the characters. Puppetry is a medium for telling stories, not a genre. No one asks Warner Bros. how they feel about putting out a new cartoon around the same time Disney does. I would love to see puppetry accepted on film in the same way.” 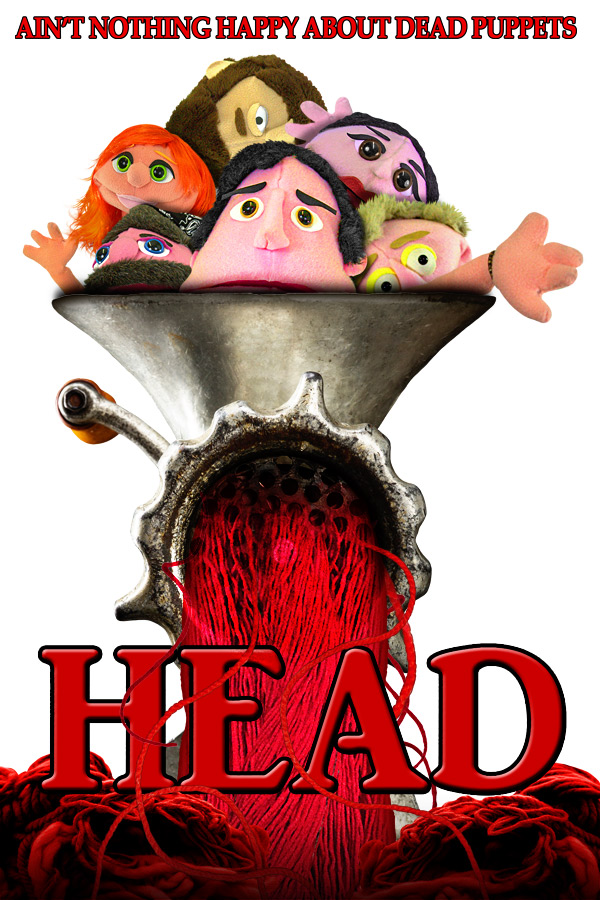