IFC Midnight has the horrific thriller TRESPASSERS coming this summer, and we’ve got the exclusive first look at the poster, along with words from the filmmaker.

TRESPASSERS opens Friday, July 12 at New York City’s IFC Center and Los Angeles’ Arena Hollywood, and will be available on VOD the same day. Orson Oblowitz directed from a screenplay by Corey Deshon, and the cast is headed by Fairuza Balk (THE CRAFT), Angela Trimbur (TRASH FIRE), Janel Parrish, Jonathan Howard and Zach Avery. The synopsis: “Two couples, each working through relationship issues, rent a gorgeous house in the desert for a sex- and drug-fueled escape from reality. Sarah [Trimbur] and Estelle [Parrish] are longtime best friends looking forward to reconnecting after a period apart; their boyfriends, Joseph [Avery] and Victor [Howard], however, are immediately wary of one another. As tensions escalate over the course of a debaucherous night, things take an unexpected turn when a woman [Balk] claiming to be a neighbor with car trouble shows up at the door. She seems harmless enough…or so they think. As the twists and turns pile up, so does the body count in this stylish, blood- and neon-soaked thriller which hits with the furious force of a machete to the skull.”

Oblowitz tells RUE MORGUE, “The style and themes of giallo cinema grounded us throughout the whole filmmaking process of TRESPASSERS, even to the point that I carried Alan Jones’ biography on Dario Argento [PROFONDO ARGENTO] around with me on set. I always saw this film as a continuation of the subgenre, so we decided to reference it in story, costume design, color palette and score. The black leather gloves, neon colors, paranoia, violence and blood that riddled those films and were imprinted in my mind, you see all come together in the poster for the film.” Oblowitz also discusses the movie (originally titled HELL IS WHERE THE HOME IS) here. 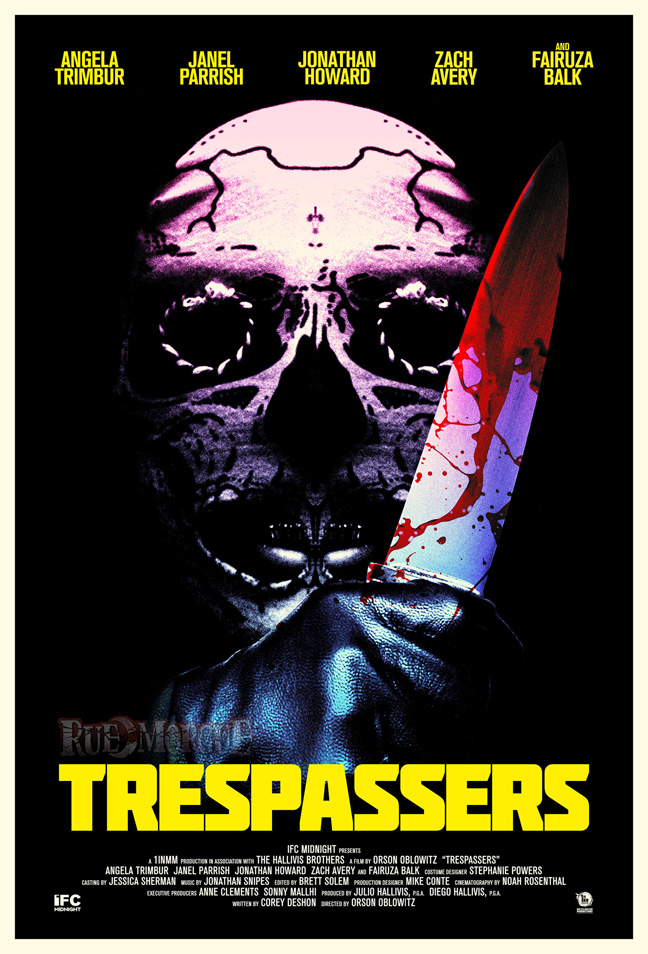