Some may claim that Simon Rumley’s latest work isn’t a horror film, but if an obsessive look into compulsive behavior that leads to mental collapse and murder can’t be considered horror, then what the hell can? In FASHIONISTA (which made its Canadian premiere at this summer’s Fantasia International Film Festival), British filmmaker Rumley completes his Texas trilogy that began with RED WHITE & BLUE and JOHNNY FRANK GARRETT’S LAST WORD. Here, his starting point is his protagonist’s relationship to that most omnipresent but innocuous of human disguises, clothing, and over the running time peels away layer after layer, unmasking the multitude of sinister ways human beings are terrible to one another.

The utterly amazing Amanda Fuller here takes on a role not dissimilar to the one she played in RED WHITE & BLUE: April, a fashion-obsessed female fulcrum point, balanced between her clothing-hoarding boyfriend Eric (Ethan Embry) and Randall (Eric Balfour) a rich playboy who pays women to dress in a way befitting his own social stature. Each character has a pathological relationship to clothing that starts off quirky but is ultimately is a precursor to their demise. 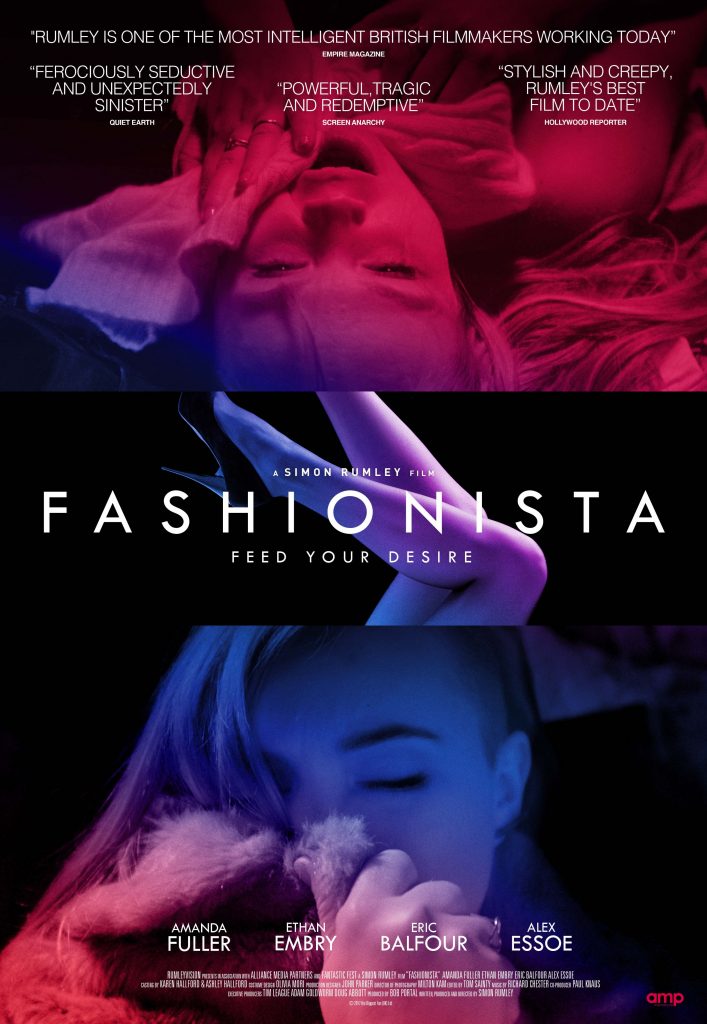 April defines herself by how she dresses, and is never seen in the same outfit twice. She bounces between decades and trends effortlessly, reinventing herself on a daily basis; her only stability is her relationship with her boyfriend. Eric is, in turn, muscular, tattooed and bearded, signifying an alpha-male status that belies his beta-male sensitive side. Together, the two of them explain away Eric’s compulsive collecting that has filled their shared apartment floor to ceiling with hand-me-downs, rationalizing that it’s needed to supply the second-hand clothing store they run together. As the film progresses, it becomes clear that the thread that binds them together is a codependent acceptance of each other’s mental illness, more so than any kind of true love. Or maybe that is true love? Rumley excels at making you ask yourself these kinds of soul-suckingly depressing questions.

FASHIONISTA is easily Rumley’s most technically masterful film to date, making temporal and logical jumps that, while disorienting, are controlled and intentional, using color and contrast to subconsciously bind the viewer to the appropriate timeline. The music too is varied, moving from country to punk and everything in between, effortlessly giving the movie an unmoored quality that explains the end-credits dedication to the cinema of Nicolas Roeg.

The particular quality of a Rumley film is that it often takes a seemingly simple idea and probes it obsessively until every facet has been explored and every chunk of meat pulled from every fissure. In FASHIONISTA, clothing, which we all wear and see everyday, is used to find a new entry point with which to explore that which lies beneath our human costumes, a naked desire to subordinate others. Damn right, this is a horror film.