The environments of director Lorcan Finnegan and writer Garret Shanley’s new VIVARIUM and their previous movie, the criminally neglected WITHOUT NAME (reviewed here), are very different, though the films are recognizably the work of the same team. Both deal with the unease of isolation and take place in settings that are comfortably recognizable at first, and become gradually and inexorably more sinister as they get deeper into their stories.

VIVARIUM, which made its North American premiere at the Fantasia International Film Festival and has been picked up for U.S. release by Saban Films, opens with footage of a post-embryonic cuckoo disposing of its nestmates, signaling one of VIVARIUM’s themes. The basic premise is kind of the opposite, though: a couple of visitors who want to leave but can’t. Imogen Poots and Jesse Eisenberg star as Gemma and Tom, a couple looking for a place to settle down who find an intriguing possibility in a planned community called Yonder. Martin (Jonathan Aris), the Yonder representative who sells them on a trip to visit the place, is mannered and quirky and introduces the strain of uneasy humor that runs throughout VIVARIUM. 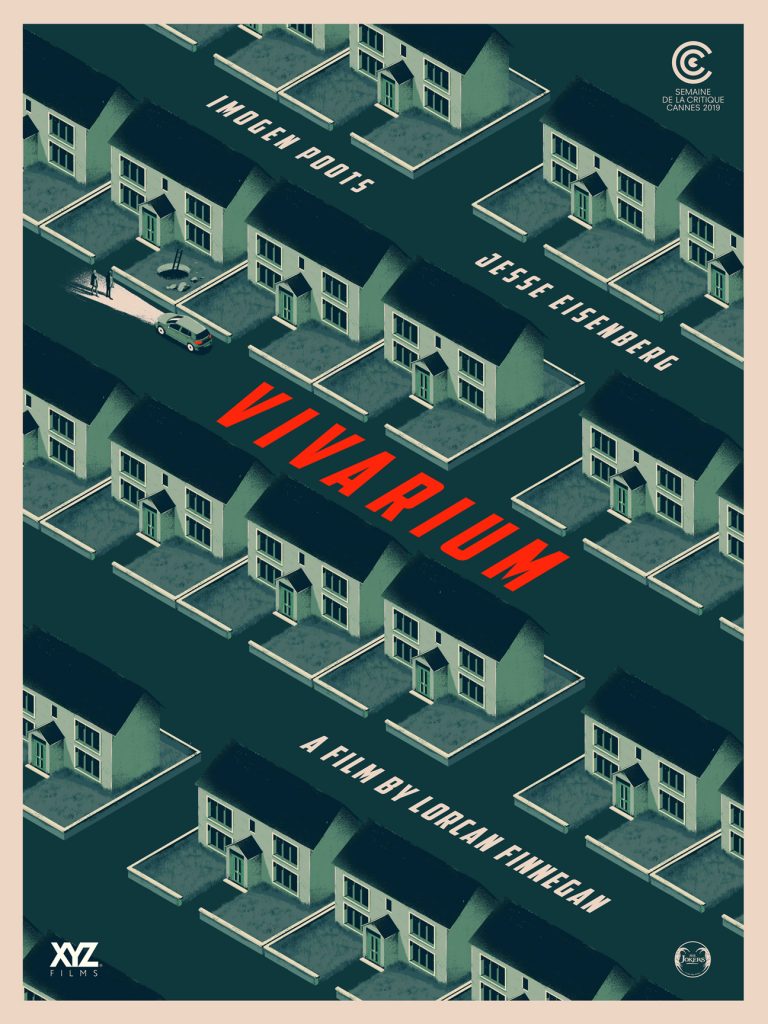 Nonetheless, Gemma and Tom take the drive with him, and are shown into one of the many identical little houses lining Yonder’s labyrinthine roads. The decor is tastefully drab, the outside is painted a green shade just this side of sickly and they all sit under a blue sky peppered with clouds that, as someone points out later, don’t look like anything else but clouds. The whole place, in fact, is void of personality, not to mention people (where are all the other residents?), and Gemma and Tom soon decide they’ve had enough.

Trouble is, Martin has disappeared. No big drama; one moment he’s there, the next he’s not. The couple get in their car and attempt to leave, only they can’t find the exit, and even as they pass countless rows of those maddeningly homogeneous houses, all roads lead back to #9, the one Martin had shown them. Once they have driven their car empty of gas, it’s clear that they’re trapped in Yonder—or, more unsettling, they’ve been trapped there by someone.

What happens to them next is best left for you to discover when you see VIVARIUM, though as the one photo released so far (seen above) indicates, Gemma and Tom have found themselves in a nightmare doppelganger of the suburban bliss they were seeking. And it’s not the kind of nightmare in which they’re assailed by frightening figures, but the type where the world looks normal on the surface yet thwarts all attempts at escape. Their lives soon descend into twisted parodies of men’s and women’s (now outdated) conventional gender roles, with Gemma’s effected by an odd, alternately intriguing and infuriating character played jointly and very well by Senan Jennings and Eanna Hardwicke.

Finnegan and Shanley are pretty much working variations on one metaphor in VIVARIUM, but it’s a potent one, and also identifiable in one way or another to almost any viewer. Even as Gemma and Tom are driven toward despair and madness by their plight, Poots and Eisenberg assure that we stay emotionally attached to them, and don’t give up hope that they’ll somehow figure a way out of their plight. The tone of their ordeal is dreamlike/hypnotic for most of the movie, admirably sustained by Finnegan with strong assist from cinematographer MacGregor, production designer Philip Murphy and composer/sound designer Kristian Eidnes Andersen, before the movie ventures into even stranger and more bluntly scary/starting areas in the final act. Right through to its uncompromising ending, VIVARIUM casts a creepy spell and further establishes Finnegan and Shanley as a team with imagination and command of their craft to spare.