Connecting with a new acquaintance over a shared passion or interest can be a thrilling and wonderful experience. But what if that very same connection is rooted in the darkest, most dangerous part of your being? In his feature-film debut, Argentinian writer/director Martin Kraut explores this idea through the complex journey of two men, bonded by their darkness and the terrifying realities that hide in the familiar.

At the heart of LA DOSIS (a North American premiere at the Fantasia International Film Festival) resides Marcos (Carlos Portaluppi). A night nurse in a palliative care unit for more than 20 years, Marcos is a dedicated employee who takes his job incredibly seriously. Finding comfort in the routine, Marcos eats the same dinner of canned peas every night. He takes the bus, like clockwork, to and from his humble apartment. He consistently denies a sick man his last cigarette and changes catheters with respect. He also routinely carries out mercy killings in an effort to ease the pain of suffering patients. 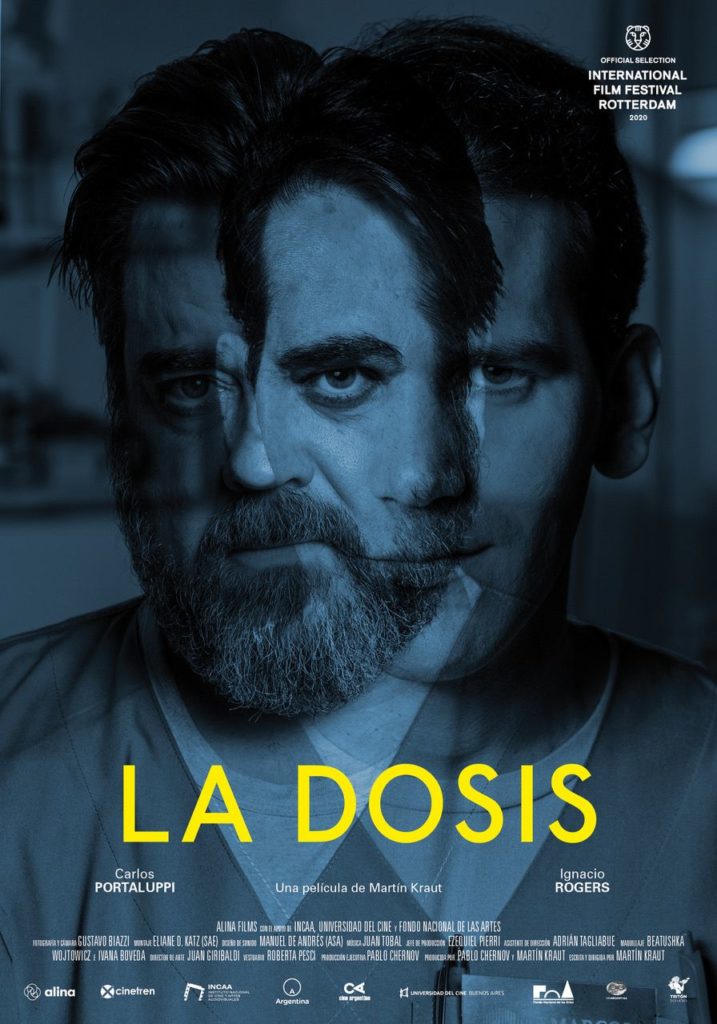 He’s been flying under the radar for years, but everything changes when a young, energetic and mysterious new nurse named Gabriel (Ignacio Rogers) starts working in the unit. As Gabriel quickly endears himself to doctors and nurses alike, Marcos’ hackles raise as Gabriel threatens his territory in more ways than one. Recognizing shades of himself within the young man, Marcos finds his suspicions confirmed when he catches Gabriel injecting a lethal dose of air into a recovering patient’s neck. As the hospital’s death rate begins to rapidly climb, Marcos and Gabriel find themselves engaged in a dark dance of reluctant trust and creeping paranoia as both become bound by their shared secrets.

Methodically and stoically executed, LA DOSIS is a terrifying glimpse into the societal trust we place in health-care workers and the often blurred lines between mercy and motivated killings. Utilizing intense shades of green and blue, Kraut visually highlights his two main characters and the overlapping Venn-diagram segments that exist between them. Nuanced performances by Portaluppi and Rogers add stark levels of realism that instill deep internal anxiety while simultaneously keeping the narrative firmly on track.

Although clocking in at a reasonable 92 minutes, LA DOSIS is a film that feels deep, dense and deliberately paced. Never rushed or forced, it relies on its characters and focused subject matter more than action for dramatic effect. As it seamlessly and casually coasts from one scene to the next, LA DOSIS’ particular brand of tension inevitably won’t please everyone. A slow burn in every sense of the phrase, the film’s execution allows us in the audience to truly feel Marcos’ slowly growing internal struggle as he’s forced to confront not only Gabriel, but his own dark truths as well.

When it comes to LA DOSIS’ horror elements, they do not come from jump scares or killers lurking in the shadows. Instead, Marcos and Gabriel hide in plain sight, preying on (or helping?) those in the most vulnerable positions. Subtle in its performances, pacing and action, LA DOSIS elicits a terror that hits more on psychological and personal levels. As Marcos and viewers alike are forced to navigate their feelings, the churning, uncomfortable psychological conflict is tangible and unsettling. Offering no moral compass or firm political stance, there’s a natural nihilism that permeates each and every beautiful frame of LA DOSIS. And while stunning to look at, the heavy and blatant reminder of our own fragile mortality results in a journey that is not to be embarked upon lightly.