Fantasia ’20 Review: “THE COLUMNIST” reminds you to never read the comments

The Dutch horror comedy THE COLUMNIST has plenty of bloody fun, all at the expense of online trolls.

The film (a North American premiere at the Fantasia International Film Festival) opens with author and columnist Femke (Katja Herbers) going on a panel talk show to discuss civility in online discourse. She is firm that people should be more accepting of differing opinions. The other guest, author Steve Dood (Bram van der Kelen) is far less kind, to both anonymous internet people and Femke. She is upset with the interaction and rightly so. Men are not treated the same by these hateful commenters.

The online comments on Femke’s newspaper column are starting to get to her. No matter how tepid or politically charged, everything she publishes is met online with a visible wall of hate and threats. And she cannot take it anymore. Not only are these posters threatening her and her daughter, but they are giving her a wicked case of writer’s block. With her next book due in just weeks, this cannot stand.

The internet might give these trolls a veil of anonymity, but that veil is thin. With a little digging Femke is able to find out who some of these pests are and, best of all, where they live. She finds that one of the worst trolls happens to be her construction-happy neighbor. After an “accident” on his roof, Femke finds out in one foul swoop that not only does revenge taste sweet, it clears up her writer’s block fabulously.

“The internet might give these trolls a veil of anonymity, but that veil is thin.”

Like any budding serial killer, Femke’s targets are not random and the kills escalate as she digs deeper into her dark side. To her, it all seems worth it. She is writing her book. Her daughter (Claire Porro) is organizing a rally for free speech at school. Her trolls are getting what comes to them. And (the icing on the cake) the handsome man from the panel show turned out to be a nice bloke and a good cook, and has turned out to make a pretty lovely goth boyfriend. What more could a woman want?

There is, of course, a moment where the film pivots from seeing Femke’s punishment as revelatory to downright disturbing. As much of a fantasy as it is to tear into the trolls who seemingly dedicate their lives to spreading hate online, killing sprees should be frowned upon. As the obsession with violence takes over Femke’s life and clouds her judgement, Steven and her daughter are the only ones left to stop her. 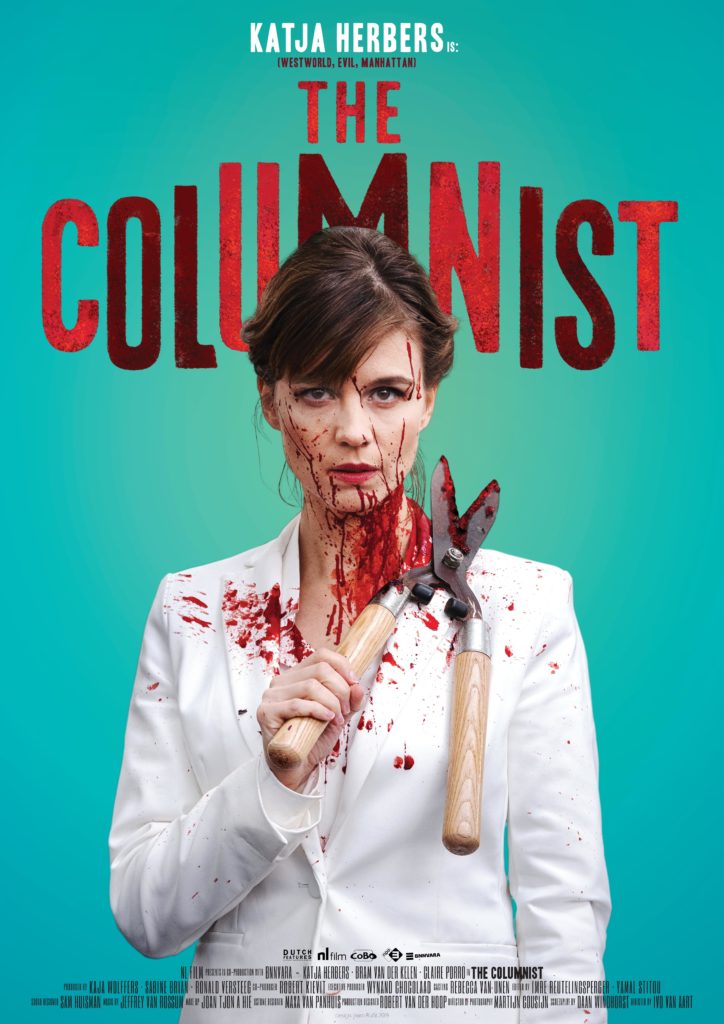 Femke’s indulgent hobby of tracking down internet jerks to kill them is at first played off as brilliant revenge by a woman who has been pushed too far. Most of the actual violence happens just off screen, leaving the uglier side of her rampage to be firmly focused on her declining ethics and not any gore on screen. There is a good amount of death, but overall THE COLUMNIST is much lighter on the messy bits than the poster would lead you to believe.

THE COLUMNIST is a sharp condemnation of those hiding behind their keyboards, hidden inside a hilarious look at a woman pushed to her breaking point. In the end, there are no winners at this game.