Fantasia ’20 Review: Your wish for a dreamily unnerving fear film will “COME TRUE”

The opening minutes of COME TRUE introduce us to the spooky dreamscape where teenage Sarah (Julia Sarah Stone) has been spending too much of her nighttime. Writer/director Anthony Scott Burns doesn’t overplay the eerie imagery; we see just enough in the early going to understand why what should be the comforting act of sleeping is intensely troubling to her. Then, when she first wakes up, she’s not in her own bed, or any bed, and with quick scenes and a minimum of dialogue, Burns conveys why she doesn’t want to doze off at home.

There’s a cinematic intelligence at work from the beginning of COME TRUE (which world-premiered at last month’s Fantasia International Film Festival) that elevates it well above your average nightmare-oriented fright flick. Shot in the chilly climes of Alberta, Canada, with cold and clinical, blue-suffused lighting–Burns also handled the cinematography and editing–it’s more akin to the work of his fellow countryman David Cronenberg, with its theme of institutional science victimizing those it purports to help. In Sarah’s case, she discovers a posting about a university sleep study and volunteers to take part, donning an outfit resembling a spacesuit, overseen by a small team of mostly young researchers who won’t give her basic information like why there are more males taking part in the program than females, or even exactly what they’re studying. There’s something vaguely dubious and unsettling about this group, even though there’s nothing overtly worrisome going on at first.​ 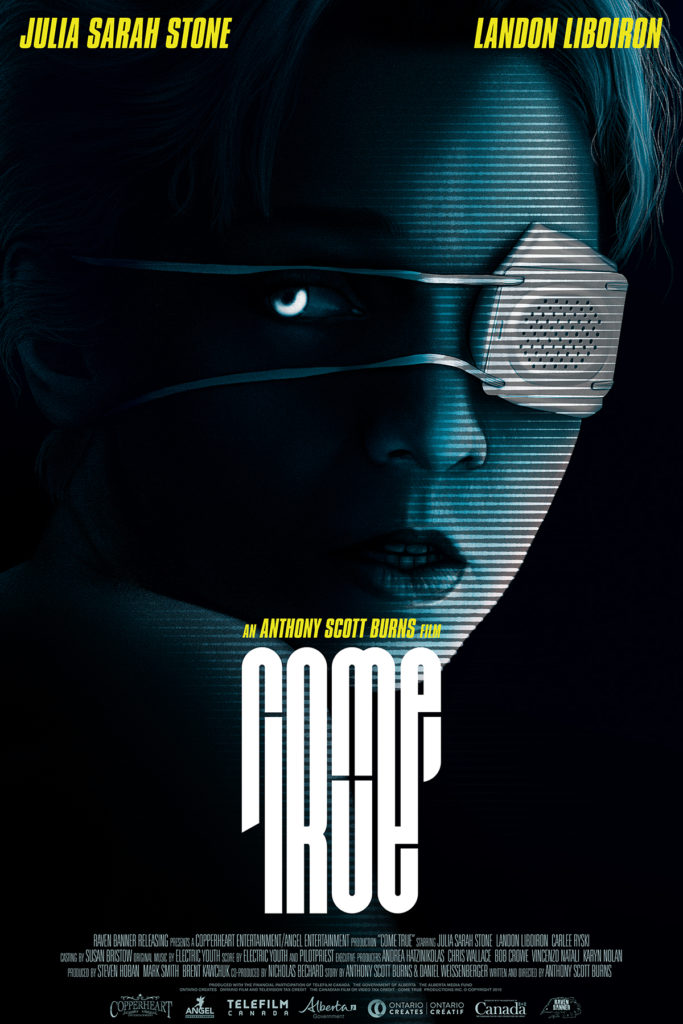 Keeping us intrigued with the team’s activities, dispensing more trips into Sarah’s nightmare world and backing it all with the evocative sighs and tones and beeps of the synth score by Electric Youth and himself (as Pilotpriest), Burns above all holds our attention via his heroine. Her cropped, dyed-blonde hair establishes Sarah as unconventional, yet neither Burns nor Stone (previously in Geoff Redknap’s underrated invisible-man thriller THE UNSEEN) overstate her outsider status. While Sarah’s situation has made her understandably defensive, she always keeps our sympathy as the tests she hopes will ease her suffering only wind up making things worse. The dreams haunting her and her fellow subjects become increasingly dark and disturbing, with Burns emphasizing the abstract over elaborate special-effects setpieces (oh, and he headed up the film’s VFX too). The menacing figures who show up in them are akin to the shadow-men reported by those afflicted by sleep paralysis, who have turned up in a few other horror features and explored in more depth by Rodney Ascher’s documentary THE NIGHTMARE. (Burns sneakily acknowledges Ascher by having Sarah wind up in a hospital’s room 237.)

COME TRUE successfully explores its hi-tech subject matter with a down-to-earth vibe–the computer screens we see flicker like they used to in older movies–and there’s just enough exposition to allow us to understand the science while we’re constantly kept guessing about where the story is headed. Burns consistently does a lot with a little (he can convey a key narrative point via a simple moment of three researchers all entering the office of head doctor Meyer, played by Christopher Heatherington), as he delves into big ideas and increasingly unsettling territory. He has an eye for eerie architectural settings and conjures up haunting setpieces, like one in which Sarah gets a good look at what’s on another character’s mind, that help the movie over occasional bumps in the narrative road, like an unfortunate later development between Sarah and scientist Jeremy, a.k.a. “Riff” (Landon Liboiron). The ultimate endgame has elicited divided response among critics so far, though it totally worked for this viewer–it’s a shivery variation on a classic genre trope, and absolutely the right way for Burns’ engrossing and intellectually stimulating mind-messer to sign off.