Fantasia ‘22 Review: “Dark Nature” is a Creature Feature Worth Exploring

The dichotomy of nature is fascinating. For many, it is a place to escape, reconnect and refresh. However, it can also be dangerous, violent and cruelly pragmatic when surveyed through the human experience. In the new film DARK NATURE, Métis writer and director Berkley Brady explores and expands upon this idea while blazing new trails.

Recently making its world premiere at the Fantasia International Film Festival, DARK NATURE starts simply enough. After she’s physically assaulted by her partner, a traumatized Joy (Hannah Emily Anderson) struggles to heal emotionally. Even after months of separation, the memories of her ex’s heinous actions and violent temper haunt her. To help, her best friend Carmen (Madison Walsh) takes her on a healing wilderness retreat organized by her therapist, Dr. Dunnley (Kyra Harper). After the pair meets up with Dr. Dunnley and fellow campers-clients-survivors Tara (Helen Belay) and Shaina (Roseanne Supernault), the group sets out for the Rocky Mountains.

Not long after they embark, Joy finds her intrusive thoughts and traumatic memories have not just followed her into the forest, they have intensified. Visions of her ex seem to lurk in the shadows while auditory triggers echo in her ears. While Joy and Carmen initially chalk it up to stress and the outdoor venture, their opinions soon change as Tara, Shaina and even Dr. Dunnley experience similar situations. Before long, the women realize they are being hunted by something much more sinister and physical than their trauma.

Beautifully lensed by cinematographer Jaryl Lim, the Canadian Rocky Mountains are captured in all their glory. Miles upon miles of forests surround the women as they trek through rocky ravines, riverside pathways and treacherous thickets. This overwhelming presence becomes even more impressive when one realizes none of it was photographed by drone. Instead, Lim and the entire crew climbed mountains, scampered up rocks, hunkered down in the foliage and waded through water to make each shot possible. More than just a fun filmmaking fact, this rigorous and intimate approach amplifies the group’s isolation and situation by injecting a palpable and substantial level of realism.

One of the best parts of DARK NATURE is the tight relationship between Joy and Carmen. Acting as an effective counterpoint to the expansive landscape, the genuine chemistry between Anderson and Walsh raises the emotional stakes. As Carmen becomes increasingly frustrated with Joy’s seeming lack of interest in healing and slow forward progress, their friendship reaches a crossroads. Brutally honest with each other, the mutual respect they share tempers the heavy topics, new boundaries and serious issues they discuss. It’s a side of friendship not often discussed well in film, but it feels refreshingly earnest here. 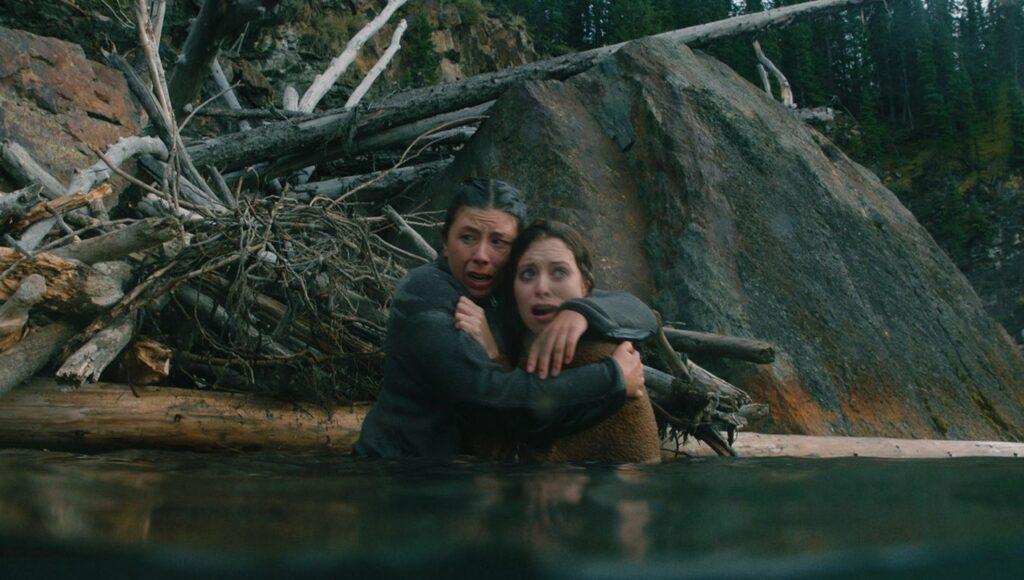 Unfortunately, the same can’t be said about the other female characters in the film. While the performances are good overall, we simply don’t get enough of Tara, Dr. Dunnley and Shaina. Backstories, relationships and traits are touched on but never explored thoroughly enough to activate and empower them as characters fully. Ultimately, this is a shame, as what we get is intriguing and compelling. Though not a large enough flaw to derail the film, it is nonetheless a little tragic.

There are, however, several other areas where DARK NATURE racks up high marks. For one, clever sound design is used to the film’s advantage to heighten the tension, telegraph trauma, and relay the group’s rising anxiety. The killer score from the Canadian musical outfit, Ghostkeeper, effectively stokes the emotional fires and nerve-wracking horror at every turn. And the creature creeping in the foliage is as inspired as it is wholly unique. Consciously avoiding tired tropes and indigenous folk tales, Brady successfully develops a monstrous creature with an original mythos of its own.

By the very, well, nature of its narrative components, DARK NATURE will immediately draw comparisons to Neil Marshall’s 2005 film, The Descent. While apt, don’t let the comparison distract or dilute expectations; DARK NATURE is a vital feature debut with a strong voice, style and story. Blending elements of survival, folk, and creature horror, Brady mixes up a tasty cinematic cocktail strongly infused with her own creative flavor. And, me? Well, I’m stashing away an extra drink ticket now because I can’t wait to sample whatever Brady creates next.