Far East Extreme: A Look at Ghosts with a Taoist Twist in “THE IMP” 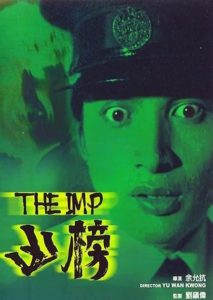 It seems like retro Hong Kong cinema gets a bad rap by the public at large here in the West. Modern classics like Infernal Affairs and Iron Monkey either get remade by Hollywood or changed to the point of being unrecognizable, while countless influential films from Shaw Bros or Golden Harvest are enjoyed ironically while imitating the oftentimes bad English dubbing. I’m personally ecstatic to find out that the farther and farther I go back into the HK horror catalogue, I keep finding really solid films that stand on their own and are definitely worth watching today. Up on the docket is 1981’s THE IMP. Rather than being “the little film that could,” this movie was actually put together by noted director Dennis Yu (maker of other HK horror films such as Flesh and the Bloody Terror and Evil Cat) with a star-studded cast of actors including Taiwanese Romance mainstay Charlie Chin and Shaw Bros regulars Hua Yueh, and Shen Chan. THE IMP exists in a happy medium between a film that was given a lot of care and a decent budget, while still having a rough-around-the-edges auteur sensibility.

It begins with our main man Keung pounding the pavement looking for jobs. He is a hapless loser looking to start married life with prickly wife Lam, but everything is presented in a light and happy way. Supernatural forces seem to point him toward a job as a night watchman in a mysterious building, and as one could guess without too much trouble, this building is absolutely haunted: lights turn on and off, creepy noises are heard, and elevators are liable to get drenched in blood! Fortunately Keung is not alone. In addition to his boss Uncle Han, we get to meet the colorful night crew: Fatty, Little Ting, and Mr. HK. Usually this group would function as a sort of sacrificial offering for the baddies; we meet them, and then they die without too much fanfare to illustrate to the real protagonist the seriousness of their situation. Fortunately, THE IMP chooses to slow things down and actually develop its cast, which is quite a good one. Han ups the foreboding right away, no doubt aided by Shen Chan’s many years of experience playing villains. Fatty positively screams “lovable sidekick,” but is well acted enough to get past the trappings of the archetype. Turns out, having buddy cop undertones in a haunted house movie is a pretty good way to lull the audience into a sense of comfort before the spooks start anew. 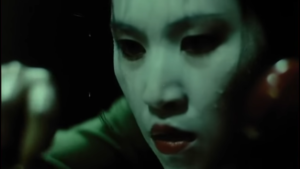 When THE IMP begins its body count, it is also more graphic than you might think for a mainstream HK movie. There are the quick spatter shots, but also slow gruesome scenes of, for example, surgery gone horribly wrong. This first act goes about establishing the principle characters and the overarching conflict admirably, and though the film can be predictable it’s also a very fun watch. Another aspect this film has in the bag is the soundtrack, which while not having any standout themes has its musical cues down pat. Whenever something spooky or shocking happens, you get the appropriate musical cue. It feels like a lot of the minimalist horror soundtracks of the 70s such as the works of John Carpenter, which I have a definite fondness for, only this time with the addition of things like erhus which are definitely spooky in a unique way. The same can’t always be said for the props and special effects, which is a very mixed bag. Some of it, like the blood and smoke, is perfectly fine. A scene near the end of a car being set on fire is also used effectively; less so when one of the characters is somehow murdered by a newspaper. We also realize the moments where the screen gets tinted is often to disguise said bad effects, like the fake ravens on the graves in the funeral scene. Fortunately, even when the film looks cheap it never cheapens the fun.

“The Imp exists in a happy medium between a film that was given a lot of care and a decent budget, while still having a rough-around-the-edges auteur sensibility.”

When the characters begin to realize that it is not the building that is haunted, but Keung himself, the film spends the entire second act figuring out the nature of this mystery. This momentary break from the haunted house stops things from getting stale, and also introduces the mysterious geomancer Yeung, played by Hua Yueh. You see, the nature of the supernatural here is very much based in Chinese mysticism rather than the Christian themes of The Exorcist or Rosemary’s Baby. Not knowing much about the esoteric mysteries of yin and yang, I was unsure to what fidelity the screenwriters stuck to, but it beats the usual pseudo-religious mumbo jumbo. It also helps that there is a sort of time limit on Keung’s curse, so there is an impetus for the crew to solve the mystery quickly. The geomancer character himself subtly subverts audience expectations; usually this type of character exists to give the protagonist hope, but dies before he can actually be useful. Another thing that interested a vanilla white dude such as myself are the settings of pre-Chinese Hong Kong. I gotta be honest, there is a definite charm to retro HK that always seems to come through on the silver screen. It is one of my biggest regrets that I’ll never be able to visit this city like it used to be, but in terms of the film it makes the whole production seem much more alive than simply using a studio lot with a buncha extras. This all leads to an exciting climax where unfortunately the mystique surrounding the spooky ghost is a bit wasted by actually showing it. I suppose closure is important, but sometimes less is more. At least the ending is suitably violent and somewhat open to interpretation. 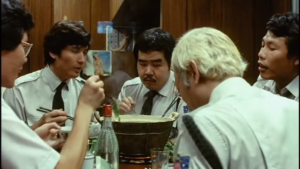 At the end of the day, THE IMP, while not exactly a classic, definitely stands out among the crowded pack of possession films. Rather than being a cheap “Chinese rip-off,” it stands well above films like the Omen and Amityville Horror in terms of camerawork, acting, and overall likeability. Unfortunately, Mr. Yu is no Polansky, nor is the soundtrack on the level of something like Tubular Bells. It’s still good, all told; a very enjoyable film.