Far East Extreme: A pleasant visit to “The House Next Door”

Welcome back to another new year and another Far East Extreme! In our obsessive quest to find delectable horror cinema in all sorts of places, we will today explore one of India’s best. I will admit going out of my comfort zone here a bit, as I have very little exposure to any Indian media aside from the Daler Mendhi videos I’d watch in college, and of course a casual veneration of the great Benny Lava. I also knew of the many Bollywood films that were just Indian versions of other films. I was eager to see some Indian horror cinema, but in my search I found many that were just horror tinged dramas or comedies. However I was pleased to find a recent horror blockbuster, 2017s “The House Next Door.”

This film is surprising in many ways: beginning with a spooky sepia-tinted intro in Chinese, the film transitions into a musical montage depicting our main protagonist, the genius doctor Krish (played by Indian superstar actor/producer Siddarth) and his new spouse, Lakshmi (actor and musician Andrea Jeremiah.) At this point, I was questioning my judgement somewhat, and considering turning the film off entirely. Objectively, however, it is a rather efficient way to get through exposition and backstory, which is too often a slog in lesser films. Within the first 5-10 minutes, the audience knows all they need to know so that the story can move forward unencumbered by the need for any sort of explanations later on. The film redeems itself shortly thereafter with Krish, a resident brain surgeon at Silent Hill Hospital (I’ll admit, this reference brought a smile to my face) operating on a patient in visceral detail. This film has plenty of brains (and some gore later on) which it handles rather cheerily and without drawing attention to it overmuch. “The House Next Door” knows its audience rather well, as you will see. 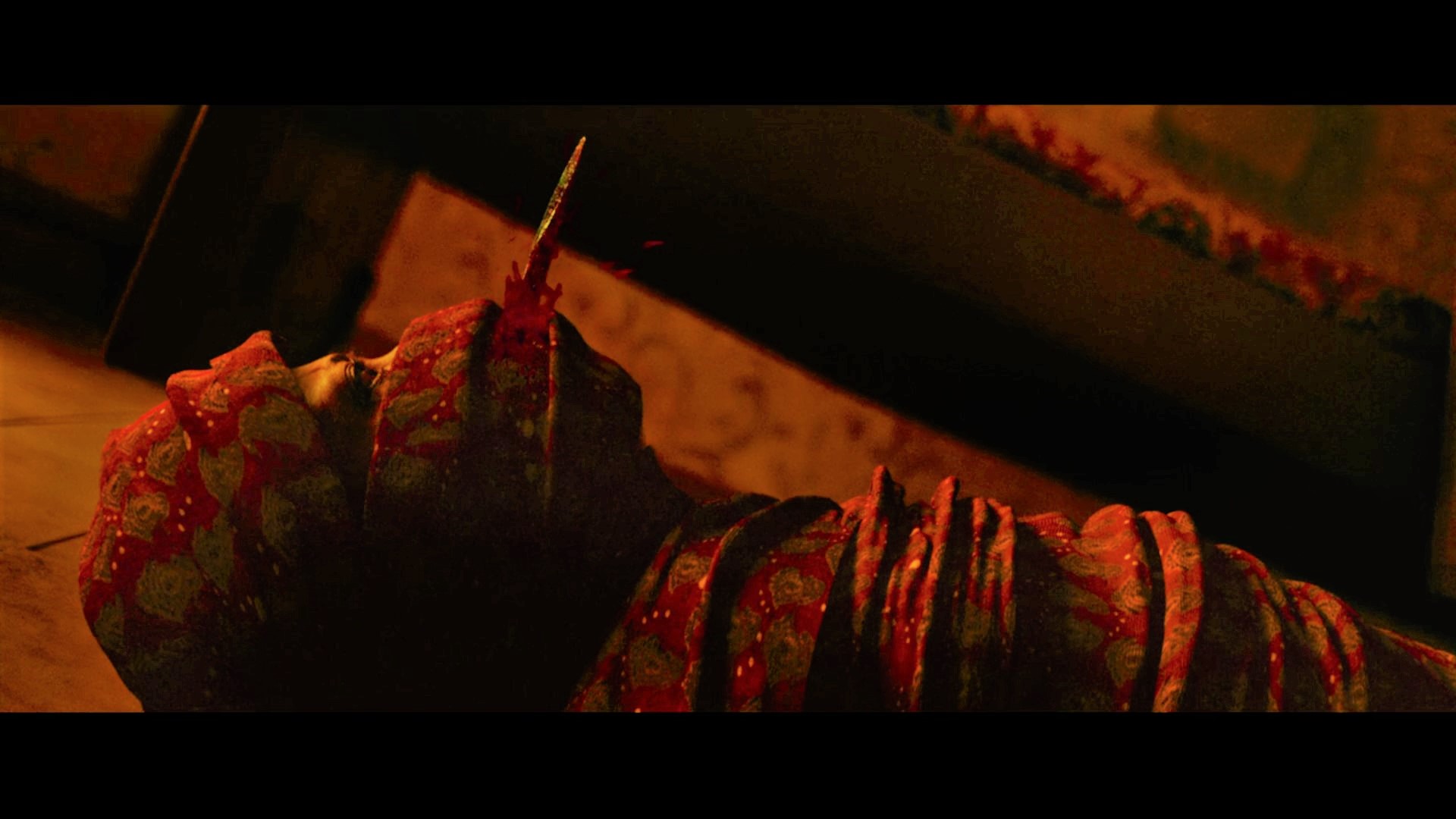 The film lets us ease into things, as Krish and Lakshmi begin their new life together by getting to know the neighbors next door. Namely, the well-to-do Paul and his two daughters. The older daughter, Jenny, takes a particular liking to Krish, especially after he rescues her from drowning. Though passed off as the strangeness of the family – who after all, keep neon red crosses around the house as well as ghostly pianos that play themselves, Jenny begins to start experiencing the paranormal. With its familiar jump scares and music swells, this film hits all the beats of conventional western blockbusters, and the actors also pull their weight, even when portraying, let’s say, invading spirits. The House Next Door is equal parts The Ring and The Exorcist, which are handled energetically, if not wholly originally. To be honest, one should not look for much undiscovered territory here, though the lush sets and beautiful Himalayan setting is enough to feast your eyes on. No, this is the Indian film equivalent of comfort food, and unabashedly so. 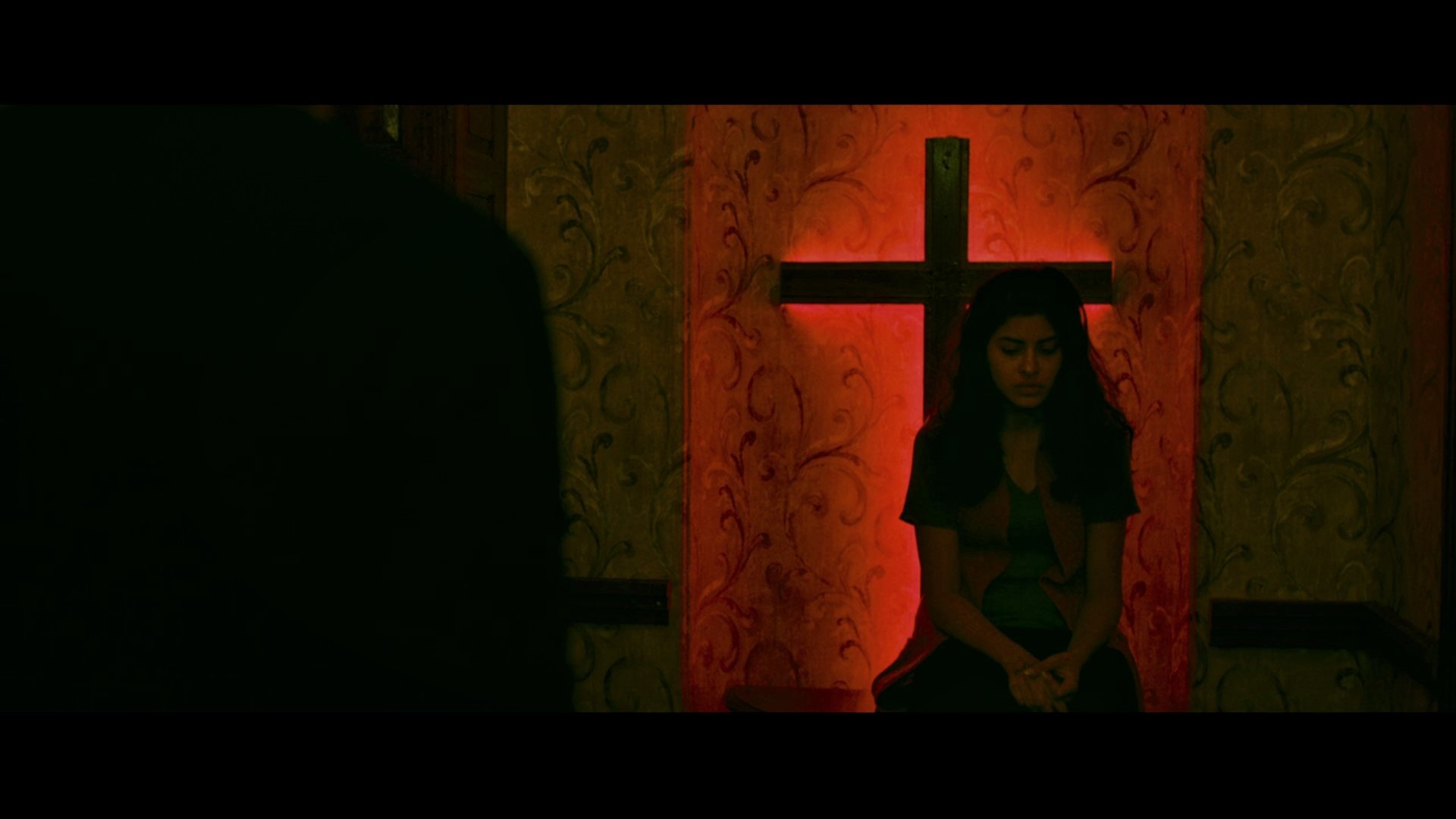 “…this is the Indian film equivalent of comfort food, and unabashedly so.”

A cursory look at Indian films reviewed by fans on the internet contain many of the same complaints: hammy acting, a focus on style over substance, and shoddy camera work (how many boom mikes and crew members reflected in mirrored surfaces can you see?) House Next Door avoids many of these pitfalls. This is a professional film through and through with a budget it’s not afraid to show off, yet it wisely avoids much in the way of cheesy CG. The brains on display won’t make anyone forget Return of the Living Dead, but it’s all done rather nicely. The acting is also convincing: Siddharth is a natural leading man, and the audience can identify with the charismatic, well-meaning Krish with little trouble. Also deserving attention is Anisha Angelina Victor as Jenny, the teenage girl with an interest in the occult who unfortunately becomes the target of some rather unpleasant ghosts.

If one could criticize the film however, it would doubtless have to do with the rather lightweight (but thankfully not overbearing) plot. Don’t get me wrong, it hits all of the familiar beats of typical Hollywood Horror, but that’s all you’re going to get: a haunted house, some loved ones in danger, a rescue attempt gone awry, and then a twist at the end. Throw in an extra unneeded subplot about child sacrifices which drags the film down, but it is redeemed by a satisfying conclusion. The main question for the viewer is: do you like horror movies? Because this movie is essentially Indian Horror: The Movie. However, like the planeteers of Captain Planet fame, this picture does have plenty of heart. One could only hope that it has been paving the way for films with a similar caliber of production values that can branch into new territory. 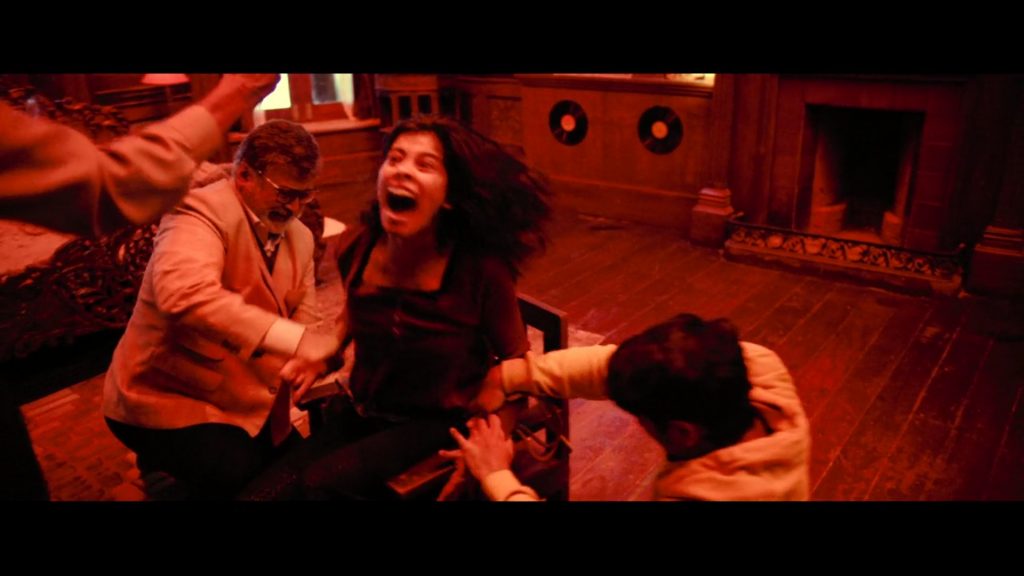 The House Next Door was released in three languages in India: this doesn’t affect the film itself, however the soundtrack in the Hindi version is in my view superior to that of the Tamil version (known as Aval) or the Telugu version (called Gruham). Where most of us are concerned however, as each edition has identical subtitles, just see whichever one happens to be available, grab some popcorn (or perhaps a roti or two), and enjoy!