Far East Extreme: America and Japan battle once again in “War of the Insects.” 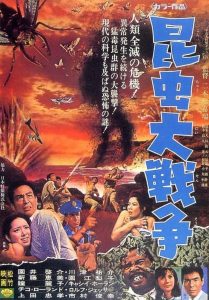 Western horror has a proud tradition of shlock. Whether it be the American classics of William Castle or the pure Italian cheesefests of Mario Bava, there are certain archetypes that while corny, are so beloved that we see echoes of these clichés in films to this day. Naturally, the Japanese were no slouches in this department; one of the most memorable in my mind being 1968’s WAR OF THE INSECTS. Released as GENOCIDE in the West, it’s a loving amalgamation of Godzilla meets the insect kingdom, chock full of terrible overdubbed English lines and hilariously weird usage of stock footage. As low rent as the whole production looks on paper, it does come with a bit of a pedigree: director Kazui Nihonmatsu worked as an assistant for none other than Akira Kurosawa, and also made the one of the more memorable films to follow in Godzilla’s wake: X from Outer Space. Whether it be a dissatisfaction with the finished product or some other reason, he decided to credit himself as “Norman Cooper,” and to the best of my knowledge later quit the industry altogether.

Though this is a fully Japanese production, we see very little of the Japanese cast at first, instead focusing on a group of American soldiers on a plane. Following the proud tradition of foreign actors in Japanese films, they are all completely terrible; every line is hilariously overacted, and seem to have been dubbed over in post-production. In a hilarious confluence of events, one particularly disturbed soldier, Charlie (who has the dubious honor of being the token black guy in the film, played by Chico Roland) has a war flashback and tries to take the plane hostage in a fit of insanity. Meanwhile the group is apparently attacked by a swarm of bees, which somehow causes a wing of the plane to explode, and drop a nuclear bomb on a nearby island! My explanation may have done the film more justice than it deserves, since what it amounts to is a guy freaking out after seeing a bee, and then cut to some stock footage of WW2.  This island, a vacation spot for Japanese and a smattering of other foreigners, becomes the primary setting for the rest of the movie as the good guys try to find the bomb and stop an international conspiracy.

The audience is then brought to an American military installation, full of all the dials, panels and beep-boops that make up the best of ’60s and ’70s sci-fi. Unlike the aforementioned giant lizard, the film has no reason, unfortunately, to use guys in rubber suits, so, aside from the cheap sets and props, the filmmakers attempt to wow the audience with blue-screened stock footage and miniatures. Where the film does stand out straight away is its nostalgic soundtrack, which will immediately bring to mind the old Universal horror classics. Every time I hear that one menacing clarinet I automatically get in the mood for some old-fashioned horror! In the case of this film, what it amounts to is a fear of bugs. Some of you who were Pokémon masters in your childhood may have stumbled upon a bug catcher or two and thought it was rather random; when in truth that archetype can be seen to this day. Japanese, especially Japanese kids, love bugs. The flip side to this is the question: What do the bugs think of us?” Put this in the context of a goofy 1960s horror film, and you know you’re in for a good time! It is also interesting to note that being from 1968, War of the Insects predated the killer bee craze by around ten years, though it could hardly be called visionary in any other sense.

Later on we meet the “stars” who received top-billing in this movie, including the films power couple George and Yukari, played by Yusuke Kawazu and Emi Shindo. Kawazu, after starring in some acclaimed films in the earlier part of the decade, was at this time transitioning into B pictures: He would later have roles of varying importance in some of the 90s Godzilla and Gamera films. Shindo, meanwhile, alternated between action flicks and the unique sexploitation scene of “Roman Porno.” Here, the two give a basically archetypal if unmemorable performance. Yukari is in all ways the damsel in distress role with the typical focus on feminine fragility from movies of the time, so we can laugh 50 years later as she flops around and brushes away non-existent tears. Anchoring the film is Keisuke Sonoi as Dr. Nagumo, who in a bit of a swerve becomes a sort of wannabe James Bond. This cheapens the horror a bit, since, like James Bond, he is never in any real danger. Now, when I say “James Bond,” I mean the Bond films of the period: those full of quaint racism and misogyny like Live and Let Die and Man with the Golden Gun, which while great action capers, don’t deserve to be taken seriously. As George is something of a wastrel and relegated mostly to attempted comic relief and Yukari is too busy getting the vapors to be of any real use, it is up to the good doctor to pretty much do everything himself, take on the role of detective and interrogate criminals while also being conveniently the only person with foreknowledge of the killer bees that are coming. Nagumo provides two roles: giving the requisite scientific mumbo jumbo while also being charming and debonair. As is necessitated by the role, the Doctor somehow figures out everything; he’s always the smartest and most capable person in the room even though he has no training as such, he’s just a biologist. The main players aside, the supporting cast is uniformly terrible, and may remind audiences of some of the bit players on early seasons of Star Trek or Doctor Who. Worst off is, as previously mentioned, poor Charlie, who is described by the film as  “a wild beast on the inside” while he flails around, eyes bulging, throwing furniture and attempting to kill people in his bug-induced mania. Fun stuff all around.

“The flip side to this is the question: “What do the bugs think of us?” Put this in the context of a goofy 1960s horror film, and you know you’re in for a good time!”

Once the film takes these characters and attempts to set events in motion, we can see how poorly constructed this film is. The film sets out to stick these disparate motley crew of characters into the action, heedless of logic or common sense, to the delight of a modern audience. The fact that things are played completely straight is also something to note; usually, goofy films that take themselves seriously are considered to be something of a failure, but WAR OF THE INSECTS is so earnest in its anti-war message that you can’t help but smile, even when the film wishes you didn’t. The dialogue is thankfully mostly reigned back: a character says “We have to go to X,” or “Let’s go and find Y!” and in the next second there they are! The editing follows suit and wastes no time establishing setting or mood: just get from point A to B. There are however, a few real gems, such as when a bikini babe Bond girl-turned mad scientist says, “I love insects because they never lie. I don’t trust human beings.”  Meanwhile, would-be secret agent Nagumo learns about the American military conspiracy, and uses his superhero powers of deduction to solve the mystery! The way he is literally shoved into scenes just beggars’ belief: the Doctor has no personality but everyone likes him, he is allowed to enter military institutions, interrogate prisoners, and examine patients with deadly diseases. The editing and continuity in this movie so bad, that bad guys literally say secrets in front of good guys without the film even acknowledging it. This is to say nothing of certain scenes when the same voice actor is dubbing multiple people who talk to each other in the same voice! But when you get down to it, the fact that everyone overacts and behaves so strangely, and the inconsistencies and behind-the-camera issues don’t matter: all that’s important is moving this story forward!

This might be as good a time as any to discuss the titular monster(s) of the tale. We’re talking about bees, right? Wrong! As with any thought-provoking epic, the real monster is man! You see, this whole movie is really just a big commentary on World War 2. In this way it’s thematically similar to Godzilla and kaiju films without giant bugs and rubber suits: In the post war world, how can any monster, ghost, or other supernatural creature match the destructive potential of man? Not that I entirely disagree with the sentiment, but the way its presented here is so childish and simplistic as to make a serious topic into a complete farce. And to be honest, we’re never really sure what the bugs have to do with anything really. And then, the big plot twist: the beautiful blond girl is…a jew! Apparently, Some Japanese writer thought he was being clever and erudite and worldly, so the nature footage of insects is switched out in favor of war footage of concentration camps! It makes you think: What depths will this film go to prove a point? Again, I do admire the fact that the filmmakers set out to make a film with a serious message of peace, and it has an endearing quality to it, but when characters utter lines like “winning a war doesn’t make you right,” you can’t help but do a spit take. The problem is that culturally, insects don’t engender much sympathy outside of Japan, and when you include the terrible dubbing in the mix, it all doesn’t translate terribly well. Token black guy Charlie always gets the worst of it, including the line “No, the insects, no!!!!” There are plenty of forced parallels between humans and bugs, including the gem “Insects have babies too. That’s why I asked you not to harm them.” At the end of the day, watching bad actors flail around while pretending that they’re covered in bugs is just kinda funny.

So if the film focused on being a monster jam without the extra stuff it probably would have been better for it, but let’s look at the positives. First of all, it’s obvious that the filmmakers had real love for the medium and the genre; we see them here in the herculean act of trying to cram every horror trope into a single work: from mad scientists to Frankenstein monsters, it’s all there! It’s as if the writer wrote down every horror trope, and tried to put all of them into one movie. The ending attempts a darker turn, but it just goes to show you can really laugh at anything. At the end of the day, we can enjoy movies like WAR OF THE INSECTS for the camp factor, and place it, if not on the level of Plan 9 or Chopping Mall, at least as good as Horrible Sexy Vampire and Troll 2.