Far East Extreme: the Beautiful, Schlock-filled Afterlife of “ANOTHER HEAVEN” 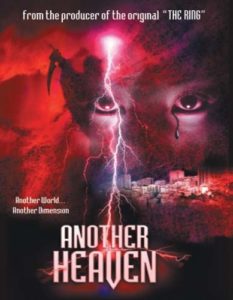 ANOTHER HEAVEN was another millennium-era J-horror flick that I had meant to watch for years, until I noticed it was on Netflix of all things. This film is the brainchild of Joji Iida, who seems to have done a bit of everything, including creating the Night Head franchise, wrote the screenplay for a made-for-TV version of The Ring (predating the popular theatrical version), directing the original Ring sequel Rassen (aka “Spiral”), and even creating a video game Moon Cradle, an adventure game that was only released in Japan exclusively for the Panasonic 3DO. ANOTHER HEAVEN was one of Iida’s final films before he transitioned to focusing on television work, such as the awe-inspiring “Iron Grandma.”

The movie stars the prolific Yosuke Eguchi (known as the star of the 2009 Goemon film, with supporting roles in Ruroni Kenshin and Bleach) as good-guy cop Manabu, who must track down a serial murderer with a gruesome MO: removing and cooking the brains of their victims. The hard-boiled buddy cop motif is just window dressing for what is actually a rather over the top horror sci-fi flick with a generous portion of comedy thrown in. 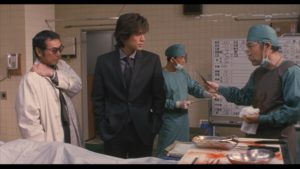 The film shows its hand immediately when we get a close up on the aforementioned gore stew, and some synchronized vomiting from the bumbling cops for good measure. This is, in a nutshell, the crux of ANOTHER HEAVEN: one minute talking about the complicated mind of a serial killer, the next whether or not aliens exist. Did you watch Se7en but wish it were goofier? This is the movie for you. Considering the subject matter, ANOTHER HEAVEN is actually masterful at not letting things get too dark despite the onscreen violence. In a way this balance is aided by the production and acting, all of which has a slightly b-tier made for tv vibe to it that will be familiar to anyone who’s a fan of Y2K era Japanese schlock. Chances are you will know whether or not you like this movie by the 15-20 minute mark. It never really rises above its contemporaries, but who dislikes more of a good thing?

Manabu is made out to be the generic pretty boy, his partner being the generic salty cynical old-timer. The real standout for me is Manabu’s sometime girlfriend Asako, played by former model Miwako Ichikawa in her film debut. Ichikawa stealing the show makes a little more sense when you consider her little sister is Mikako Ichikawa, star of among other things the coming-of-age classic Blue. Asako, who was involved in an old case, and has followed him around ever since,  acts as the wise mentor archetype in the girlfriend role, while still being childlike and basically nuts. She is a stereotypical but convincing combination of crazy and sexy. Unlike a movie like Tag, ANOTER HEAVEN is definitely not a feminist film, but maybe that’s ok too; while merely a grab bag of clichés, the film combines them in a way that is ultimately fun to watch.

“The hard-boiled buddy cop motif is just window dressing for what is actually a rather over the top horror sci-fi flick with a generous portion of comedy thrown in.”

Manabu’s rather vanilla characterization is aided immensely when playing the foil to Asako’s wackiness. This crew works together to solve the mystery of the serial killer, which as you can tell quickly takes a supernatural bent. Is it ghosts? Is it aliens? What it is, is very Japanese; I’ve never seen western horror quite explore this territory – the closest I can think of is possibly Argento mixed with X-files, by way of comparison. Like Argento, the film is made up of archetypes more than characters, and the dialogue more or less follows suit – it is both dumber and occasionally cleverer than you’d expect.

After the 30 minute mark or so there is finally a flashback to the crimes, complete with overacting and generic j-drama music; if you have ever seen shows like “Team Medical Dragon” then you’ll know what I mean (and if you haven’t, why are you reading this?). But that’s all alright, because we are gifted brains, brains, and more brains! I don’t know if I’ve ever seen this many brains in a movie WITHOUT ZOMBIES! Speaking of the music, it’s worth noting that of all the cast and crew, the individual whose star would go on to shine the brightest was actually composer Taro Iwashiro, who would go on to score the Full Metal Alchemist film, Ruroni Kenshin and the live-action Kiki’s Delivery Service, winning the Mainichi Film award for Red Cliff. I love horror soundtracks and movie music in general, but unfortunately that skill isn’t really evident here. 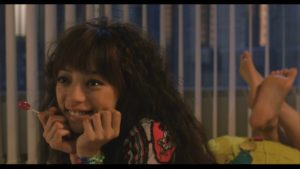 The film has its highs, don’t get me wrong; however it’s beset by a myriad of problems aside from the score. Aside from Manabu and Asako the cast have zero chemistry with one another, and that includes the villain. Here the killer has a riddle like in Se7en, but there’s just so little incentive to care because the plot and characters are so lightweight. The movie is also overlong at 2 hours 12 minutes, which gives the filmmakers the excuse to include more action chase scenes which are poorly stitched together. Because of this it is often difficult to ascertain how much time passes between scenes. There are also numerous times where the plot just stops dead in its tracks in order for someone to have one personal revelation or another, but if you’re at all like me you’ll be far past the point of caring. The finale takes on a body snatchers vibe, but without the subtext that made the former memorable.

At the end of the day, Another Heaven can’t really be taken seriously, but is a lot of fun, and also different enough to distinguish itself. It’s like a McRib instead of a regular burger, you know it’s not really good for you, but when you see one you just have to eat it. It is also unique in this J-horror boom period in that it has never been remade. It’s a weird movie overall; dumb horror isn’t usually so compelling when it slows down: ANOTHER HEAVEN is a shitshow that you just have to study. It’s just kind of crazy that a movie that ties itself into so many plot twists has to be wrapped up somehow. Definitely worth a watch: ANOTHER HEAVEN is no classic, but also much too weird to be forgotten.