Far East Extreme: Some Choice Complaints about the “NEIGHBOR NO. 13”

In our quest to find interesting Asian horror films to watch and recommend to readers, we often have to wade through a lot of rather worthless stuff: movies that aren’t really horror (those hard-boiled Korean thrillers), horror that isn’t scary (Indian horror films that become musicals) or material that isn’t one bit original or interesting (the rip-offs of Halloween, the Haunting, and Texas Chainsaw you can find the world over). The idea is that mixed in with all that is some inventive, wild, and downright disturbing stuff that is truly great. NEIGHBOR NO.13 is a bit of a rare beast: there are 2 or 3 really fantastic moments here, but the movie as a whole is a huge letdown. 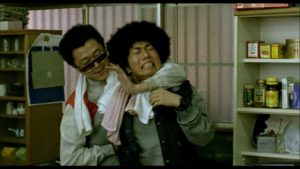 Here’s the plot: a guy named Juzo got bullied, and now wants revenge. We’ve all seen a billion flicks like this before, and even without me saying any more you will probably be able to guess a good portion of the plot. That being the case, how is a film in this milieu to stand out? The answer is simple: Turn everything up to 11. You see, not only was Juzo bullied, but a bunch of scientific chemicals were dumped onto his face, leaving him with severe burns. He now sees the world as a washed-out hellscape that reminds me a lot of Jigoku. His wounds are wet n’ juicy, and this movie is plenty gruesome from the get-go. Maybe my eventual disappointment with the movie is all just a case of high expectations, because things look good in the early going.

The surrealism of the opening scenes should clue you in right away to the fact that Juzo is not exactly a reliable narrator, and the world through his eyes doesn’t really resemble our world. Case in point: the bad guy, a bully Toru played by Hirofumi Arai, as well as his cohort, are utter caricatures that belong in some futuristic grindhouse yakuza fiction. This does make some sense – in fairness – when you consider that NEIGHBOR NO.13 is based on a manga by Santa Inoue, the same guy who wrote Tokyo Tribe.  The way the film lines up everything so conveniently in the first act confirmed to me that this is a fantasy world in the way that revenge fantasies often are. Everyone outside of the “innocent” Juzo looks like a gangster, and it isn’t enough for them to just be regular bullies, no; they have to be SUPER bullies! You have to literally be preying on people every second of every day, and have a laughing cohort of goons to say obligatory lines like, “Good one, boss! You sure showed him!” This is basically caveman shit: “he good, he bad.”

The whole time I watched this film I imagined the dialogue being boiled down to grunting noises circa Tim Allen in Home Improvement. The one caveat to all this is that we know Juzo has already snapped, and that brings a certain Dr. Jekyll and Mr. Hyde-type theme to the table. You see, when Juzo is feeling really bad, he turns into this other guy, who is of course able to fight back and get even. The whole deal sounds like fan fiction I wrote when I was 12, and it doesn’t really get any more complicated than that. There are no deeper truths, no more incisive looks into the fragile human mental state. You hurt me, so I hurt you back; end of story.

“The whole deal sounds like fan fiction I wrote when I was 12, and it doesn’t really get any more complicated than that.”

However, that’s all fine: the character archetypes are fine, the boiler-plate story is fine. What isn’t fine is the inconsistent tone of the movie. When Juzo-Hyde kicks a dude and sends him flying across a room you want to laugh, less so when he is holding a crying kid’s head underwater. This film’s main problem is that it isn’t smart enough or dumb enough, instead it occupies a weird middle ground that just makes you feel uncomfortable. Movies like Meatball Machine are fun gory messes, while NEIGHBOR NO.13 has the window dressing of a gritty and realistic film, except the final product isn’t really gritty nor realistic. The people who get off on mean-spirited escapist wish fulfillment BS like this will like this movie, however most people will immediately consider Juzo some overblown incel stereotype, and will feel nothing approaching sympathy.

Again, back to genre “classics” like Death Wish: what if you didn’t care whether or not the good guy’s wife got raped/killed? The movie’s raison d’etre disappears, and at that point it’s just a question of if the violence appeals to your own particular aesthetics. As for me, I think a lot more goes into a good film than that. The most obvious example I can think of is Oldboy, which had a definite artistic quality and respect for its audience, while here even the light-hearted comedy bits beat you over the head to an obnoxious degree. Hey, look; somebody’s peeing everywhere! Isn’t that funny?  This film has been done better so many other times: films where relatable, sympathetic characters are just pushed a little too far, sometimes completely due to accidental circumstances beyond anyone’s control, with characters who while flawed, can even in their worst moments remind us a little of ourselves. In the more extreme case of something like Last House on the Left, the bad guys are straight up criminals that are themselves outcasts. Some are over the top, either in a slapstick or a witty sort of way. NEIGHBOR NO. 13 is none of these things; it is slow, plodding, depressing, and utterly empty. I’d advise you to stay away from it, except… 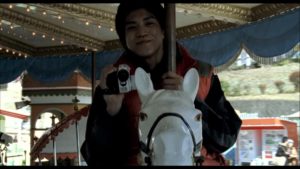 I mentioned at the beginning of this article that there are a few real standout moments that I remember fondly about this film. Let me temper my possibly extreme opinion about these kinds of movies by saying that NEIGHBOR No. 13 is by no means completely worthless. When the movie really goes all out and explores Juzo’s psyche you have a few select scenes with the two Juzo’s interacting with one another: abusing each other, playing mind games, or just dancing around letting off steam. It has a bizarre charm to it that was totally refreshing given the oppressiveness of everything else, and it just makes you wish the movie had even more of this surreal navel-gazing. Another stand-out is an unexpected switch to an animated landscape, including some impressive roto-scoped choreography. It must be said I’m a sucker for this kind of stuff. I’m probably one of the few people who will defend movies like Cool World – and to see interesting animation techniques in horror films is just a complete joy. It makes one wish that THIS were the movie instead of a neat extra bit. Even a fun cameo from horror legend Takashi Miike can’t save this thing at the end of the day. I un-ironically enjoy films like Guinea Pig, but this one just made me want to take a shower.