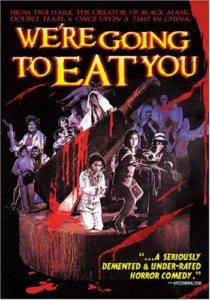 Cannibalism occupies a special place in our psyche; the mere thought of it is often so horrible that such a film really doesn’t have to do much to inspire terror and revulsion in the audience. Regardless of the language and culture, it turns out, none of us are too keen on eating people. This works in the horror movie’s favor by allowing the filmmaker to do more with less, since the movie goer is twice as eager to fill in the imaginary gaps than if it was just another zombie flick or ghost story. If you watch a movie like the original Texas Chainsaw with anything approaching a critical eye, you will realize that for much of the movie not a whole lot is going on and yet, it is commonly thought of as one of the most intense and horrifying movies in the popular consciousness. Early exploitation flicks that did up the ante like Cannibal Holocaust are simply off the scale as far as most people are concerned. And horror-comedies that deal with eating people thematically (I ask again, anyone remember Ravenous?) can be funny, but rarely ha-ha funny. We’re Going to Eat You – made the same year as Deodato’s exploitation opus – is a film that not only gets the rare balance between horror and comedy right, but does so when the setup- being stranded on an island full of cannibals – would in so many cases immediately swing the balance toward horror regardless of the quality of the jokes.

We’re Going to Eat You should be noted by fans of Hong Kong cinema as one of Tsui Hark’s earliest works. This member of Hong Kong’s new wave later directed classics like “Once Upon a Time in China”, “Zu: Warriors From Magic Mountain”, or more recent fare such as the “Detective Dee” series and 2017’s “Journey to the West: The Demons Strike Back.” There isn’t much horror in his repertoire, but this movie can be thought of as a good jumping-off point for good Chinese film in general. 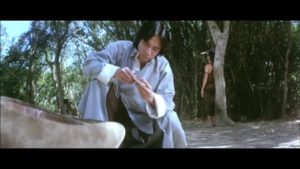 The film begins with a police officer known only as 999 going to a spooky island to catch a criminal said to be in hiding there. He appears cool, suave and capable, and almost immediately gets robbed and left for dead. What is a man to do at this point, you ask, but to fight off crazy masked cannibals with a basket of ducks! Imagine, if you will, a Jackie Chan film where the titular hero could barely defend himself. You know why? Because this is still a horror film after all is said and done, only the action scenes are directed like a martial arts film, meaning they’re much better choreographed and the outcome is less certain. There’s even a punch line at the end!

As for the antagonists, they are given a fair bit of personality and characterization, but the first thing that horror fans will think of when beholding these gibbering psychopaths is the soundtrack to Suspiria. China gets a bad rap when it comes to derivative works, but here it’s warranted, as most of the soundtrack was lifted from Goblin’s opus. I suppose one man’s copycat is another man’s greatest hits. That aside, the film is gonna give you what you want: the cannibals chopping up, disemboweling, and eating hapless innocents.  Some accolades must be given to the entire slaughter house complex on the island set, which is daunting and creepy even while goofy stuff is constantly happening around it; the film uses setting effectively, effortlessly switch gears between fighting, laughing, and killing.

“What is a man to do at this point, you ask, but to fight off crazy masked cannibals with a basket of ducks!”

As for the plot, the finer details quickly get lost in the cat and mouse game between Officer 999 and Rolex the crook. Our friendly cop plays the dumb teenager archetype to a t: simply bumbling about the village as if he doesn’t know where he is. He even finds a love interest along the way, who while attractive and in need of a big strong man to help her out, is every bit the disturbed human flesh eater as the rest of the island villagers. She’ll take your heart, but not the way you think; she likes the feel of your skin, but for different reasons. So what do these villagers do, you ask, when they aren’t abducting and eating outsiders? Have town meetings, of course! As film-goers, if you’ve ever felt concern for your fellow cannibal, thought that maybe outsiders are few and far between, and that it’s a problem for them if the token black guy or non-love interest girl doesn’t wander in the house and get killed first, maybe a few people go to bed hungry? Or if the daily flesh-haul is a little light, who gets to eat first? Turns out Tsui Hark’s film is also a lightweight anti-communist think piece behind that veneer of slapstick. Cops? Thieves? Two sides of the same coin, according to the filmmakers. While not overly philosophical, it is just interesting enough, especially in today’s political climate, that it deserves your full attention. 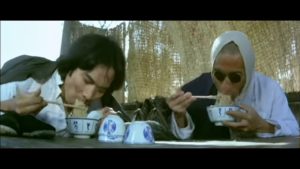 Technically the film is also first rate for the time. Despite not being the focus per se they did not slouch in the martial arts department, as the choreography is excellent – easily on par with the output of Shaw Bros or Golden Harvest, and many scenes look like they were done in single take. Even better, after a kick or chop you have the benefit of copious amounts of blood and severed limbs! Still, some sound editor felt like they needed exaggerated martial arts noises, and I sure hope he got a raise; it is the perfect mix of laughing while still wincing at the same time. The pacing of the movie is super tight, which is fortunate, since the actual plot is very lightweight, and not a lot happens besides two guys getting chased around an island. The acting is also fairly well done: the leads do their job admirably and the support characters manage to be endearing even given the shorter screen time. We are treated to scenes that actually add character development, such as a crazy cannibal lady taking care of her bro, or a cop who is afraid of being seen naked. 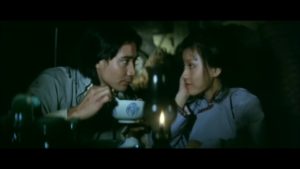 We’re Going to Eat You is not often considered one of Tsui Hark’s finer works, but I will absolutely recommend you see it regardless. Ever wonder what the Leatherface family actually talked about at the dinner table? This is the film for you! It takes a special film to show that you can eat the rich while also throwing in zingers like “I’ll feed you my farts!” and a swift kick to the groin for good measure.