KNOCKING is not an easy film to define. Defiant of genre labels, the debut feature of award-winning Swedish short filmmaker and documentarian Frida Kempff might best be described as a mystery, albeit one with uniquely disturbing and horrific undertones. Evocative of the work of both Alfred Hitchcock and David Lynch with occasional shades of Roman Polanski’s Repulsion, KNOCKING, written by Emma Broström from author Johan Theorin’s 2016 novel Knockningar, is an unnerving slowburn that will have audiences doubting their own senses and sanity by the film’s conclusion.

Cecilia Milocco stars as Molly, a woman recently released from a psychiatric care facility after a traumatic incident that left her emotionally shattered. Picking up the pieces of her life, she moves into a new apartment as part of her recovery. Soon, however, an ominous knocking which seems to emanate from the room of an upstairs resident breaks Molly’s solitude sending her into an obsessive and, at times, hallucinatory search for answers.

Frida and Cecilia, thanks for joining us today all the way from Sweden. First of all, Frida, how did KNOCKING come about and why did you pick this story for your first feature length film?

FK: I come from documentaries, but, for a long time, I was very frustrated because I couldn’t really tell the story that I wanted to tell. So people said to me, “You should really try fiction.” And I did some short dramas. Then, by accident, I came across this novel, and I thought that it was really interesting to make a story that matters into a genre movie with so many elements and especially with the theme of not being trusted as a woman and what happens to you because of that.

How has your previous work in documentaries affected your approach to narrative filmmaking?

FK: Hmm, I wonder–because [the two forms] are so different to me. I don’t work with nonactors. I like very much to set up things. My experience with documentaries is that I film a lot. . . So I think I’m kind of relaxed while I’m filming because I’ve done that so much.

Otherwise, I think, maybe in terms of research. I like to give the actors a lot of reality stuff to work with. Cecilia actually went to a real psychiatric ward to feel what it’s like.

Cecilia, tell me about your character, Molly. How did you approach playing her?

How did you maintain that level of emotional intensity that Molly requires and how do you get out of that headspace when filming stops?

Having worked together on other projects before KNOCKING, tell me about your professional relationship. Obviously,  KNOCKING is a very intimate and claustrophobic film. Is that familiarity an asset under those circumstances?

FK: We did a short film together called Dear Kid. . . When I read the novel Knockningar, I just knew Cecilia had to do it because she’s such a great actress and you can just have the camera on her face and feel her inner journey. I don’t know how she does it.

[The claustrophobic themes of KNOCKING] are something I always come back to because that’s my biggest fear–being locked in somewhere alone. Claustrophobia is an element I use a lot in my films.

What is KNOCKING saying about how we treat the mentally ill and the marginalized? More broadly are you consciously making a point about how patriarchal society often dismisses the experience of women?

CM: For me, the story is really about grief and being unstable in the face of grief. We’ve all experienced that. It’s very easy to doubt a person’s experience if they’re considered unwell or they’re not “normal.” In a way, I think it says more about how we see normality. Molly is a woman. Women experience this daily. This distrust and doubt. Tell him about that, Frida!

FK: It’s so easy to stand out as a woman. That’s why it’s so interesting with Molly. She’s a complex woman. Jesus, we’re all complex women, but we rarely see that on the screen. It’s starting to get better.

While reading the novel, I thought a lot about the #metoo movement–and thank God for that. Finally, the voices of women are being raised. I thought about that a lot. I don’t know how it is to be a Black person. A man doesn’t know what it’s like to be a woman. [With KNOCKING I asked], “How can I get them to see the things that a woman experiences?” Maybe some men will see KNOCKING and think, “Oh, that’s how it is. Jesus!” and learn something. 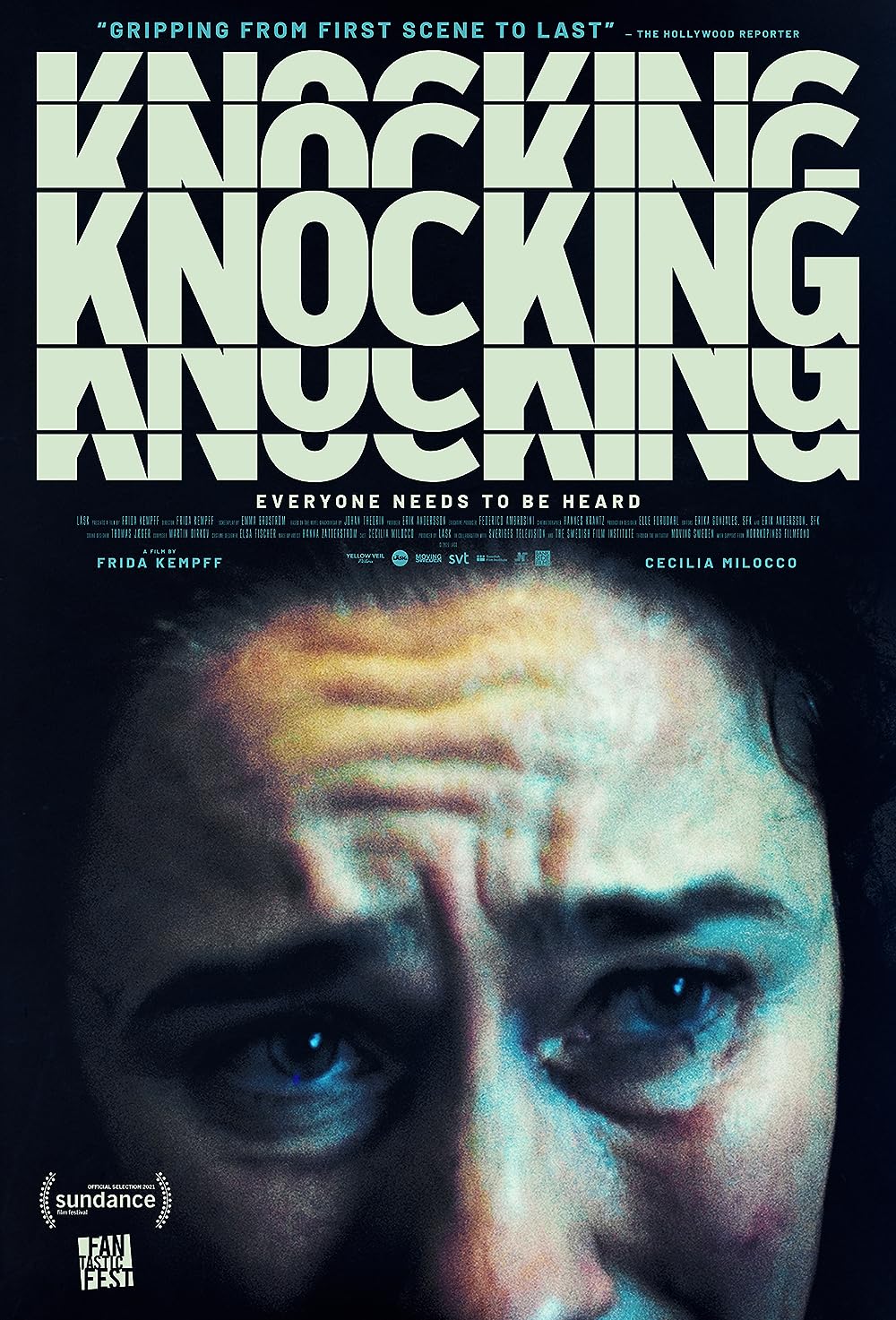 In the film, we see a brief clip of the Ingmar Bergman classic Persona. How does that film and its themes of duality inform KNOCKING?

FK: I think a lot about the viewer when I’m making films. . . I like to play around with the audience, so I like to plant things. I don’t want to say too much about Persona, but by showing [the clip] from Persona, I’m saying maybe you can’t rely on everything you’re going to see in the film. What is real and what is not? That was my intention in showing that clip.

Obviously, here at Rue Morgue we focus on the horror genre. Would you describe KNOCKING as a horror film and are you comfortable with that label?

FK: Since the film’s premiere at Sundance, people have said, “What is KNOCKING? What is it? Put a label on it!” To be honest, I don’t know. It’s an emotional journey in a woman’s body and mind. That’s how I see it. I didn’t know that I was doing a genre film because I was so involved in Molly’s mind. I think many women experience all genres during their lives. I think KNOCKING is a mix. I think it’s a drama. Maybe not a thriller, but a drama/psychological horror film. You’re trapped inside your head. It’s difficult to put a label on it.

CM: I saw it before Sundance for the first time. It’s strange and fun how a movie takes a journey to places you don’t expect. It’s been to a lot of horror genre festivals. It can be taken as a horror movie, but it can be taken in a lot of other ways, too. I think it’s other people who have decided what KNOCKING is.

FK: I agree with you. I think with a more open mind, it’s more of a drama, but once you make the sound a little intense, it becomes a genre movie. I think it should have a wider range in a way, but it helps people to know what they’re looking at maybe. . .

CM: I think it’s fun because it’s a genre movie with a story that’s not horror but becomes horror.

Do you enjoy the horror genre?

FK: I do, actually! I grew up in a very small village. It was just a crossroad with a gas station and church and a school. All we could do was rent movies at the gas station. I watched a lot of slasher movies. That was my experience from that, but, growing up, I realized a lot of Hitchcock and a lot of David Lynch’s films are really genre movies in a good way.

What are you working on next?

CM: Right now, I’m on stage. So I’m in the theater here in Gothenburg where I live.

Cecilia, you’re in Dracula? You must have something to say about horror!

CM: [Laughs] It’s so strange! I’m in a horror movie and now I’m in Dracula on stage. It’s a coincidence. I love doing things that are interesting. This Dracula thing is super-horror, so you can play it in ways that you can’t do other things. I like to try out different things as an actor.

Which part are you playing?

CM: I’m doing a part that’s usually played by a man. It’s the man who is in contact with Dracula all the time, Renfield.

Amazing! I’d love to see this!

Frida, what film projects do you have lined up?

FK: Actually I have something completely different coming up. It’s a feminist period piece set a week before the Second World War starts. But I will use a lot of the elements I learned in KNOCKING. I’m really going to push the drama in this one with some elements of horror–psychological things. We’ll see!

What do you hope audiences, especially North American audiences, take away from KNOCKING?

FK: I think the American audience during the pandemic had it worse than we in Sweden because we didn’t have so many restrictions. They were more isolated, so maybe they can relate a bit more to KNOCKING and its situations. Go and see your neighbors. See how they’re doing. Bring them a cup of coffee and show them some empathy and humanity.

CM: I think [audiences] will relate to the movie in different ways. I had a lot of fun hearing what people experience when they look at this film. It’s often related to something personal when it gets into you. That’s fun.

KNOCKING from Yellow Veil Pictures is now showing in select theaters. Look for it on digital and VOD beginning October 19th.