Of primary interest to horror fans are Manfredini’s Friday soundtracks. Completists will welcome this influx of digitally mastered slasher music, despite some repetition of cues that form the soundtrack to Part 3. Musically, the Friday films are often defined by the trademark Jason motif, the oft-quoted “Ki-Ki-Ki, Ma-Ma-Ma,” derived from a line in the first film, “Kill Her, Mommy.” And while this aural snippet is a continual reminder of Jason Voorhees’ presence, Manfredini’s scores have a lot more going for them than a simple hook. You can hear the influence of horror hits of the 1970s percolating through the music – from Bernard Herrmannesque string stabs and glissandos, to John Williams’ Jaws and some of the exciting atonalities of Close Encounters of the Third Kind. Meanwhile, on tracks like “Jason and Paul Meet” from Part 2, there’s a wink to modernist composer Leonard Rosenman (animated Lord Of The Rings). In particular, Manfredini loves to play with string textures and tempos, alternating bass motifs with high-register string stabs and moments of dissonance to emulate the stalking and killing sequences. Another standout is Part 3’s disco/funk theme, composed by Michael Zager, which plunks along with a groovy bass line and enough old-school synth textures to keep retro fans happy.

Separated from their visual sources, the scores are at times a bit piecemeal, and when presented in their full release here, the repetition and overall impact of Jason’s theme diminishes its effectiveness, particularly in the third installment, a fact that even Manfredini acknowledges in an interview in the extensive liner notes. 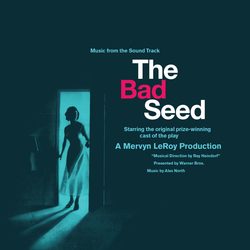 Although not outright horror, Alex North’s score for The Bad Seed, based on the popular stage play, is still of interest for aficionados of how to score a film about a murderer – in this case, a young child.

North was no stranger to scoring adaptations of successful plays (A Streetcar Named Desire, Death of a Salesman), and was part of a movement of composers who pushed ahead from the Classic-era Romanticism of golden age stalwarts like Max Steiner and Erich Wolfgang Korngold, infusing their scores with influences from both jazz and more modernist 20th Century composition techniques.

A gifted composer, North creates some lovely melodies here, and the score feels like a well-rounded whole, with standout cuts like the choral vocals on ‘”My Baby Sleep Well.” In playing up to both the mother’s love for her daughter, and her increasing horror at what her kid is capable of, the score alternates between moments of tonality and dissonance. The only drawback is an unavoidable one, as the CD does reveal some hissy limitations of the 60 year old source material, but with music this good, it’s a minor gripe.

Looking at them as a pair of soundtracks about murderers, it’s fascinating to see how significantly this genre changed musically in 30 years – North’s music both looks back to early film scores, while looking ahead to where atonal music would head with composers like Krzystof Penderecki, who would in turn influence Manfredini and the horror sound of the ’70s and ’80s. The Friday scores, with their increasing use of synthesizers, helped pave the way for a new generation of horror soundtracks that’s fueling the popularity of synthwave and darkwave.

Limited to 2500 copies, both CDs are immaculately packaged, with illustrated and informative liner note booklets. Film score buffs will be interested in both, although traditional horror-hounds will get most playback from Manfredini’s aural assaults.