Get Dusty In “Ghost Town”

Western Horror is a genre I’ve always been captivated by. Films such as Near Dark, John Carpenter’s Vampires, From Dusk Till Dawn, Tremors, Dust Devil and the hidden gem Sundown, have an allure that have consistently aroused my being. There’s something about that dusty desert atmosphere that is visually appealing, which is why I have chosen  the 1988 film GHOST TOWN for this month’s Rewind Zone.

Written by David Schmoeller (Puppet Master, Tourist Trap) who was originally attached to direct, GHOST TOWN follows protagonist Sheriff Langley who searches for a missing girl in a spooky abandoned western ghost town in Arizona. Richard McCarthy (as Richard Governor) ended up directing GHOST TOWN, replacing David Schmoeller and is one of the last films to be produced by Charles Band’s Empire Pictures before going bankrupt. 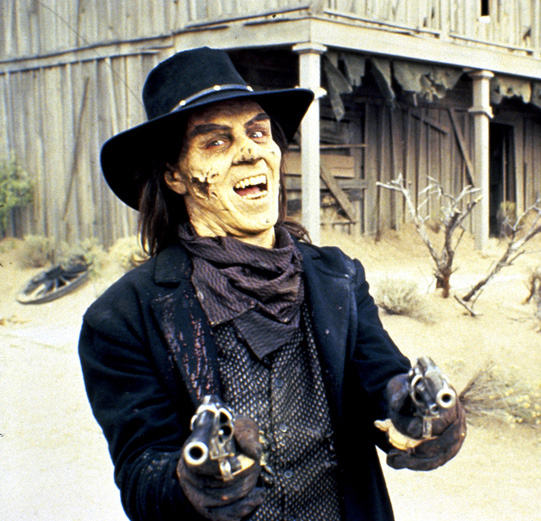 GHOST TOWN opens on Kate (Catherine Hickland) driving on desolate road in the desert when a broken electrical pole obstructing her path forces her to take a detour. Sounds of a galloping horse chase Kate causing her to pull over to confront said rider. But when she stops her car, no one is there. Suddenly, a brisk sandstorm appears and swiftly takes her away, leaving her car in ruins on the road behind for local police to investigate.

Gun-toting stud sheriff Langley is played by Franc Luz who many might recognize from another Rewind Zone covered film The Nest. I know him as Oden from Star Trek: The Next Generation where he gets it on with Dr. Crusher. Langley is practicing his shooting while listening to heavy metal when he gets called to the site where Kate’s car is found. Upon his arrival, Langley sees the ghost horse tracks and begins to follow them in his police truck however, the ghost rider finds him first. Once the rider begins shooting at Langley he quickly grabs his shotgun to defend himself, then the rider is gone, destroying his truck leaving it in the same condition as Kate’s car. Now he’s fucked!

Bewildered but undismayed, Langley continues to follow the horse tracks on foot, determined to find the whereabouts of both Kate and the ghost rider. He commits and shoots rattlesnakes in the process when he stumbles on an ancient tombstone. I enjoy that we see a decrepit talking corpse in the first 15 minutes, bravo! The corpse whispers a warning and Langley finds an old sheriff’s badge on the body before it withers away back into dusty death.

The sun begins to go down as Langley reaches the ghost town and he enters a building to evade the fast approaching thunderstorm. Inside, he sits by a candle to rest with his shotgun cradled on his lap and while he sleeps, voices emerge from the darkness to gaze at their new visitor. The next morning, he wanders into the sheriff’s office where many old crusty bodies rot away, then sees a man in a black coat that disappears right before his eyes. Afterwards he shows up again on a seemingly unoccupied porch and oh, it’s Bruce Glover! Hello Bruce Glover! The Dealer is blind but mystical, a talent Bruce portrays well in many of his roles. Did I mention I love Bruce Glover? 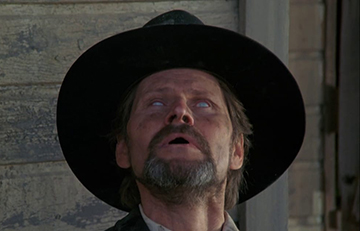 Langley continues his search for Kate as he enters the saloon. Once he puts on the old badge he stole from the corpse, a scene akin to The Shining takes place where patrons and a bartender appear out of nowhere to offer help and whiskey. The town’s folk are aware of his presence and just keep fucking with him by appearing and disappearing. There’s a lot of that in GHOST TOWN. Quickly, a confrontation occurs causing Langley to get shot, which is when we meet Etta (Laura Schaefer) who takes care of his wound. I thanked her for taking his shirt off.

Meanwhile, the other deputies are searching for Langley and are distressed when they find his truck. Kate keeps trying to escape but the ghost rider, whose name is Devlin, forbids her. At first, we only see his eyes, as he wears a mask that covers his mouth and nose. Once he takes it off, Devlin’s face is grotesque and partially decomposed. There is a flashback scene where we see more of Jimmie Skaggs’ true face. Despite that, I adore that no matter how rotten his face is, his hair is always perfectly kempt. 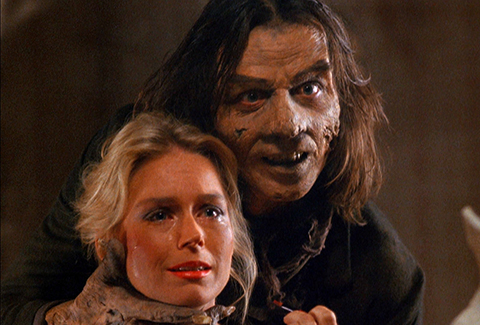 Next, the showdown scene is spectacular. I’m no Eastwood aficionado (although recently watching Dirty Harry gave me a newfound respect for him) but we get some rambunctious western themes with some added Charles Band bloody gore. The Jesus windmill is a pretty great touch if I may say so myself! With an unlikely escape in sight, Langley and Kate team up to fight against the ghosts. They form both allies and enemies of the town but the fact remains, when you are in GHOST TOWN, there’s nowhere to hide, nowhere to run and what remains in the latter half of the film is a duel to the death, or shall I say deader death. 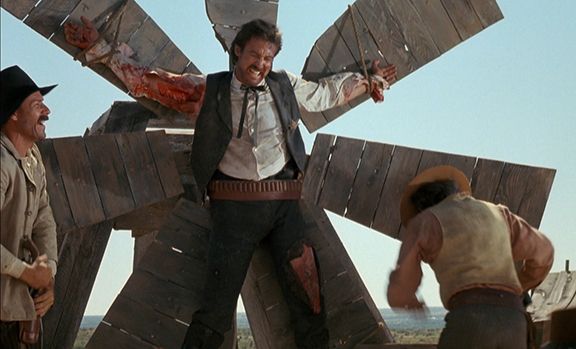 I would love to visit a real ghost town one day. If it was seemingly uninhabited and turned out to have actual ghosts, I’d be even more pleased. GHOST TOWN is a fun underrated film that barely gets talked about but that’s what I’m here for. If you’re interested in watching a plethora of disappearing acts, drunk ghosts, death by fire, death by spear, death by nails, snakes, scorpions, crows, and skulls then add GHOST TOWN to your watch list! My only question is, where do ghosts buy their whiskey?