Grab your boomsticks and shout “hail to the chin,” because Sam Raimi’s debut horror classic is returning to the big screen next month courtesy of Grindhouse Releasing! This special engagement presents the film in a new 4K transfer with a steller reworked soundtrack!

This special edition of EVIL DEAD presents the horror classic for the first time with a reimagined score by original composer Joseph LoDuca and a thrilling new 5.1 surround mix created by Marti Humphrey and Jussi Tegelman, the award-winning sound crew behind DRAG ME TO HELL and ASH VS. EVIL DEAD.

Star BRUCE CAMPBELL explains, “Mixing the sound for EVIL DEAD in the early 80’s, we were forced to shove everything into one monaural box. As a result, Joe LoDuca’s great score had to compete unfairly with Kandarian Demons, gore sound effects and lots of screaming. With this new release, Joe can finally have his dynamic composition mixed, balanced and featured properly – for perhaps the first time ever!”

Grindhouse Releasing owner Bob Murawski worked with Raimi to restore EVIL DEAD from the original 16mm camera negatives, and brought the stunning 4K transfer together with LoDuca’s new soundtrack. Murawski is an Oscar-winning film editor whose work with Sam Raimi includes DARKMAN, ARMY OF DARKNESS, THE GIFT, SPIDER MAN 1, 2, & 3, DRAG ME TO HELL, and ASH VS. EVIL DEAD.

“With this fantastic new score, Joe LoDuca proves that he’s the Bartok of blood, the Shostakovich of shock, the Mahler of the macabre.” Murawski said. ”The new music, new sound mix and new 4K restoration have elevated EVIL DEAD from the scary to the sublime.”

The new theatrical EVIL DEAD experience will premiere September 14 at the Alamo Drafthouse in Austin as part of MondoCon. This will be the first time EVIL DEAD is shown with the new score, which Mondo released on vinyl to great acclaim last year. “What we have here is one of the BEST horror films ever made with a brand new soundtrack that is more dynamic, more terrifying and more in line with Joe and Sam’s original vision of how the movie was meant to sound,” writes Mondo record label manager Spencer Hickman. “We are thrilled to be bringing you the world premiere of this brand new Evil Dead experience This is going to knock you sideways!” 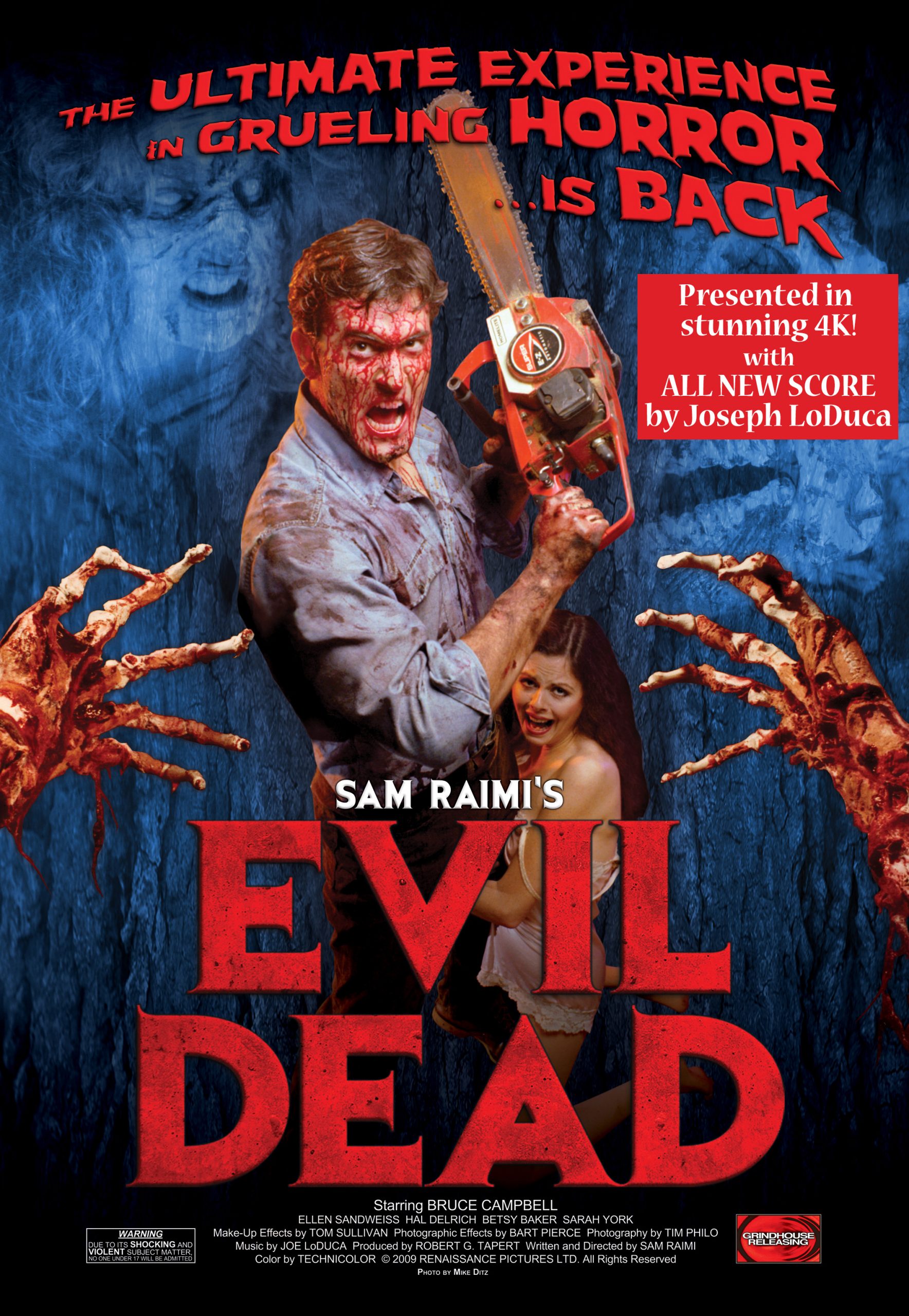 “EVIL DEAD was my first film commission. As fate would have it, this is the movie that has the most enduring impact on generations of fans. Every few years I get a request to release the score.

The EVIL DEAD trilogy launched my career composing for films and television. I still get asked to write for horror/thrillers. I love doing it, because the genre has no rules when it comes to music, save the objective of building tension and sustaining dread. Today’s audience is more savvy, so I have to constantly re-examine what is scary. Keeps me on my toes. Producers always want the popcorn to fly, and I am often afforded large orchestras to insure that happens. Yet I never seem to be able to sell the idea that intimacy conjures a bubbling cauldron of fear just as potent. With limited resources, I scored EVIL DEAD for a string quintet augmented by piano, hand percussion, a synthesizer and a bit of guitar–anything I could get my hands on.

So when I was last approached to reissue the score, I asked myself this question: Knowing what I now know, how would I write for that ensemble today? I am happy that I did. So sit back in a darkened room and listen to the soundtrack to what Stephen King once called “a black rainbow of horror”. Welcome to my nightmare: reimagined.”

Following the world premiere in Austin, the special presentation will travel to BeyondFest in Los Angeles and select theaters nationwide this fall.

Joe LoDuca will perform selections from his score live with his ensemble at MondoCon and BeyondFest events.