Independent horror filmmaker Jeff Dunn got in touch to give RUE MORGUE the first look at the trailer for his over-the-top new movie DECAPITARIUM, along with some words on the production.

Dunn, who previously helmed ZOMBIE CULT MASSACRE, scripted DECAPITARIUM with Travis Dunn, Mike Spivey and PJ Hrusjack. Sam J. Jones of FLASH GORDON stars along with Katusha Robert, Alex West, Christine Nguyen, Evan George Vourazeris, Travis Dunn and Ruby Lee Dove. The synopsis: “DECAPITARIUM takes place in the near future, at a rural college where Dr. Wilkinson [West] inadvertently decapitates his wife [Dove] in a laboratory accident. The doctor is able to save her head, but sets a series of events in motion that will ultimately transform her into a monster, harvesting brains in an unquenchable thirst for greater intelligence. Samantha [Robert] is a young college student trying to find her way through life after the death of her mother when she is hurled into an abyss of suspicion and terror. She finds herself accused of murder and pursued by her father, Deputy Amontillado [Travis Dunn]. Only she knows the nature of the threat facing the world. Even as she runs for her life, the authorities hunt her down. Trapped between hostile forces, she must turn to her millennial friends to face down an army of cyborgs.”

“DECAPITARIUM is loosely based on ideas of transhumanism, as espoused by contemporary thinkers such as Ray Kurzweil and authors of popular science fiction,” Jeff Dunn tells RUE MORGUE. “We take a dark-humored perspective, envisioning a more dysfunctional and dangerous reality. I really wanted to show the exponential capacity for human civilization to convert us into hamburger, so there are some good laughs. In the end, it’s not our obsolescence or the superiority of artificial intelligence that does us in, but a special brand of artificial stupidity that exists in the interaction between the two. The agenda of the toaster itself may be rather benign, but when that agenda is under the control of emotional humans, strange things can happen.”

In the midst of the bizarre events, he continues, “Sam Jones brought a lot of good energy and professionalism to the project. He’s the archetypal comeback kid. As Dean Usher, he adds a human touch to the demise of society. He shows, like the samurai, that we can all be blindsided by technology. Ruby Lee Dove plays her part with a great coldness, and she and Alex West have fantastic chemistry.”

Dunn and co. shot DECAPITARIUM in Texas, using cast and crew from both the Lone Star State and California. “Somehow, we got along and managed to create a spirit of camaraderie on the set,” Dunn relates, “all pulling toward the common goal of storytelling. With the success of this film, we really want to reinvigorate the Texas horror scene. There is a great legacy here, but the marketplace is changing faster than ever. We need to support good crews and a base of craftspeople in order to have a sustainable business model. We want to make it easier for some of these unique stories to get produced in the future and find a home in distribution.” 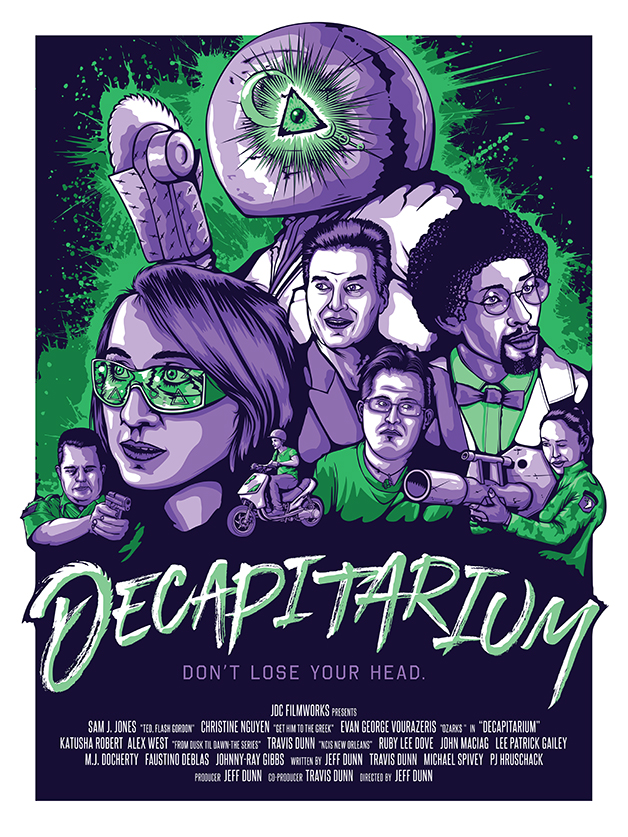