You know what I love? Space. You know what else I love? Stuart Gordon. Generally associated with the horror genre by virtue of creating masterpieces such as Re-Animator and From Beyond, I decided to write about one of Stuart’s science fiction films and one of my “feel good” movies: SPACE TRUCKERS. We’re leaping forward a few years on The Rewind Zone this month and jumping to the futuristic year of 1996. So, join me on this cosmic adventure won’t you?

Beginning on Neptune’s largest moon Triton, militant space soldiers are anticipating the arrival of cyborg warriors with guns loaded when suddenly, command posts are attacked. The cybernetic beings burn a hole through a metal gate and start decimating everyone’s limbs with their lasers but scientist Nabel, (played by Charles Dance of Game of Thrones, though I know him more from The Golden Child and Last Action Hero), has the power to stop it with a remote. Deactivating the murderous cyborgs reveals Nabel’s contribution to their creation for corporate commander Saggs whose ultimate plan is to take over earth with these 5000 “particle weapons.” It turns out that Nabel’s request for a promotion within the corporation was denied, and Saggs seizes the remote from Nabel – using it to reactivate the cyborgs and kill Nabel. 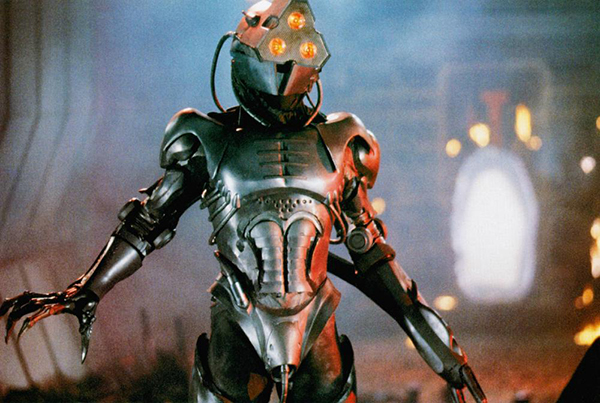 In another space-y location where plastic pack rings still exist, we are graced with the introduction of John Canyon (played by cinematic actor/artist Dennis Hopper) as he squeezes mustard into zero gravity for his hot dog. John is a space trucker and his job entails flying cargo in his ship to be delivered to different space stations. His current cargo is a bunch of square space pigs. His ship gives me Chris Foss vibes; he did the concept art for Jodorowsky’s Dune and they both contain fluorescent yellow and red hues. Actually, the costume designs in Space Truckers intensely reflects the late ’90s/early 2000s Cybergoth/Cyberpunk aesthetic with fluorescent neon, fishnets, thick bracelets, goggles, and shiny shirts. I wouldn’t be surprised if Tripp NYC provided the wardrobe.

John docks at the space station only to be welcomed by a very pissed-off George Wendt aka Keller who is upset about money but John doesn’t give a darn and he punches Keller’s henchman, sending him flying. Dennis Hopper rules. At this space truck stop, you can get a bite to eat, drink a beer and enjoy the comradery of your fellow space truckers on a circular platform that’s very reminiscent of 2001: A Space Odyssey. John heads to the bar where he gleefully reunites with the server, his old friend Cindy (the absolutely stunning Debi Mazar). I’ve been watching her in movies since I was a teenager but the one that always stuck with me was Gregg Araki’s Nowhere. John is constantly proposing to Cindy and this time, she agrees on the condition that he take her to earth with him so she can re-join her mother.

Now, I shall speak to you on a more personal level. Stephen Dorff enters the scene, shhh. It goes without saying how much I love The Gate but I have been following Stephen Dorff’s career as a fan since I can first remember having sexual fantasies. I can tell you details of his appearances in Married with Children or Roseanne, how many times he’s worn a varsity jacket on screen, how I couldn’t hate him even as a cheating scumbag in Aerosmith’s video for ‘Cryin’ but then Blade came out and it was game over for my vulva. Stephen plays Mike Pucci who just graduated from space trucker school and is looking for work. Keller informs Mike that he has a job for him which is the space pig load, and, while Mike acknowledges that it belongs to John, he reluctantly agrees to take the job as Keller’s goons detach the load from the dock. John runs into his other space trucker friends, one of them being Stuart’s wife Carolyn, when he notices that someone is trying to steal his load. Another fight ensues, someone accidentally blows a hole through a window, and the air gets sucked out taking George Wendt with it, ASS FIRST! This event causes an alliance between John, Cindy, and Mike and they request a new assignment, ending up with a cargo of sex dolls. Oh Stuart, how I love thee.

The trio’s adventure begins and they fly into the “Scum Zone,” a region of space controlled by pirates, kind of like the Borg’s home in the Delta Quadrant. Their ship is struck by a black rock causing damage to their air conditioning so temperatures start to rise quickly, but amen for that because due to this calamity, Stephen Dorff is shirtless for a large portion of the movie. A pirate ship full of what’s known as “Jackers” (because they jack loads) picks them up. The Jackers are led by Vernon Wells and they seize their weapons and apprehend the trio. Upon entering their ship, we reconvene with the newly reformed Nabel, whose new name is Macanudo. He has made upgrades to his body via additional cyber implants and a brand new SS-esque outfit complete with hat! He’s like a cyborg version of the Nazi zombies in Shock Waves but, of course, in space.

Macanudo takes a liking to Cindy and asks her to be his concubine. Although Cindy is not amused, she agrees to entertain him in his bedroom lest he should cut off Mike’s dick with an electric handsaw. Macanudo gets naked to reveal his many bionic upgrades to Cindy and this is definitely another “I love Stuart Gordon” moment because he even upgraded his penis which is operated with a pull cord like a lawnmower (I’m laughing while typing this). As he attempts to poke her with his cyborg dick, she fights back, steals his Nazi outfit, and escapes to help her buddies. Go Cindy! Their attempted escape from the ship is filled with action while they evade an army of karate fighting cyborg warriors who possess a very Xenomorph-like walk with creepy tentacle cables and switchblade knife arms.

So if you’re looking for a fun 90s sci-fi adventure, give SPACE TRUCKERS a watch. Not only does it have a stellar starring cast, but the film also includes a cameo from Barbara Crampton nailing a Queens accent and a very quick cameo by Patrick from Degrassi High (that’s for my Canadian buds who I know will recognize him immediately). Plus it’s just fucking cool that Hajime Sorayama designed the cyborg warriors and that there’s a correlation between SPACE TRUCKERS and Deep Purple as former Ian Gillan Band member Colin Towns composed the soundtrack. Crank up the “Space Truckin'” while you get your SPACE TRUCKERS on!