A Monaco-based artist and Horror junkie, Patrick Massobrio’s “Tape Heads” are quirky and nostalgic pieces that breathe new life into the VHS waste of the bygone video-store era. Armed with well-honed practical effects skills, Massobrio’s seeks to remind the viewer of the warm, comforting hum of spooling magnetic tape with his cleverly stylized renditions of everyone’s favorite Horror icons. Rue Morgue caught up with the busy artist to discuss the book he’s producing, what it’s like working alongside the love of his life, and his adoration for a certain Georges Franju classic!

What’s your artistic background?
As a child, I was deeply fascinated by Horror and even dreamed of pursuing a career as a practical effects artist. Growing up in France, I quickly learned that, at that time, programs of that type were scarce and CGI was rapidly taking over the world of effects.

Undaunted, I entered ArtFX, a school that was only in its second year of existence at the time, but has since grown pretty big. They offered a short, “old-school” practical effects course, but the main focus was CGI. Still, it was better than nothing! Luckily, everything changed once I met Michel Soubeyrand, one of the best practical-effects artists in France, and our sculpting teacher. We were fast friends and when he realized that my interests lay more in foam latex puppets than software, he graciously offered up his spare time to help hone my skills and introduce me to other professionals in the field.

During my time at ArtFX, I met my would-be wife, Nan. She was a fellow student who shared the same love for practical effects and everything Horror, so we started teaming up on various student projects. We spent countless nights in the school’s workshop practicing sculpting, molding, and casting with everything from resin, to latex, and silicone. At the end of our first year, we were required to make two short films. Nan and I used ours to really go all out on the gore and weirdness! We soon started to get a few jobs here and there thanks to Michel, and after our second year, we both decided to leave school and start our careers as freelance Practical Effects Artists! That was such an exciting time, and we did it for a few years before gradually focusing more and more on our own artistic pursuits. 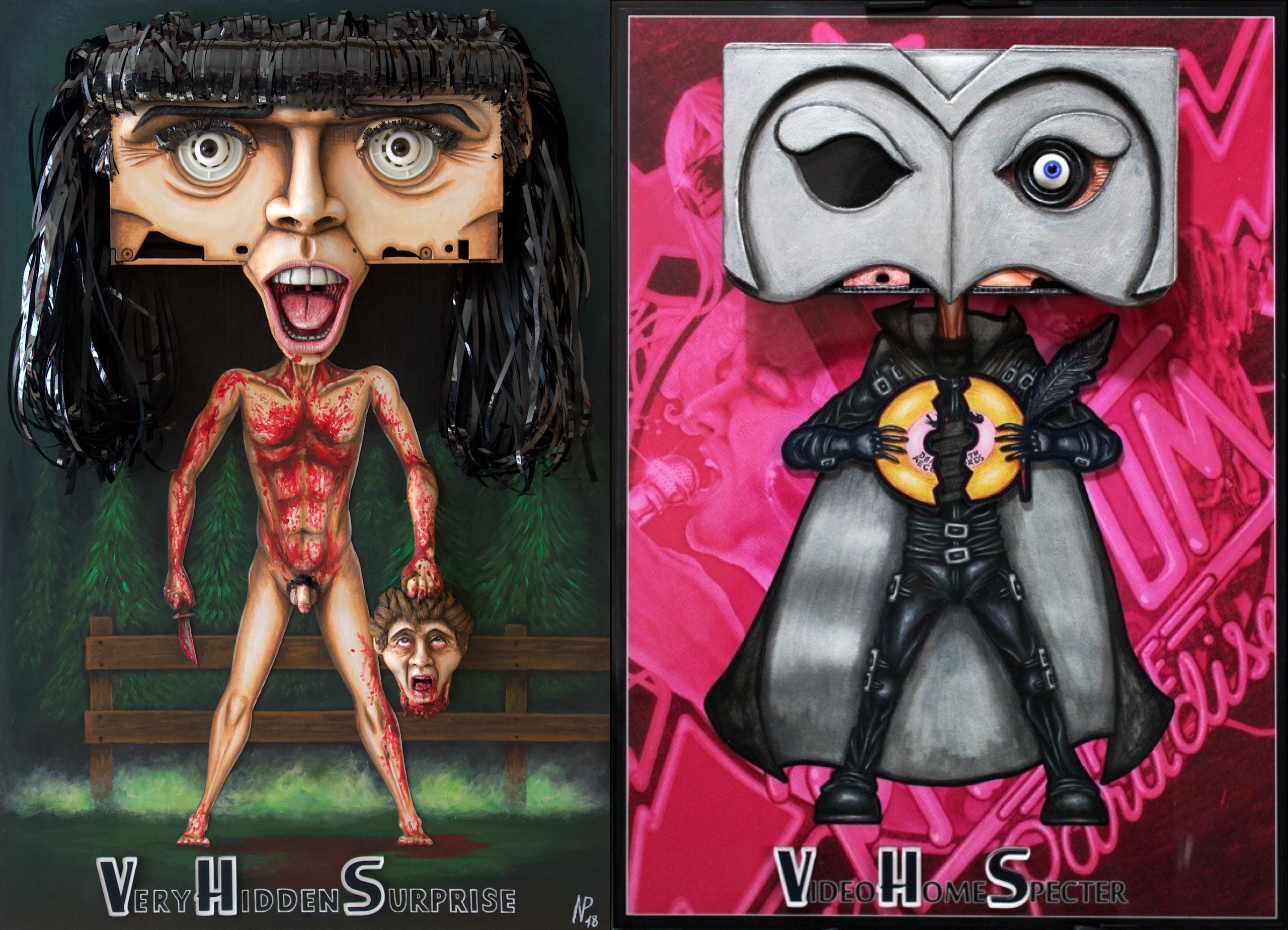 What first drew you to Horror?
Without a doubt, the posters in video stores and cinemas! I was six or seven years old when I saw Richard Franklin’s killer orangutan flick, LINK (1986). Long before actually seeing the movie, I had been bewitched by the little cardboard standee advertising it in the rental store window. I imagined all kinds of stories about the title character grinning out at me. At the time, I didn’t realize that it was a monkey in a suit! To me, that leering figure playing with matches was a sort of demonic baron out of a Gothic tale. And there was the enigmatic title written in blood! It was posters like that that made my imagination run wild!

Were you disappointed when you discovered the true nature of Link?
Honestly, I don’t think a young kid can ever be disappointed by his very first Horror movie. I loved LINK as a child, and still loved it when I saw it again years later as an adult on DVD. Richard Franklin is a great director, the story is cleverly written, Link, himself is creepy as hell, and the score just sticks in your mind forever. Add Elizabeth Shue and Terence Stamp to that mix…what’s not to like? 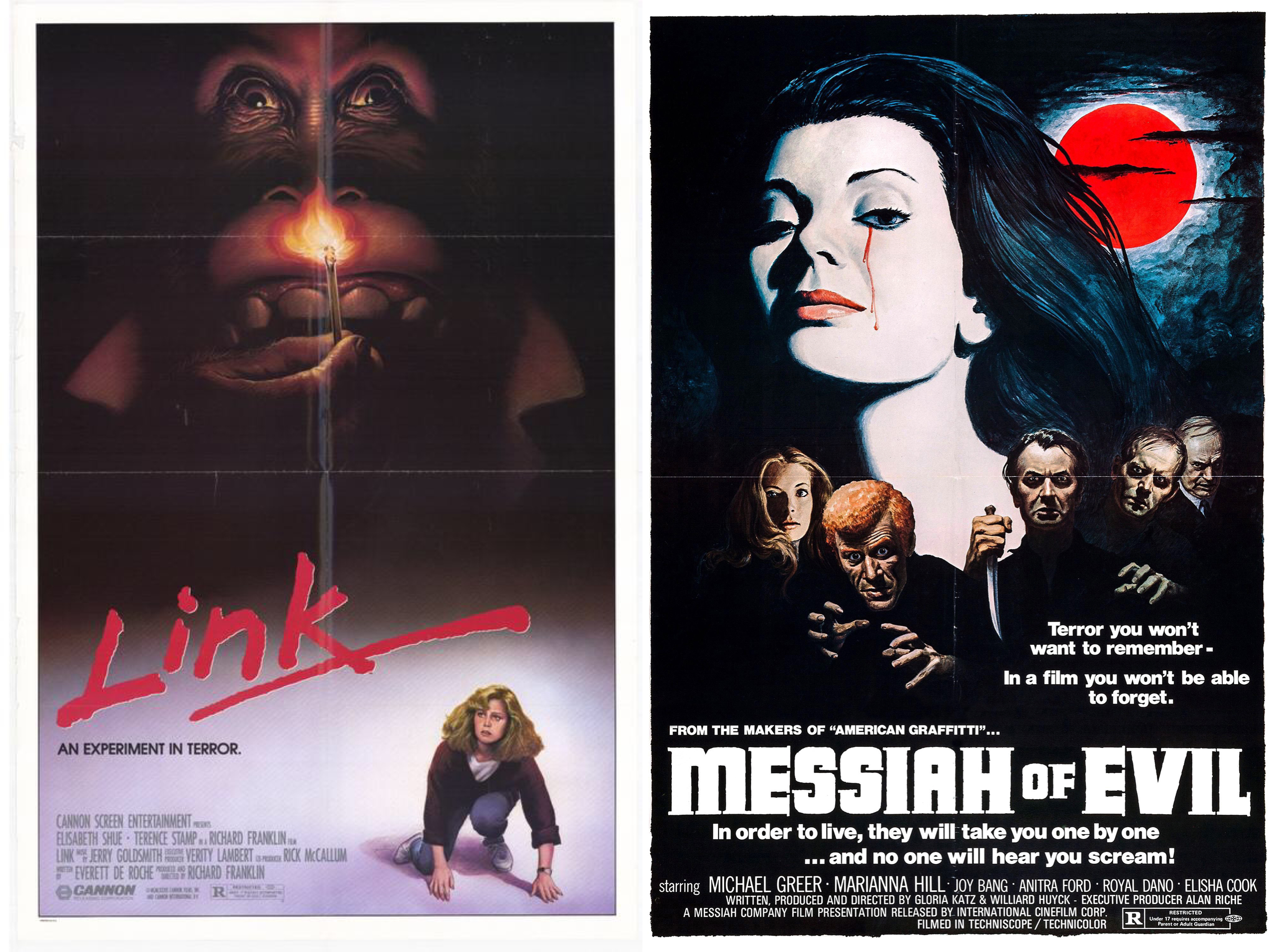 Who is your Horror muse?
There are so many! Whenever I want to get in the creative mood, I put on my three favorite movies: MESSIAH OF EVIL (1973), CARNIVAL OF SOULS (1962), or EYES WITHOUT A FACE (1960). So, I guess you could say that Marianna Hill, Candace Hilligoss and Edith Scob are my three muses.

What draws you to those films? They’re very similar in style and tone!
Yeah, they each have a very dreamlike vibe, which was their initial draw for me. MESSIAH OF EVIL is my all-time favorite and, in my opinion, it’s the perfect Horror movie. The scenes with Joy Bang in the theatre, Anitra Ford in the supermarket and the zombies jumping through the windows are among the scariest ever put on film. The locations are so beautiful, and the set design for the house is insane. The fact that it has never achieved the cult status of the other two is such a mystery to me.

CARNIVAL OF SOULS is almost a companion piece to MESSIAH. The ghost played by Herk Harvey scared the hell out of me the first time I saw it when it played on French TV for Halloween night. The music, Hilligoss’ acting and the atmosphere of the Saltair resort creates an exquisitely beautiful nightmare. Talking about it just makes me want to watch it again!

And of course, EYES WITHOUT A FACE is the ultimate French Horror masterwork! Before films like INSIDE (2007) and MARTYRS (2008) gained international recognition and ushered in the era of “New Extremity” a lot of people (even the French, themselves) tended to say that the country had never produced any quality Horror cinema. How can anyone make such an assumption when you’ve seen LES YEUX SANS VISAGE? All the actors are amazing, but Edith Scob steals the show and conveys such a wide range of emotions using only her eyes! And that final scene is one of the most poetic in film history. 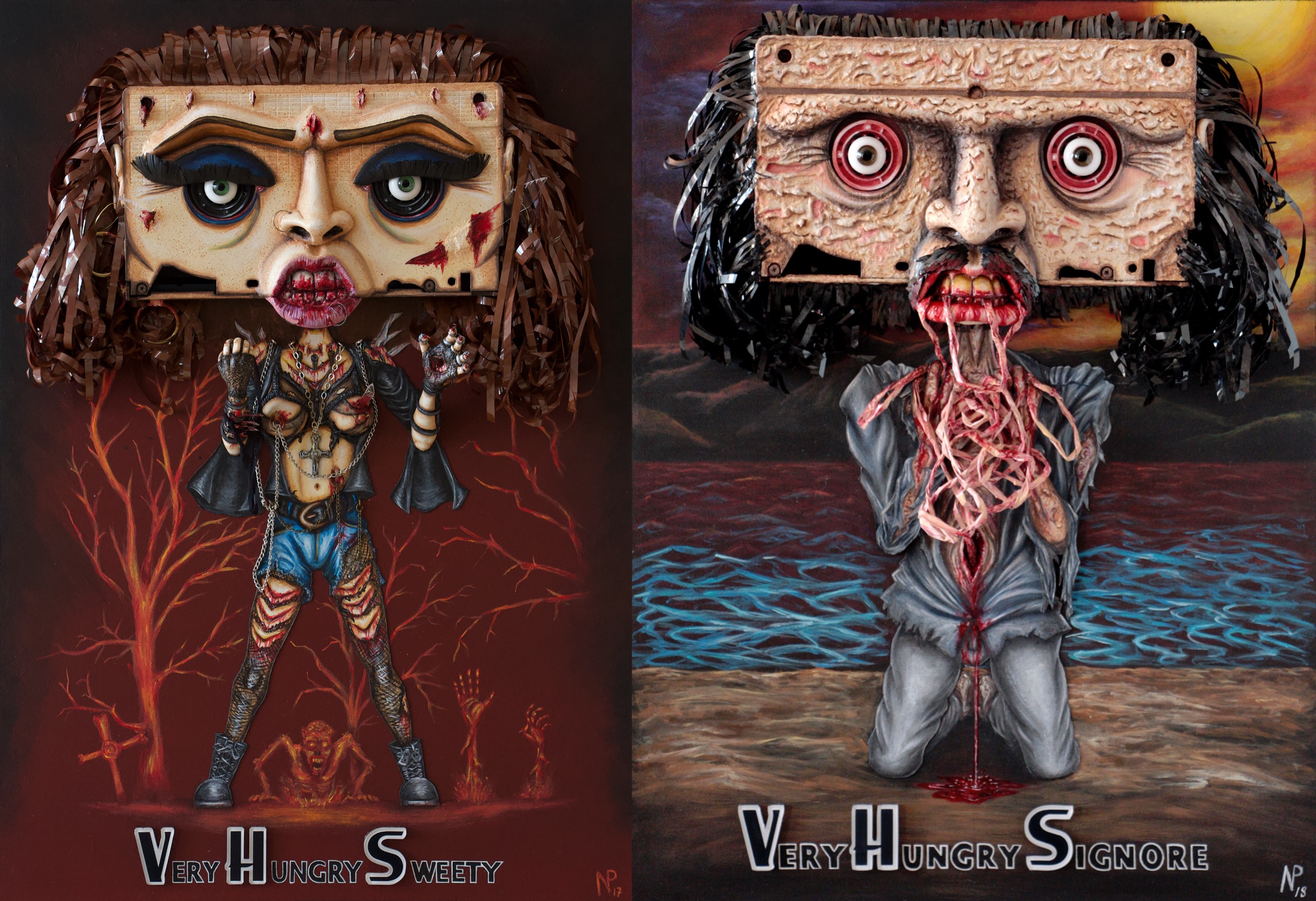 Was there a moment when you realized you could combine your two loves, Art and Horror?
My art has always been about Horror! Back at school, some of the teachers would reproach me for being too “Mad Movies,” a magazine that was, back then, the French equivalent of Rue Morgue! I guess they meant that I couldn’t help but bring twisted and horrific elements to any project I was working on. It’s just in my blood!

What’s it like to collaborate with your partner?
We almost always have our four hands on a project, and even on the rare occasion that one of us works alone on something, we frequently seek the other’s advice. Nan is Chinese and I’m European, so it brings great dynamism to our brainstorming sessions as we try to mix our different cultural influences. The VHS projects are mainly designed by me, but Nan brings a lot of her skills to the various stages of conception and construction. At the end of the day, we can say those “tapeheads” are our babies! 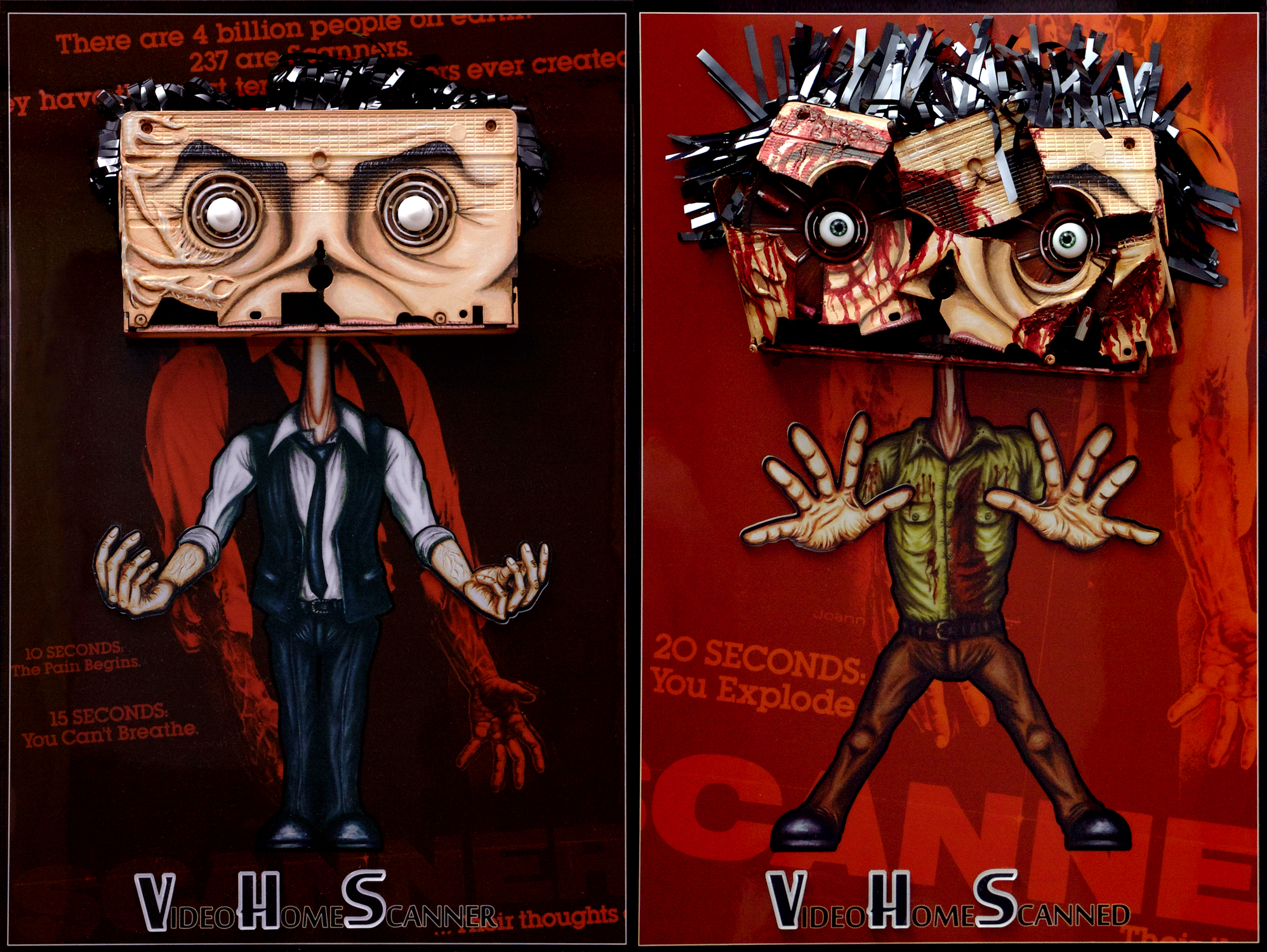 Can you tell us a bit about your creative process?
I always start with a rough sketch of the character in order to get a general idea of the posture, and then design what the head will look like. At this point, it’s also important to make a distinction between elements that can be salvaged from VHS parts and elements that need to be sculpted from polymer clay. I then simultaneously work on the body–which is drawn on thick paper and painted using acrylics–and the head. In terms of 3D elements, I don’t make molds because I want each piece to be wholly unique. I might make another version of a character, but it will be completely different from the previous ones.  If needed, once the VHS head is done, I add the hair which is made from magnetic tape. The staff at the DIY store in my area knows me very well and cut the panels used to make the backing boards perfectly to minimize waste. Being as eco-friendly as possible is important to me!

And before you freak out: at every convention we attend, there’s always one VHS fanatic who will come up and rip us a new one for “destroying” a precious copy of HALLOWEEN or ANTHROPOHAGUS! Being a movie collector myself, I never have and never will use a rare or collectible VHS to create these pieces…only Disney “Black Diamond” ones ; ) 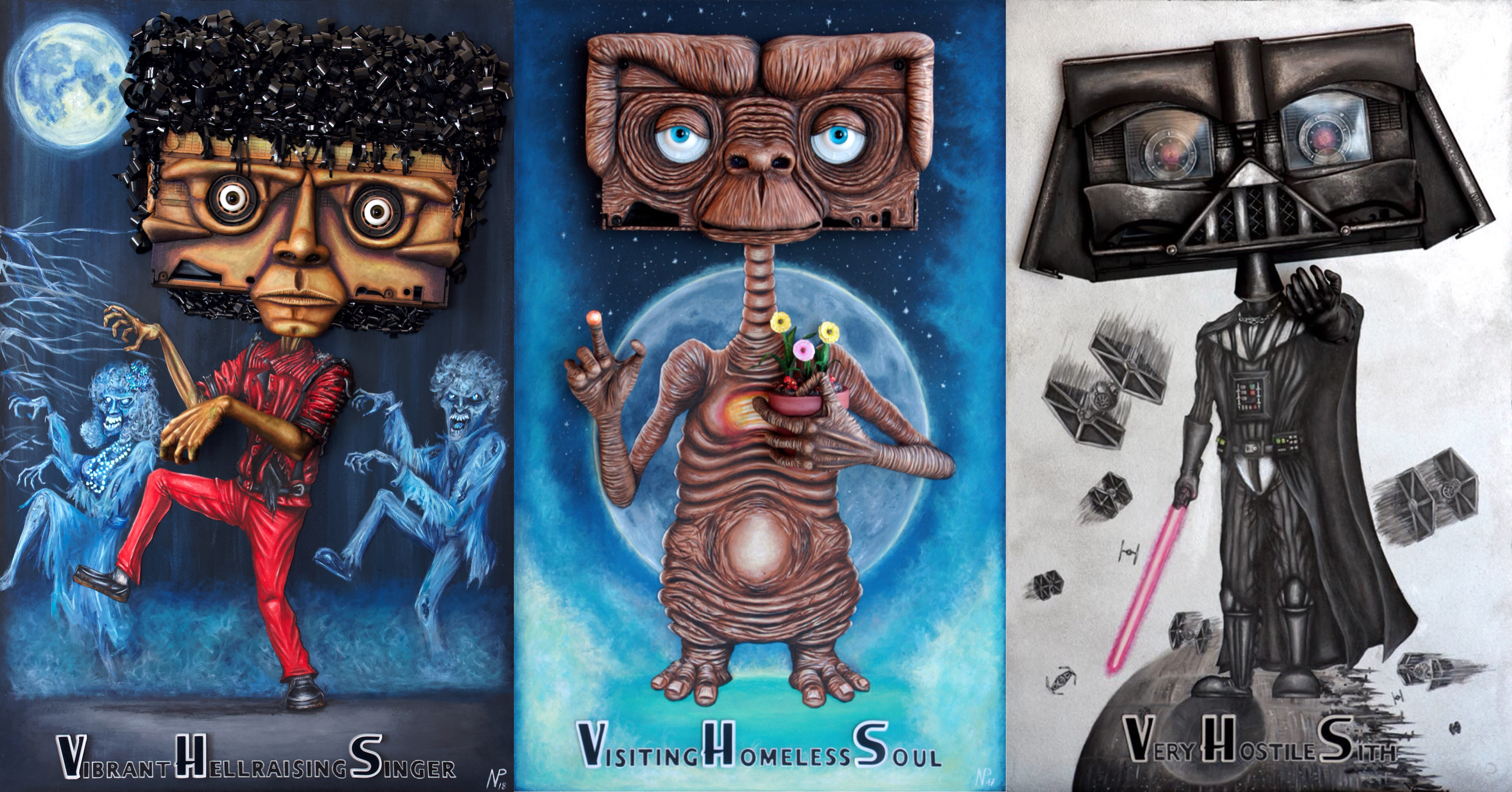 What’s your next big project?
We really want to bring the VHS medium to the next level! Bigger pieces with lights and animated mechanical parts! We also have some stop-motion animated shorts in the works that will take us back to our SFX roots.

I’m also on the verge of publishing Video Store Memories: a book that gathers most of our VHS Artwork created between 2014 and early 2018. In addition to the big, glossy pictures and some insights on the creation of the pieces, it will feature text by some friends I’ve made around the globe through this project. Among the people who contributed are: Josh Schaffer, Editor in Chief of Lunchmeat VHS, David Didelot, Chief Editor of French fanzine Videotopsie and author of an incredible tome on the late Bruno Mattei, and Christophe Petit, owner of Montmartres’ Le Video Club de la Butte, one of the last surviving video rental stores in France where Michel Gondry was initially inspired to make BE KIND REWIND (2008). It’s gonna be awesome!

Can you describe your artistic style in three words?
Vibrant. Horrific. Strange.

What has been your greatest challenge as a maker?
My greatest challenge so far has been my Darth Vader piece. As soon as I started working on it, I had dreams every night about struggling to complete it! I could have gone the easy route and sculpted most of his mask and helmet, but I really wanted to use as many VHS parts as possible. Three whole tapes and two boxes were needed to build the mask and helmet, but I’m really pleased with how it turned out.

Which piece are you most proud of?
I think it’s the ET piece that was commissioned last year. Not only was the character really interesting to reinterpret from a technical and artistic point of view, but it was also created for someone I appreciate deeply.

What would you like people to take away from your art?
During our exhibitions, the moments I enjoy the most are the viewer’s reactions when they come to realize the heads are made of VHS tapes, and the memories that rekindles. It’s great to see big smiles on their faces as they start talking to each other about their video store days or how they discovered their favorite Horror movie. If our little Tape Heads can transport you back, even briefly, to us, it’s a job well done! 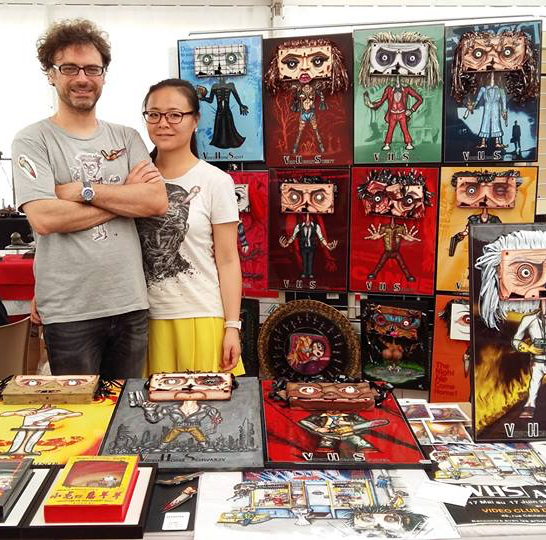