In a world filled with an increasing multitude of collectibles for even the most obscure films and franchises, it’s nice to see someone take initiative and create their own based on properties that are still overdue for recognition. Having spent years writing and researching horror-themed collectibles, Rue Morgue’s own James Burrell is proud to present his first three, fan-made, limited-edition sculpted goodies, called NIGHTMARE NODDERS (bobbleheads with attitude). James kicks off the line with a selection of masked killers from three of Canada’s oft-overlooked slasher classics, Prom Night (1980), My Bloody Valentine (1981), and Curtains (1983). James had this to say about more about his NIGHTMARE NODDERS:

“These three characters were chosen to kick off the line because I’m a big fan of the actual films: Prom Night, Curtains, and My Bloody Valentine. I am a huge fan of Canadian horror films in general. I wrote a book on the subject, Horrorwood North, which was released several years ago by Rue Morgue’s book imprint, The Rue Morgue Library, and have penned numerous magazine and online articles. I have also contributed to various DVD and Blu-Ray releases for these movies. So, I love these films and their characters and wanted to create collectibles based on them. Canadian horror cinema is vastly underrated and has never really received the respect that it deserves. There are nearly no collectibles made of these characters, except for the handful of custom items that other fans like me have made. It’s unlikely that mainstream toy companies would ever release a bobblehead of the Curtains hag, or of Harry Warden, or Alex. These films have loyal cult followings, but perhaps toy companies don’t feel there enough fans out there to warrant making figures or other collectibles” 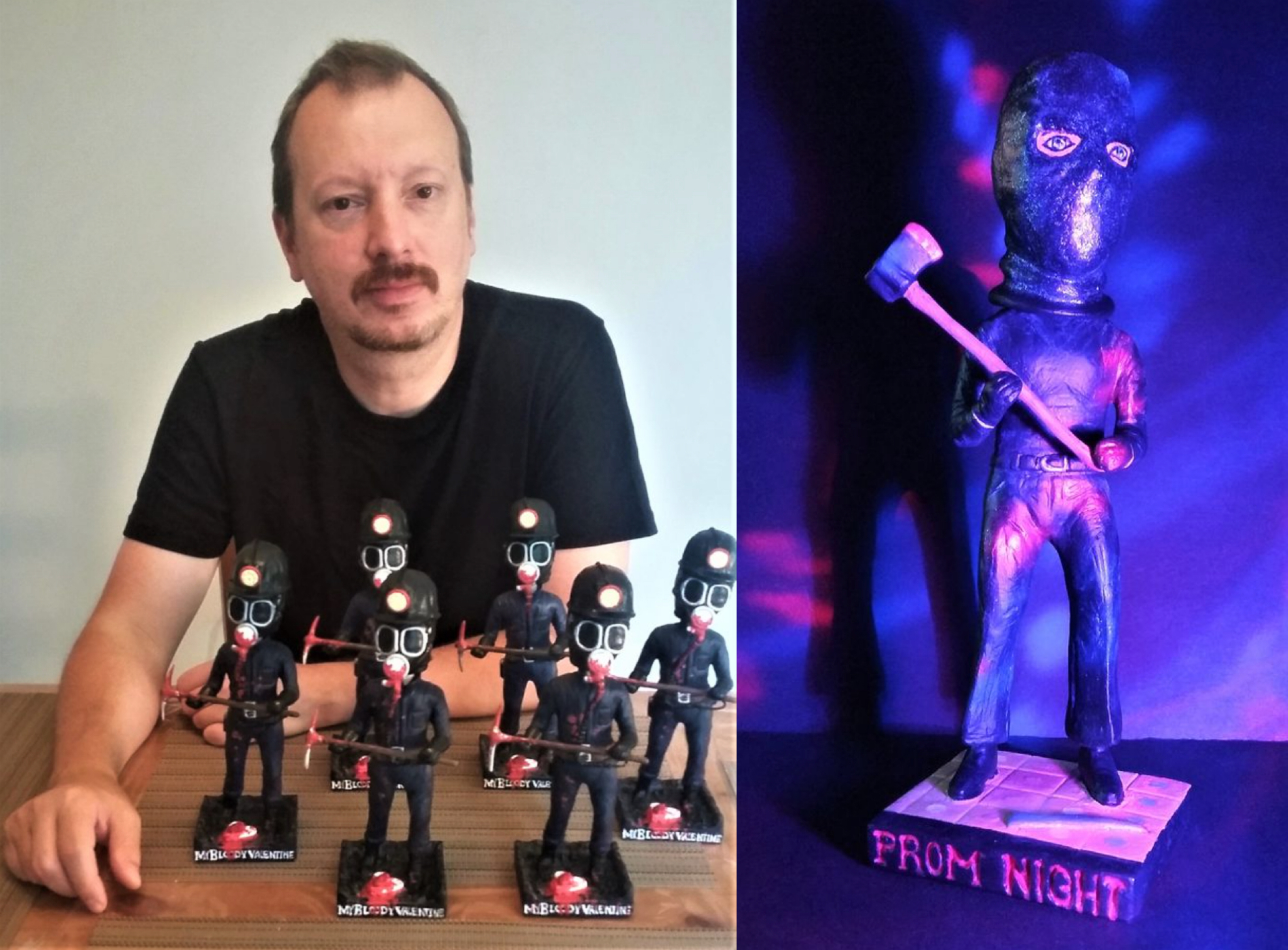 Now let’s get to the meat and potatoes, or bloodied ax and sickle, as the case may be. The Curtains Hag stands 8 1/2 inches tall with a frozen pond base, Harry Warden stands nearly 9 1/2 inches tall with a coal mine base (complete with a bloodied heart in a candy box), and the Prom Night killer stands 9 inches atop a disco dance floor base with broken “mirror” shard. All NIGHTMARE NODDERS are a completely hand-made and painted by Burrell. These aren’t dead-eyed Funko pops, these are labors of love! Made from durable resin, each Nodder is affixed to its base, which sports the engraved name of the appropriate film. Each figure is 100% film-accurate, and the Hag figure even has hand-dyed auburn crepe hair. Fans of these films will also notice that each character comes with the weapons they used in the films. Harry Warden wields a bloody pickaxe, the Hag has her trusty sickle, and the Disco Killer brandishes an ax with both hands. 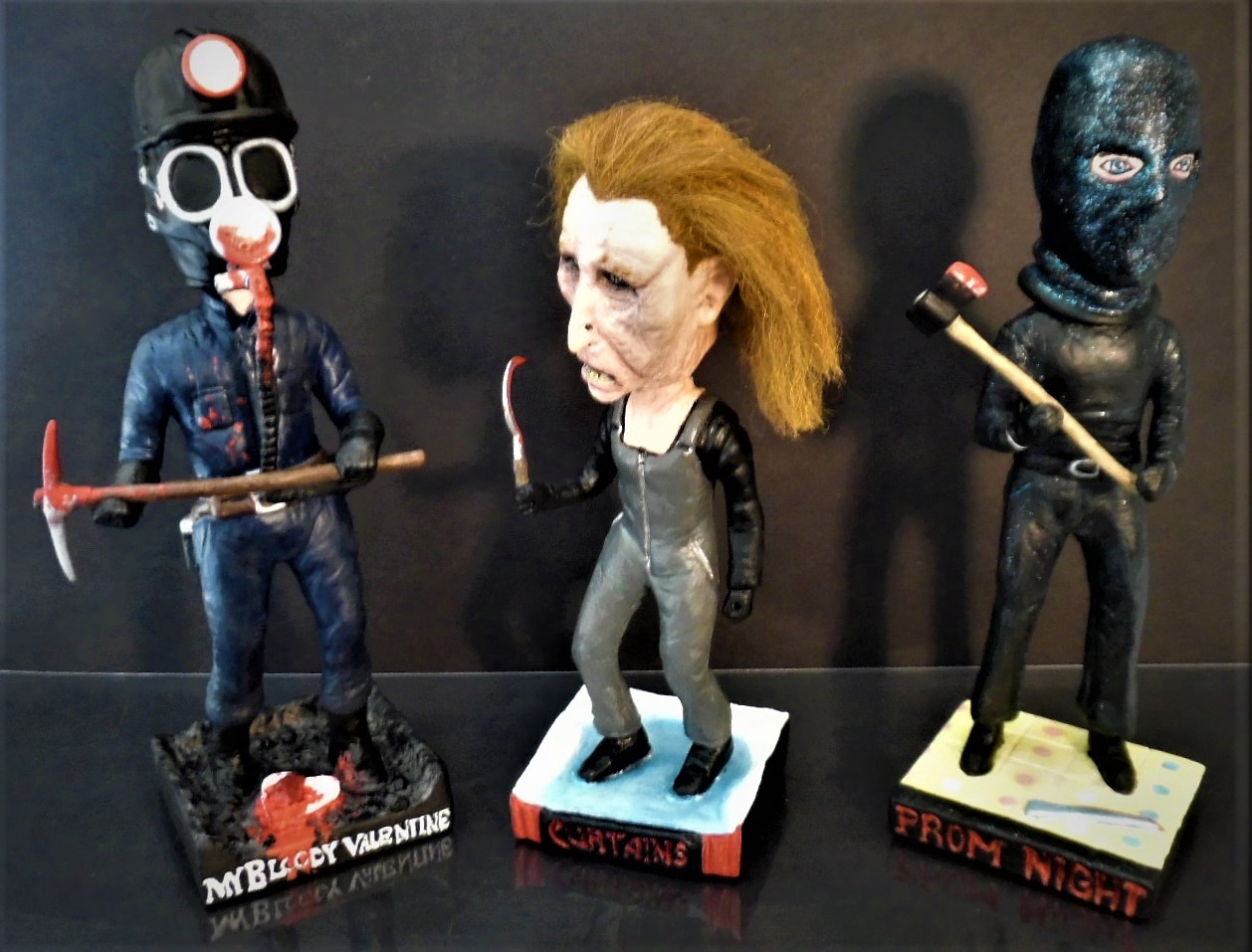 Burrell is aiming for a pretty sizable run for each figure, but since this is a one-man operation, it’s likely that they will sell out fast. According to Burrell:

“Harry Warden is going to be limited,  but I will be doing an even smaller run of [the other two]. The Hag is a bit challenging because of the crepe hair I use, and the several layers of paint required to get the look of the mask. So, I’ll probably be capping that one the most.”

Asked if he has plans to keep NIGHTMARE NODDERS focused on Canadian content, Burrell responds:

“No, I will be covering other films as well down the road. I have many other characters in mind that I want to make. I love the Roger Corman films, Hammer horror, Italian horror. I plan to cover films from the 1960s, ’70s, as well as a few other ’80s flicks. There are at least a dozen other characters that I can think of right now that I would love to make into figures.”

Pricing is as follows:
*Please also note that James will provide discounts on multiple orders (Please Inquire before ordering) 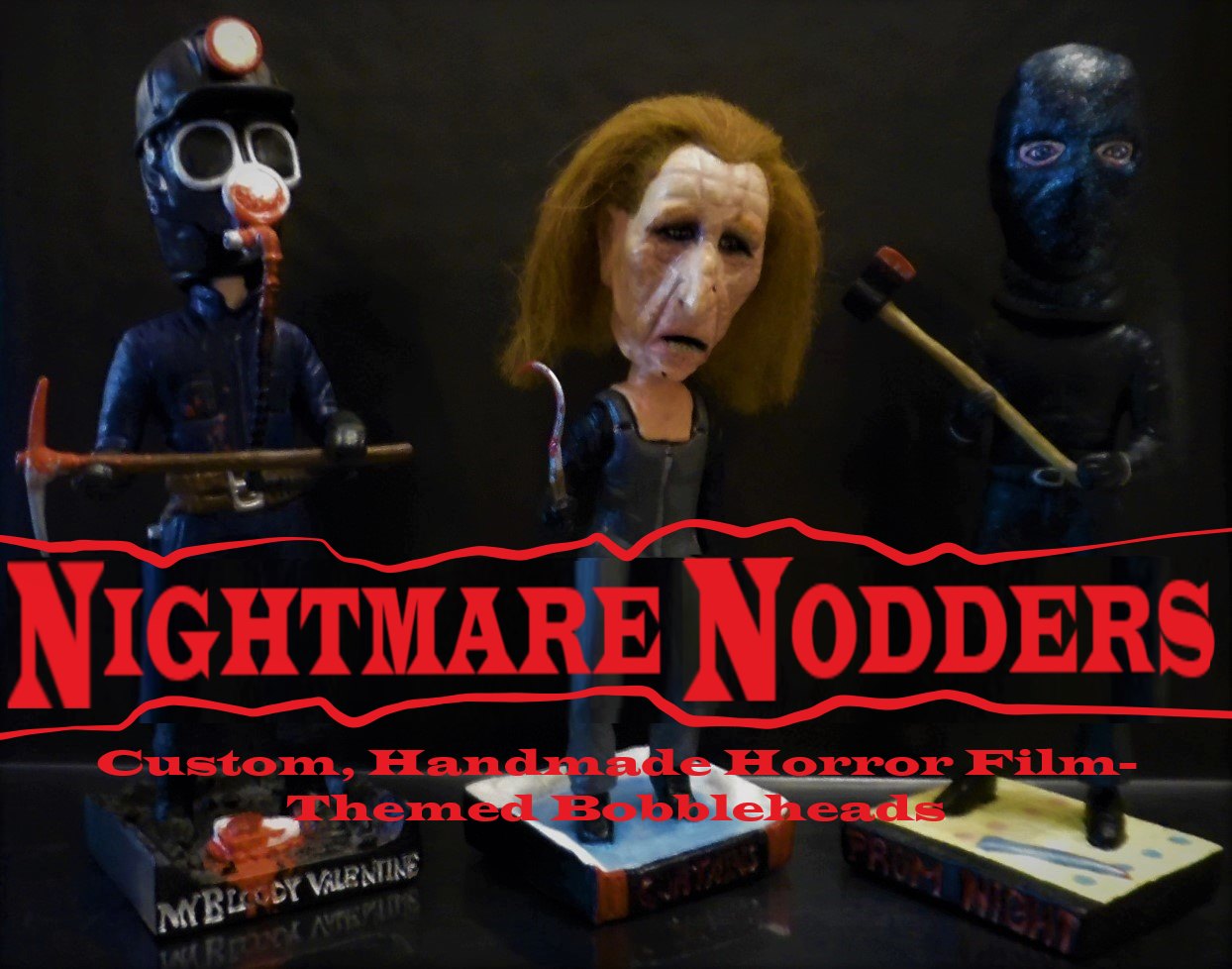