Interview: Getting Creeped Out With John Harrison.

For John Harrison, working on Shudder’s update of Creepshow is a homecoming of sorts, having worked on the original George Romero classic as both the composer and First Assistant Director. With the return of the franchise as a television anthology, Harrison now steps into the role of writer/director – a role he’s familiar with, having written and directed for both of TV’s Tales from the Crypt and Tales from the Darkside (along with helming the latter’s feature film). Here, he discusses his role on the new series.

How did you get involved in the updated version of Creepshow?

Originally I heard about the project from Craig Engler, the head of Shudder, while we were having lunch in New York one afternoon. He told me of his enthusiasm for mounting such a series as one of Shudder’s first original productions. Craig and I had worked together before when I wrote and directed the Dune miniseries for ScyFy Channel. He said if they got it going he’d like me to get involved. Of course, I said that I’d love to.

Then, about a year later, my pal, Greg Nictoero, called to tell me Shudder had worked out the rights and he was going to be the Showrunner. Shudder is owned by AMC, and Greg is an EP of their Walking Dead series, so besides his work with that show and all the wonderful movies he’s been involved with through his company KNB Effects, he was an obvious and great choice.

I’ve known Greg since he came to work for Tom Savini on Romero’s Day of the Dead. I was George’s 1st A.D. on that, and Greg quickly became part of the ‘family’. Then when I directed Tales from the Darkside: The Movie, the producers and I gave him and KNB one of their first big jobs, and they hit it out of the park.

We’ve been friends for all these years, and I knew he would honor the original Creepshow in the series.

“The other thing I learned from George, and hopefully brought to the table in the new series, was a sense of ghoulish humor. “

Your role on the original film was as a composer and A.D., and you’re now writing/directing on the new series – did you bring any of your experiences working with George Romero on the original over to your new role in the show?

Of course. But I have to credit Greg with insisting that we stay true to what George created. It’s a classic film for a reason, and I was thrilled when told me how he wanted to do the show. I’ve had a fair amount of experience with anthologies; Creepshow, Tales from the Darkside series and movie, Tales From The Crypt, etc., so for me it was like going back to my roots.

Greg assembled a fantastic crew down in Atlanta, all of whom understood what we were trying to do. And the icing on the cake was Rob Draper, our cinematographer that Greg and I had worked with in the past. We did my Tales From The Darkside movie together, among others, and his ability to create individual styles for each story was incredible.

So it was easy to transport myself back to my time with George and take all the lessons I learned about how to tell a “short story,” how to individualize each one – I directed four – and then, with Greg and Rob’s help, find a way to link them together so they all felt unified.

The other thing I learned from George, and hopefully brought to the table in the new series, was a sense of ghoulish humor. He was a master at finding the right balance between terror and fun. I hope he’s looking down and laughing. 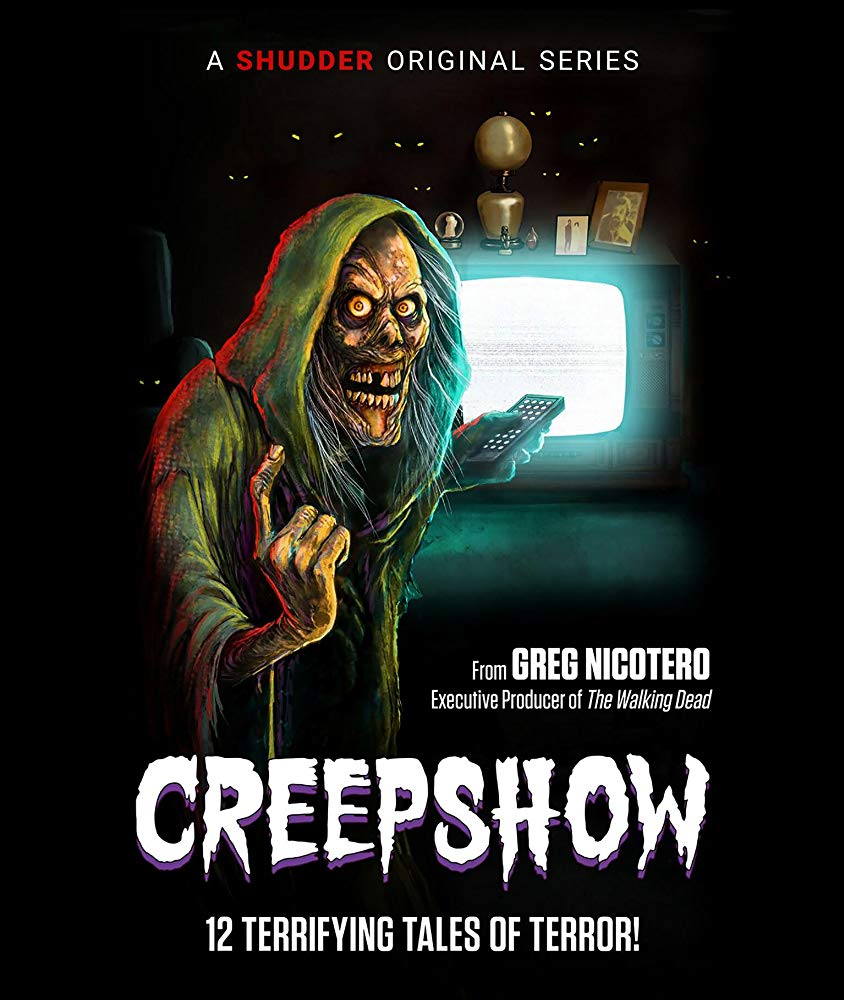 Creepshow follows the anthology format from series like The Twilight Zone and the old Amicus Portmanteau films – and these horror shorts and anthologies are getting a new lease on life with revivals of the old Twilight Zone, along with Scary Stories to Tell in the Dark. Do you think horror works better long or short?

I think the story dictates the length. Greg was very careful to choose stories that could be effective in a ‘short story’ format. I think that meant finding easily identifiable characters caught up in straightforward crises. There’s something really satisfying about a simple story, simply told, with a great catharsis in twenty or thirty minutes. I happen to love a good hamburger as much as a three-course steak dinner. And in the series, you can have a couple of burgers at one sitting.

What carryover elements from the film series might we expect in the new series?

Again, Greg has been insistent that we maintain the comic book style of the original, so the framing, the color, even the transitions between stories will be reminiscent of the original.

And if one looks closely, there are a few visual references to the original scattered throughout for those fans who are really paying attention.

Can you tell us a bit about your episodes without spoiling them?

I was lucky that each of my stories were totally different from one another – no spoilers here, but there is a particularly creepy tale about a little girl and the unexpected guest in her dollhouse. It’s completely different from another tale I did, a very noire-ish story about a gorgeous young woman on the run and the kindly undertaker who lures her into helping him reunite with his wife…who happens to be dead. There’s also a great Halloween story about a group of friends who have more than candy on their minds, and another insane story about a small Midwest town whose citizens get a rather unique and outrageous revenge on a tyrannical mayor and his henchmen. Nice and bloody, that one.

But without terrific acting that can make the characters real, no story can work. In each of my episodes, I’m happy to say that I had great casts who really got the tone and style of the show.