Anatomy of a Scream launches inaugural issue of Grim Magazine

What better way to celebrate Women in Horror Month than by giving a platform for the voices of women in horror themselves? Releasing its first issue in both digital and print, GRIM MAGAZINE is the brainchild of Anatomy of a Scream, and features essays, reviews, analyses, interviews and short fiction submitted by a collection writers who are passionate about the horror genre—all told from a female, LGBT-inclusive perspective.

In Grim‘s debut issue, Vancouver-born Gigi Saul Guerrero talks getting started as a filmmaker, personal influences, distinctive trademarks and plans for future projects. Other highlights include an interview with the creators of indie Canadian vampire gem Red Spring, an overview of the 2014 sleeper hit Starry Eyes, interviews with the hosts of The Rants Macabre and Rue Morgue‘s own Faculty of Horror, a list of upcoming female-centric horror festivals for 2018 and more.

While fans of academic style writing will definitely get a kick out of articles like Alejandra Gonzalez’s “Season of the Witch”, a brief history of the significance of witchcraft in cinema, and cover artist CC Stapleton’s “The Mind’s Iris”, a study of Italian cult classic Suspiria‘s hidden symbolism, others will find appreciation in articles by Ashlee Blackwell (creator of Graveyard Shift Sisters) and Joe Lipsett. Both provide much needed voices and experiences from minority groups within the horror community, discussing topics such the importance of visible representation in the genre and the impact of queer-coded characters in the horror narrative. Grim also features a vibrantly-illustrated comic by Toronto-based artist Derek Chow, an advice column for gothic therapist Countess Valencia and a spotlight on female special effects makeup artists. With such a vast range of topics to choose from, told from a wide variety of perspectives, there’s something to be found for every horror fan within the contents of Grim.

Grim is having its very own launch party on Thursday, February 22nd, 2018, hosted by executive editor Valeska Godot. The party will run from 7:00 pm – 1:00 am and takes place in Monarch Tavern (located 12 Clinton St, Toronto). Join the staff for cocktails, horror trivia, prizes, dancing and to chat with the writers!

You can visit the magazine’s official website on anatomyofascream.wordpress.com. 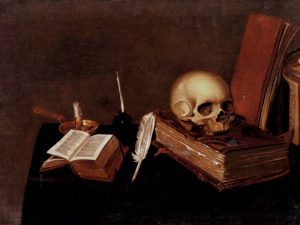