Seth Cooper and Brandt Hoffman of  Blueprint Gaming Concepts have a Kickstarter campaign up right now for a game that is a truly haunting take on real life crimes transformed into an enthralling tabletop board game. Crimes in History: H.H Holmes’ Murder Castle is primed to be an engaging action filled game that takes place in the hotel owned by notorious serial killer and fraudster Herman Webster Mudgett better known as H.H Holmes. Holmes built a three-story building in Chicago that included a hotel that was to serve as lodging during the World’s Columbian Exposition in 1893 (where the first Ferris wheel in the world was spotlighted). The building was filled with hidden areas, soundproof rooms, peepholes, mazes of hallways and chutes that led to the basement which served as a body disposal area housing acid vats and a crematorium. 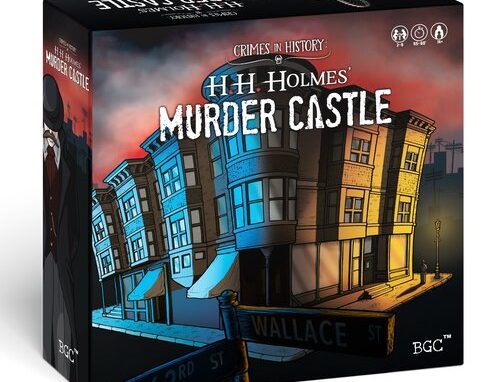 Illustrated by artist Holly Carden, two to six players can delve deeper into the strange and dangerous Murder Castle with a game time of around 45-60 minutes. The characters, some of which have unwittingly helped Holmes build his Murder Castle, must make their way through the different rooms and mazes in the hotel while collecting evidence to clear their names. Each player also has a singular unique ability that can only be used once per game. 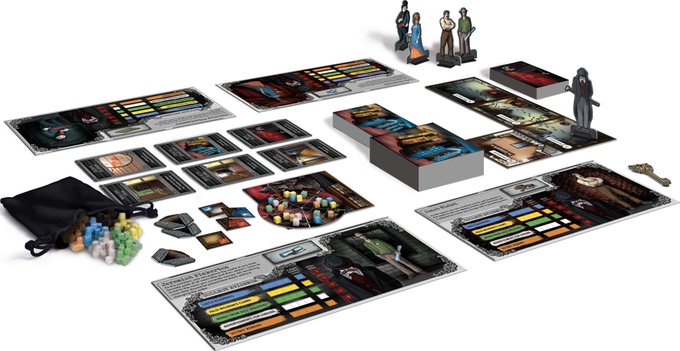 All players begin the game where this story began…at the Pharmacy where Holmes first got a job when he moved to Chicago in 1886. The winner of the game is the first player to complete their evidence board by collecting all of their evidence cubes and race back to the Pharmacy. Seems simple enough, but characters encounter booby traps like trapdoors, greased chutes to the basement, brick walls, and more. While players navigate these tricky rooms, Holmes can appear in any room with only a moment’s notice forcing players to drop evidence or divert their routes through the castle.

Draw from 79 event cards to gain a competitive advantage or to wreak havoc by sabotaging other players. The board can be built differently each time using the base game of 24 unique modular room tiles or 30 with second story expansion pack all inspired by the original castle’s blueprints. The expansion includes five new room tiles with special room effects, additional Holmes movement cards and even the option to play as Holmes. This play-as-Holmes element adds a semi co op game play element as players may occasionally need to work together to survive. The player who decides to play as Holmes will now have the ability to plant fake evidence, destroy real evidence, implement modified castle upgrades like deathtraps and even the ability to win the game.

To find out more and back this campaign, please head to the Kickstarter page, look for this game to start shipping September 2020 with delivery estimated for October 2020.